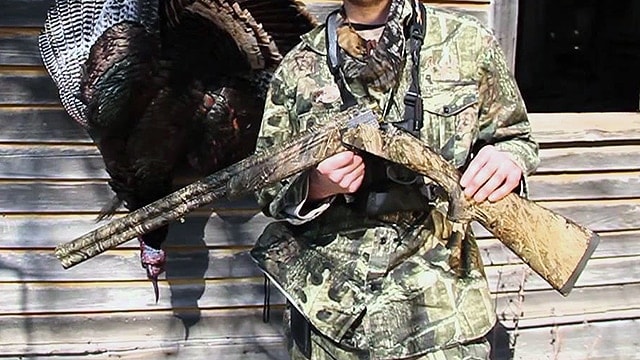 Though not the most common shotgun during Turkey season, O/U shotguns can actually make superb longbeard busters.

If you like to go against the grain, this one’s for you.  While pumps, semi-autos, and single shots undoubtedly account for most turkey kills by US hunters, I share with many others an unlikely love of O/U’s for spring gobblers.  Indeed, there are some very definite advantages to hunting toms with double (or triple) barrels, as seen in these three examples.

These O/U’s are well built for hunting with chrome lined chambers, a tang selector safety, interchangeable chokes, ventilated rib, sling swivels, and a fiber optic sight. Though retail price seems high at $640-$730 for a purpose driven O/U, real world prices are significantly lower, and there’s no reason you can’t multi-task with this gun the same as you can with most any O/U on the market.

The major benefit of hunting with a double barrel is the ability to have two different chokes in place, one for the 15-20 yard bird and another for the 35-50 yard gobbler.  The five included Beretta-style choke tubes make this a ready killer on both short and long range toms.

Mossberg proves time and again with decades of experience that guns don’t have to be expensive or purpose-built to get the job done.  If budget is your middle name, and O/U’s are your game, check out Mossberg’s Maverick line.  The most popular is the Maverick Hunter O/U with its 28” barrels in either fixed F/M or better yet, with interchangeable chokes.

Though the website indicates the HS12 now comes with chokes, the models we’ve seen are fixed cylinder bores.  If you acquire one with fixed open chokes, it will be paramount to know your range limitations in the turkey woods, but for the one-gun-buyer, it’s hard to argue against double duty home defense/tom-taker.  With 18.5” barrels and a tang mounted safety/barrel selector, chokes would make this banger an even bigger winner.

A load like Hornady’s Heavy Magnum Turkey, engineered to pattern best at range from a more open choke, may have potential here.

The best feature of the Mav besides the maneuverable stature?  The price, with Maverick’s on the market for under $400.

If you really, really want to go outside the box, check out Chiappa’s Triple Tom.  This is a purpose-built turkey slayer, but technically it’s not just an O/U, but rather an O/U/U.

The Triple Tom is a 12-gauge, 3.5” with a trio of 24” chrome lined barrels.  As with all of Chiappa’s Triples, the Triple Tom accepts Rem-style choke tubes, and with three barrels, offers the ultimate in customization for varying ranges and load choices.  The hard case setup includes five chokes, with three of them Extra Full Turkey as well as IC and Mod.  Other nice hunting features are the Realtree Green synthetic stock, mechanical trigger, sling swivels, and fiber optic sights.

The only downfall is the lack of a selective mechanism; rather, the gun fires in a right-left-top sequence.  But if you let go with three rounds of 3.5” turkey loads from this reliable action, well, enough said.  At 8.3 pounds empty, the gun is anything but lightweight, but that helps significantly with recoil.  With an overall length of just 41,” it’s a very wieldy Tom-taker.

The retail price over $1500 will put off many buyers of this specialty scattergun, but it’s nonetheless a fascinating, if unusual, option. 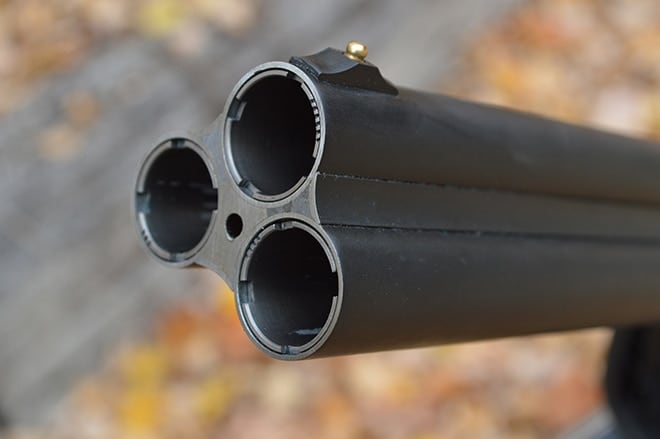 The major benefit of more barrels are the interchangeable chokes, which may allow for short and long range shots.

Though non-typical, O/U’s make perfect sense in the turkey woods.  Given the action type, even with the same length barrel as their pump or semi-auto counterparts, the overall length is shorter and more maneuverable in hunting situations.

Having multiple barrels provides multiple choke and load options, allowing hunters to account for both long and short range shots in one gun.  Sometimes thinking outside the box in terms of guns or calibers creates the most memorable hunts.  No matter the weapon you choose, get ready, because those Spring gobblers are waiting.