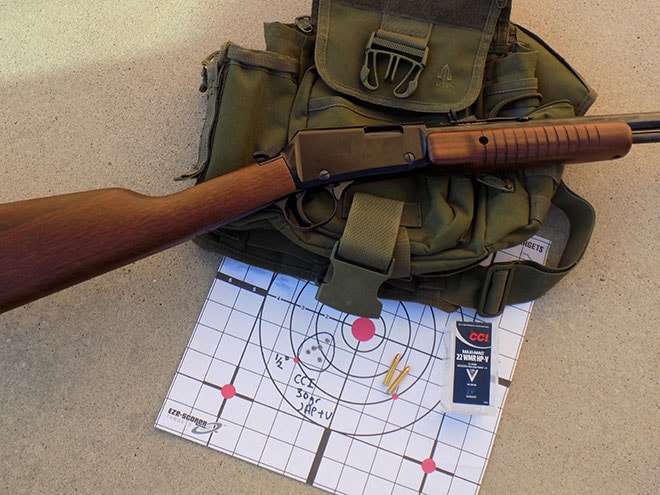 The pump action is as American as a gun design gets and while most prolific in modern shotguns, pump action rifles were and still are out there. One of the most prolific of these was the old Winchester Model 1890 that came in a number of 22 caliber rimfire chamberings. Once synonymous with shooting galleries and small game, the pump 22 has fallen by the wayside a little bit.

Yet, in such a loaded 22 rifle market, Henry Repeating Arms seems to think there is still a place for a pump action with their Pump Action Octagon Rifle in 22 LR and 22 WMR.

Henry is most famous for their lever action rifles, but the Pump Octagon 22 WMR I selected (check out my video here) lacks none of the fine finish work and quality materials.  At a cursory glance, Henry’s Pump Octagon looks very much like those old gallery guns – the 1890 and 1906 series that Winchester once produced – but once I got my hands on it, I felt what I think to be a more heavily built rifle.

The meat of the rifle is its 19 ¾ inch blued, octagonal barrel.  The barrel is fashioned from 1130 series steel and is topped with a Marbles semi-buckhorn rear sight.  The front sight is a simple blade with a brass bead set in it for contrast as you look down the barrel. It is a very traditional sighting arrangement, but the top strap of the alloy receiver has a 3/8 inch groove – perfect for mounting rimfire scopes. 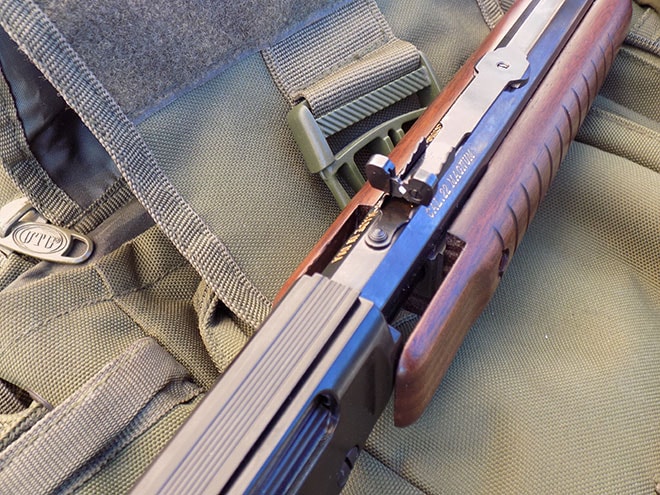 The Henry Pump is, of course, pump action. The forend, a fine piece of walnut with a generous girth and texturing, is pressed rearward and a single action bar forces the bolt rearward, cocking the hammer. When the forend is slammed forward, it picks up a round off the carrier and readies the gun to fire. If, for some reason, you want to eject a live round, simply press the knurled tab in front of the trigger guard so you can freely depress the action. The buttstock is also American walnut with a checkered hard plastic buttplate with a length of pull of 13 ¾ inches.

While the action is housed in an alloy receiver, all the parts under any stress are made of good, blued steel. There is only one safety feature on the Henry Pump, a simple half-cock notch in the hammer. 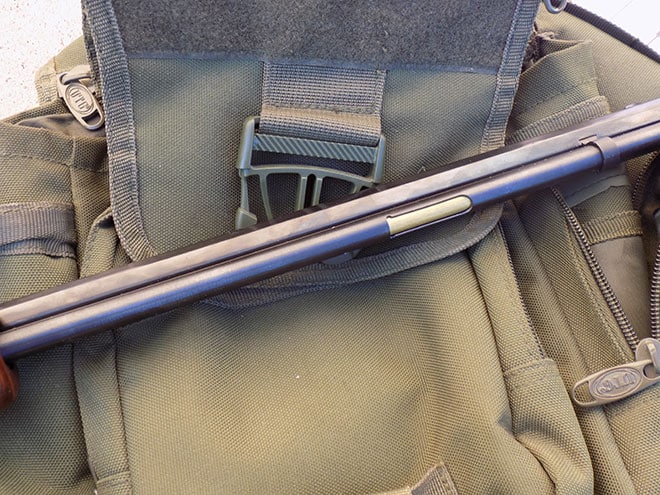 The Henry is tubular fed with the magazine housed below the barrel. (Photo: Terril Herbert)

Like all pump 22s, the Henry is tube fed by a spring loaded magazine under the barrel. The 22 LR version will hold up to 16 rounds, but the longer and more powerful 22 WMR – otherwise known as the 22 Magnum – holds up to 13.

The MSRP on a new Henry Pump is $550-590 depending on whether you get a 22 LR or a 22 Magnum version. This pricing is somewhat higher than what can be found on the shelves today and these rifles can be had in the neighborhood of $400. 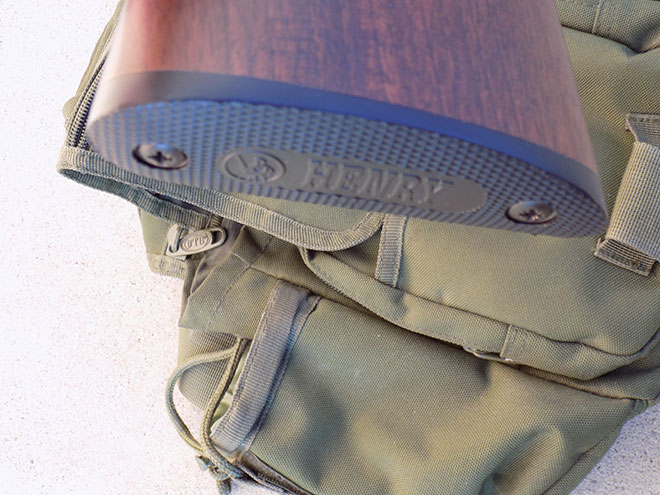 The Henry Pump Octagon is a classic looking and well fitted rifle that can definitely inspire much pride of ownership, but every rifle needs to be able to put rounds on target. So how does the Henry Pump perform?

On the range, I initially got started with a simple twenty-five yard sight in with my Henry Pump in 22 Magnum. The results were somewhat surprising. 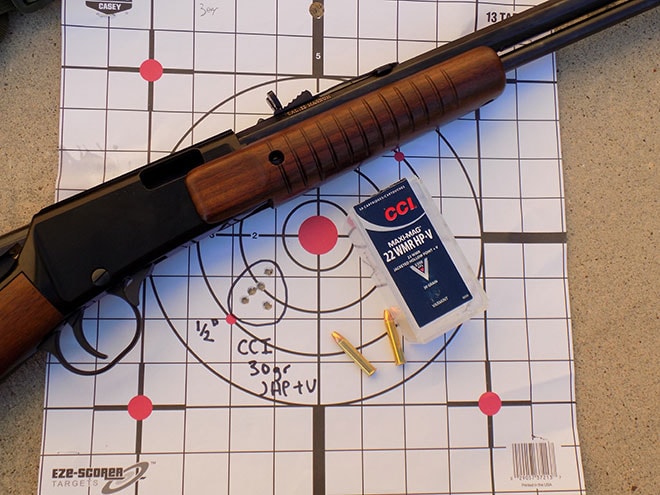 During the sight in, the standard 40 grain options I had available gave me somewhat mediocre accuracy, while the higher velocity varmint loads of 30 grain variety performed exceptionally. While, I lacked 50 grain fodder to see if the groups opened or tightened again, this exercise shows that every firearm will like a certain grain of bullet and certain brand of ammunition, especially determined by twist rate of the rifling in the bore.  With that settled, I moved out to fire on some more reactive targets and give the pump action a real workout. 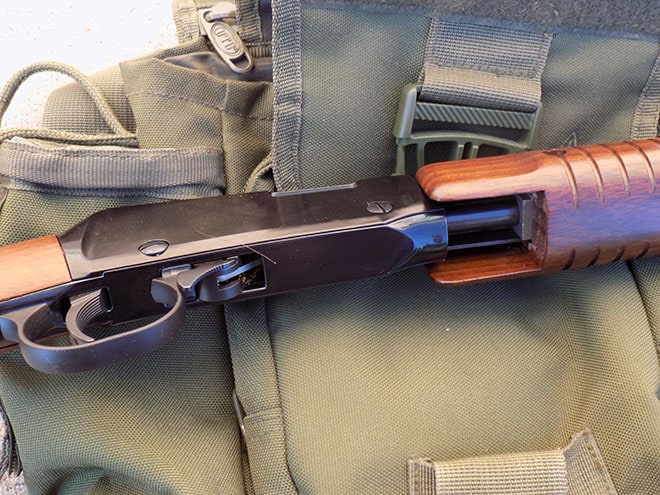 The bolt release tab is used to eject unfired rounds. Note the serrated trigger. It breaks very smoothly with no take up. (Photo: Terril Herbert)

Loading the Henry Pump is accomplished by clearing the action to make sure it is unloaded. Pull back on the forend to withdraw the bolt. If you can’t do so, you will need to depress the bolt release tab in front of the trigger guard. There is nothing wrong, but the bolt release holds the gun closed if it has not been fired. After verifying an empty gun, pull the knurled knob of the magazine counter-clockwise and pull out the brass magazine spring. Drop in the rounds and replace the spring. 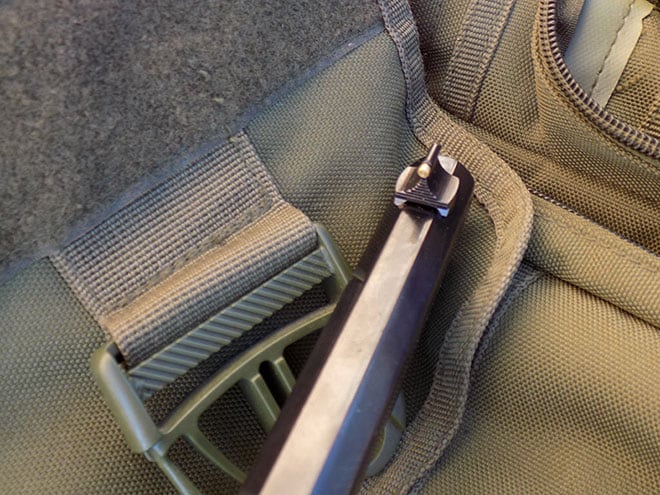 The front sight features a brass bead, but it is thick, making longer range shooting a chore. (Photo: Terril Herbert)

The factory sights are traditional in every sense with a nice fine sight picture at close range thanks to the lengthy barrel. The brass bead on the front sight is easy to see against targets of various colors. The checkered hard plastic buttplate made shouldering and working the action easy with no slipping. The length of the buttstock is clearly set up for a more adult sized shooter, but the gun’s light six pound weight means I could carry it with ease despite the lack of provisions for a sling.

Cycling the action is instinctive with a quick snap of the forend back and a quick snap forward, like any pump action shotgun. Compared to a lever action, the effort of the pumping motion feels a bit harder. However, running the action does not require the shooter to break their grip on the gun and I found that I could run this action much faster than a lever. With some practice, all thirteen rounds can be gone in a flash. 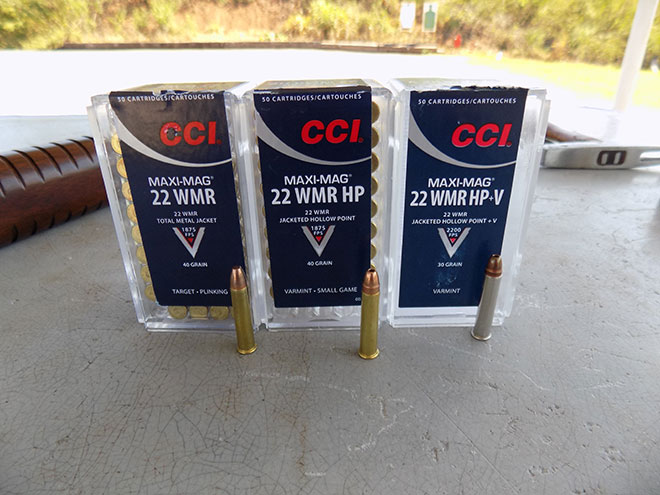 Out of the available ammunition, the Pump Action shot the 30 grain loads best. (Photo: Terril Herbert)

Reliability was mostly flawless with the exception of two instances where the round in the chamber failed to fire. This was due to the bolt not being fully closed after working the action a little too gently.

On sodas and a steel tree target at twenty-five yards, the Henry Pump brought out that county carnival feel, but put targets down much harder than any gallery gun of yesteryear. At fifty yards, the sights are still easy to pick up on a steel silhouette and I was able to make precise hits using all the loadings available to me.

The 22 Magnum cartridge offers over twice the energy of the popular 22 LR round, putting it close to some 9mm pistol loads. The 22 Mag also has the benefit of better bullet construction and flatter shooting at range over the 22 LR. 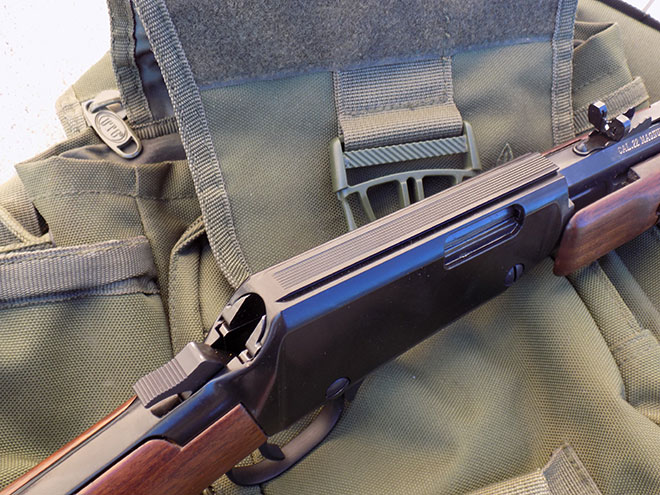 The dovetailed receiver allows for the mounting of a scope. (Photo: Terril Herbert)

Unfortunately, the semi-buckhorn rear sight and bead front are a bit harder to use at one hundred yards, well within the 22 Magnum’s reach. Hits were few and far between, but I wouldn’t categorize this as a fault of the gun. The traditional sights tend to cover up the target at this distance. Fortunately, the Henry Pump has a grooved receiver to accept scope mounts so you can get the most out of the cartridge.

A place for the pump?

Although the traditional sights are a bit of a handicap, as are the lack of sling attachments and ammunition preference, the Henry Pump is still a formidable piece of equipment that shot well and looked great doing it. I found myself wanting a centerfire caliber version in short order.  Like the Henry lever guns, the Pump holds a healthy amount of ammunition, comparable with a variety of semi-automatic rimfire rifles out today.  Despite the relatively slow process of reloading the magazine, the pump shines in cycling rate.  It can also fire various types of ammunition that would simply choke a modern offering that is more sensitive to cleaning and lubrication. That’s definitely something a modern shooter can appreciate.

In closing, the overlooked Henry Pump Action Octagon may not be as romantic as the lever gun of Western lore, but it is a well made send-off to the gallery guns of the county carnival era and is just as formidable of a rimfire platform as it was then.