Loading up for the pistol course of the Close Quarters Battle match hosted by Ontario Rifle Association on Canadian Forces Base Borden. (Photo: Andy C)

Despite the misconceptions propagated by the media, both domestically and internationally, Canadians own guns. We also like to compete with them. For those like myself fortunate to live close to some of our military installations, Canadians also have the opportunity to enjoy a unique shooting sport that has no parallel elsewhere in the world — the Ontario Rifle Association’s Service Rifle program.

The Service Rifle program has two intertwined but distinct disciplines: the Service Conditions matches, which are conducted at longer ranges, and the Close Quarter Battle matches, which are drills meant to enhance skills that could be required by soldiers engaging targets inside the 50 yard range. In this article I’ll be discussing the latter. 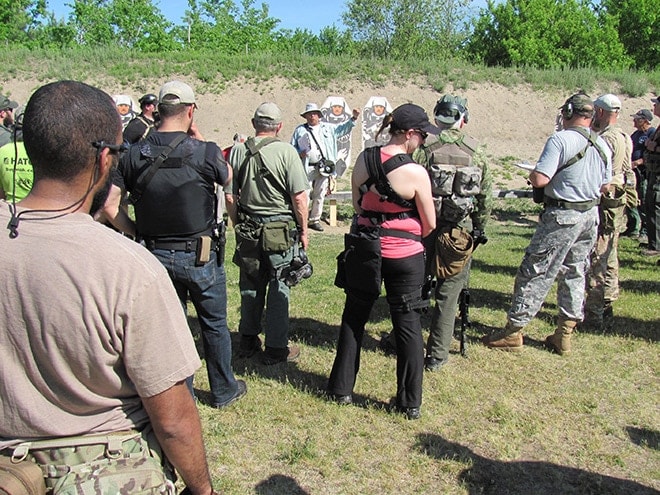 The most unique element of the Service Rifle discipline is the venue. Matches are shot on Canadian Forces bases, using Department of National Defense ranges, and civilians can participate alongside military teams. I’m not aware of any other country or program where this happens, and it adds a pretty unique feel to the shoots.

The CQB match began as a set of drills designed to improve the skills of soldiers engaging close-range targets. It’s translated into a four-match course of fire, each emphasizing different skills, especially reloading.

On the topic of reloading, in a CQB match expect to be doing a lot of it, regardless of your magazine capacity. Magazines are to be loaded to five rounds maximum. This has a dual purpose: one is that it forces a soldier to practice reloading frequently, and the other is that it helps keep things compliant with Canada’s regressive gun laws which enforce a five-round magazine cap for centrefire rifles. 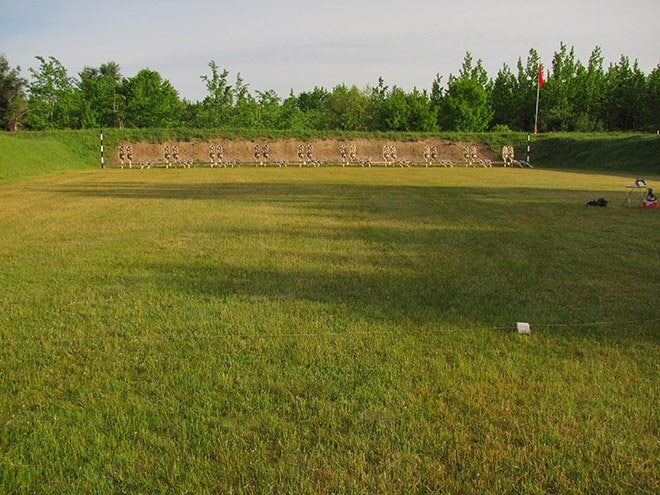 CQB matches are shot outdoors at Base Borden on the Amiens range, which is a collection of 100 yard deep action ranges. Figure 11 targets (the “charging Kraut”) are placed in sets of two, each corresponding with a Lane. Up to ten Lanes are set up in this fashion. Every range has two sets of targets so that after each shooter finished, the targets can be swapped out, patched, and scored to save time.

The range then has a series of strings laid down to mark five-yard intervals, as well as an active range line, beyond which shooters are required to wear eye and ear protection, at 50 yards. From there, alternating coloured lines are set at the 35 yard line every five yard up to five yards from the targets. 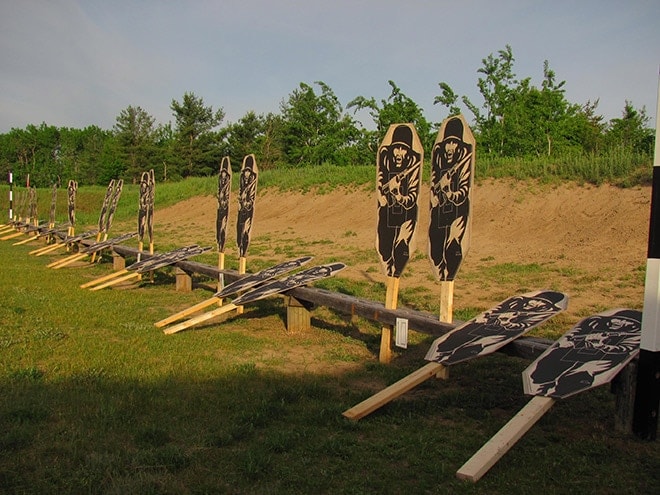 Many lanes mean many competing teams, both military and civilian. (Photo: Andy C)

Shooters are then organized into Lanes and Relays. Lanes designate their targets and firing arc, and Relays designate the group of people who will be shooting with and serve as a safety observer and scoring official. This means shooters will be able to fire simultaneously, allowing larger numbers of people to participate in actual shooting for longer periods of time. After the squadding is finished and the range is set up, there is a safety briefing and the match begins.

A CQB shoot consists of four “matches.” The match is a combination Bullseye and action shooting sports in that the courses of fire are always the same, multiple shooters are active at once, and shooting is done in timed exposure windows. But it takes cues from modern action shooting sports in that the windows are short and there are varied shooting positions and movement. This unique combination makes for a highly accessible sport that retains a high skill ceiling, and also allows for a lot of shooting.

The format of CQB matches allows for participants to remain active and shooting all day. (Photo: Andy C)

In CQB, a shooter is also always accompanied by another competitor from their target lane to act as a safety spotter. The range is overseen by a head safety officer who has two additional officers, one on each side of the range. This creates layers of safety redundancy, where a safety spotter directly behind a competitor can help nip safety problems before they become dangerous. 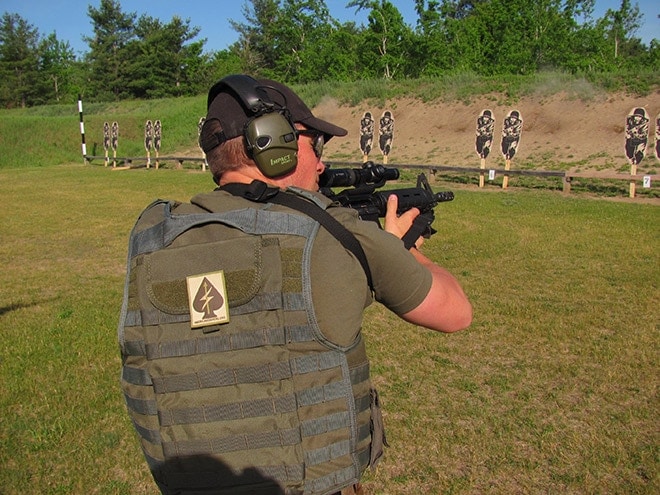 This means that a competitor is virtually never idle. You are either shooting, scoring and patching, moving targets back and forth from the stand, or loading your magazines and preparing your firearms and equipment. It makes for a busy day, but also one without the usual 1:100 ratio of time spent actually shooting to idling around that many other action shooting sports feature. By keeping you constantly engaged, the CQB match also goes by quickly.

A CQB match involving 40+ competitors lives and dies on smooth administration, and this responsibility is like the safeties in that it trickles down from the head safety officer to the shooters and observers. If a shooter holds up the line, his safety observer is encouraged to speed him up. If a rifle is malfunctioning preventing it from being safely cleared, it has to be pulled from the match. If somebody is too busy with talking about their rifle instead of shooting it, they have to be put in line, because if one gear grinds to a halt, the whole match can end up being stalled. 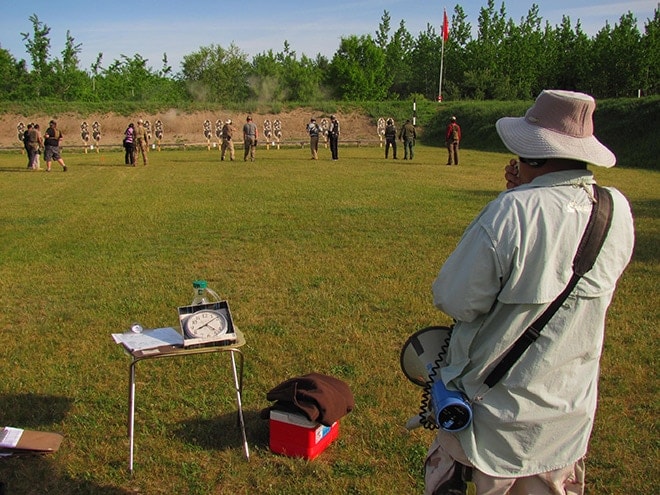 A head safety officer acts as the match’s brain and directs the other layers of safety. (Photo: Andy C)

During the match, the head range officer will issue commands on when to load, unload, what the shooter is supposed to do, and times the exposures during which a shooter is permitted to fire at the targets. Because of the number of shooters and noise, there is a degree of leniency with a late shot after the whistle signifying to stop shooting, but repeat or egregious offenders are disqualified. The head range officer is the brain of the match as a whole, and are highly active throughout the match.

If you’re interested in seeing the course of fire for a CQB match, click here to view it. 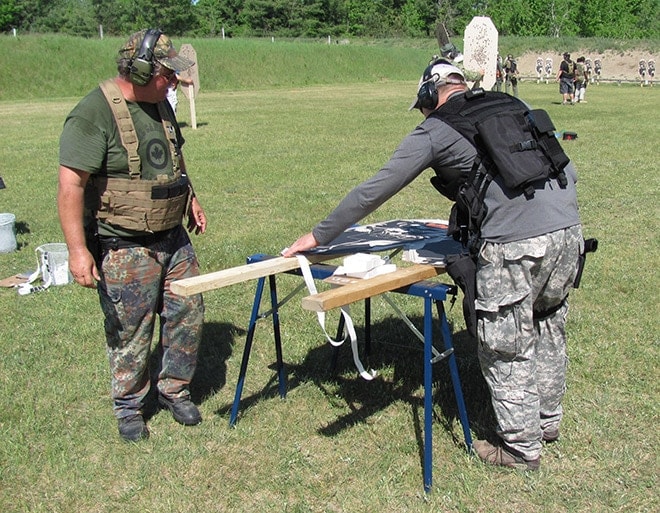 Scoring in CQB is simple: the closer to the centre of the Figure 11, the more points a shot is worth. The highest scoring area is five, the lowest is two. With pistol shooting to the head, a shooter must score a headshot for the body shots to count. After scoring, a target is patched and returned to the end of the range for the next shooter. Additional hits on a target (meaning excessive rounds fired) result in a high score hit being dropped for a lower score hit.

While this discipline is currently unique to regions of Canada, it is easily translated on to other shooting ranges. But why bother when you could organize a friendly 3-Gun or IPSC match? 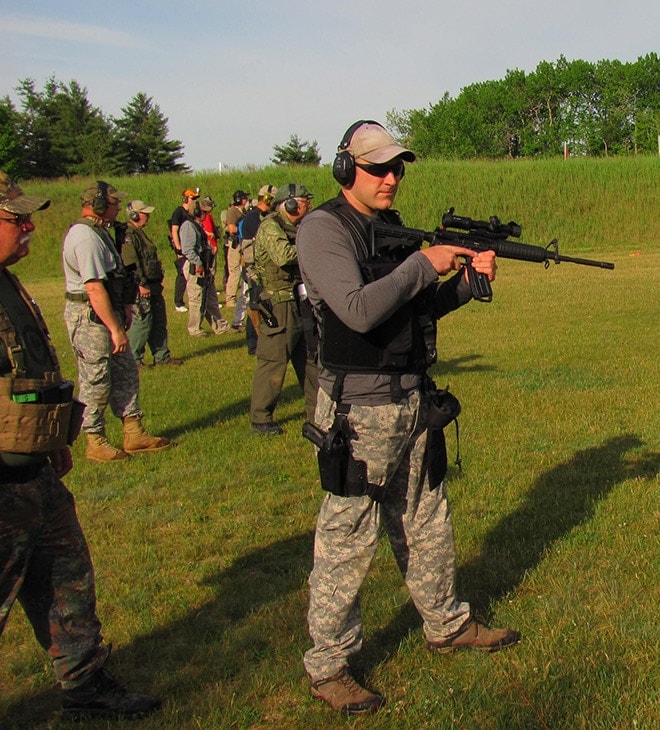 Competitors line up at a CQB match. (Photo: Andy C)

First, the logistical considerations. A CQB match can have 40+ participants shoot about a hundred rounds in a single day of shooting, and keep them occupied the whole time. The sheer amount of range time and rounds fired in a CQB match is unparalleled in action shooting.

Another bonus is a low barrier to entry. All a shooter needs is a pistol, rifle, ammo, magazines, a holster and a sling. No special qualification (like a Black Badge or equivalent) are required. All types of firearms are welcome (but magazine-fed rifles certainly fare best). If you want to get a good turnout of fresh faces to the competition shooting scene, a well-advertised CQB match is likely to be the ticket.

Finally, a huge perk is that the sport is easily customized to accommodate your own ranges’ capability. Don’t have a ten-lane, 50-yard deep action range? No problem — by scaling targets down and reducing to less lanes you can still have a good CQB match with plenty of participants. Don’t want to use handguns? Go ahead and drop those portions of the matches. The style of shooting is logistically easy to accommodate. Competitors lie down at a CQB match. (Photo: Andy C)

There are, of course, a few downsides. The biggest one is that rule enforcement largely depends on the participants observing the spirit of the rules, and their safeties being willing to call them on cheating (such as carrying excessive ammunition or shooting after the ceasefire whistle). The rules and timing aren’t as hard and precise as IDPA or Bullseye, but cheaters need to be aggressively weeded out, especially if scoring collusion is suspected. And enforcing this can be uncomfortable for some people.

The other drawback is the static course of fire. Variety is the spice of life, especially in shooting sports, and some participants might tire of the same match over and over. In that case, provided participants agree, you could always change around the matches, or you could just as easily shoot another discipline. All shooting sports have their drawbacks. 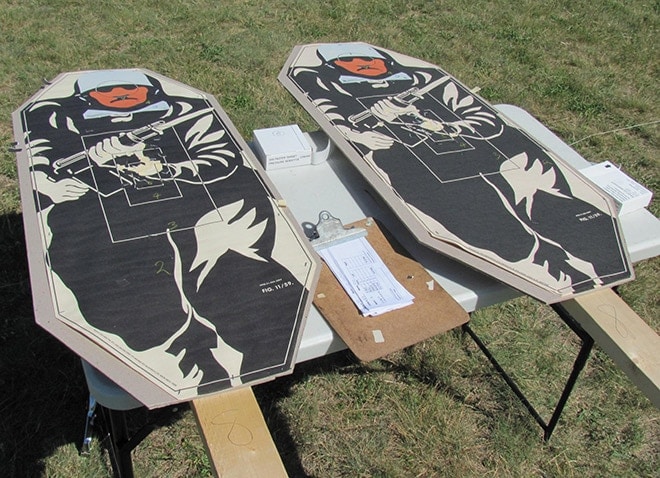 Service Rifle CQB matches are a great time that offers something different from the most popular shooting sports and lets pretty much anybody enjoy a competitive shooting match. The logistics are relatively light, the number of participants is high, and the courses of fire are easy to follow. If you think you can find a range and some volunteers, I recommend trying to import this uniquely Canadian sport to your own club.