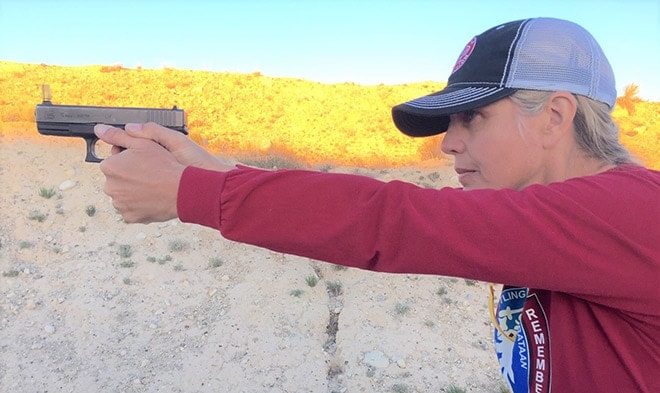 The author engaged in her passion and profession. Despite being labeled, the fastest growing demographic in the gun community, women have always been shooters. However, this may be the greatest time in history to be a gun gal. (Photo: Team HB)

By the account of countless local gun store owners, hunting organizations like National Wild Turkey Federation, and general industry buzz, women are usually named as the “fastest-growing segment of the industry.” Indeed, women in America have used guns and enjoyed shooting since guns began to be used for home and national defense and hunting.

Although it’d probably be relatively easy to do, I know of no academic or market-based research on women and the gun industry that accounts for this growth. Available surveys have focused only on women who hunt.

The difference between generations past and today in terms of girls and women being involved with guns appears, to me, to be the entrance of new populations into gun ownership. The growing presence of indoor ranges in urban areas would support this theory. Personally, I encounter many new female gun owners of every walk of life who are interested in guns for self-protection, with an interest in hunting or competing sometimes following as experience with firearms deepens.

In all though, I do feel it’s the greatest time ever to be a gun-loving female, and here are my three main reasons:

Countless articles and posts bemoan the difficulty of finding a carry method for a women’s physique. In reality, we have all the options men do plus a few more. Now, I’ll admit that selecting a safe method might preclude some products, but even with those eliminated, our choices still outnumber the guys’ pickings.

In addition to the number of carry methods available to women, like purses and bra-mounted models, style and finish choices include all those plain black and brown numbers in the traditionally male market, and a plethora of styles and colors to fit your taste and wardrobe—although I do believe that concealed means just that, an attractive holster or gun can bring just as much enjoyment as that perfectly-fitting yet beautiful bra and panty set, and unlike the undies, will probably last a lot longer.

2. The industry has laid out the red carpet for females

Ladies of all ages are involved in shooting sports, hunting, self-protection training, recreational shooting, and professional military and law enforcement shooting at a level that, if not unprecedented, is being publicized more than ever.  The firearm and related industries, and even governments, have responded by creating female-focused products and policies.

The growing presence of women’s hunting wear and guns customized for women by big names like Savage and Weatherby is proof the industry is paying attention to female buying power. While I’ve been known to rant about inferior or hard-to-operate guns being marketed to female first-time pistol buyers, the effort to cater to the market doesn’t go unnoticed. Although many women, myself included, prefer wearing functional (read: men’s) clothing for hunting or range time rather than items from the pink-it-and-shrink-it market, having girly options available certainly makes gun ownership and use friendlier and less of a cultural leap for newcomers.

There are women’s shooting clubs, plus women-only training events and hunts available in many communities. The desire to learn a useful skill or enjoyment of outdoor recreation in a non-competitive environment are typical motivators for new shooters. In my observations as an instructor, many women have been unwittingly discouraged from shooting by well-meaning male companions who showed them inappropriate techniques or failed to recognize impending pain, like a thumb behind a pistol slide or not securing the butt of a long gun into the shoulder. Neutral input from a supportive instructor or friend can help a motivated but intimidated new shooter blossom. One program that does just that is the Ladyseed aspect of the Appleseed rifle marksmanship program.  It’s a great way to learn rifle marksmanship and the role of ordinary women in the founding of the United States.

Role models and companionship are easy to find at every level of shooting. Six-time Olympian Kim Rhode has shown the world more than multiple record-breaking performances, she’s also called politicians out on misstatements about ammunition restrictions. Shyanne Roberts has made headlines as a very young and competent three-gun competitor. Anyone who carries a gun as part of their job or for personal defense can find inspiration in the story of Los Angeles Police Department Sergeant Stacy Lim, who mounted an effective armed defense in response to a would-be carjacker. The attack occurred when she was in her personal vehicle, off-duty.

An informal, verbal survey of local, licensed civilian gun carriers has revealed an interesting trend in the year 2017. Women have been more likely than men to say they carry on a daily basis, at more places than just the car. It’s an interesting trend from which several theories of “why” could grow.

Firearms will always carry some association with manhood, a deserved inference considering that officially armed forces are, historically, mostly male. Despite society’s tendency to pigeonhole roles and the associated tools, women have always been part of the gun scene, filling usually unsung roles as snipers, home defenders, infantry soldiers, police and detention officers, and more. Although a female may feel as if she’s stepping out alone into a new world by purchasing or using a gun, she’s really setting out on a worn and mostly welcoming path. Any dissuaders who appear on the way, as they will on any worthy pursuit, are only a test of her resolve.