The world of lever-run shotguns is certainly not new.  Winchester and Marlin have been doing it for decades, though most of those guns are long “obsolete.”  Accordingly, there was much hubbub when Henry announced the introduction of a pair of 410 lever action scatterguns for 2017.  Though they’ve been shipping for a few months, demand far exceeds production.  We had a chance to get our hands on one of the first guns off the line, and while we spent plenty of time at the range, clay thrower and patterning board first, what better way to test the guns mettle than on a hunt?

As part of their “outside the box” design campaign, Henry added a pair of 410 lever action shotguns to their heretofore all-rifle family.  Both variants are based on their blued steel-framed 45-70 lever big bores.  There’s the H018-410R, which is the compact 20 inch version with a fixed cylinder bore choke. But the heart of the line, as far as we hunters are concerned, is the H018-410 long gun with a 24 inch round blued barrel, interchangeable invector style chokes, and brass front bead.  The barrel length greatly improves practical ranges and capabilities, while screw-in choke options make most any small game hunting or clay shooting game a possibility. 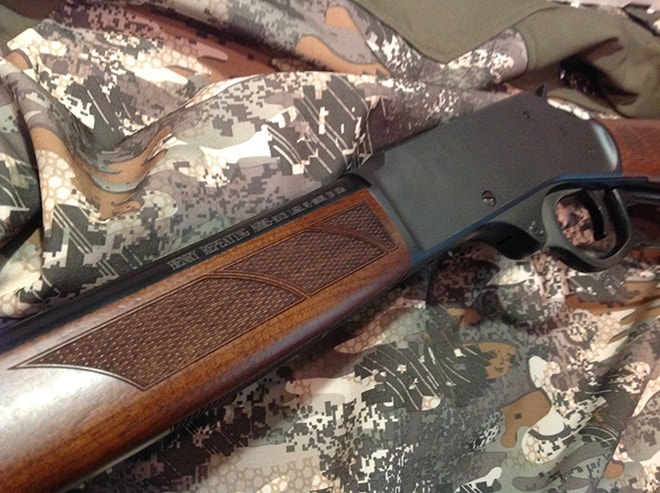 Detail of the classy and practical checkering. (Photo: Kristin Alberts)

Both are chambered for 2.5 inch shells with a five round capacity in the tube-loading magazines.  There’s dark, straight-grained American walnut furniture that is checkered both fore and aft, a pistol grip stock, sling studs, and a rubber recoil pad for the negligible recoil. 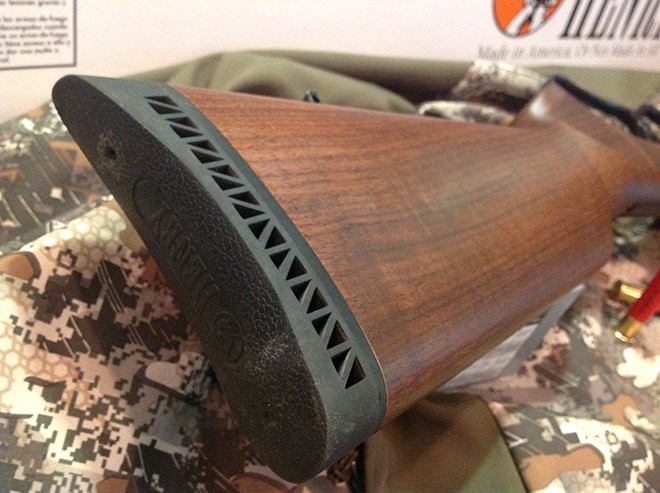 Detail of ventilated rubber recoil pad. Comfortable, but not even necessary given the gun’s light recoil. (Photo: Kristin Alberts)

While the short version comes in at $50 less, MSRP on our test long-barrel is $902.  Yes, that’s a stiff price, especially given that only the full invector choke tube is included.  But price out other quality 410 repeaters or O/U guns and partner that with the reliability and longevity of a Henry, and this will be the last 410 you’ll ever need to buy.  The only thing we could ask for is a better, more memorable model name than H018-410.

You can read a more in depth review of the short barreled 410 and its affinity for slugs here.  Instead of delving into the depths of the gun, we donned some camo and headed into the spring turkey woods. 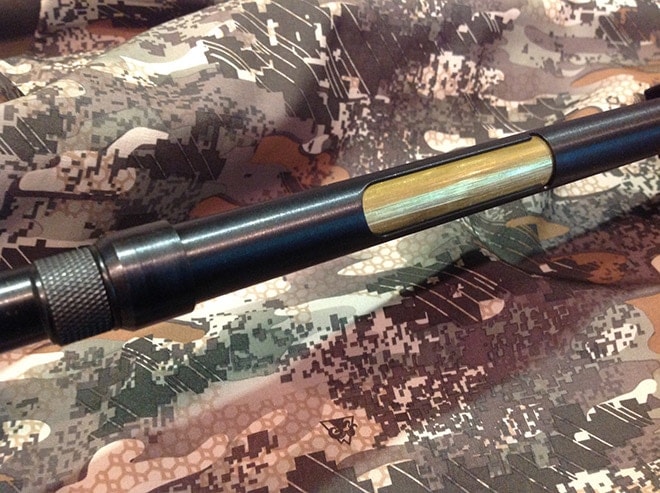 As with all Henry rifles, the 410 also loads through the mag tube. (Photo: Kristin Alberts)

Preparing for the hunt

There are two very important caveats before you even consider hunting turkey—or anything of much size—with a 410 shotgun. First, ensure that your state allows the use of this baby gauge.  And second, make a commitment to spend adequate time at the patterning board.  Knowing your patterns and limited ranges are crucial to having a clean, ethical and successful hunt.  But once those keys are cleared, hunting with a  410, especially a sweetheart like Henry’s lever action, is one of the most rewarding and enjoyable ways to go. Interesting barrel markings. Yes, the 410 is limited to 2.5” shells, but this is not the cylinder bore model, but rather accepts chokes and comes with the Full choke installed. (Photo: Kristin Alberts)

With our test Henry and the included full choke, we headed to the patterning board with a couple boxes of Winchester high brass hunting loads.  Our choice for the gobblers based on knockdown power and pattern was quickly the Winchester Super X #4 shot at 1245 fps.

Our first pattern at 15 yards was devastating, well centered, and inescapable.  Moving back to 20 yards opened up the pattern considerably, but still left plenty of pellets in the turkey target’s fatal neck and spine zone.  The move to 25 yards would be the last.  The pattern was acceptable if not fantastic and, in this case, was the maximum edge of what seemed an ethical shooting distance. 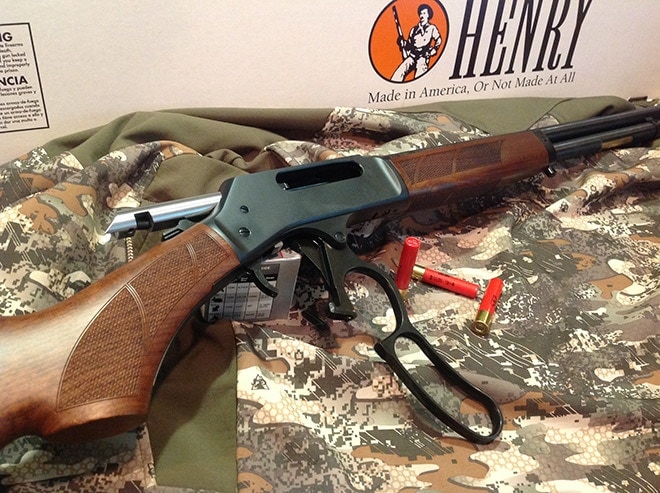 An open action. The matte finish and aggressive checkering are ideal for hunters. (Photo: Kristin Alberts)

Heading into the hunt, I decided that ideally I wanted the bird to be inside the 25 yard mark.  The only downfall to the new Henry 410 is the limitations of the 2.5 inch shell.  In this instance, being able to chamber 3 inch shells, with their increased payload, would have been a boon.  But, as you’ll soon see, the gun gets the job done.

Because shooting range is limited by the gauge, it generally means more time in the field.  In my book, more field time is time well spent.  You’ll spend more time observing nature, watching turkey movements, and becoming a better hunter by either moving yourself stealthily into closer range or by calling and decoying birds into your lap.  And that’s exactly what we did. 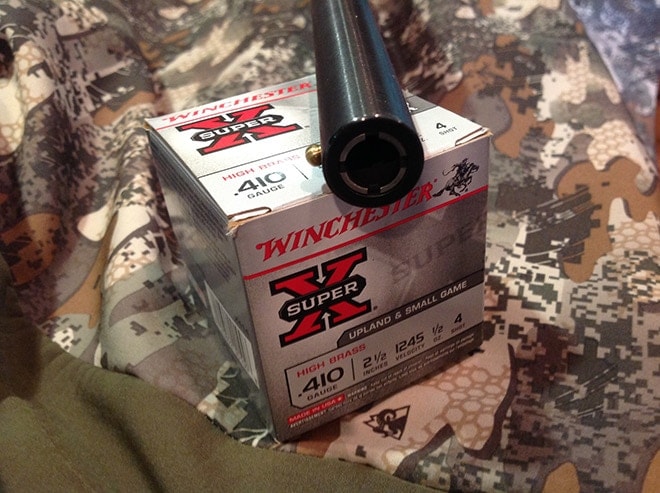 The front brass bead and tiny interchangeable chokes of the 410 bore. Nice, though Henry only includes the full tube. (Photo: Kristin Alberts)

It took most of the weeklong season to get within our ethical 25 yard range, but eventually we were able to set up in the opening of a little sumac and hardwood thicket, just off the end of a small beanfield.  After unsuccessfully working several groups of henned up toms unsuccessfully during the first few days of the season, and with others unreceptive to calling, we finally struck it rich.

It was early afternoon when two hens came out to feed at the end of the field, and it wasn’t long before the big boy strutted in behind them.  A little light calling on the slate got the tom’s interest and he started heading our way.  Though minutes pass like hours when turkeys are hung up on their way into range, it became clear they were indeed coming to check out the dekes, soft hen clucks and purrs from our calls.  When they had closed the majority of the 100+ yard distance, the tom ducked out of the field and into the thickets, coming towards us, but silent and often out of sight. 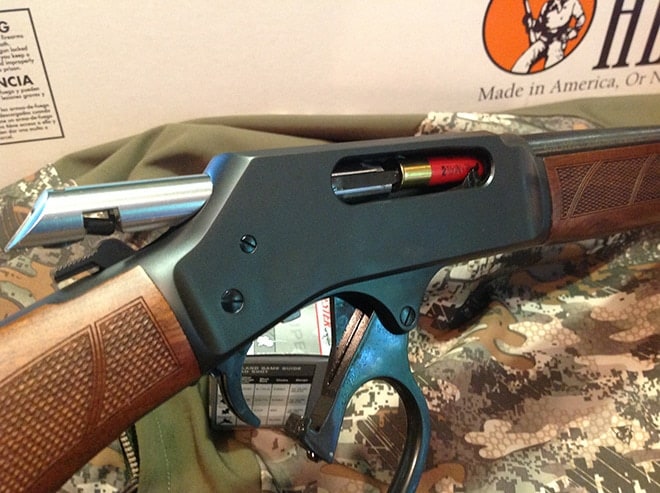 Hunkered down and waiting, we finally saw him charging in toward the jake and hen decoy.  In full camo and with the matte finish of the Henry’s metal and wood, the birds never knew we were there.  As soon as the tom cleared the last clump of sumacs and entered a nice shooting window that I had pre-ranged to be right at 20 yards, I set the hammer and let loose with the little Henry 410.  The bird rolled hard down into a little gully. Though there was some wing beating and leg kicking, by the time I got out to him in case a follow up shot was needed, he had already expired.  It was all smiles and gratefulness for both the harvest of a beautiful bird and the performance of a sweet lever gun.

Henry helped define one of the most remarkable seasons afield, and doubtless will see many more days in the same woods shooting squirrels from the old maples and rabbits in the snowy seasons. 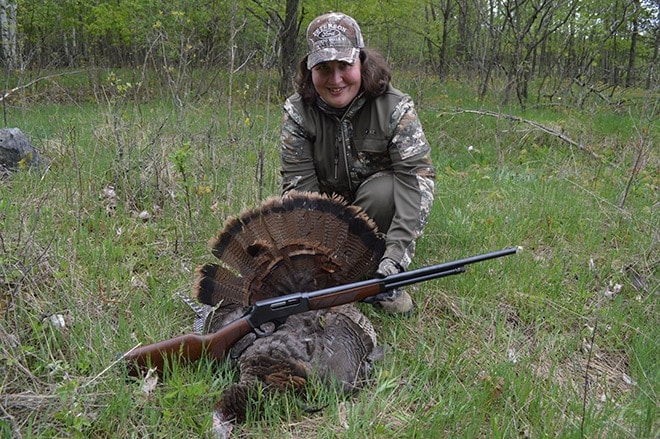 The tools, the talent and the trophy bird. Henry’s 410 proved itself this gobbler hunt. (Photo: Kristin Alberts)

Henry proves that big memories can be made with small bores.  The Henry 410 has nice enough American walnut, but is not a safe queen.  These little scatterguns are built to hunt, with matte finish and grip checkering.  Our gun got wet, laid in the leaves, and in the end, found itself with mud and a few scuffs to show for its successful hunt.  While it’s certainly not built as a turkey gun, these lever action 410’s proved themselves ideal hunting companions.  I wouldn’t hesitate to take them out chasing rabbits, squirrels, grouse or even fox.