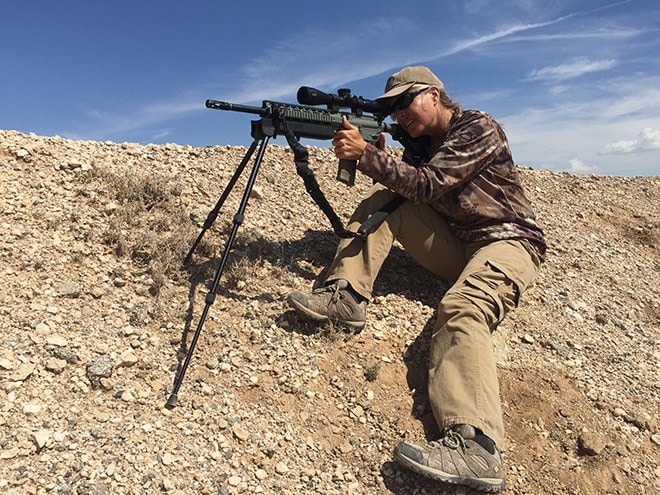 The folks at Swagger bipods asked me, typically a defensive/tactical shooter, to review their bipod. I soon found out, the Swagger isn’t like other bipods — it’s a breed all its own.

The Swagger has been a hit with hunters as it not only replaces traditional shooting sticks, which have to be carried separately or fashioned from whatever’s around, it takes the concept of shooting sticks to a new level. The field model, which I tested, has legs that extend anywhere between 6.75 to 29 inches. The treestand/blind model’s legs can be set from 9.75 to 41.75 inches. 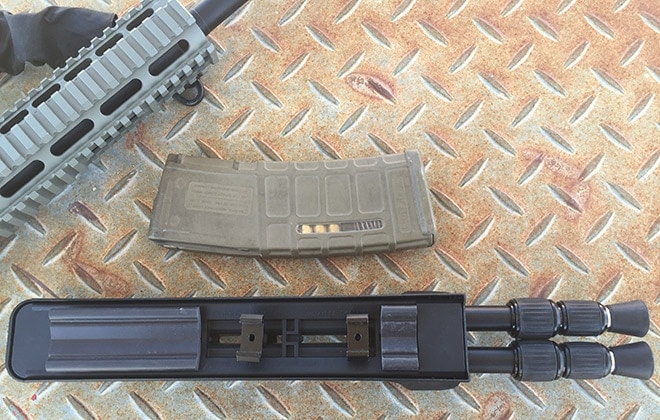 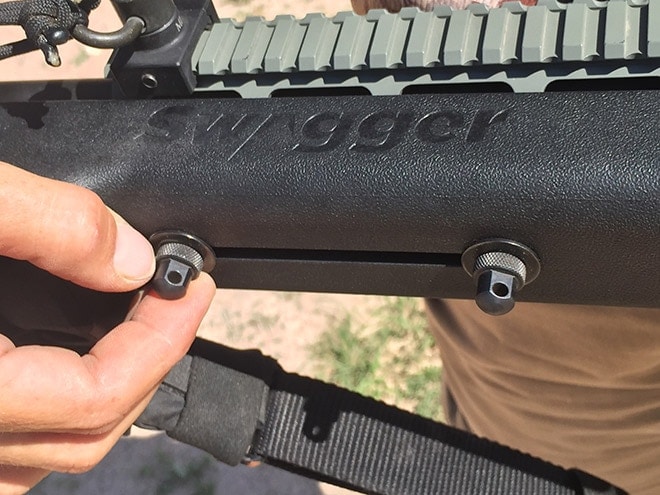 Out of the box, the Swagger attaches to the sling stud of a traditional forend. Optional Picatinny rail adapters, which I used, make the bipod capable of attachment to a rail. The screw-in studs were, conveniently, sling swivel screws, giving users the option of keeping a front sling attachment at a somewhat customizable distance. Since my own sling is already attached to a side rail, I left it as is. 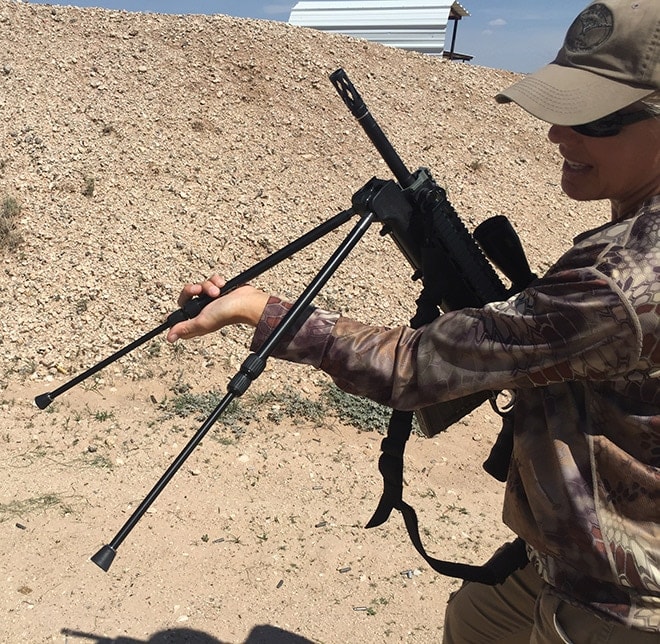 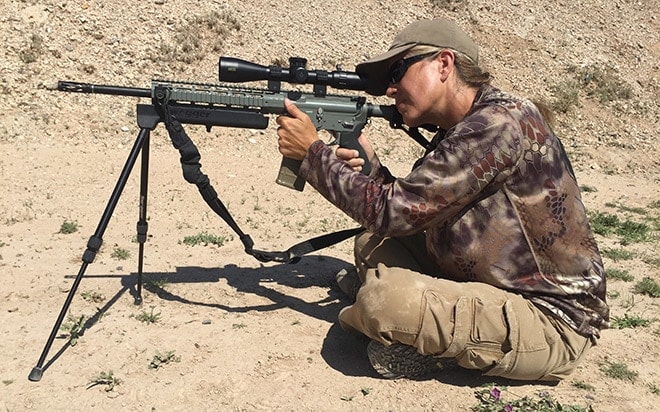 I mounted the Swagger in a forward position, to retain the option of gripping the AR by the magazine well. (Photo: Team HB)

Inside the forend-mounted case are two legs which pull out from the front. They’re attached to elastic cord and are deployed by pulling straight forward, then down to tuck the base of the now vertical leg back into the frame.

Once the legs are in place, two collars on them can be loosened or tightened to add length. They’re independently adjusted and can thus be different lengths for non-level locations. 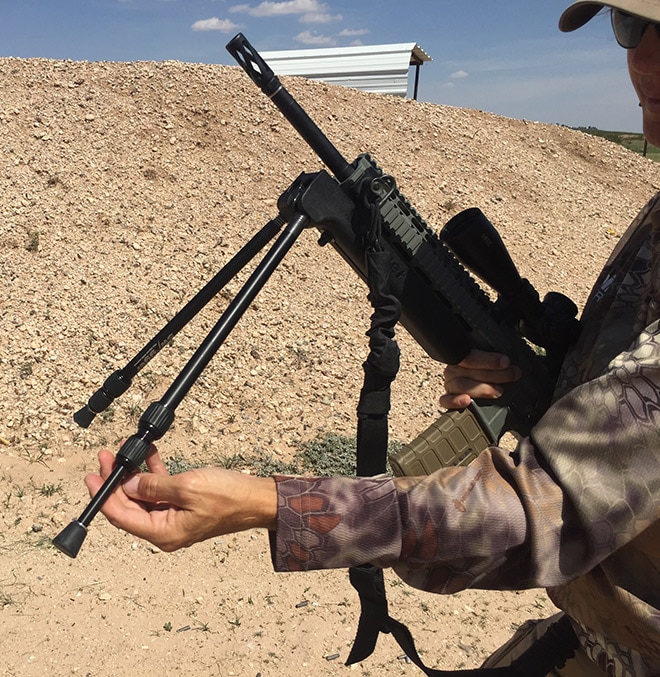 Collars on the legs allow for half and full extension. Here is a view of half. (Photo: Team HB)

With the legs on the ground, a shooter can lean into or away from the rifle to obtain an optimal position and field of view in practically any setting, no matter how remote or treacherous the footing. Prone, sitting, kneeling, and even some unorthodox standing positions are made more stable by this bipod. 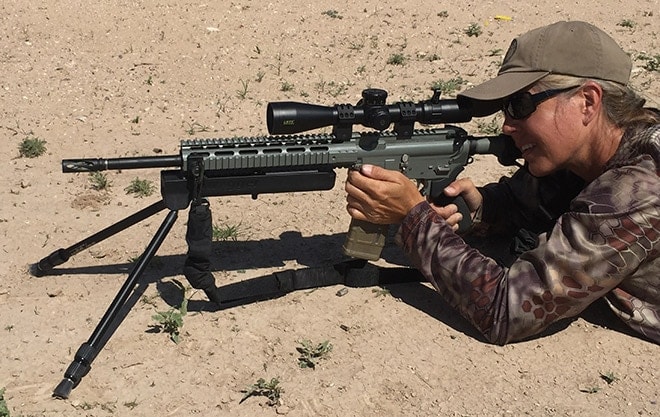 Prone. The legs had to be placed well forward. (Photo: Team HB)

Prone, this time having pushed into my gun, bending the legs rearward. (Photo: Team HB) 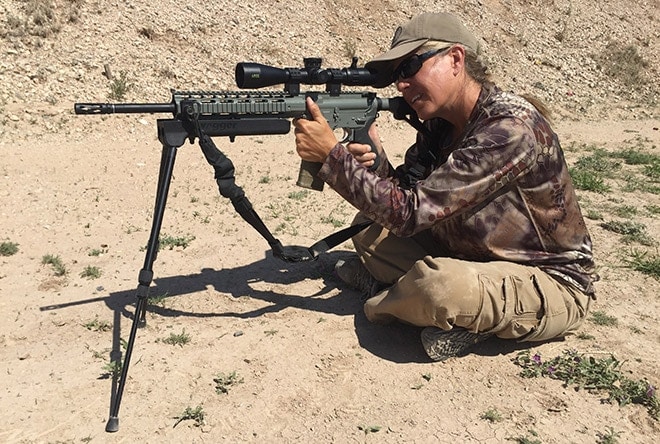 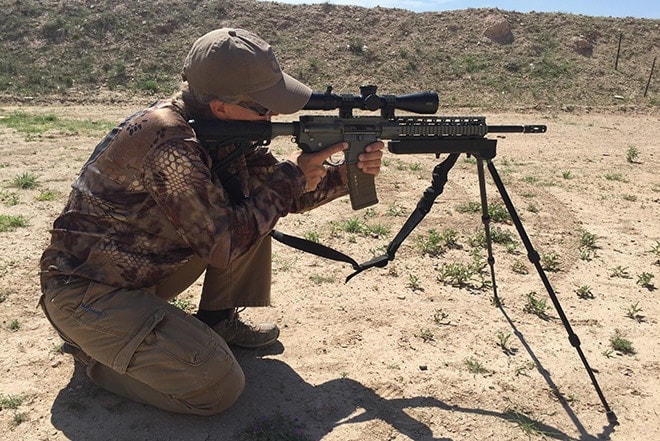 Kneeling is very stable with the Swagger. (Photo: Team HB)

The Swagger is quick, but not instantaneous to set up. Sliding the rail adapters onto my rifle and choosing a point on the forend to tighten them took one studied try, then was rapid after that. I chose to place the Swagger frame as far forward as possible without having it right under the muzzle. The bipod stayed tight with simple finger tightening, though on a long hunt or mission I’d prefer to Loctite the screws. 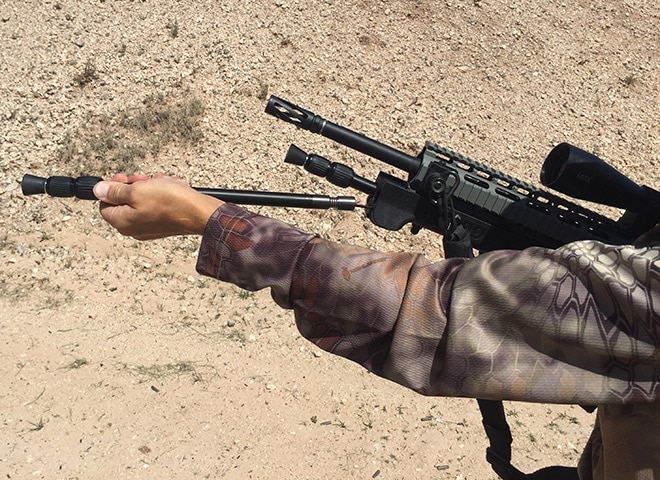 Safety note-deploying the legs is easy, but don’t allow the muzzle to cover your hand in the process. (Photo: Team HB)

After installation, using the bipod is quick, but not instantaneous. Extend the legs, forget to tighten the collars, put sights on target, and the forend takes a dive. A few seconds spent tightening leg collars is necessary.

Not as necessary, in my estimation, is the push-button lock that’s integral to the Swagger case. It allows the gun-side base of the legs to sink fully into the case, making them more stable.  In this trial, the top of each leg tended to come out anyway, without any detriment to function. 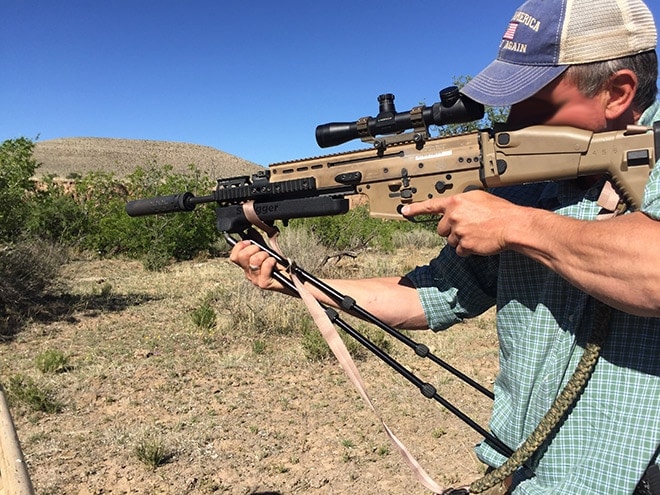 Using the Swagger against the body for off-hand shooting. (Photo: Team HB) 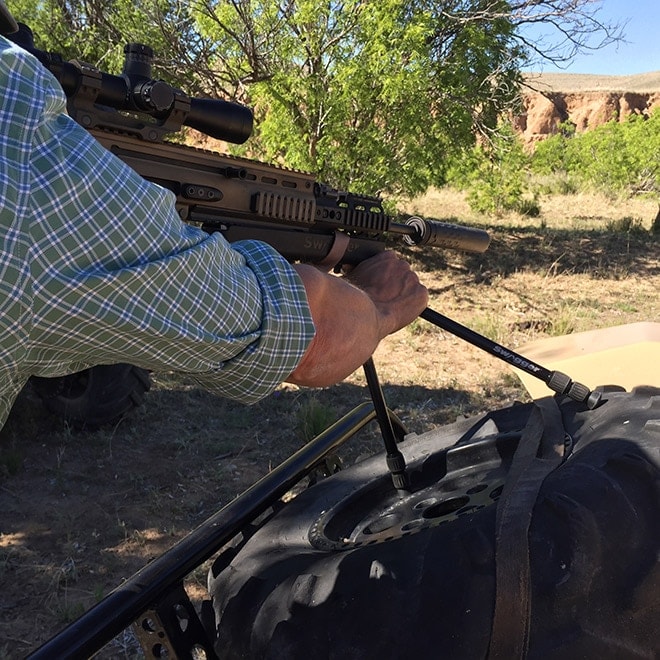 The Swagger can be used like shooting sticks. (Photo: Team HB) 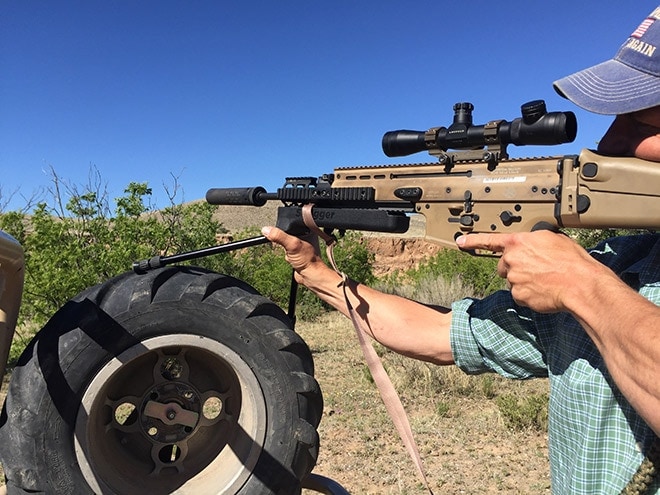 Prop it up on anything! (Photo: Team HB)

The bipod adds some bulk and 23.6 ounces of weight to a rifle. Compared to having to carry shooting sticks separately, the bit of weight outweighs the likelihood that sticks will be lost or broken, and it helps keep the load in one place, making it safer and easier to walk afield.

For hunting, I’d paint the metal ferrules at the top of the legs matte black.  The aluminum-colored finish currently on them makes it possible to give away one’s position due to reflection. On the other hand, the device is very quiet to deploy or retract, a necessary factor for stalking game. 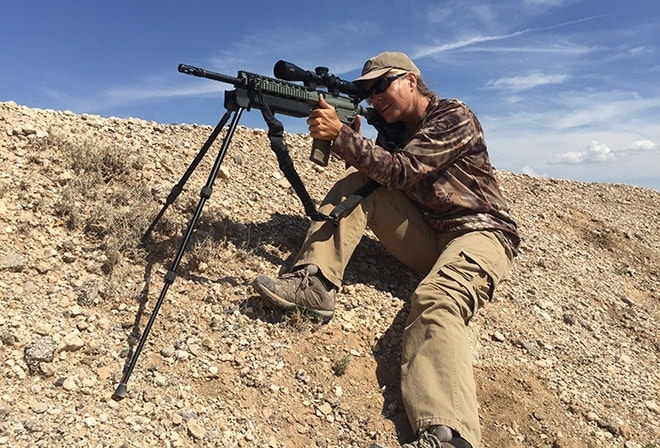 Hillside shooting with the upper leg short and the lower one at full extension. (Photo: Team HB)

Any hunter who goes afield with a rifle should consider adding a Swagger bipod to his or her setup. It’s safer and easier to carry than a set of sticks, and infinitely more adaptable to terrain. At $199.99 for the field model, plus more for the rail and sling swivel screw add-ons, it’s not an inexpensive accessory. It’ll be interesting to watch consumer feedback in a few years after the device has been tested over time and in rough weather. I expect that durability or warranty service should be outstanding in view of the price.