From the high-tech Arex factory in Slovenia comes a series of double/single action Rex Zero 1 pistols, chambered in 9mm. I had the opportunity to test the full-size Rex Zero 1 last fall, as well as meeting with factory reps. My curiosity was piqued, and when the company announced the compact version of the lineup, I jumped at the chance to take one home for testing.

The Arex factory is a multi-function center whose primary manufacturing focus is tools. Influences from the defense industry, and the company’s purchase of high-end CNC machining equipment, evolved into the development of the Rex pistols. Arex is, according to company reps, a household name in eastern Europe, akin to, say, Snap-On Tools in the United States. 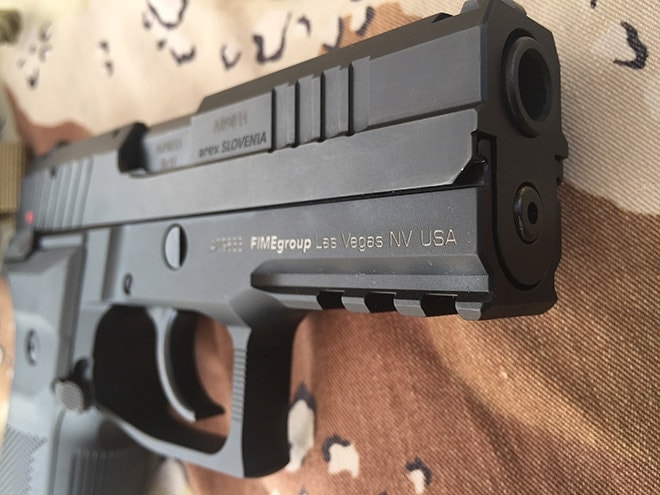 The Rex line is imported by FIME Group of Las Vegas, Nevada. The guns bear both Arex and FIME branding.

The Rex Zero 1CP — CP identifies the compact version — is not to be confused with a sub-compact. It’s big enough to show up at the range with the full-size guns and not be at a disadvantage.

Maybe a better comparison is this: think of a Sig P220 carry model. Now think of the Rex Zero 1CP. There. With a few subtle differences, mostly in grip angle and configuration, the Rex is a Sig P220 clone — for a lot less money.

The Rex’s 9mm chambering is one substantial difference between the two. Arex also offers this gun in 9x21mm, .40 S&W, and .32 Auto, though I’m not sure about availability in the United States.

Folks who want a gun that feels like a tank should listen up because this is a gun you’ll love. The 9mm chambering means more rounds than the Sig. It has a capacity of 15+1 and comes with two metal, easy-dropping magazines. The mags are well designed with a flat floorplate and enough of a lip to make it easy to extract in the event of a double feed (which never occurred during testing). 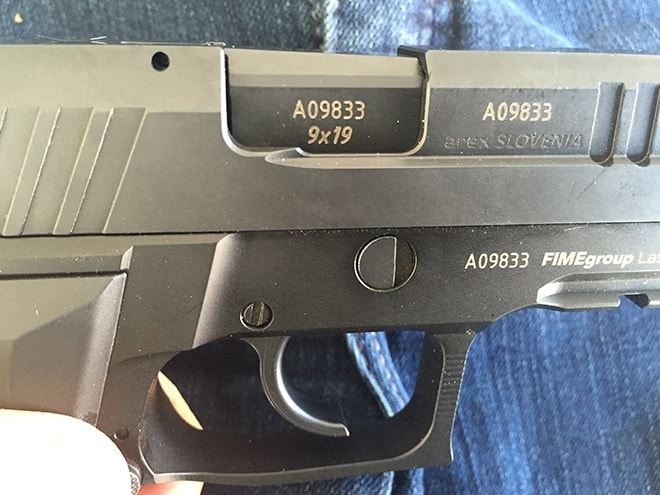 It’s a heavy piece at 1.57 pounds unloaded. The frame is made of 7075 aircraft grade aluminum, anodized for abrasion resistance. The slide is chromoly steel, likewise the monolithic barrel is precision machined. Both frame and barrel receive Arex’s proprietary treatment for “extreme corrosion resistance.”

Under the 3.85-inch barrel is a Picatinny rail. Behind that, a squared-off, textured, oversized trigger guard adds to this gun’s imposing appearance. The textured magazine release is well-placed and easy to get to. The aluminum mag well is complemented by screw-on polymer grip panels, lightly pebbled and with shallow finger grooves on the sides. The front and backstraps have molded grooves that provide a bit of traction. 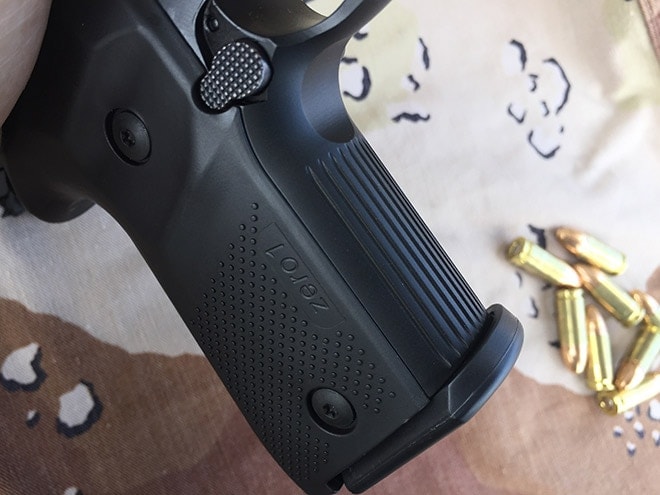 There’s a lot going on in the frame-to-slide interface. Akin to the Sig design, on the left side there’s a takedown lever and a slide stop/decocker. Added to that tradition is a thumb-operated safety lever that exposes a bright red dot in the down or fire position. The safety renders the trigger useless; it can be moved along its entire path on safe. That same safety lever is on the right side, making the gun both ambidextrous but also slightly vulnerable to unintentional disengagement of the lever if the one on the outside is rubbed by a seatbelt or other object. And in the back, of course, is a traditional hammer. 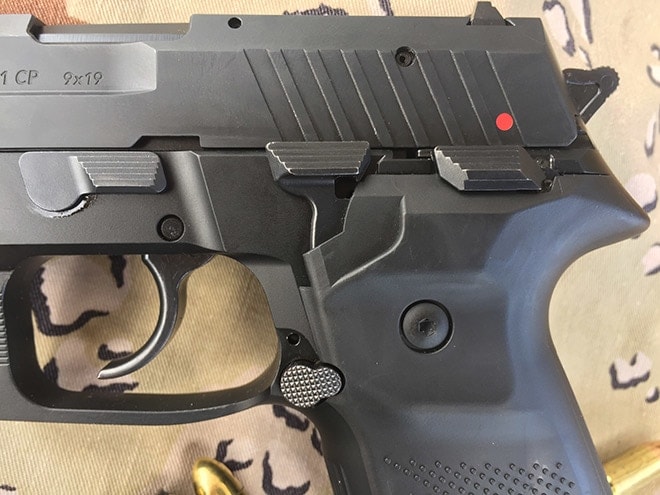 There’s a lot going on at the slide-frame junction. (Photo: Team HB)

Atop the slide, a driftable three-dot sight system is set. It’s quite user-friendly both for firing and for carry, as the sights are a snag-free, low profile design. Also on top is a loaded chamber indicator, a short bar directly behind the chamber.

An interesting and custom-looking feature of the Zero 1CP is the bit of extra machining at the bottom edge of the ejection port.  It appears to give the already roomy port even more room to get rid of brass or problem cartridges. It’s a subtle but appreciated feature in my eyes, as it contributes to reliability. 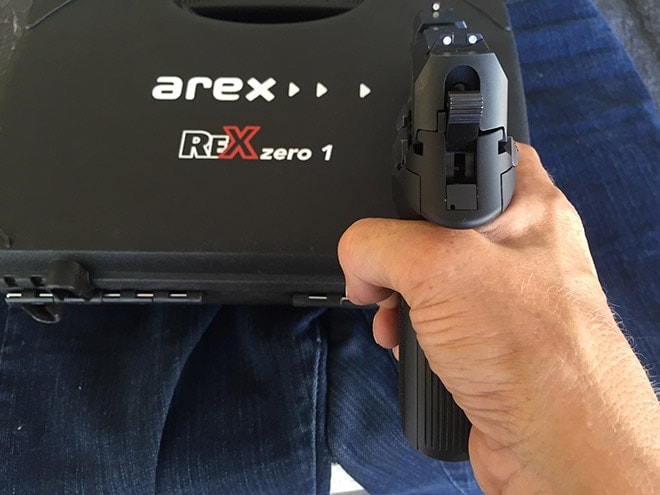 To activate the trigger in double action, my hand has to rotate quite far right. (Photo: Team HB)

For those who like forward cocking serrations, it has those in addition to rather unremarkable rear ones.

In a departure from tradition, the owner’s manual suggests cocked-and-locked carry with the safety on. I thought that was a terrible, unsafe suggestion until I actually fired the Rex. Why terrible? Arex is suggesting a carry method usually reserved for 1911s, which have a grip safety.  I’m not hep on making a lever (plastic by the way) the only thing that stands between me and an unintended discharge. 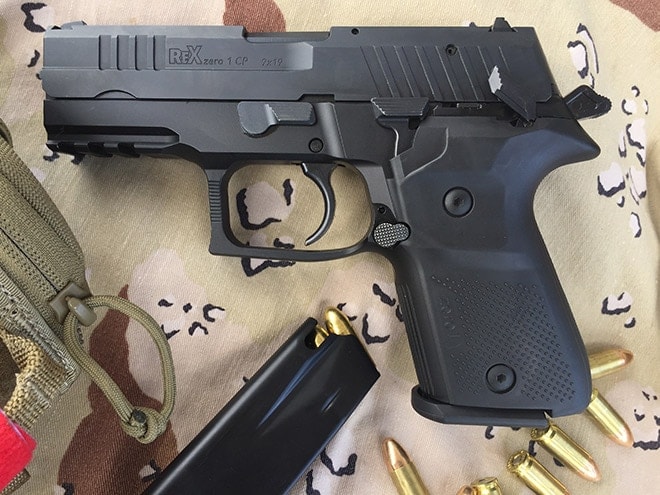 Why did I say that suggestion was bad until I shot it? Another similarity between the Rex Zero 1 series and its Sig muses is the long, heavy double action (DA) trigger pull. The grip of the Rex is so fat, I am forced to compromise my own grip to even get to the trigger, let alone cycle it through DA. The only way this worked for me was to hook too much of my finger into the trigger guard to get that first shot downrange. After that, in single action, it was much easier.  The traditionalist in me scoffs at my thumb-cocking the hammer — something I generally discourage — however, it does get the job done when reaching the trigger is a challenge. 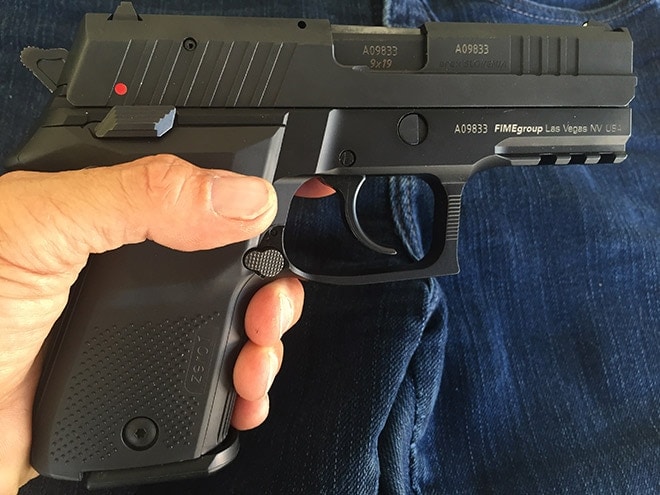 The safety lever is identical on left and right sides. (Photo: Team HB)

Sig lovers will find yet another reason to rejoice upon feeling the trigger. All but the most experienced Sig shooters will find no detectable difference in operation.  A long but smooth first pull, followed by a subtle but definite reset about a third of the way home, and a quarter inch or so of travel to get back to the break.

This is an accurate shooter, and the quality of the barrel shines on tougher shots.  The big gun made short work of 4-inch plates at 13 yards without any guesswork or trial and error on the shooter’s part. 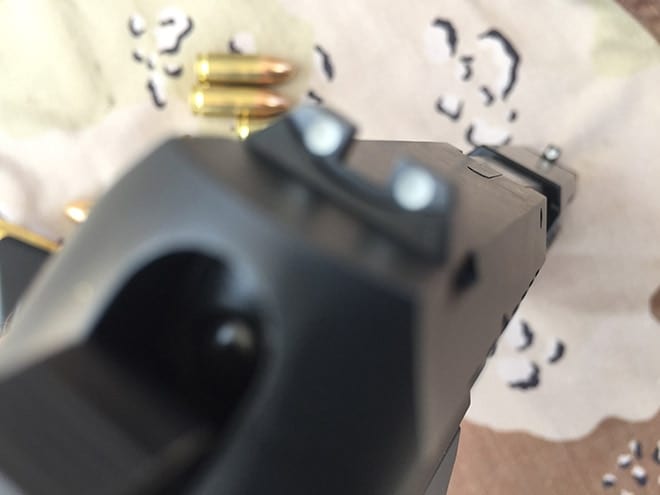 In a word, flawless. We fired several brands of FMJ and HP, sometimes mixing brands within a mag. This is as it should be, but not every gun maker delivers.

This big 9mm has a tall profile. (Photo: Team HB)

The abrasion-resistant coating on the exterior, as well as a matte finish, make for easy wiping down on dusty or rainy days.  We shot it during both, and the gun was always easy to make look like new again.

Takedown was the only place this gun had a bauble, and it was actually in a desirable direction.  The manual directs the user to pull the slide back so the takedown lever can be rotated within its slide indentation. Users are supposed to keep pressure on that lever while moving the slide forward and off — a process that’s a lot easier for anyone with three hands. 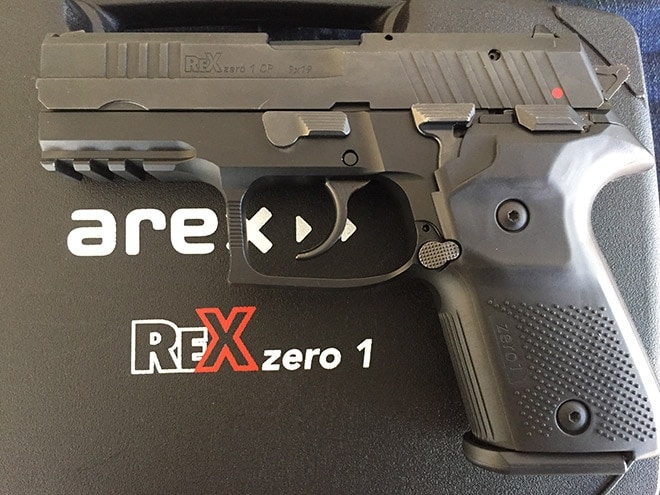 Surprisingly, that method of disassembly worked the first time. After that, there were several instances of the slide coming right off like a Sigs, without pressure on the takedown lever. This is what happened in the video. A few reps later (yes, we got a little obsessed with this procedure), it reverted to needing pressure on the lever. We shot before and after these multiple disassemble/reassemble exercises with no problem.

Best of all, the Rex Zero 1CP is reliable. The Rex Zero 1CP is a great choice for the person who’s always wanted a classic DA/SA Sig but doesn’t have the dough. Larger frames can enjoy carrying it concealed or open. A flashlight accessory would make this a powerful home defense tool. Priced in the low $600s, it’s not inexpensive in its own right, but match grade barrels never are. People who like a gun that fills the hand with substance will love this one. Smaller hands can still operate it, but accuracy will require more effort using a compromised grip. 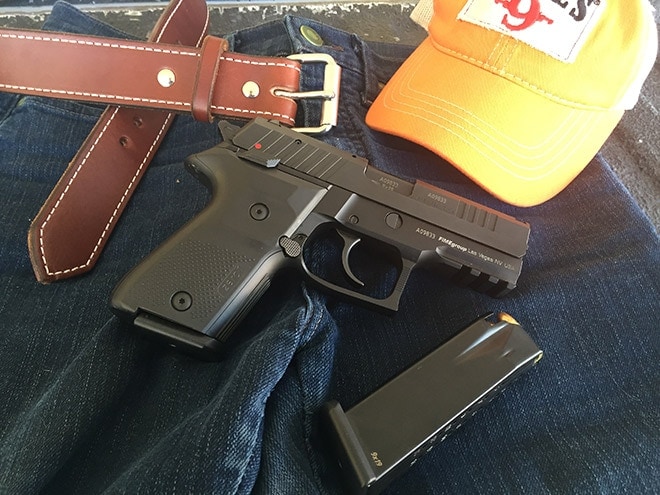 The Zero 1CP will fit big hands like a favorite pair of jeans. (Photo: Team HB)

Holsters are available through K-Var, a real asset when one is shopping for a non-mainstream sidearm.