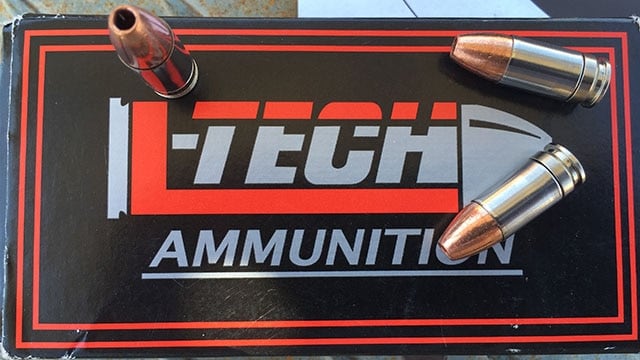 Kentucky-based L-Tech Enterprises recently shared a sample of their new defensive 9mm ammunition, Full Stop. While it’s not always easy to say something new about ammo, L-Tech provides some interesting new components to discuss, at least one of which may be a boon to anyone who carries daily.

L-Tech both manufactures and tests specialty ammunition. The company makes some of the ammo used by the US military, and they’ve been manufacturing Sig Sauer’s new and growing line of ammunition for the past three years.  As with most firearm products, they are not alone in the manufacturing process, and have partners with other US-based companies to make and recycle ammo.

What’s really remarkable about these new loads is the case, called the NAS3 and made by Connecticut-based Shell Shock Technologies. The company keeps the exact composition of the NAS close to their chest, but they do share that it’s a nickel alloy that allows for easy range cleanup as the cases will stick to a magnet. While the cases in this test are sold as new, the company offers a return program for ranges that matches market price for brass.

The unique cases are reportedly more uniform in thickness than brass, which makes for more consistent bullet velocity. The flat bottom of the case provides what the company says is 2 percent greater internal volume, probably contributing to its promise of the impending release of a +P load. The flash hole has conical and slightly larger-than-normal construction, providing greater flash dispersion and helping to maintain consistent velocities in spite of the bit of extra space inside the case.

L-Tech claims these cases have better lubricity, less abrasion, and cause less fouling and wear on extractors as compared to brass. In addition, they’re lighter. Even holding one round in hand with a brass-cased round of HP in the other, the difference is immediately obvious. The cases are said to be ideal for frangible or other non-lead bullets as well as traditional ones.

Reloading is an option with NAS3 cases, but not without the use of a special die that pushes the case out from the center using a spring, rather than pulling on the rim. Shell Shock outsources its reloading to S3 Reload, also of Connecticut. 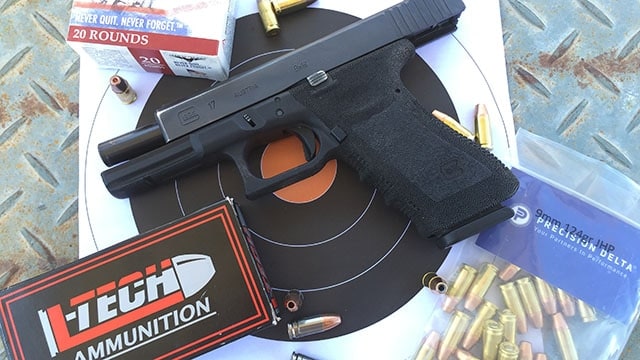 In the unofficial comparison the L-Tech Full Stop held its own. (Photo: Team HB

L-Tech is proud of comparative testing results done with its 124 grain hollow point bullet in this new ammo. The bullets were put through FBI gel block ballistic tests in direct comparison to the well-established HP load, Speer Gold Dot. Results between the brands were comparable, with Full Stop showing deeper penetration of gelatin, steel, and wallboard. That data can be considered good or bad, since one of the desired traits of HP ammo is to expend its energy in the first 12 or so inches of impact and thus, in ideal circumstances, not penetrate unintended targets beyond the first one.

The Full Stop bullet is different in appearance from many of its ilk in that it starts with a narrow and tapered opening, and has three deep grooves that extend nearly to the base.  It’s designed to penetrate about 1.5 inches before the petals open into a “propeller,” exacting impressive displacement while the projectile still has spin. According to factory data, retained grain weight of the Full Stop was consistently higher than Gold Dot across materials, so there is virtually no fragmentation.

L-Tech offers extensive lab test data and photographs on their website. I had the pleasure of low-tech testing. We ran the ammunition through four different handguns—a Glock 19, Canik TP9SA, Glock 43, and Heckler & Koch VP9.  That includes full magazines, and a few mags with a mixture of another brand’s FMJ and L-Tech, to test feeding and cycling with that variable.

The ammo ran flawlessly in all four firearms. It’s my opinion that the very tapered bullet will contribute to reliable feeding in other guns; there’s simply nothing to block chambering.

In an unofficial comparison with other HP loads, including Team Never Quit’s 100 grain and 124 grain JHP by Precision Delta. In each five-shot group, fired from five yards in an unsupported standing position, the L-Tech delivered a ragged hole plus a modest flyer. Thanks to the flyer, L-Tech groups were in general slightly larger than the other brands. The flyers and group sizes are of course very possibly related to human error, but the groups were very similar on the repeat test. This combat-accurate performance may actually be a positive thing in typical criminal encounters, where two new holes beats one on top of the other. As a result of this test, as well as some other recreational shooting I did with this ammo in the Canik, I would be confident in carrying it as a component of my EDC.

L-Tech Full Stop 124 grain 9mm is one of the unsung standouts of today’s pistol ammunition selection. Easy cleanup of brass, a manufacturer price-match recycling program, and good fit on frangible or non-lead bullets make this a superb choice for the environmentally conscious. Ballistic performance testing that’s on par with Gold Dot, and great reliability with feeding and velocity, should assure confidence in defensive applications. While reliability is king in my book, a close second is its lighter weight. For civilian EDC, police, or military use, lighter rounds mean the ability to carry more rounds with less physical burden. That translates into better physical performance and firing capability from the operator—something other 9mm producers can’t claim.

The only problem with this load is in the marketing. L-Tech is known for its frangible loads, but Full Stop is hard to find. The lackluster packaging needs an overhaul. The box leads the user to think the ammo’s name is L-Tech, and misses an opportunity to educate users about the many advantages of this little-known ballistic gem. Prices are to be announced. Full Stop ammunition is only available by direct factory order from L-Tech Enterprises, Inc. in Eubank, Kentucky. Current price is $29.50 per 50-round box.