After a month long buildup on social media, Springfield Armory dropped news of the Saint – the company’s first foray into the AR-15 platform. The industry was torn over the announcement, with some questioning the need for yet another AR while others praised the Saint’s simplistic and beginner friendly design.

The Saint is a non-intimidating, newcomer style that I was most interested in checking out. Pistols are my forte and the platform I’ve trained on for nearly a decade. Rifles, and specifically ARs, not so much. I have what one would term “a working knowledge” of AR-15s in that I understand the mechanics and uses but I just haven’t spent a lot of time shooting them.

Hoping to gain some insight on the Saint’s novice nature, I decided to tackle this review from the perspective of a ground level AR shooter. There’s nothing fancy here, folks, just a stripped down, basic view of how the Saint performs for a rookie rifle enthusiast. 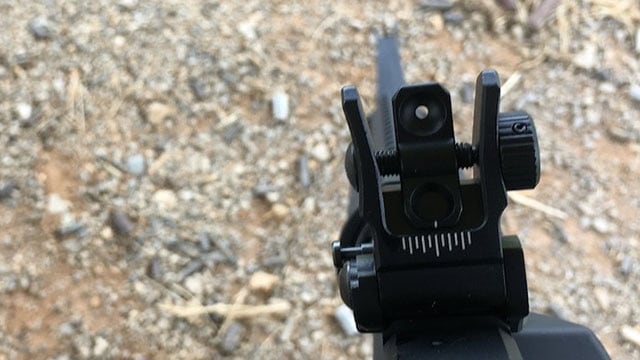 Equipped with a flip-up rear sight, the AR-15 can easily be used at shorter distances without a scope. (Photo: Jacki Billings)

Shipped inside a plastic, hard case the gun comes with a 30-round Magpul PMAG Gen 3 magazine.

As I expressed earlier, I am by no means a rifle shooter; so the Saint seemed like a perfect fit as it’s billed as “beginner friendly.” Off the bat, I loved that the gun shipped in a plastic, hard case equipped with a carry handle. This alleviated the need for me to run out and purchase my own rifle case for transportation to and from the range. As a newbie looking for a “straight out of the box” feel, the Saint was already winning points. 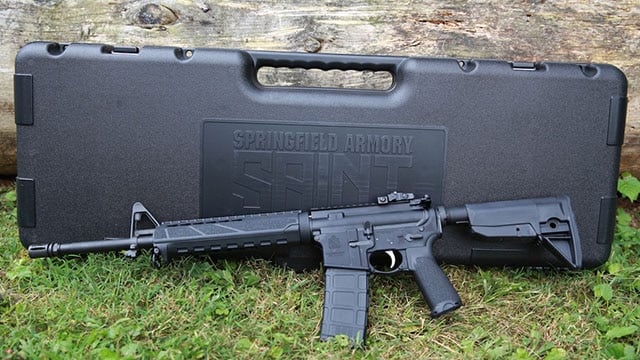 The rifle ships in a hard plastic carrying case perfect for toting to the range. (Photo: Jacki Billings)

Upon opening the box, I discovered the rifle alongside the Magpul PMAG magazine. I was initially disappointed that the rifle only shipped with one mag. As a pistol shooter I’m use to seeing at least two mags in my gun boxes. I did, however, reason that I was getting 30 rounds to my usual 15 and thus the lack of the second mag wasn’t as big of a deal. Not to mention, AR-15 mags are aplenty so tracking down a second one for the range wasn’t a problem. If you intend to make the most of our range time, though, you’ll definitely want to invest in additional magazines to reduce the amount of time spent on loading.

Despite only one mag source, I can’t say enough good things about the Magpul design. Easy to load and with no wear and tear on my thumbs, loading mags didn’t seem as much of a chore as they often do when attempting to slip small 9mm rounds into jaggedly cut pistol magazines.

Springfield’s Saint touts the same characteristics you’d find in any standard AR-15. The mag release button sits on the right side of the gun, above and forward of the trigger guard. Despite my smaller hand size, I was able to efficiently access it to drop the mag. Also easy to reach is the gun’s safety. A standard flip switch, the safety is laid out so that even the freshest newcomer can understand when the firearm is safe and when it’s ready to fire. Sitting on the left side of the gun, it’s easily reached with a flick of the thumb.

Also resting on the left side of the Saint is the bolt release button which I found to be extremely responsive. It only takes slight pressure to engage the mechanism causing the bolt to slam forward. My only contention with the bolt release button is that, in my case, it felt awkward to reach at times. I found myself preferring to release the bolt via the charging handle more than the release button for this reason.

For this beginner’s take, I chose to shoot the Saint as it arrived with no additional extras or add-ons. That meant utilizing the Bravo Company furniture as well as the Springfield flip-up sights.

The Bravo Company buttstock is a six position configuration that, as a petite shooter, I found especially useful. I was able to shoot it in position number one or two comfortably, extend it fully, then hand it over to fellow range buddies for a go. Though function wise it worked as intended, sliding it into position proved a tad difficult. The mechanism that allows the stock to slide resists movement at times, resulting in struggling and tugging to achieve cooperation. There was more than one instance in which I could be found with the unloaded rifle tucked between my knees while I jerked on the stock. This could become frustrating if you find yourself needing to move the stock often, but if you’re able to keep it in one place consistently, this becomes less of an issue.

Aside from the stock, Brave Company outfitted the Saint with a Keymod handguard as well as a pistol grip. The lightweight furniture blends well with the Saint’s style, offering a sleek yet non-intimidating rifle design.

Topping off the Saint’s features is a proprietary flip-up, rear sight. The sight lies flush against the rail until ready to use, at which point, it easily pops up to allow shooters to expertly sight in targets. I opted to keep the Saint scope-free for this initial review, keeping my targets in the 25 to 50 yard range. I had no difficulties sighting with the flip-up and successfully nailed both paper targets and water bottles at those distances.

The Saint accompanied me on several range outings. My first observation was how lightweight the rifle is. As a smaller statured shooter, heavier builds tire me out sooner and I find myself retreating to nearby benches to offset the weight load. Though I did eventually retreat to both the seated and prone positions with the Saint, I didn’t throw in the towel as soon. I was able to easily manipulate the firearm while standing.

When my arms did eventually tire, I opted to give the Saint a go from the seated and prone positions. Using my range bag, I propped the rifle up and started pinging water bottles at 25 yards. With little recoil stopping me, I happily knocked off the bottled enemies propped along the top of the wooden pallets. 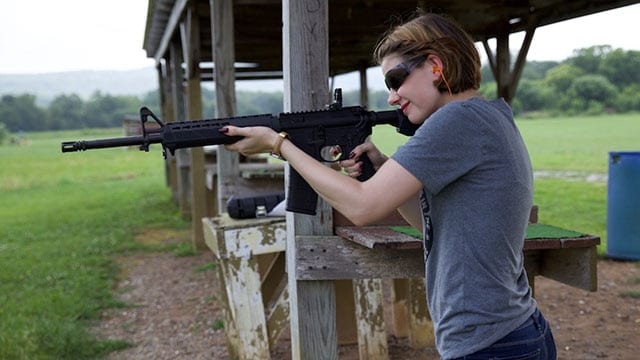 Shooting in a standing position is comfortable even when arm muscles are lacking. (Photo: Jacki Billing)

Satisfied with my shooting thus far and wanting to get outside my comfort zone a little further, I moved my setup to the prone position and pushed my targets out to 50 yards. While long range shooters and rifle aficionados might scoff at the close distance, for a newcomer working solo on the range 50 yards seemed slightly daunting.

Again, I relied on my 5.11 Tactical backpack to act as a shooting rest and as I laid on a shooting mat pulled from my Lynx Pistol range bag that also doubles as my camera bag. Despite the sweltering heat and sun beating down on its matte black surface, the Saint continued to sling lead down range.

Springfield equipped the Saint with a proprietary trigger. Already a fan of the company’s trigger on the XD series of pistols, I was curious if my love would transfer to the new AR-15. Fortunately, it did. The Saint boasts a crisp, clean and reactive trigger that I felt aided in keeping my shots on target and consistent.

In addition to a nice trigger, the Saint proved to be reliable. I shot her in both rain and sun with a variety of .223/5.56 ammunition with no issues. Overall, it happily munched the approximately 1,000 rounds I pushed through it and reliably kicked out spent cartridges with no failures.

Springfield Armory may not have reinvented the wheel but they’ve given newcomers to the AR world a basic yet reliable starting point in which to learn. Available in several configurations (standard matte black, flat dark earth, a free-float handguard variant and California compliant model) the $899 Saint has enough variety to keep the platform interesting without overwhelming or intimidating newbies.