Nature. So beautiful. So full of wonder and majesty. And filled with delicious animals for the intrepid outdoorsman.

Camping is a $646 billion industry, with an endless selection of accessories. Everything from canteens and fire-starters to survival knives and backpacks. While “roughing it” in a camper with ramen might appeal to day-trippers, mountain-men and the like tend to catch, cook and consume their own game on the trail and few calibers are more versatile than .22 LR.

From coyotes to squirrels, the venerable .22 LR can keep your party fed indefinitely, even in the most remote locations — provided there is game to hunt.  While some will argue that their normal carry gun is adequate for hiking I disagree. Most carry guns are suited to dealing with two-legged adversaries and are difficult at best to hit small, distant targets with. While I stand by my argument that .22 LR is a less-than-ideal defensive round, it excels at hunting small game for precisely the reason it isn’t a good defensive round. It does minimal damage. If you’re attempting to shoot a squirrel for sustenance, obliterating it with a .45 hollow point is counter-productive.

When considering a hiking gun, four factors should outweigh all others: accuracy, reliability, portability and weight. A derringer made of depleted uranium with lead grips is just as impractical as a graphite rifle with a 25-inch barrel. Along the same lines, an ultra-light miniscule pistol that groups 25 MOA isn’t useful either. 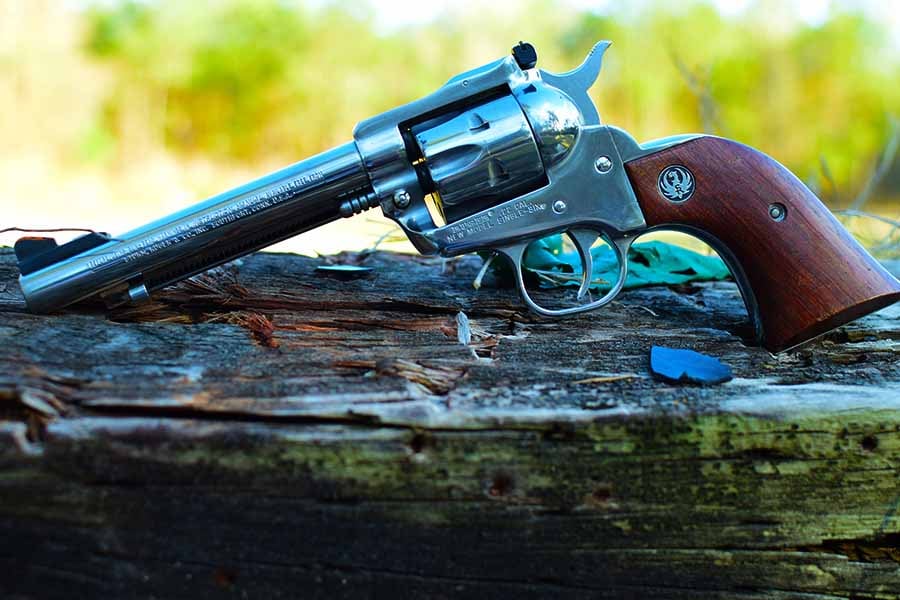 This town ain’t big enough for the both of us, partner. (Photo by Jim Grant)

Revolvers are incredibly reliable and simple to operate, making them an ideal choice for the camper who is not well-versed in clearing jams, since they aren’t ammo sensitive.

With barrels ranging from 4.62 to 15 inches and their crisp single-action triggers, the only limiting factor to what you can hit is your ability.

Additionally, since they utilize a loading-gate, they require no external ammo feeding device. This means hikers can carry spare ammo in anything suitable, from a ziplock bag to a pants pocket. Just be sure to take them out before you wash the pants. 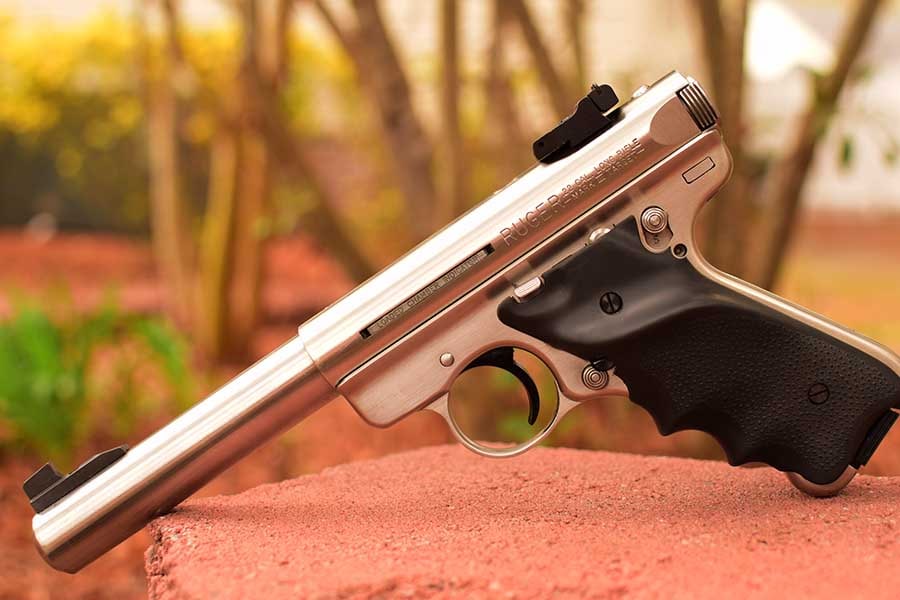 Semi-auto squirrel slayer, for the win. (Photo by Jim Grant)

Reliable, common and more accurate than most shooters, the MK III makes a great camping companion. Heaven help you if the gun needs cleaning on the trail though. Shooters looking for an automatic .22 that points like an extension of their body needn’t look any further than Ruger’s flagship pistol.

The MK III would have placed higher on the list if not for its limited capacity, (MK II: 7 rounds / MK III: 10 rounds) high price and limited effective range. While long-barreled versions of the MK III exist, they tend to make the pistol too heavy for hiking. Also, the MK III’s ability to easily mount optics gives it an edge over most .22 revolvers. 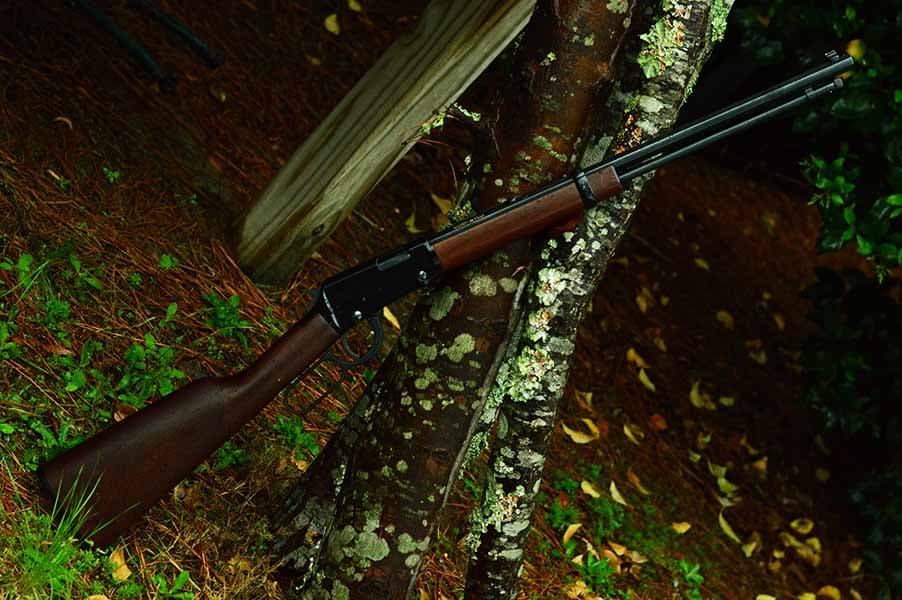 A lever-action rifle may seem like an archaic choice in an era of automatics, but they don’t require an external loading device, are not ammo sensitive, have no moving parts and are remarkably accurate. When it comes to affordable and durable lever-action .22s, few guns can match the Henry.

This versatile rifle can utilize, not only .22 LR, but .22 Long and .22 Short. Allowing the shooter to select the ideal ammo for whatever game he/she wishes to harvest without having to worry about jams. Just make sure to select a round powerful enough to leave the barrel.

While the Henry might not be the most user friendly rifle to reload, its magazine tube’s deep ammunition stockpile (15 rounds .22 LR, 17 rounds .22L, 21 rounds .22S) allows the shooter to carry enough to feed the whole group without reloading. The Henry’s size, however, limits most shooters ability to easily pack the weapon, as do the ultra-fine, traditional iron-sights.

A survival rifle in every sense. (Photo by David Higgbotham)

In 1958 the famed designer of the M16, Eugene Stoner, designed a light-weight .22 survival rifle for the United State Air Force to install in aircrafts. In the event that a pilot needed to ditch his aircraft, he would have more than just his service revolver to harvest game or neutralize hostile fauna. One of the most unique features about the AR-7 is that it breaks down to fit into its own stock and floats.

The AR-7 is ultra-lightweight, semi-automatic and features user-friendly aperture or ‘peep’ sights. While not as accurate as the lever-action Henry, the AR-7 is accurate enough to harvest small game at 25 to 50 yards reliably. The Henry’s shortcomings are the generously-sized iron sights, which obscure smaller targets and a heavy, spongy trigger, which makes accurate shots more challenging.

Rifle fun in a portable package. (Photo by David Higginbotham)

The king of rimfires reigns again with Ruger’s 10/22 Takedown rifle. With the widest selection of aftermarket accessories of any rimfire weapon, magazines ranging from five to 100 rounds and million of fans posting thousands of how-to articles and videos, the 10/22 only limit is your budget. The Takedown variation comes with a purpose-built backpack and takes only seconds to break down into two parts.

This mobility comes at a slight cost of modularity. The 10/22 Takedown can only use special furniture, although standard furniture can be modified to fit.