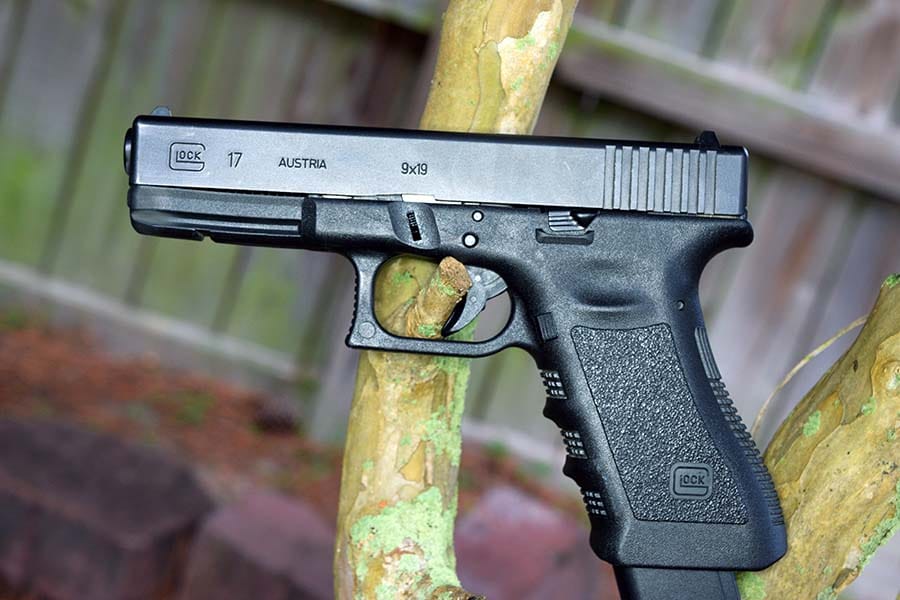 A third generation Glock 17, the original and still one hell of a pistol. (Photo: Jim Grant)

The downside to making the most prolific pistol in the world is the amount of criticism your product faces from seeing such widespread use. The Glock pistol suffered its success from ultra large-scale testing, since so many different departments adopted it.

When Gaston Glock began developing the weapon for Austrian military use in 1982, he probably didn’t envision tailoring the grip for the hand shape and size of both genders of every race on the planet. In all likelihood, Gaston developed the weapon to fit the hands of his larger Nordic countrymen. Consequently, many issues impacting smaller shooters came to light. While the biggest complaint dealt with grip size, shooters accustomed to single action only weapons weren’t thrilled with the striker-fired Glock’s safety trigger. There are other issues too, but most impact only a tiny percentage of shooters. Thankfully, with five factory-made upgrade parts, your Glock can overcome every major complaint against it. 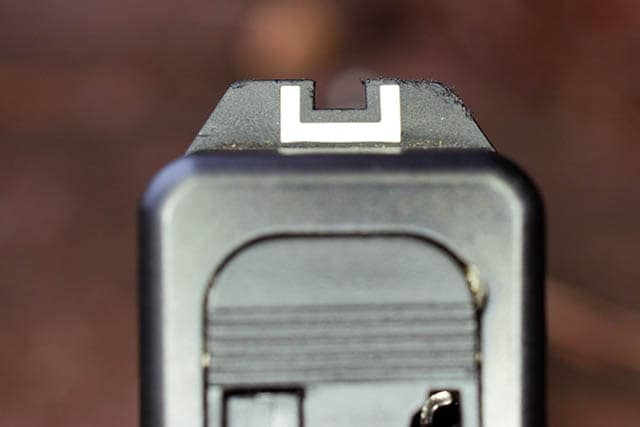 Glock sights are durable, but as you can see here, wear over time. (Photo: Jim Grant)

One of the minor concerns shooters have voiced, is with the durability of the Glock’s iron sights. Constructed from high-impact polymer, these fixed sights are difficult to break and cost less than five dollars to replace. Given, you’ll need a $35 sight tool, but you can borrow one from a friend or attend a Glock Sport Shooting Foundation match and they’ll install them for free. Some shooters don’t trust plastic sights, so Glock offers steel replacements for $35. If the sight’s durability doesn’t worry you, maybe finding them at night does. In that case you’ll want to opt for a set of factory-installed night sights on your Glock. These sights have two vials of tritium in the rear and one in the front sight post, that have a soft green glow which is visible in low or no light conditions. 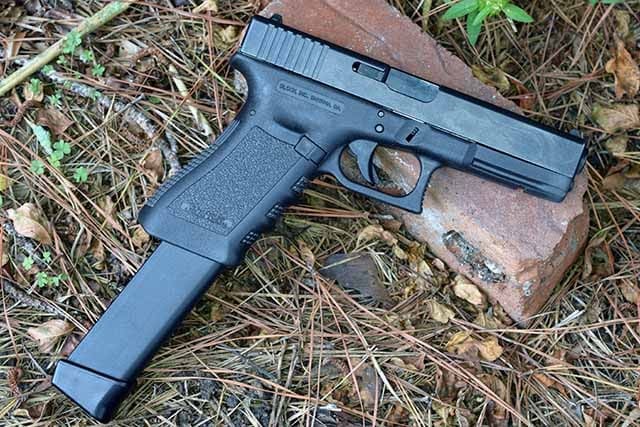 While 17+1 rounds is normally more than enough for most shooters, sometimes it’s nice to have 33. (Photo: Jim Grant)

While the original 9mm Glock holds 17+1 rounds of ammunition in its magazine, some owners want more. Thankfully for them, if a shooter runs anything other than a .45 ACP or 10mm Glock, they can buy factory-made, extended magazines. In the case of the 9mm parabellum Glock 17, 17L, 19, 26 and 34 models, they can all use the larger model’s magazines. While there isn’t a model larger than the 17 or 34, they can use magazines intended for the fully automatic Glock 18.

The obvious downside to utilizing these magazines is that it effectively destroys the pistol’s portability and concealability. This is why these extended magazines make great backup mags. It might seem like overkill, but having a Glock 17 with a 33-round extended magazine means not needing a reload while defending your loved ones, even if it makes you look like Neo from The Matrix. 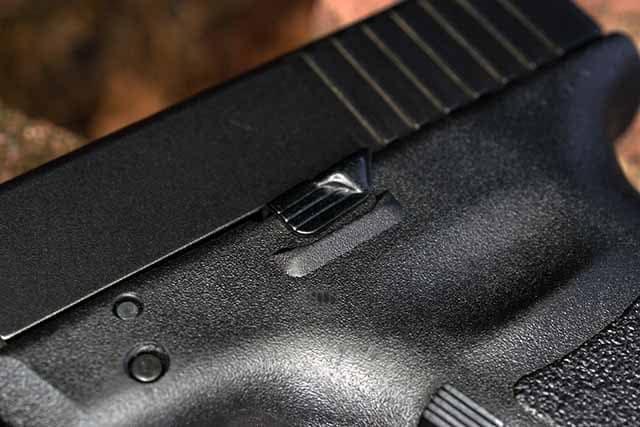 Shooters with smaller hands often find the Glock’s controls just out of reach while maintaining a proper firing grip. For years, they’ve been told to either shift their grip to actuate the slide’s release, or simply pull back on the slide to release it. While racking the slide is the preferred self-defense method of chambering a round, because it requires less fine motor skills, it shouldn’t be the only method available. Good habits aside, what about a shooter who either doesn’t have the use of their support hand, or lost use during a firefight? Yes, they can rack the slide by dragging the rear sight against their belt, but simply pressing a lever is undeniably faster. Fortunately, when Glock introduced its competition line of handguns, the company added an extended slide release lever to speed up competitors’ reloads. This factory part can be installed on any Glock of the same generation. Fourth generation Glock pistols use their own, but second and third gen models are interchangeable. 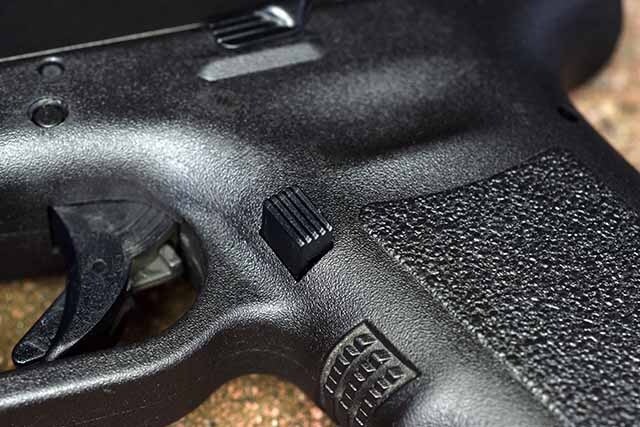 In another nod to smaller shooters, Glock also offers an extended magazine release button that is normally part of its competition line of handguns. While larger individuals will find this addition unnecessary and cumbersome, smaller-handed shooters will enjoy the ability to drop empty magazines while maintaining a proper shooting grip. Under dry conditions this may seem trivial, but with a wet or oily weapon, rapidly shifting a shooter’s grip on a pistol could have disastrous results.

This part doesn’t need to be installed by a gunsmith, but is one of the more frustrating pieces to install. 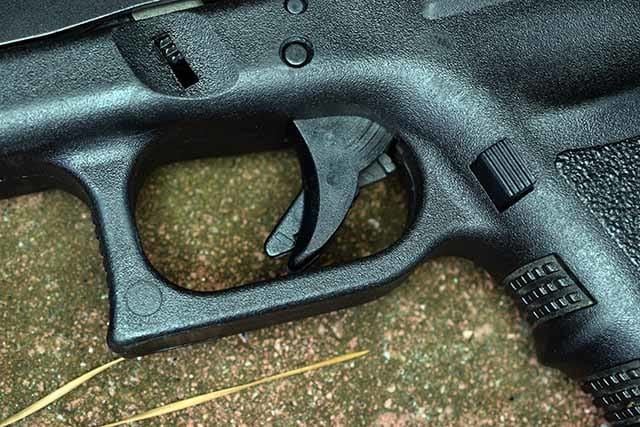 With a three and a half point disconnector installed, the Glock’s trigger is more on par with the Springfield XD and M&P. (Photo: Jim Grant)

5. Three and a half pound disconnector

Factory Glocks ship with a five and a half pound trigger that can make quick, accurate shots very difficult for shooters unaccustomed to the safety trigger. Replacing the standard disconnector with the factory-made minus, reduces the trigger pull by two pounds. This makes the trigger light enough that shooters can speed up their splits, without having a dangerously light trigger. Though this part is fairly straight forward to install, shooters should make sure to reinstall the trigger spring correctly. Improper installation prevents the trigger from fully resetting when the slide is racked.

While none of these improvements can guarantee to make Glock shooters better, they certainly can make the pistol better fit them. Just like baseball players using a bat that’s too big, shooters with an ill-fitting gun will find it very difficult to hit that sweet spot. Adding any of these parts is an inexpensive way to increase a Glock’s shootability in a few short minutes. Once a shooter’s weapon fits them properly, the only thing standing between them and greatness is practice.