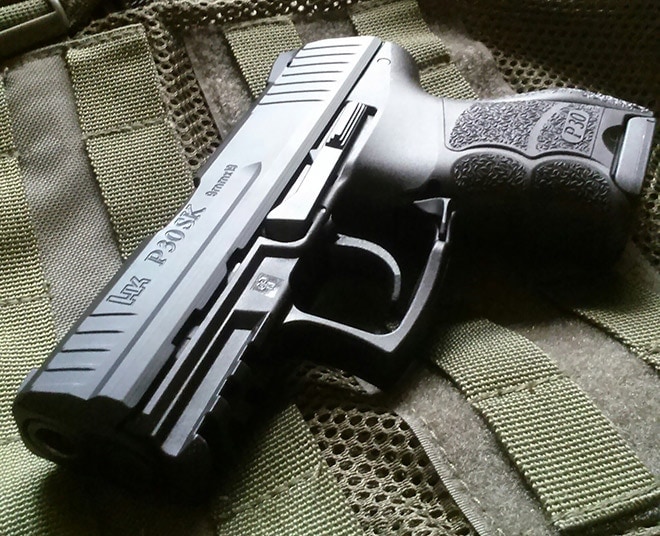 Gun companies have gotten smart about extending pistol lines to accommodate users in both the full-size and compact markets.  The advantages of a “fun size” version of your duty or range handgun are many. Nearly identical controls mean your hands only have to develop so-called muscle memory one time for two guns. That means greater efficiency for all the actions required to be effective in a shooting match or lifesaving gunfight. Compact versions of range guns usually accommodate full-size magazines, making a gun collection class- and practice-friendly, especially if one piece of equipment is down.

Here are five “Mini Me” pistols worth checking out and maybe adding to your collection. To keep the field comparable, all are chambered in 9mm. Many are also offered in other calibers.

Legendary dependability and, with Gen 4 models, user-friendly modularity, make the G26 suitable for most shooters. Standard mags on the full-size Glock 17 hold seventeen rounds.  The 26’s mag holds fifteen, and its four-inch barrel makes it one of the bulkier compacts on this list, though it weighs in at less than 22 ounces.

Glocks are commonly, and justly, criticized for their less-than superb polymer sights. Thanks to the popularity of the brand and broad parts compatibility, there are plenty of aftermarket options.

Be ready to shell out healthy sums for these modern standbys. Gen 4 models of the G17 retail for around $600, while the same model of 26 is typically priced in the mid-$500s.

Ruger’s compact version of its relatively new American striker-fired pistol isn’t just a smaller clone. Released in 2016, the Compact is built to US military specifications throughout, and was subjected to mil-spec torture tests, even though the company didn’t build it with the intent to bid on government contracts. Both models incorporate years of customer suggestions, with the Compact especially having been made with concealment-friendly features like Novak low-profile sights. Ambi controls and optional slide safety are also reflective of customer influence.

Taking a cue from customers and perhaps existing trends, the American series includes modular grip options. The magazine holds 12 rounds, and its bigger size makes it the heaviest gun on this list at just under 30 ounces unloaded. Color options are a predicted development for late 2017 and beyond.

While it took Ruger a while to step up to the plate in the crowded market of striker-fired options, they take the cake for listening to customers and aiming to please with features and affordability. The American Compact is affordably priced in the high-$300 range, a surprising bargain considering its durable construction.

Smith & Wesson’s well-established Military & Police series appears to be phasing out the plain but functional 9C.  Capacity is generous at 12 rounds, with lots of brand and aftermarket mags and extensions available. While not as popular for concealed carry as the slimmer M&P Shield, the 9C retains the accessory rail, making it a great choice for home or car defense.

With a 3.5-inch barrel and weight of 21.7 ounces unloaded, it shares with the Glock the distinction of being the lightest gun on this list. In addition to the customizable grip inserts now expected in its class, the 9C comes with or without a thumb-operated safety, and is (was?) offered in desert tan in addition to black. Prices vary widely for identical models. Depending on location, prices are between $300 and $500.  Maybe we’ll see a compact version of the full-size M&P M2.0 series in 2018.

The only double-single action firearm on this list, the P30SK is well known for reliability and quality of construction. With a 3.27-inch barrel and ten-round magazine, it’s also one of the smallest. HK has modernized this popular platform with their unique three-way custom grip system and prominent three-dot sights with optional night sights. Controls are fully ambidextrous. Despite the short barrel, HK engineers managed to retain an abbreviated Picatinny rail on the gun. Though most rail-mounted lights are sure to protrude substantially, it can wear them.

As with most HK products, expect to pay extra for all that German engineering. Typical prices are north of $500, with night sight-bearing copies sometimes breaking the $600 mark.

This new release from HK is the only one I’ve not personally tried. Having put a few thousand rounds through its predecessor, the VP9, I’ve only positive expectations for this scaled-down version. At 3.39 inches, the barrel is comparable to the DA/SA P30. Little details that make the VP9 special, like charging-assist inserts on the slide, a rail, and a roomy trigger guard, are included. The slide release is all-ambi, all the time, and the magazine release is a paddle design. I normally oppose ambi mag releases that aren’t “turned off” on the non-dominant side, but the paddle overcomes the possibility of unintentionally releasing the mag from pressure exerted by seatbelts or other external forces, as it will always be shielded by a holster, at least in the possession of responsible carriers.

Many VP9 owners have been waiting for this gun. The VP9 SK is now widely available, with prices ranging from $540 to $640.

Much as I’m a fan of Picatinny rails for extending the usefulness of carry guns, I expect that the rising trend of rail-less models will continue. With the growth of Streamlight’s TLR-6 trigger guard-mounted light-laser line, which will surely be followed by other competing brands’ auxiliary systems, the need for a rail is eliminated. I’ll go out on a limb here and make a prediction that, within five years, major gun makers will release red dot sight-bearing versions of existing compacts. It’s my hope that, within 10 years, those new sight systems will shrink in size with no loss of rapid aiming convenience.