The Ruger 10/22 with a standard ten-round rotary magazine in 22LR is the definition of a utilitarian rifle.  Here’s why:

Isn’t reliability the most important feature of any firearm?  For a semi-auto rimfire, the 10/22 is the most trouble-free I’ve seen.  It’s capable of sending 200-plus rounds downrange before needing maintenance and while that’s no feat compared to its centerfire counterparts, it manages the excessive amounts of carbon that are produced by 22LR better than most in its class.

On heavy-use occasions, when my 10/22 gets gummed up and there’s still more shooting to be done, I’ve had great luck with a squirt or two of aerosol Remington Action Cleaner.  A couple squirts right into the action returns a stream of sooty liquid, proving to me it’s working.  After a dab of lubricant, the gun is ready for more.

Ruger has at last come out with its own version of greater capacity magazines for the 10/22. These have proven more reliable in comparison to choices from the secondary market, at least for me. 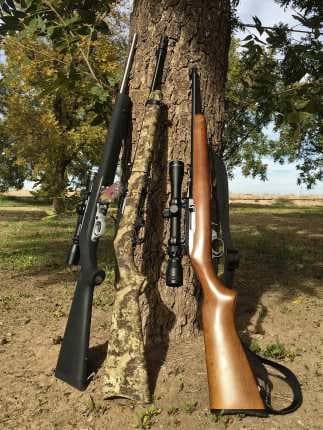 Along with being reliable, these little rifles are as accurate as the shooter is ready to be, within the range of the load (of course, ammunition quality plays a role in accuracy too).  It’s not only rewarding to shoot, its dependable accuracy makes for humane hunting and vermin/varmint control.

Ruger is known for making trusty firearms at prices that won’t break the bank.  With most models priced well below $300 new, and even the popular takedown model being in the low $300s, Ruger rifles are within reach for most shooters.  While 22 ammunition is no longer ridiculously cheap, the per-round price generally beats most calibers and availability is again consistent, at least if you include mail order outlets in your shopping.

Although it doesn’t have the simplest construction, there are a wide array of online tutorials showing how to get inside and then repair or modify various parts of the 10/22.  Parts are readily available and affordable.

5. There’s one for everyone

A wise business strategy on Ruger’s part is to constantly crank out new renditions of proven platforms.  The company offers the 10/22 in a carbine model, handy for young shooters and truck/ATV carriage, a bull barrel model for competition shooting, a takedown version for hikers and trappers, and a host of other profiles and finishes.  The Archangel company makes kits to convert a vanilla 10/22 into a modern precision or sporting rifle, or to at least have the appearance of one.

The 10/22 is a Toyota among rifles in terms of availability and value.  Although there are countless examples in circulation listed at varying price points, expect to find well-maintained, used guns selling for a figure close to their retail price when new. For a gun widely available to the common person, that’s quite a good deal.

Grandpa’s 10/22 squirrel gun is also the perfect rifle for teaching a grandchild or teen to shoot.  It makes a practical heirloom that can hold cherished memories, yet be modified to suit the preferences of any new owner.

The 10/22 is an all-around great choice that any shooter should have in their collection. For reliable function, sustained value, and enjoyability for the whole family, it’s hard to beat.