Canik’s latest rendition of the TP9, in single-action only, is being called a serious threat to the popularity of Glock’s Generation 4 model 17. Over two months, we put these guns to the test, with experienced and new shooters. Here are the results: 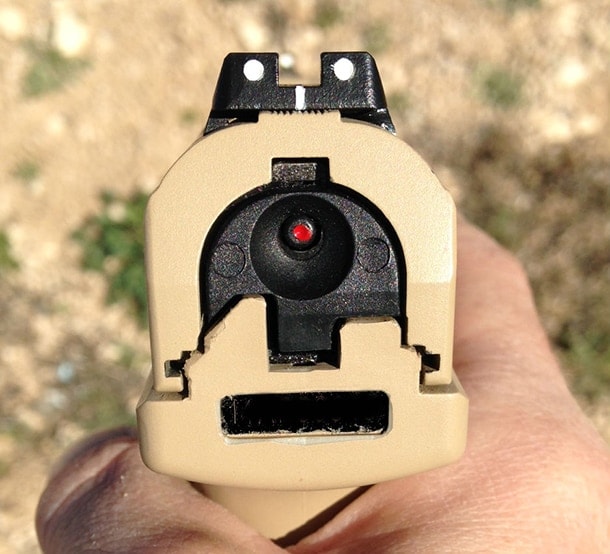 Canik wins, by a nose. The slightly deeper grip fits more shooters than the G17. Both models offer interchangeable backstraps, but Canik offers only two. Differences in felt recoil are negligible. Despite the TP9 SA having more steel, there’s no perceptible weight difference between the two. Stippling is comparable on both, with enough grip for all but the most sweaty or sunscreen-slathered hands.

With a three-dot sight system and unique underscore highlighting the front sight (see photo), Canik is the winner here, for both innovation and ease of alignment/sight picture acquisition. This intuitive design is especially inviting for new shooters. Both models have adjustable sights. The Canik’s are steel; the Glock’s aren’t. Though there are complaints aplenty about standard Glock sights in some circles, this shooter has never had a problem with breakage, but then again doesn’t regularly rack the slide on inanimate objects.

Out of the box, the Canik was aligned perfectly. In our testing, (bringing numerous other Glock experiences into the mix here) it’s become expected that the Glock’s factory-set point of impact is slightly left of desired. 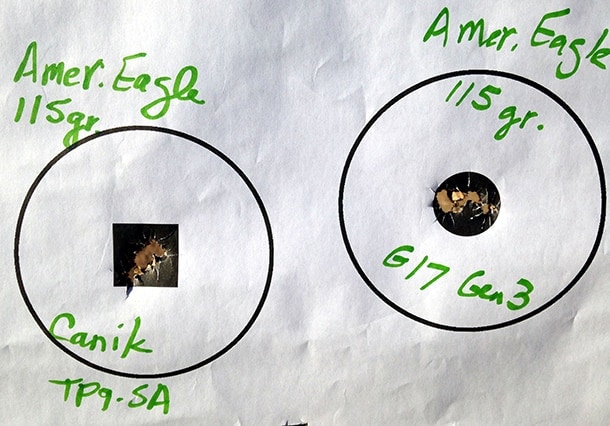 Both handguns easily shoot a ragged single hole at 7 yards. Beginners will find accuracy easier to attain with the Canik, probably because of the sights’ design.

Glock is legendary in this regard. Some sources claim the Canik has passed the 65,000-round test required by the weapons manufacturer for the Turkish military. Neither has ever malfunctioned. This particular Glock has cycled at least 5,000 rounds thus far, its replacement recoil spring still waiting patiently in the range bag. 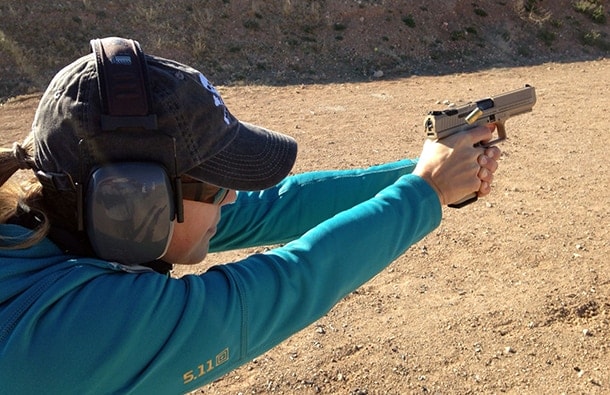 If we must have, as one commenter called it, “the typical American obsession with trigger operation,” then the Canik wins. The major revision from the TP9 to the SA model was the addition of an excellent, single action-only trigger. The pull is slightly smoother and shorter than the Glock’s, with a cleaner break and shorter reset. That being said, stock Glock triggers work just fine. Both feature a safety lever on the front face of the trigger. 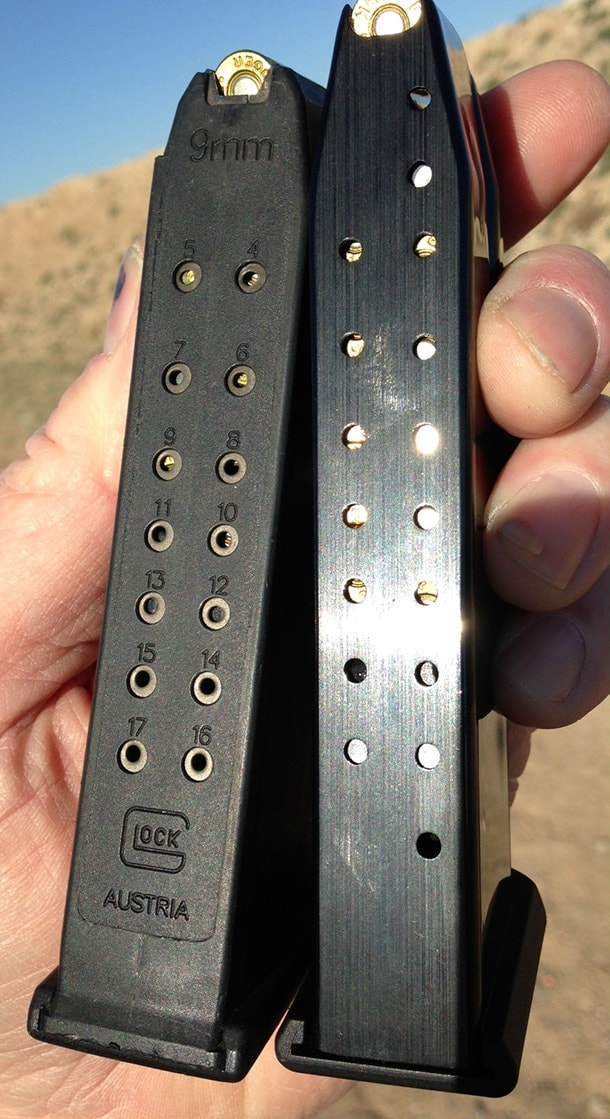 A narrow win for the G17. Glock’s lightweight mags fall freely when released, come three per new gun, and have a primer-side holes to show full-through-empty status with corresponding stamped numbers. Canik’s lightweight steel magazines are made by Mec-Gar, the Connecticut-based manufacturer that produces magazines for Smith & Wesson, CZ, Sig Sauer and others. They also fall freely from the well. It’d be nice if they were also stamped with a round count in addition to the load-status perforations on the rear. Spare mags for the TP9SA are finally available online. Both brands’ mags are priced in the low-$20s.

A draw. This factor is quite subjective. One salesman commented that Canik’s version of desert tan is lighter than most. It also comes in black. The G17 is available from the factory in black, flat dark earth, olive drab and desert tan. Suit yourself… obviously, the finish on the G17 in this test is custom.

Another draw. Both models are easy to take down and reassemble. Both break down into four easy pieces for cleaning. Both are fun range guns and impractical for most to consider for concealed carry. 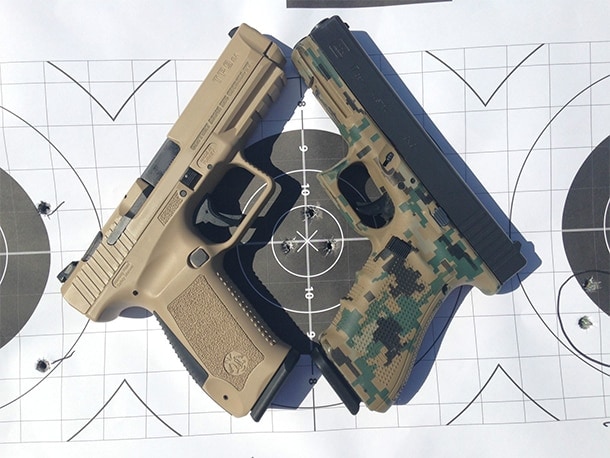 Canik, side by side. (Photo: Eve Flanigan)

Is of course, the responsibility of the handler/shooter. Those who don’t like Glocks for their lack of a consciously disengaged safety won’t like the Canik for the same reason. It bears mention here, the company provided a “safety” device in the form of a striker-disengaging feature, operated by pressing downward on levers on the top corners of the slide, between the ejection port and rear sight. The company states this is to eliminate having to press the trigger to being takedown. In my opinion, if a person doesn’t clear their gun before cleaning, they shouldn’t be handling guns in the first place. 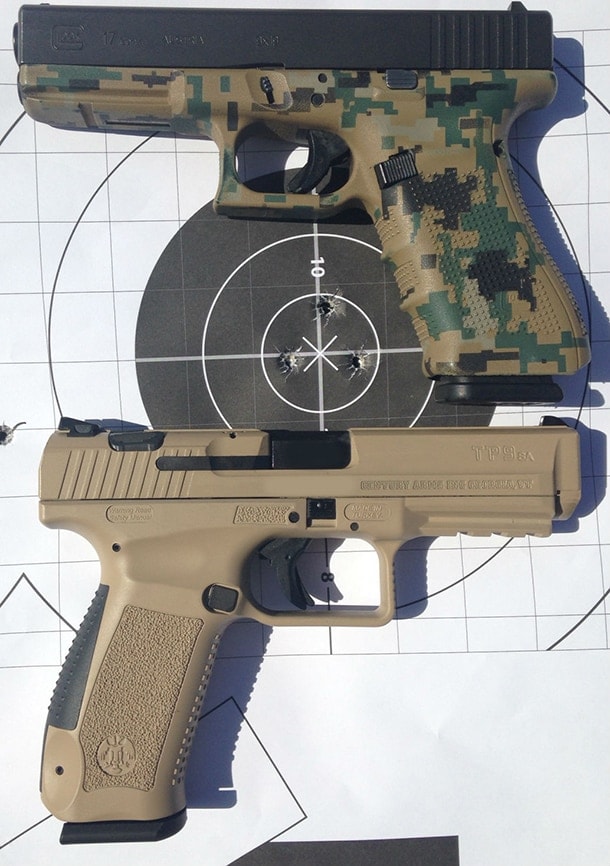 Both the Glock and the Canik ate whatever ammo we fed them. (Photo: Eve Flanigan)

This feature appears to be a holdover from the old TP9 double/single action model. The best things that can be said here are that the contrasting black lever on the tan slide is attractive, and the striker has, to date, not disengaged unintentionally. It takes firm pressure to disengage the striker. The levers are unnecessary, and the biggest safety concern with it is that, in a chaotic defensive encounter, the striker could accidentally disengage when it’s needed most. Not likely, but possible. Resetting it is a simple matter of pulling the slide back as little as ¼ inch.

Both are winners, with outstanding dependability and savings on practice ammunition. Century Arms wasn’t consulted before this test. A Glock factory rep stated there is no recommendation against using less expensive aluminum-cased ammo in their guns.

Sure, there are minor compromises in accuracy and perhaps accelerated extractor wear with cheaper ammo…but the price of the latter is probably a wash over time. When magazines were stuffed with a random mix of Perfecta brass-cased and Federal aluminum and brass-cased rounds, both guns ran flawlessly.

Does it even bear mention that there are more Glock (and Glock-fitting) parts, modifications, bells, whistles and stickers on the market than any other brand? There’s a stark comparison here. The Canik comes with a paddle holster that operates with a retention device akin to the controversial Serpa by Blackhawk. It works well. 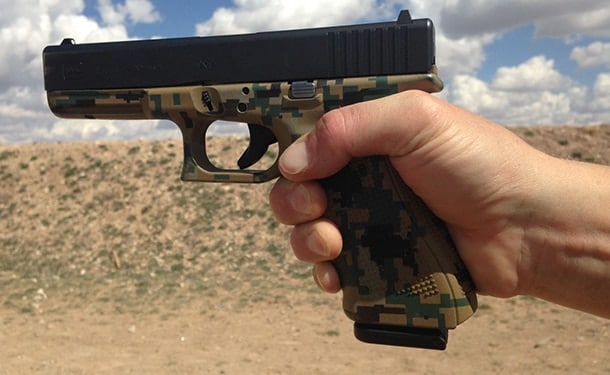 Many, many after market options exist for the G17. (Photo: Eve Flanigan)

There are apparently no other rigid holsters or magazine pouches currently available for this gun—a serious drawback. There are plenty of cloth/nylon holsters for the TP9, which will probably accommodate the SA. A Fobus magazine pouch made for the Springfield XD provides an acceptable fit for basic practice. For practice that involves going to the ground, running, or other physical gyrations, a small patch of the soft side of hook and loop material, with adhesive on the back and installed inside the pouch, ensures a secure fit.

In terms of other goodies that come with these guns new, they’re very comparable. Both are delivered in a hard-sided case with a cleaning kit, manual and tool for changing backstraps. Glock provides three backstrap configurations. The Canik has two choices that seem to fit everyone. Too bad Canik doesn’t make a line of shirts and swag, their Turkish eagle logo is striking in comparison to Glock’s rather plain trademark. 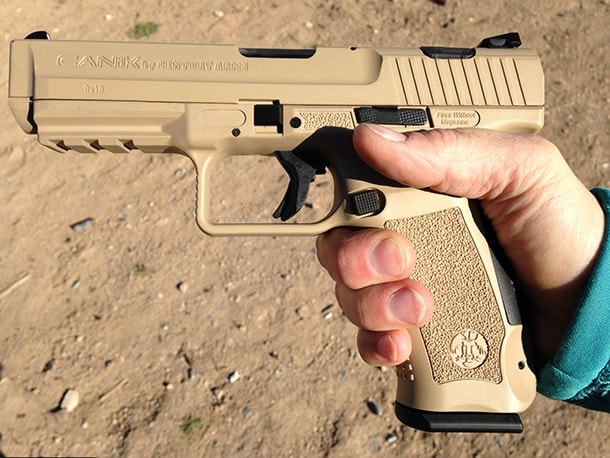 Hands down, the Canik TP9 SA delivers more for the money. Distributed in the U.S. by Century Arms, current retail is around $370, with the black models available for as little as $340. The Glock 17 Gen 4 retails for approximately $540.

The best choice between these closely matched handguns comes down to personal needs and preference. The biggest contrast is the abundance of accessories and parts available for the Glock 17 Gen 4, while the Canik TP9 SA, distributed and branded by Century Arms, delivers parallel quality while fitting the hands and wallets of more shooters.