Gear Review: A tale of three charging handles—is a HABU for you? 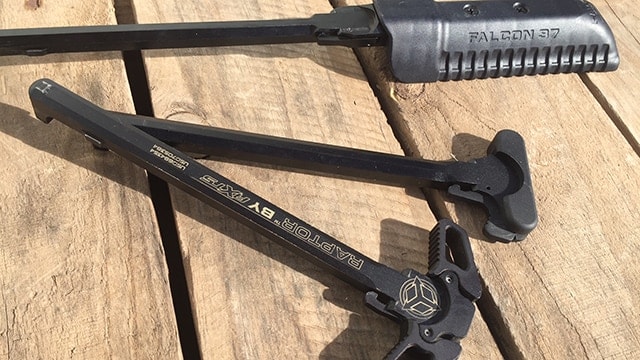 Until recently, I was aware of two types of AR charging handles—mil-spec or a variant thereof, with the latch on the left side only, ambi, with latches on both sides, and now something completely different—the cuff-like HABU, which runs along the top of the buttstock tube. I’ve used all three, and as a naturally ambi shooter, have formed what I feel are informed opinions on the positive and negative aspects of each one. If you’re building your first AR or considering a charging handle upgrade, here are some points to consider.

Milspec charging handles are functional and economical. Starting at around $20, they’ll run all day just as they are. Upgraded metals and extended levers will increase the price, in some cases to just under $100.

With age-related changes to my vision and in an attempt to be a more versatile shooter, I began to shoot primarily right-handed some years ago. Without a doubt, milspec charging handles are easier to run with the left hand acting in a support role. An added bonus: most class demos were easier to follow since right-handed technique is inevitably demonstrated first and more often.

Ambi charging handles feature a release lever on both sides of the “T” and can be operated with the same action of the right or left hand. Prices scale up for this custom piece of kit. I spent $85 on my Raptor brand ambi handle when I grew frustrated that my so-called left-handed AR, a Stag 2L, was still a right-hand bias rifle with its milspec charging handle and safety.

The Raptor handle became my overnight favorite, but wasn’t without a downside. I can reach up and rip the handle, now mounted in my Battle Rifle Company Cutlass, without much thought or even effort, regardless of which hand is operating the trigger. When I sustained wrist injuries that became chronic, I realized new value in the ambi setuip in that I could hook my index and middle finger around each side of the handle for extra leverage and an even pull that keeps pain at bay.

A clear negative of the ambi handle became evident when, after a season of running, literally, with the Cutlass on a regular basis, I borrowed a friend’s lighter AR for a CQB class. Suddenly, the split-fingered technique I’d been using on the Raptor didn’t move anything. It only took a few reps with the old milspec design to get into the groove again, but there’s something to be said for having a feel for how the gun one’s likely to pick up in an emergency is going to operate—and it’s not with an ambi charger.

The HABU Mod 1 Advanced Engagement Charging Handle—let’s call it the HABU for short–is a whole new design in charging handles. Designer and manufacturing company, Falcon 37, President Steve Parker sent me a HABU to try out. While it accomplishes the same simple task of pulling the bolt carrier group rearward, the HABU has an inline handle that’s made to be grabbed, preferably overhand, and pulled back in the same fashion as racking the slide of a semiauto pistol. 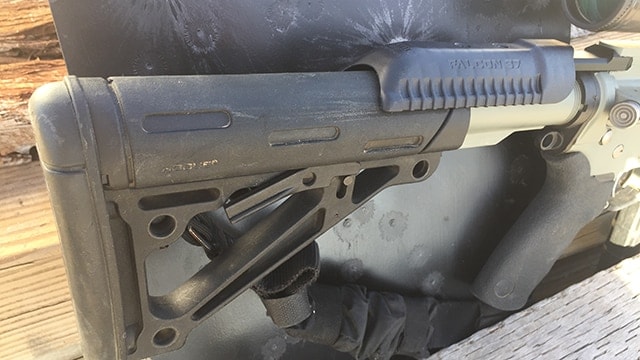 The “one simple motion for many tasks” adherent in me likes this design. It just makes sense to charge the AR the same as the pistol on my hip. The messy-truck, crowded-safe keeper in me adores the low profile of this charging handle—there’s no chance of a “T” catching on stuff when pulling the gun out from wherever it’s stashed. In a crisis, that bit of simplicity matters a lot.

What I’m less crazy about is that the HABU doesn’t fit well on every stock—including the fat Hogue stock on my Cutlass. It’s make for a milspec tube, and though it’ll run across the Hogue’s, it takes a bit of push, and I did manage to slightly gouge the rubber covering on the stock. 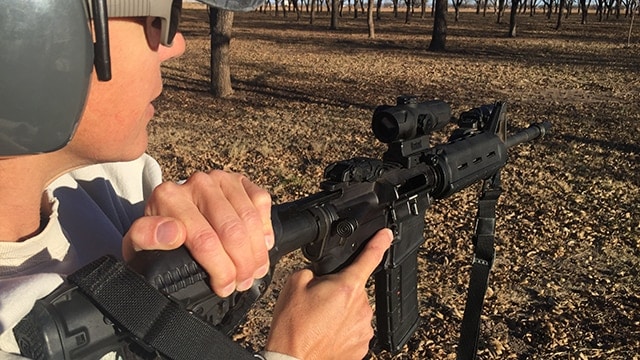 Using the HABU is fast—I can tuck the butt of the stock into my armpit and run this handle quick, whereas operating even the ambi handle is easier if I fully unseat the rifle from firing position, especially when encumbered by a chest rig or puffy coat. The low profile just keeps the whole package easier to operate. 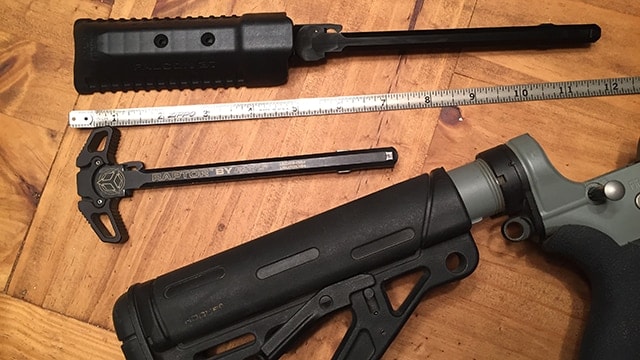 Even on its shortest setting, the HABU is about a foot long. (Photo: Team HB)

A downside to the HABU is, even on the shortest of two available length settings, there’s not enough room to get a full stroke to load or eject a round when the stock is fully collapsed. Sure, as I was told when I mentioned it, “most people don’t use an AR that way,” but there are a few examples in the civilian CQB world and plenty more in law enforcement, deploying the MR from behind the steering wheel, where that may be the only choice. It’s a limitation the individual user will have to decide is important or not, in exchange for lightning-fast charging other times.

The HABU also acts as a cheek rest. Depending on your sighting system, this could be a boon to comfortable shooting and rapid target acquisition. Or, it could spell frustration. I had both experiences. With the Hogue stock and a magnifying scope, I found myself unable to get a shadow-free view. However, on a standard AR outfitted with a Bushnell Enrage red dot, the cheek support was just right. Since the company advertises a satisfaction guarantee, there doesn’t seem to be any risk to trying it on your own system to be sure if it’s a fit.

HABU stands for “hook a brother up,” a reflection of Parker’s sincerity and solidarity with the military and law enforcement communities. The former Marine is based in North Carolina and founded Falcon 37. Current sticker on this charging handle is $89.95; add $10 for the AR10 model.