Talk of the blue plastic German practice ammo (AM 32) fills up forums left and right because they’re cheap and folks generally want to know what they’re used for and if they work. So while the forums fill up with chatter, Guns.com went ahead and tested some out.

I knew there had been other experiments with plastic casing and projectiles, but I had never heard much about the results. So I spent about 2.5 seconds on the Internet and had a couple of boxes of AM 32 headed my way. These are German surplus 7.62×51 NATO practice rounds, circa 1990.

These are some strange looking rounds. The Smurf blue case is plastic. The 10-grain bullet is also plastic. The “bullet” is actually part of the case. The bullet and case are one. The case/bullet is filled from the bottom and capped with a brass end, which holds the primer. 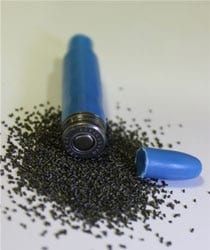 When the charge is ignited, the plastic case deforms to fit the inside of the cylinder (as would a brass case). But the pressure breaks the bullet looking end off of the case and sends it zipping downrange.

These rounds were designed as short-range training rounds, so the projectile is potentially deadly at close range. But let’s be clear about this—the AM 32 is a practice cartridge. They won’t even help you to sight in a weapon if you plan to shoot any other rounds.

Not too bad, but they are plastic. There were some obvious questions I tried to answer.

Will the cases melt in a hot gun? I’m still not sure, but I couldn’t get one to cook off.

Would the friction of the “bullet” on the lands in the barrel melt the projectile? Apparently not. I cleaned the gun immediately and didn’t see any real differences.

They don’t have enough oomph to cycle a semi-automatic with a heavy bolt like a Garand, but it has been reported to work with rifles with a lighter bolt like a HK G3, according to others who have tested it.

The powder charge is small, but plenty hot enough to send a 10-grain plastic pellet zipping out the end of the barrel.

In the end, they do go bang and at five for a dollar it is an inexpensive way to run a .308.

Though AM 32 practice rounds are somewhat of a crude design and currently more companies are evolving aspects of it. Companies like PCP Ammo have adopted the plastic case, while others have adopted the plastic bullet concept. Always on Target has developed an entire training system around the plastic projectile. All of the reviews I’ve found of the Always on Target system suggest it, as a system, does everything the AM 32 hoped to accomplish, but much better. Short range, accurate and dependable. But their cases are still brass.

After running through a box of the AM 32 bullets, I have a hard time seeing them as anything other than a novelty. They could be useful in demonstrating the basic function of a .308 for a group of new recruits, or Boy Scouts—a group who has never shot rifles. But the rest of us?

SGAmmo, where I bought my Smurf rounds, says that you can shoot these in indoor ranges. That could be a big asset for those who can’t shoot outside very easily.

PCP Ammo may be the first to truly get the picture. Plastics for, not the bullets, but the case! Plastic is cheaper than brass. And lighter. PCP Ammo claims that their plastic cased ammunition is half the weight of the old fashioned rounds. If it is true, it is time to invest.

AM32? A historical footnote. But the plastic case and the plastic bullet are ideas whose time has come.