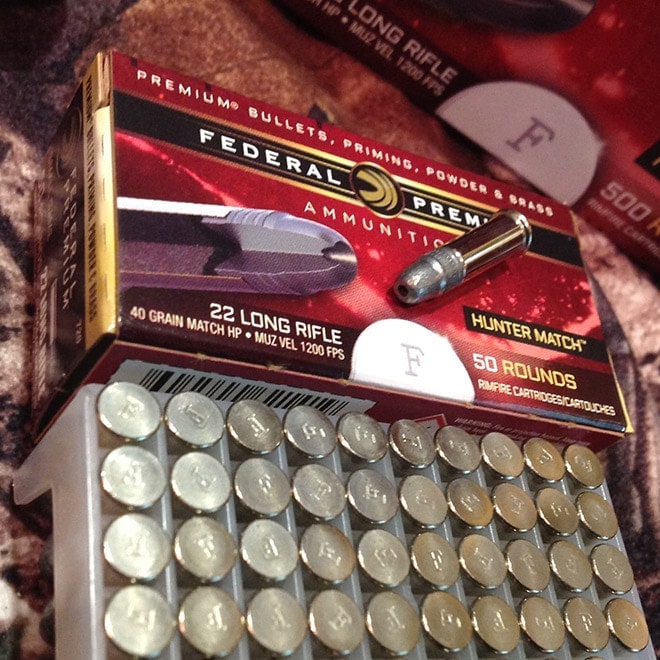 Squirrels, run for your nests high in the treetops; prairie dogs and cottontails seek safety in the fields.  An ammunition manufacturer has finally realized that we 22-caliber rimfire hunters seek superior ammunition and centerfire accuracy, too.  Enter Federal Premium’s 22LR Hunter Match.

What is Hunter Match 22

Federal Premium Hunter Match is the first match-grade ammunition built for and marketed specifically to hunters.  With a hollow point bullet designed for maximum killing power out to 100 yards, Hunter Match extends the range of serious rimfire enthusiasts.  Available in bricks of 500 consisting of individual 50 round boxes, or simply as individual boxes, Federal Premium Hunter Match is just now hitting the market, though the wait for availability may take some time as demand and production converge.

The 40 grain lead hollow point bullet is geared toward small game hunters targeting squirrels, prairie dogs, rabbits and the like.  With a muzzle velocity of 1200 fps, these high-velocity rounds, according to the company, “provide flat trajectories and energy to take down any target.”  All are loaded in nickel plated casings for reliable extraction and corrosion resistance.  Best of all, they are Made in the USA. 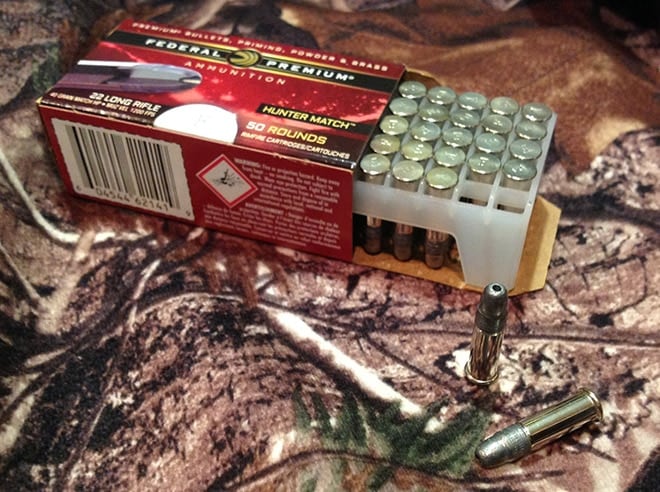 Available in these 50-round packs or a full 500-round brick, the new Hunter Match rounds are devastating on small game. (Photo: Kristin Alberts)

We’ve had the pleasure of spending both days on the range and in the woods with the Hunter Match ammo in a variety of rifles and pistols, from single shots to bolts to fussy semi-autos.  One thing is certain from all the shooting — both the load quality and quality control on these rounds are top notch.  Though I can say I’ve had FTF’s, FTE’s, and just general poor performance at one time or another from just about every mass produced rimfire round on the market, the Hunter Match ran with 100% reliability through over 500 rounds.  That means not one single failure of any kind, and more importantly, no wild flyers during the accuracy testing. 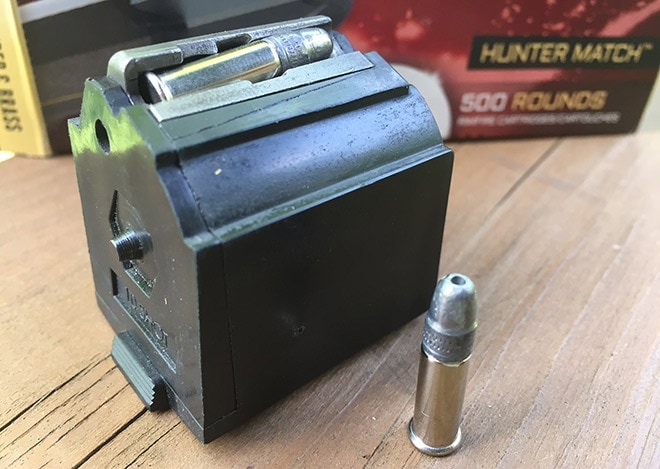 The Hunter Match hollowpoint with a full mag for the Ruger 10-22 rifle. (Photo: Kristin Alberts)

The nickel plated brass is well prepared and clean in appearance, which, while being attractive, is also practical, aiding in smooth extraction and corrosion resistance. The company advertises that the HP bullets are “tuned for long-range expansion” and that seems to hold true.  We found exceptional knockdown power on small critters like squirrels out to 75-85 yards.  Though the company advertises bullet performance with the proper mushroom at 100 yards, we were not able to recover any bullets from game at or beyond the football field mark.

While much rimfire hunting may take place inside of 50 yards, the Hunter Match really shines at those 50-100 yard ranges.  That may not sound like much, but when you are serious about your hunting passion, why not maximize your opportunities in the field?  I know I’d rather come home with a full stringer of squirrels for a winter stew than one lone tree rat, or worse yet, empty handed.

In the field and on the range

We fired Hunter Match from the Ruger Mark IV Hunter semi-auto pistol at ranges from 15 to 40 yards with above average accuracy when compared with some of the big names in standard bricks of 22 caliber ammunition.  On a makeshift range at Mossy Oak’s recent industry event, we ran plenty of mags full through Savage’s new A22 rifle.  As fast as I could pull the trigger, this stuff would cycle.  It’s a credit to the ammunition that it cycles flawlessly in semi-autos, because, let me tell you, not all rimfire ammunition does.  In fact, guns like the A22, as well as many of the AR-style rimfires, specifically dictate using certain higher velocity ammunitions in order for the gun to run reliably. 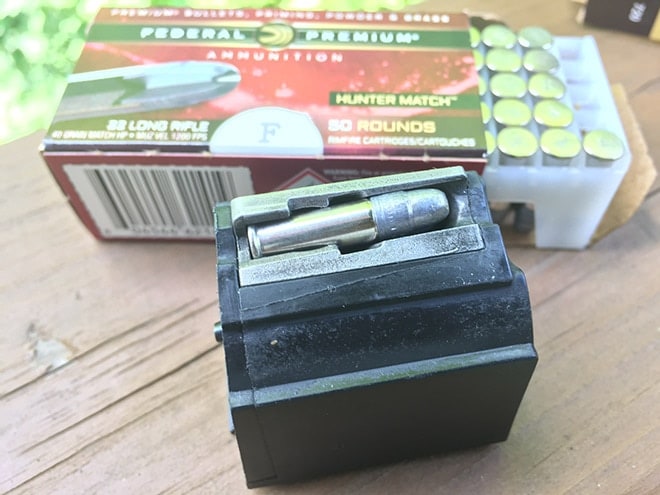 A full 10-22 mag loaded with Hunter Match for a day in the woods. Hunter Match runs well in semi-auto rifles and pistols. (Photo: Kristin Alberts)

At 1200 fps, Hunter Match is hot enough to run all the semi-autos we tested with plenty of oomph on target without sacrificing accuracy for souped-up speed readings.  When we slowed down rate of fire just a bit with the A22, accuracy from Hunter Match at distances of 25, 50, and 100 yards was exceptional, and without making groups on the range, all we can say is every shot grouped well.  I wouldn’t hesitate to place this ammo from a well-sighted rifle at minute-of-chipmunk-vitals at any of those ranges.

I’ve spent many hours hunting small game with rimfires since my age could be counted in single digits, and never even considered the need for a hunting match ammo.  However, as rimfire aficionados sometime tend to push the ranges and capabilities of their guns and ammo — or we just seek the best performances from calibers not reloadable — Federal’s Hunter Match enters the conversation as a viable player.  A couple Henry lever guns, a Ruger 10/22, and a Ruger SR22 also made quick meals of the ammo, and lethal results on game.  Accuracy was exceptional, both on paper and in the field, with most five shot groups easily covered by a quarter.  All that really matters, is that with the company’s special attention to consistent priming and a newly formulated powder, ignition and function, as expected, was flawless and did the job in the field. 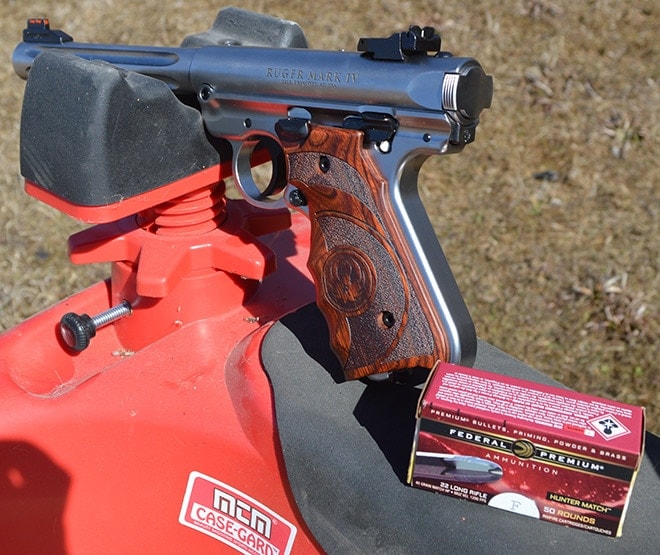 The price is right

For many decades, rimfires have been largely written off as a plinking round, a child’s first gun, or one for low budget, low-expectation pest control.  But these days, it’s certainly not uncommon to see mature adults spending $500+ on some variation of threaded, heavy barreled, thumbhole stocked, match-grade triggered rimfire rifle paired with equally qualified optic, all set to shoot prairie dogs, ground squirrels, or any number of critters. Whether you spend top dollar on your rimfire hunting rigs or you just shoot a barn gun, it’s hard to argue against shooting this ammo because Federal has priced it for the masses. 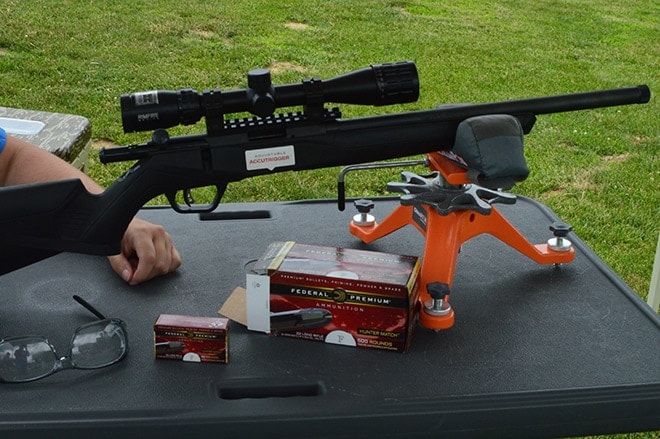 Do you need this ammo if you plan to hunt with a rimfire?  No.  Plenty of hunting has been done over many decades with the cheapest round nose rimfire ammo that could be found on the shelf.  But Federal makes Hunter Match immediately interesting as it’s priced to move.  They are essentially offering match ammo at bulk pricing.  I found boxes at a local big box store for $5.99 per 50 round box, cheaper than all other brands of match ammo which generally run $8.99 to 12.99 for the same 50 rounds.  What’s more, the Hunter Match is more capable for what the majority of rimfire buyers seek — something to take care of vermin around the farm, to knock squirrels from treetops, and rip the “X” out of targets.

We’ll be interested to see if the Hunter Match is ever released with something other than a straight lead hollow point bullet.  There may be options for micro copper, jacketed, or even ballistic tips even in the long rifle market.  Though many more options exist for hunting bullets in both 22 WMR and 17HMR rimfire calibers, Federal certainly has an option to expand match hunting ammunition in those areas as well.   If they do, we hope and expect that the quality and price point will mirror that of Hunter Match 22 Long Rifle. 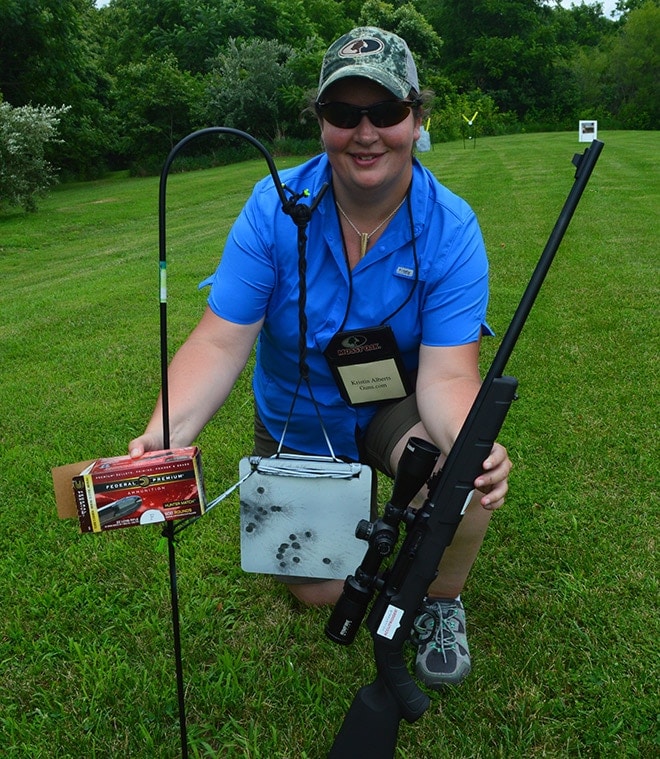 From a writer’s standpoint, it’s often difficult to pen tomes about something as simple as rimfire ammunition. But in this case, Federal Premium has taken the ordinary 22LR and made it extraordinary, giving me something I didn’t even know I needed—match grade rimfire hunting ammunition.  And for the win, Hunter Match is on the shelf at a price that can’t be beat by anything even close to the quality.  Hunter Match is a welcome addition to any rimfire hunter’s cache and makes a formidable companion to any rimfire hunting firearm on the market, from semis to bolts to levers to pistols.  With quality components and top performance partnered with a hollow point hunting bullet, proven to maintain expansion and performance beyond 100-yards, I’d say these rounds are here to stay.