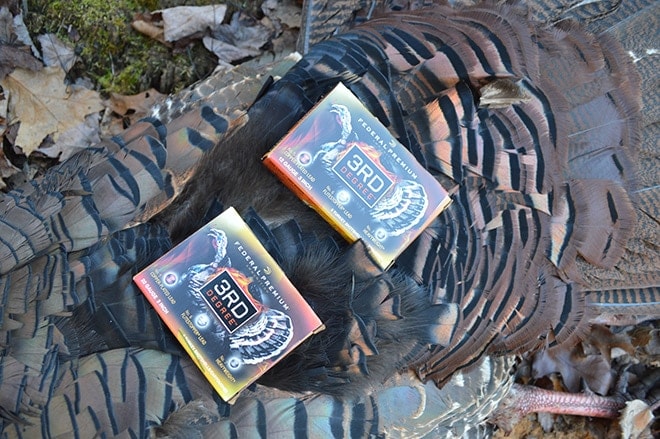 Before we go full-on into a debate regarding whether you need specialty ammo for taking toms or can use grampa’s paper shells, let’s at least take a long look at one of the major players in the market: Federal’s Third Degree Turkey.  With three layers of shot types in a game-changing wad design, is this the ammo you can’t afford to do without, or just the ammo you plain can’t afford?  Guns.com took the third degree out for late fall gobblers so you’ll be ready come spring.

What is 3rd Degree 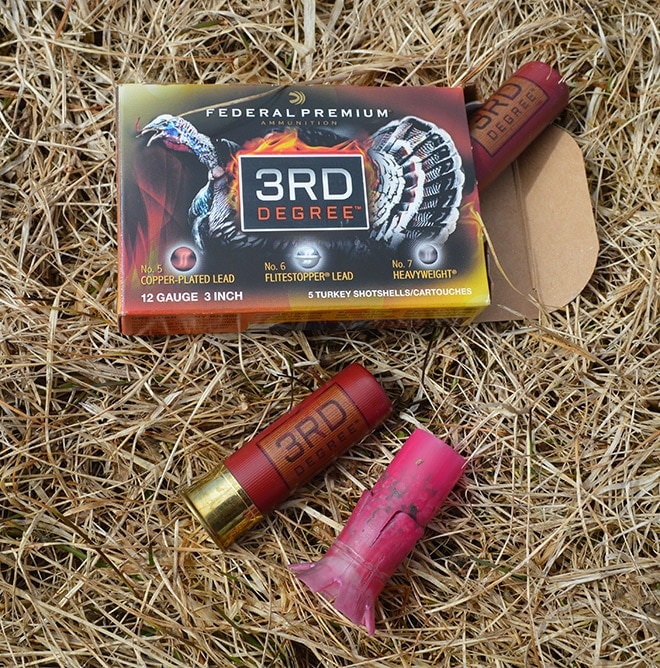 The science behind Federal Premium’s 3rd Degree turkey ammo is perhaps the most intriguing of all the specialty loads currently on the market, including competitors from Winchester and Hornady.  While others focus on achieving the tightest patterns at the longest ranges, Federal aims to dominate at all distances by packing three shot sizes and spread-patterns in one innovative package.

Each shell contains, essentially and per the name, three degrees or layers of shot and capability.  Forty percent of the shot is #7 Heavyweight and sits at the bottom of the wad for the maximum long-distance range.  The middle 40% of the shell contains premium #5 lead and presents what the company calls “dense, deadly patterns” at the midranges of the hunt.  Finally, the top 20% of the 2rd Degree round is Flitestopper #6 shot that is designed to “spread quickly to create a forgiving close-range pattern.”

Federal Premium Third Degree Turkey 12 gauge shotshells use three layers of pellets and science to be effective at ranges from close to far.

If that’s not enough innovation, Federal’s FliteControl wad opens differently than standard wads, with this one coming open from the rear.  It is intended to stay with the shot longer than standard wads. One of the most interesting aspects of the 3rd Degree load is that is designed to have enough “forgiveness” in a pattern to take a tom that snuck up on you at 10 yards, or the wily old bird that is hung up at 50+ yards.

Other turkey loads, especially run through an extra full choke, will have an incredibly tight and small pattern at only 10-15 yards.  For that same round to also be deadly at greater distance is quite remarkable.  While Winchester also claims lethal patterns at up to 60 yards, Federal Premium says that “at 50 yards, 3rd Degree puts 69 percent more pellets in a 10-inch circle than standard lead turkey loads.”  The 3rd Degree loads are available in both 12 gauge 3” and 3.5” and new twenty gauge 3” shells.  Innovation comes with a steep price, however, with five-round boxes wearing an MSRP of $21.95-$24.95. Real world prices are currently holding at $17.99-$20.99. 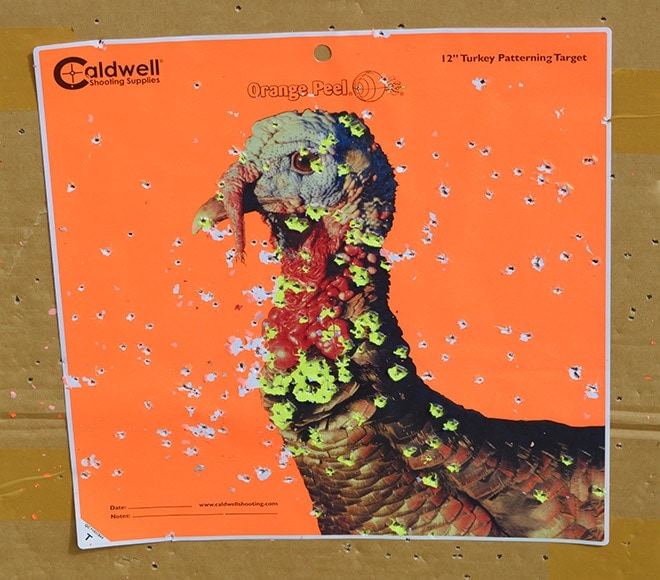 While I’m the first to acknowledge the difficulty in forking over $20+ dollars for a handful of rounds of ammunition, when you only have the chance to harvest one or two toms a year, maximizing success makes price more minor.  I’ve taken plenty of birds before 3rd Degree and I’m sure I’ll take plenty without it in the future, but for this season, I had the chance to shoot one of the best.  Why do I say that? Because the round performs better at all ranges than any other shotgun round I’ve fired.  Patterning boards and birds tell the tale.  With most any other round, hunters must be well in tune with the ammo, the corresponding choke, and the patterns at their anticipated ranges. 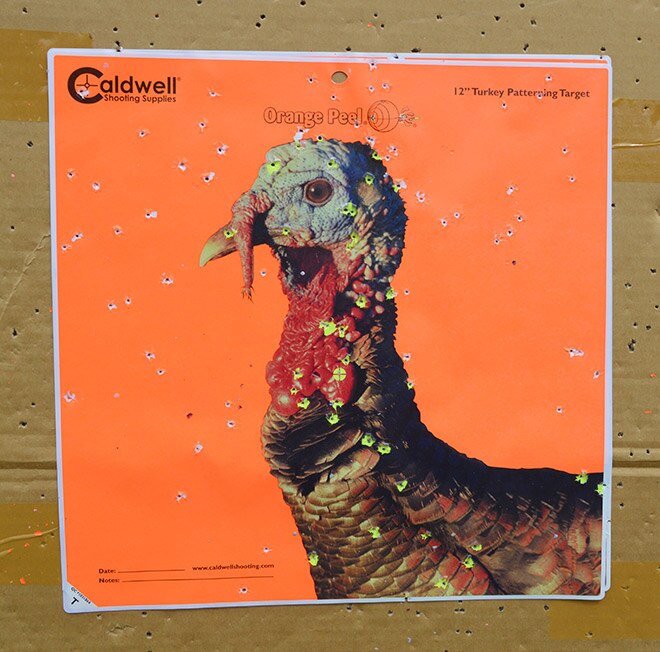 With the 3rd Degree, however, the science affects the spreading of the three types of shot.  We took our new Winchester SX4 shotgun to the patterning board with 12 gauge 3” shells and fired from both 25 and 55 yards.  Though the pattern was much more dense at 25, the 55-yard turkey target was equally as dead.  Just to keep things interesting, we also fired from 10 yards, with a very well destroyed target.  And to stretch things out, we benched the gun at 65, and while there were a few pellets in the spinal kill zone, we can’t in good faith recommend reaching out quite that far.  But 10-55 yards is fair game with the 3rd Degree through our test gun and choke.  Of course, every gun and choke is different, so the onus is on the hunter to know their own pattern and capability before heading afield. 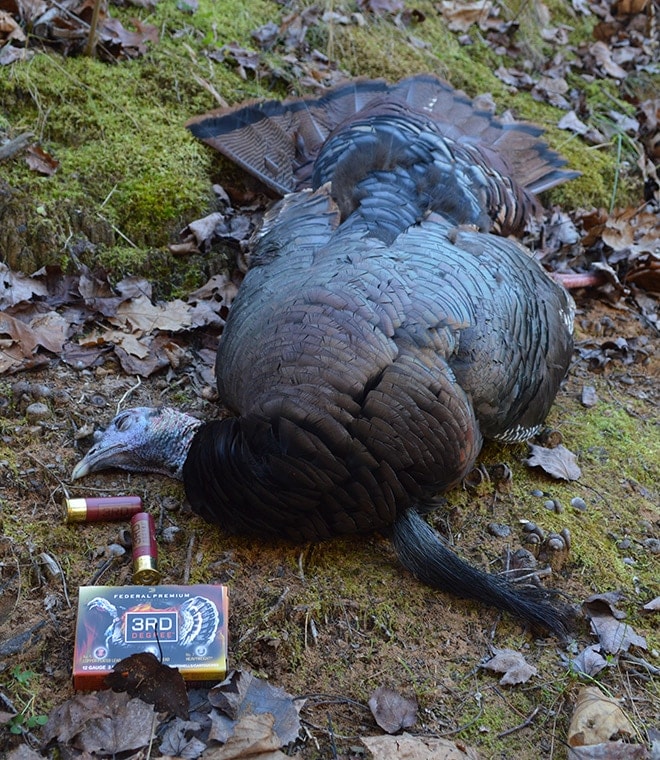 One of many successes in the field with Federal’s 3rd Degree. (Photo: Kristin Alberts)

Recoil is no more or less than any other similarly sized shell.  While I’d rather put in the agony, calling, and camouflaging to pull a bird inside 25 yards, sometimes that gobbler of a lifetime hangs up at 50 and it’s nice to be prepared.  Or the bird has a sense of humor and sticks its head in under 10 yards away.  Will you know how your chosen ammo performs?  Federal 3rd Degree has you covered.

The long and short of the story is simple.  Regardless of your chosen ammo, shooting specialty ammo is no excuse to slack in the preparedness department.  You still must put in the time, pattern, and be prepared to know your clean kill ranges.  No, you don’t need specialty turkey loads and yes, the price has sticker shock.  But Federal is leading the way with the science behind these babies and making the most successful specialty gobbler medicine on the market today.  If you can afford to give them a try, you might just be pleasantly surprised at both the performance and the corresponding fan and beard on the cabin wall.