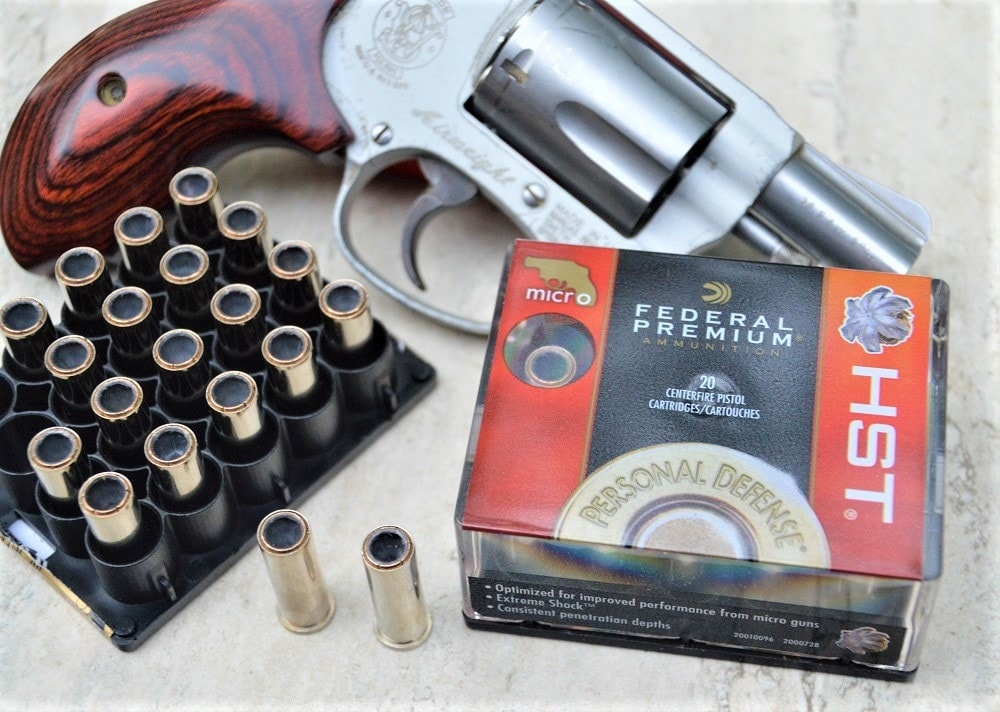 The new HST Micro .38 load is billed as being optimized for the most efficiency and accuracy in subcompact handguns. (Photos: Chris Eger/Guns.com)

Resembling traditional wadcutter ammo, the jacked hollow-point HST Micro is no plinker and uses deep-seated bullets to eliminate air inside the case, producing more consistent powder burn rates. They use a nickel-plated brass case with waterproofing on the case mouth and primer, with a tapered jacket profile. Federal uses a cannelure groove that locks the copper jacket to the lead core, a six-petal design that mushrooms out as it travels down a wound channel. 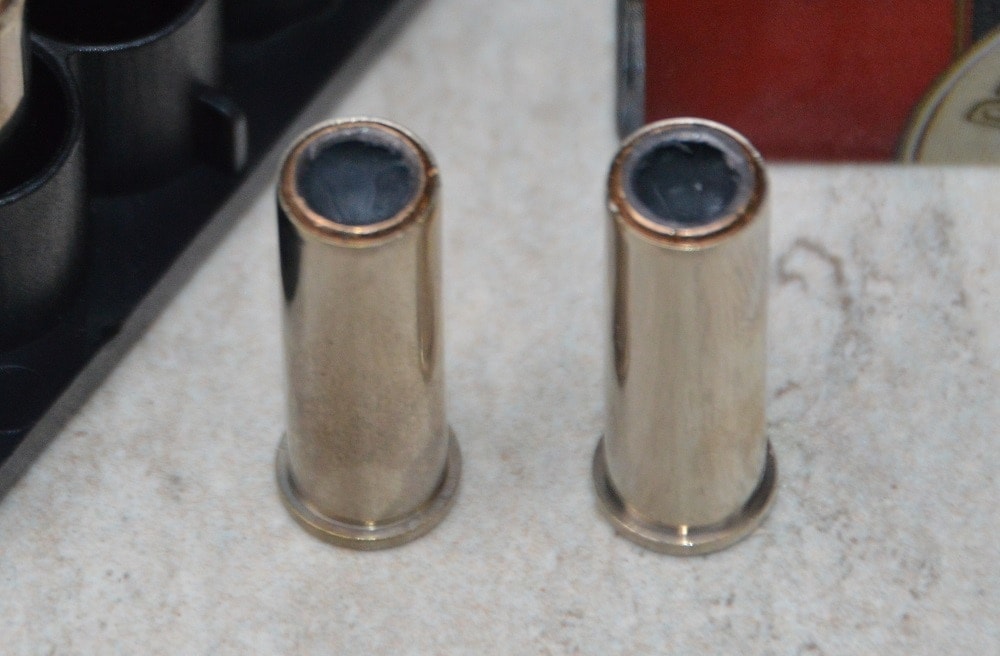 The HST uses a nickel-plated brass case with waterproofing on the case mouth and primer, with a tapered jacket profile

While the HST bullet line dates to 2002 and has long been popular in law enforcement use, the HST Micro series is much newer, with a 99-grain .380 ACP and 150-grain 9mm load recently introduced, and now augmented by the .38.

The loading is optimized for performance from “micro guns” i.e. snub-nosed revolvers, which have never really gone out of style. As it is a +P load, older revolvers should be off-limits for the new Federal ammo, but modern guns rated for that pressure now have a premium new offering on the block to stoke their favorite wheel gun with.

The company sent Guns.com 80 rounds to test — four, 20-cartridge boxes — and the good news is that they all went off as planned. Our test gun was a well-used Smith & Wesson Model 642-1 Airweight .38 five-shot J-Frame revolver. With a downright humble 1.875-inch barrel, it is rated for continuous +P use and was the shortest barreled snub we could lay hands on. 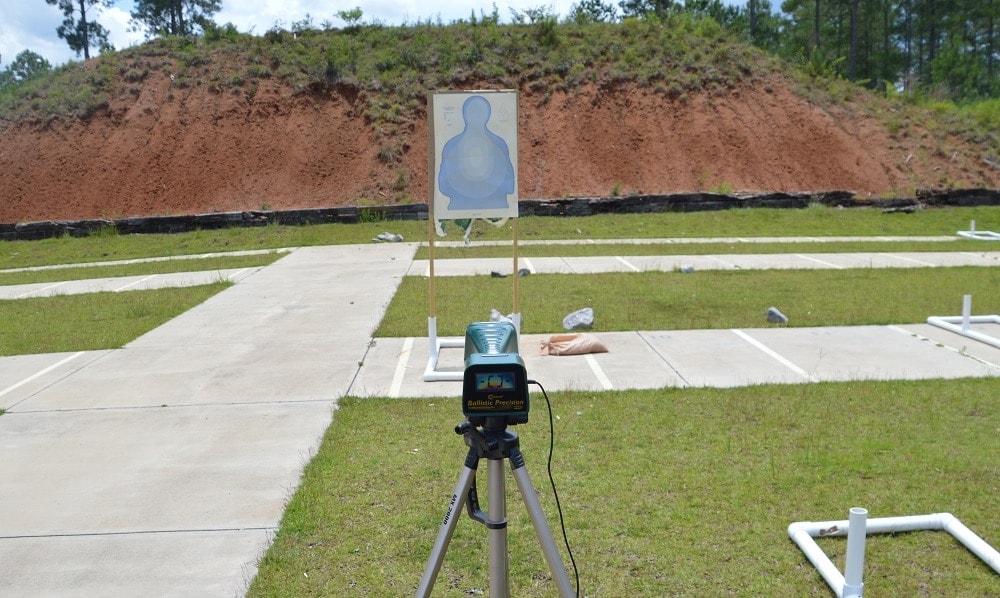 This was at 168 feet elevation, 94 F temperature, 72 percent humidity and with a 2 mph wind. When you consult the data compiled by the good people at BBTI, this is, in general, a good bit higher velocity than most other loads out there in the same length barrel profile. As this was also significantly higher than Federal’s published data of 890 fps on the loading, we will revisit this velo test down the road to make sure there was no equipment error in the chrono.

In testing practical shooting with the load, we used a U.S. Treasury LTR-II target and rapid-fired 15 rounds at 7, 15 and 25 yards using a two-handed grip that resulted in 13 out of 15 “in the blue” on the transition target, with the two lost rounds coming in at the 25-yard mark.

Groupings at the 7 and 15 were sufficient to be contained in the target’s center mass. 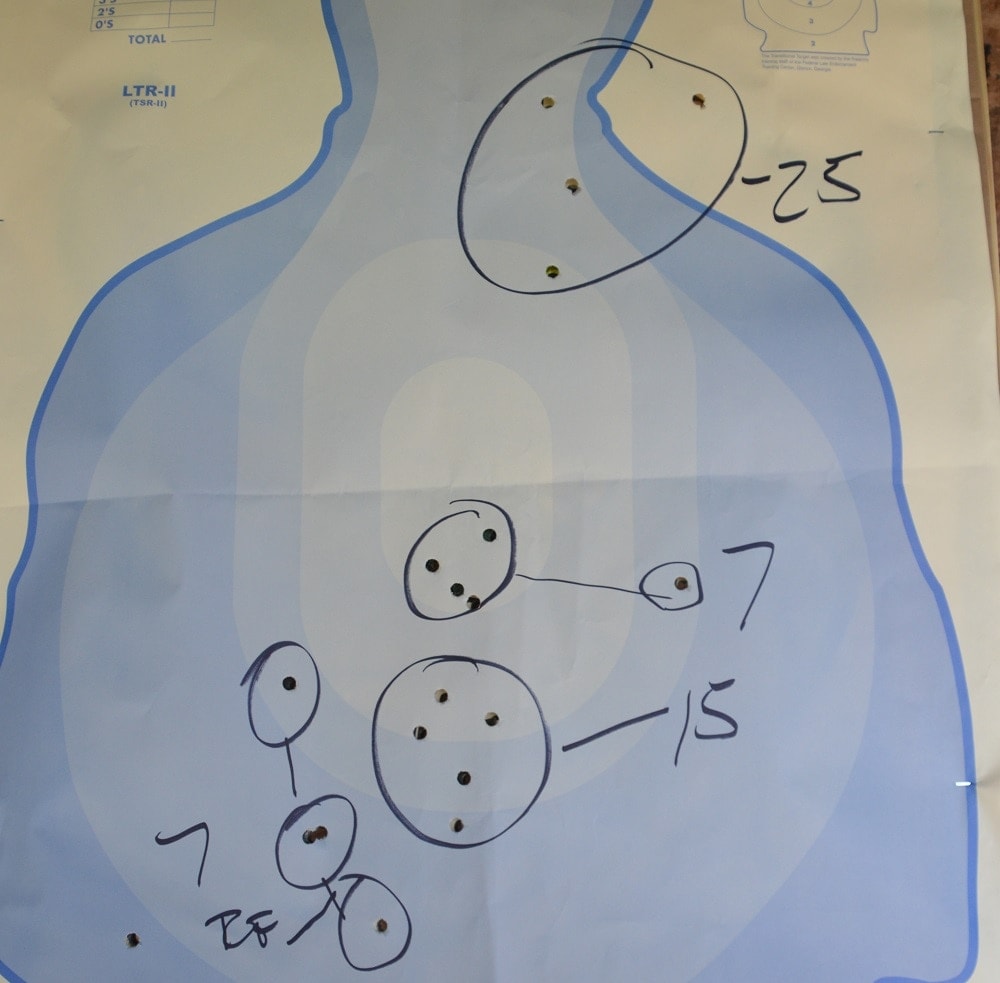 Groupings at the 7 and 15 were sufficient to be contained in the target’s center mass.

The loading is snappy, but even shooting off-hand-only at the 7, we could get back on target after each round and make contact with 5/5 shots. When using a J-frame revolver with fixed sights and a 4-inch radius from muzzle to grip, that isn’t too bad.

In ballistics tests, Clear Ballistics supplied us with a synthetic 10 percent FBI block which we duly riddled. Of the five shots fired through the 16-inch long block, two penetrated the entire length and exited into the berm.

The three bullets retained inside the gel showed controlled expansion between 11.5-15 inches, mushrooming into a six-petaled blossom of distinct lead and copper layers. 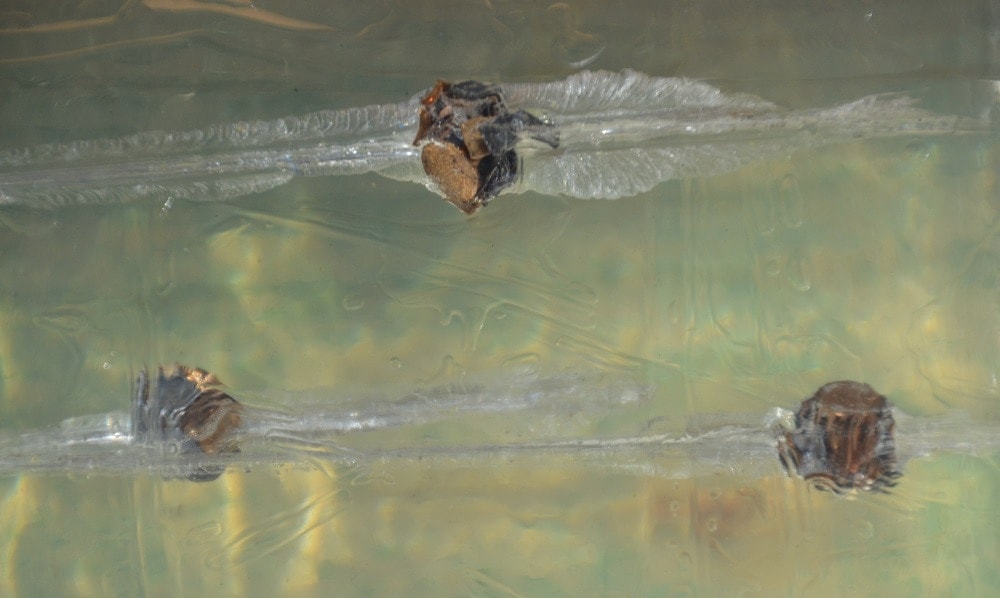 Federal uses a cannelure groove that locks the copper jacket to the lead core, a six-petal design that mushrooms out as it travels down a wound channel 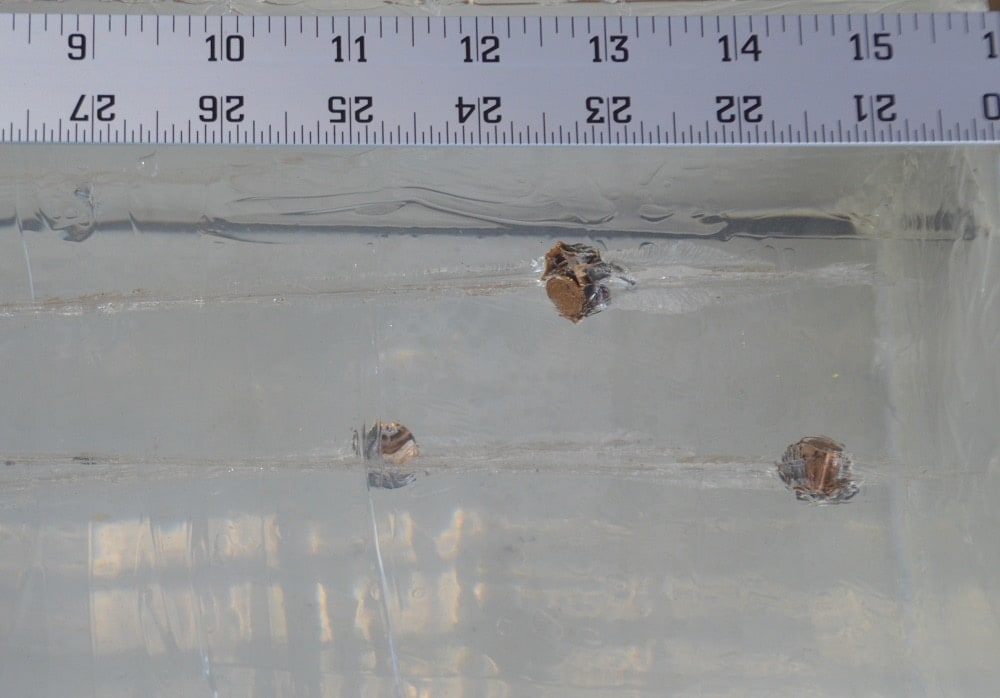 Penetration was excellent with the shortest-traveled round settling at 11.5-inches, though it actually traveled two inches deeper than that before being pulled back into the channel

For comparison, the spent rounds recovered had a diameter between that of a dime and a nickel, though in each case shed a lead petal or two on their travel through the gel. None of the copper petals left the bullet. 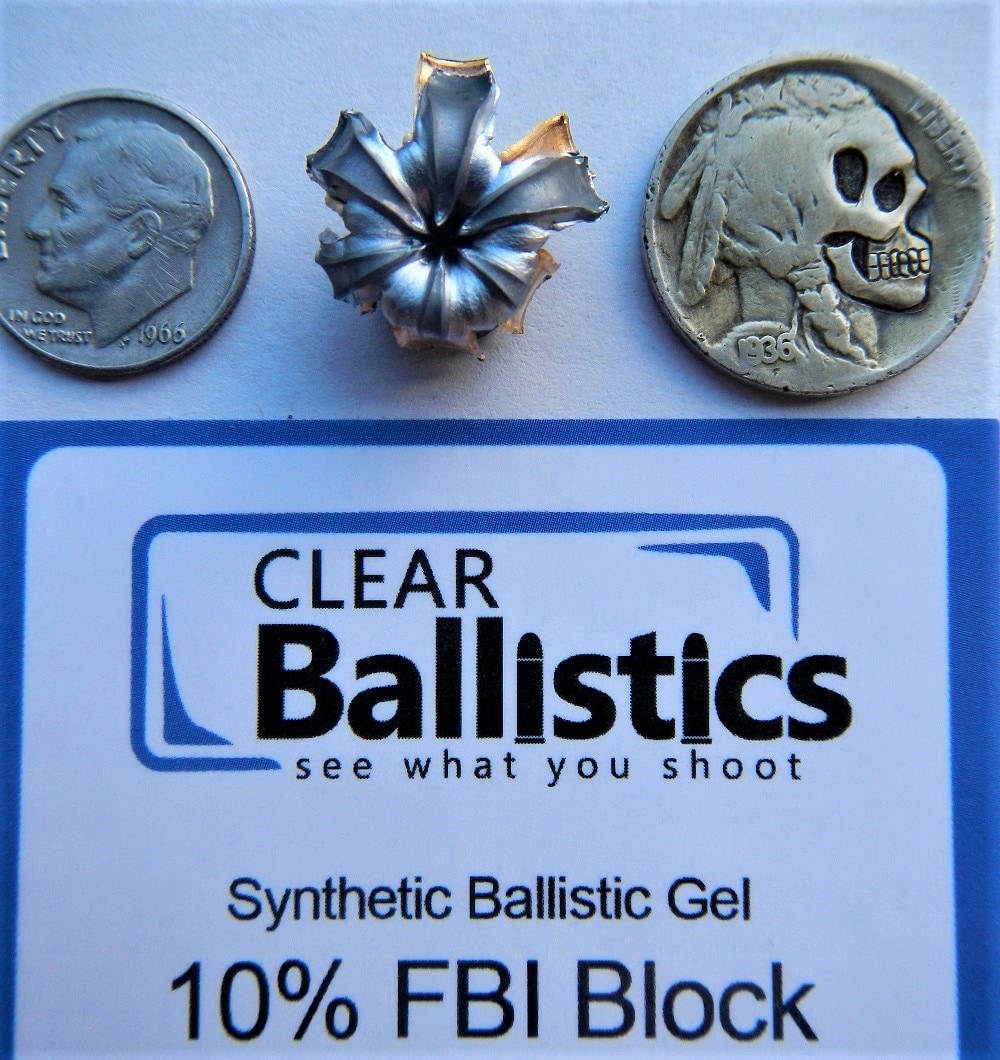 Practical handling of the rounds showed one further observation– the fact that the shorter profile leaves less cartridge to insert into the cylinder on a reload. Nonetheless, we could use both speed loaders and speed strips effectively with the SWC-length HST loading. 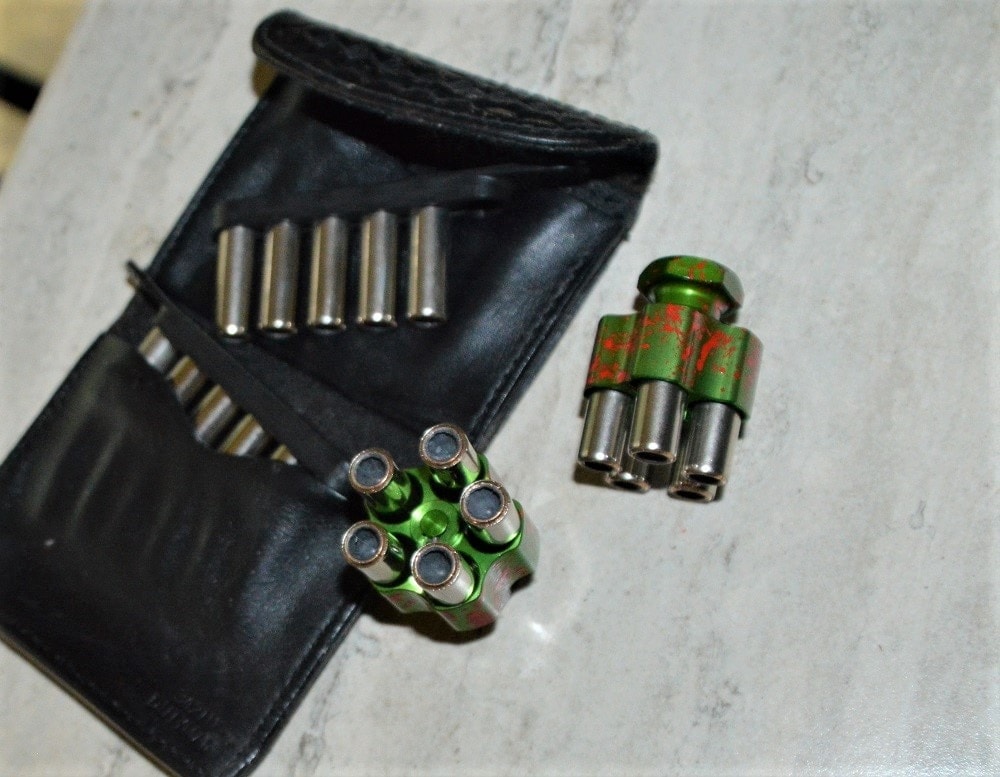 MSRP is $30.95 for a 20-round box, though we found the load– P38HST1S– listed with online retailers for significantly less.