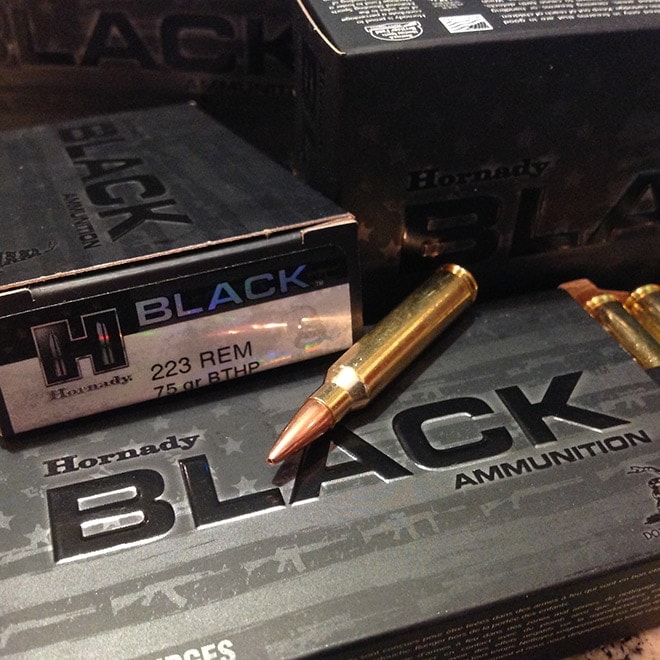 The 223 BTHP shot well from both an AR platform and bolt gun, and the bullet should perform well on small game and varmints alike. (Photo: Kristin Alberts)

Whether you call them black guns, AR-style, or modern sporting rifles, these semi-auto rifles perform best when cleaned, maintained, and fed a certain diet of ammunition. While reliability is one major factor in selecting ammunition, Hornady BLACK brings the potential for greater accuracy for longer range shooters and hunters.  Is the ammo worth the price increase over all the other surplus-budget rounds on the shelf?  Guns.com finds out.

New for 2017, Hornady’s BLACK ammunition features a wide variety of versatile loads optimized for what they call “America’s favorite guns.” Regardless of the caliber, each box of BLACK is loaded with variations of premium Hornady bullets, each tailored to a specific platform, like AR’s, AK’s, pistols, rifles, or even tactical shotguns.  Though the rounds seem naturally inclined to excel with fit, feed, and function in semi-autos of direct impingement, gas piston, or inertia drive, it’s important to note that BLACK is equally as friendly with bolt or pump guns, suppressed, sub-, or supersonic jobs. 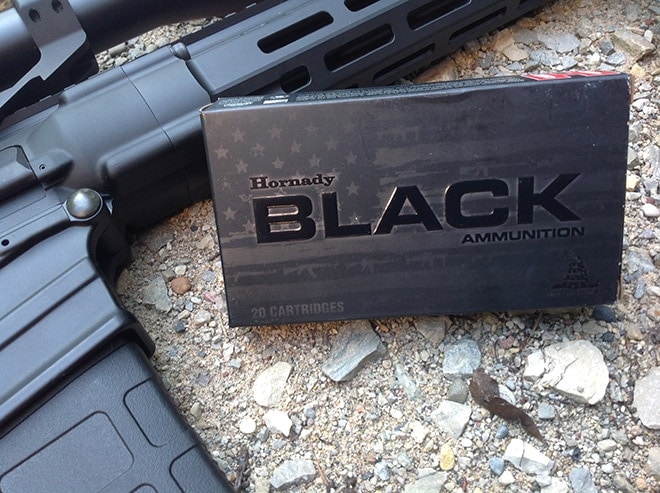 The BLACK 308 is a perfect companion for an AR-10 platform, excelling in the Savage MSR Hunter. (Photo: Kristin Alberts)

As with other Hornady products, BLACK is made in the USA and available in multiple bullet types, including A-Max, V-Max, FTX, and Match.  All loads are touted by the company to use a cleaner burning powder (though that secret is of course proprietary).  BLACK is instantly recognizable on the store shelf, as it ships in stark black matte boxes of 20 with glossy lettering and silver reflective labeling, save the 12-gauge which comes in boxes of 10.

I’m not going to lie — the packaging is attractive.  But it’s about the contents.

While one certainly expects the obvious calibers — .223, 5.56, and .308 — in any ammunition touting itself for black guns, Hornady went whole-hog for the initial release, showing a total of 14 caliber and bullet-weight combinations: 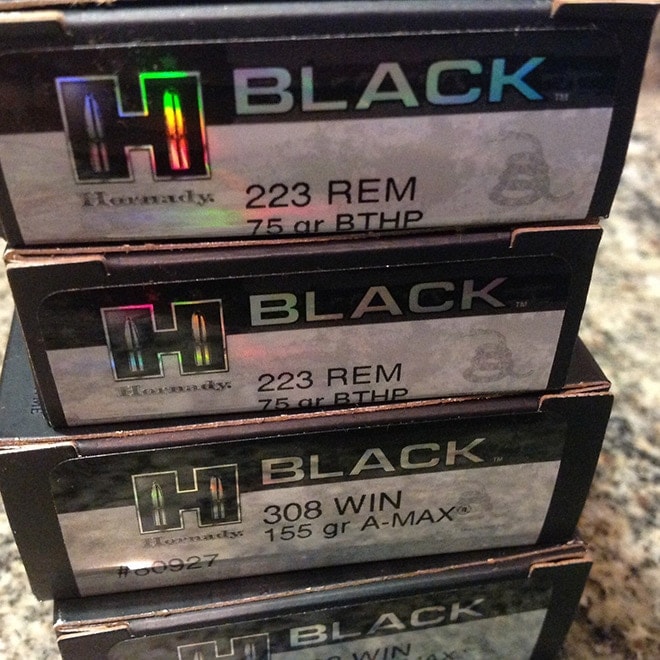 Because BLACK is marketed as a higher end product with performance bullets, it’s interesting to see calibers like the 5.45×39 and 7.62×39 included.  Guns once used primarily for volume shooting with “good enough” accuracy at practical ranges can now be truly shot with accuracy and tighter groups in mind.

Shooters of the .300 Blackout will be pleased to see both standard and subsonic versions available, loaded with A-Max and V-Max bullets, ideal for both target and hunting use.  The 6.5 Grendel is the sole BLACK loaded with ELD-Match bullets and, while we’d like to see greater use of this premium long-range tip, Grendel owners should gravitate to this offering unless they already reload the same. 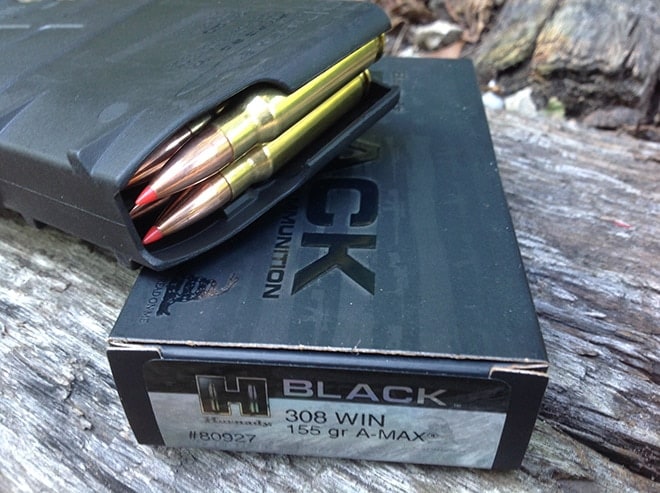 Regardless of caliber, a quick look at the entire BLACK catalog of products shows premium bullets in weights intended for serious — and accurate — purposes. The only ones that do not pique particular interest are the 5.56 FMJ and 12-gauge Buck, neither of which shout “premium offering” on paper as do the rest.  Of interest, several of the new choices were available in either identical or very similar versions under the Hornady Custom label, though it’s nice to see the BLACK now tagged at slightly lower prices.  The majority of the bullets — A-Max, V-Max, FTX, and BTHP — are all capable hunting bullets as well, making the line a boon for the growing segment of black-rifle hunters of quarry from coyotes to deer and feral hogs. 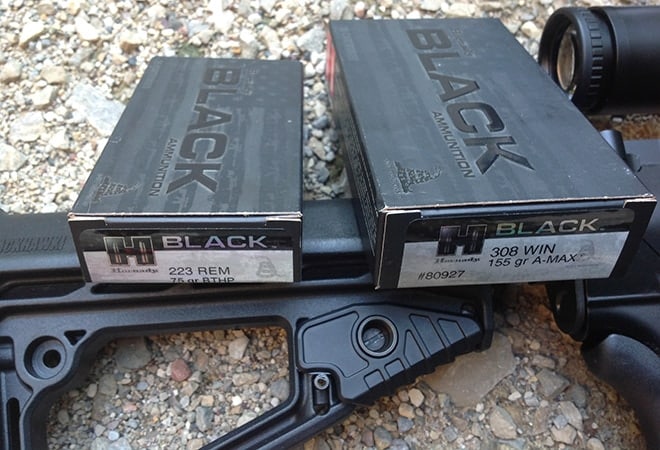 We tried out two calibers of BLACK, the .223 and .308, though there are many other options. (Photo: Kristin Alberts)

Regardless of the furniture color of the gun, Hornady BLACK performed for use on the range.  We fired the BLACK in .223 75 grain BTHP from both a Rock River sporting rifle and a Ruger 77 bolt gun and found the ammunition very capable in both. Accuracy was better than any other bulk factory rounds we had on the shelf, which are no doubt geared more toward reliability than accuracy.   In fact, it was a quite comparable to some preferred handloads. Additionally, the Hornady BTHP makes a formidable hunting bullet for small-mid sized game. While most black rifles and a majority of bolt guns will stabilize the heavier 75 grain bullets, be sure your rifling is suited to the task. 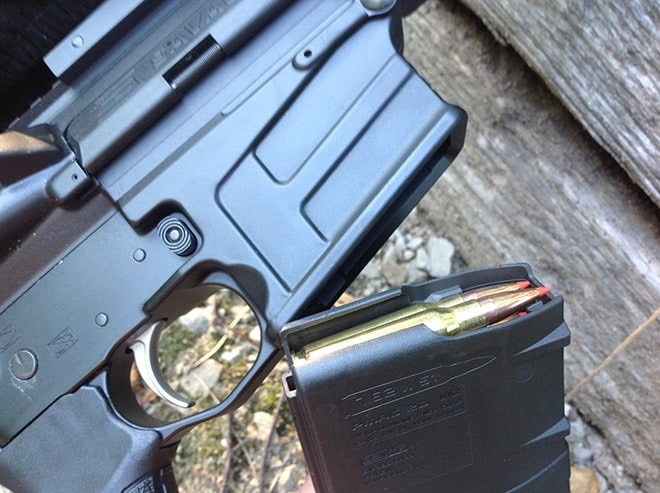 A mag loaded with .308 A-Max BLACK ready for the MSR. Great for punching targets, but even better for hunting. (Photo: Kristin Alberts)

While the small rifle ammunition performed well, Hornady BLACK really excelled when firing the .308 155 grain A-Max through both Savage’s new MSR Hunter and a Ruger Precision bolt action.  At 100 yards, five-shot groups of BLACK A-Max holes were nearly touching, and groups held tight out to the 300-yard mark where we concluded testing.  The .308 A-Max would be very capable varmint and medium-game medicine. There is no reason to limit BLACK ammo to semi-autos either, as it ran cleanly and with the expected accuracy given a premium bullet in a Hornady factory round.  (Though it goes without saying, function and reliability was perfect throughout the guns and options tested. )

Though there’s no good way to quantify the amount of dirt left behind by a particular ammo — it is simple enough to see that some are dirtier than others, especially in AR-platforms.  To that end, there was no unburned powder, excess fouling, or the like when firing box after box of Hornady BLACK.  What the line essentially offers is immediately recognizable, black rifle friendly packaging on store shelves with bullet weights and types not available in most factory of the same calibers.  What’s more, we anticipate additions to the lineup as time progresses, with even more calibers and bullet options. 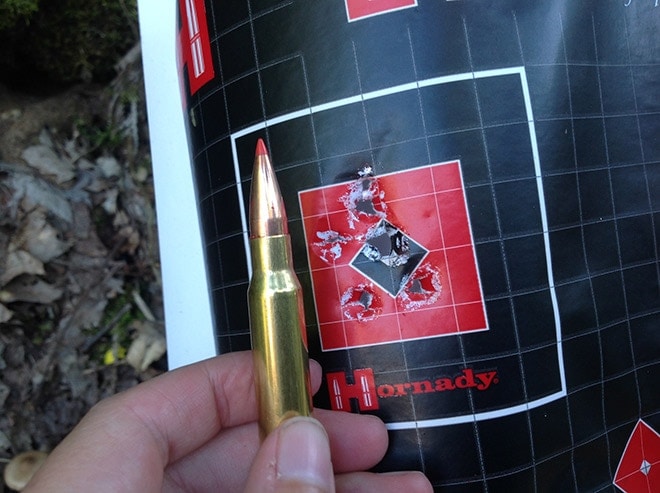 Though Hornady BLACK is too spendy of ammunition for mag dumps and bulk blasting away with ARs, today’s modern MSR shooters have come to both appreciate and expect accuracy and that’s where BLACK excels on the market.  Whether you target shoot, appreciate long-range groups, run competitions, or even hunt, BLACK has the bases covered for the majority of typically black gun configurations.  With its premium bullets like A-Max, V-Max, and ELD-Match in weights geared toward accuracy potential, there’s little doubt it will appeal to shooters of all platforms.  If you seek more than the previously-accepted reliable feeding and minute-of-pie-plate accuracy, hit the bench with some BLACK and show us your groups.