Another convert for the Kel-Tec Sub-2000 (VIDEO)

My mistrust of the Kel-Tec Sub 2000 goes back a ways, and it has absolutely nothing to do with Kel-Tec.  My first gun was an early PF9.  I regularly carry a P3AT.  I’m smitten with the KSG.  I’ve reviewed almost everything they’ve made over the years, but I’d avoided the Sub-2000.  The rifle didn’t look like something I’d like.

I’d seen them around.  I’d actually fiddled with two or three in various gun stores.  The folding stock made me nervous.  The release, which is also the trigger guard, allows the rifle to fold right at the breech.  What would happen if you were pumped up on adrenaline and bumped the guard?  Would the pressure from your shooting hand buckle the gun?  What if there was a round in the chamber?  And the whole gun only weighs 4 pounds?  Where is the rest of the rifle? 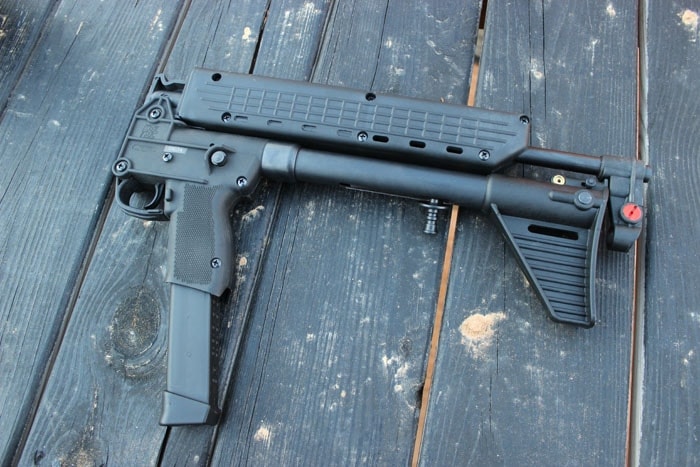 Yeah.  I was wrong.  A friend picked one up recently and asked if I wanted to shoot it.  Of course, I said.  I didn’t want to make him feel bad.  He’d spent good money on the thing.  Not a lot, but some.

Let’s go back a bit.  Almost all of the things that turned me off about the Sub 2000 are what makes it special.  The gun itself is small.  Folded, it comes in at 16 inches.  The barrel measures 16.1 inches, so it is as short as it can be without needing paperwork.  When the stock is extended, the rifle is 29.5 inches. 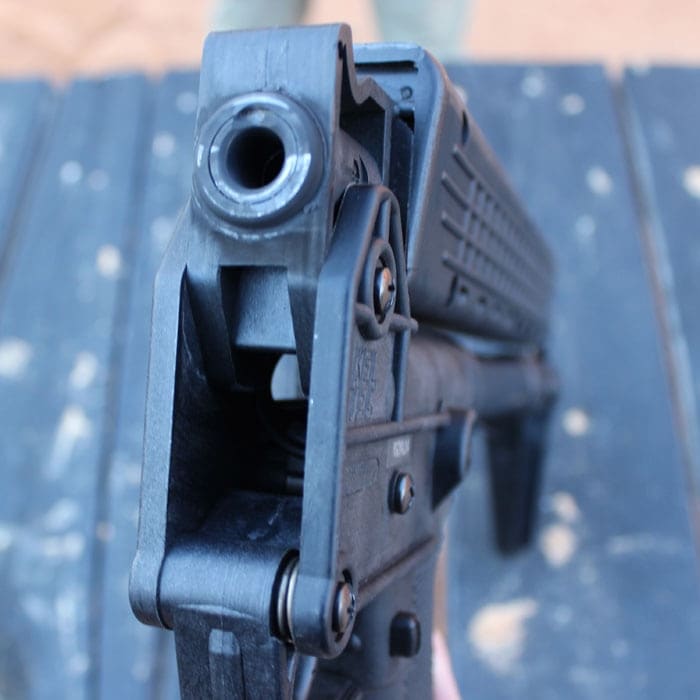 When folded, the barrel is open. (Photo by David Higginbotham)

The stock is a simple tube that allows for the movement of the bolt.  It doesn’t really allow for any substantial length of pull, which means your face is right up on the gun.  If you are big, like me, it feels small.  But it is supposed to.

Magazines (of the Glock persuasion) fit into the grip, just like on a pistol.  The mag release is functional.  The safety is a simple cross bolt design.  Nothing about the mechanics feels overly sophisticated.  Even the trigger is basic.  Functional, but very basic.

The fore-end of the base model is polymer and simply there for extra grip.  A quad rail is available and I think it would be a mandatory addition.  In the stock configuration, there is enough length for a solid hand hold, and the stock locks the gun in place.  With the low recoil of the 9mm, the Sub 2000 has very little muzzle rise. 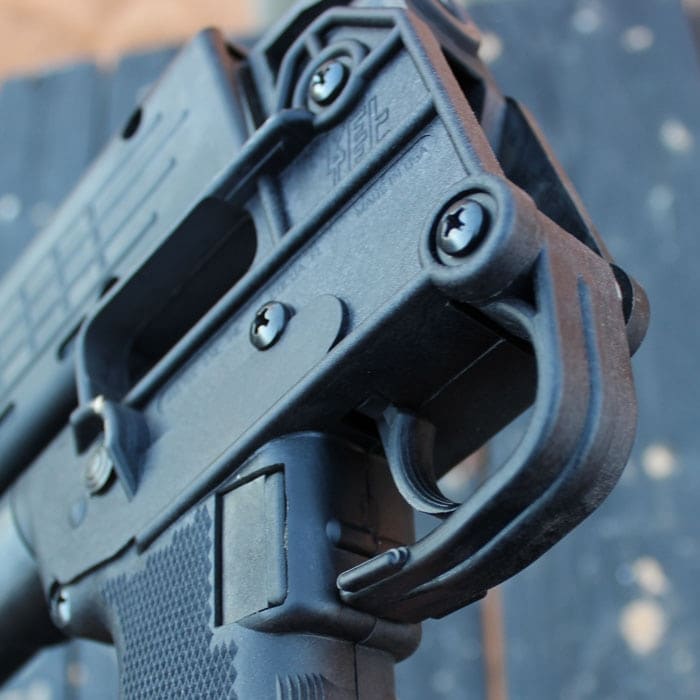 The trigger guard is the lever that folds the gun. (Photo by David Higginbotham)

The big selling point is the Sub 2000’s ability to fold up.  It is easy to fold and unfold.  The trigger guard allows it to hinge in the middle.  When it is folded, a simple button under the front sight post releases the secured barrel end.  The only real issue with folding occurs when the you try to fold the gun with a round in the chamber.  As the bolt is going one way, and the barrel the other, the round has to work free of the extractor and go somewhere.  Not a good idea.

This gun shoots like a champ.  This is what changed my mind, honestly.  Fans of pistol caliber carbines already understand what I’m saying, but I think there’s more to the appeal of the Sub 2000.  This thing is very light.  With a 30-round magazine, a sling, a light and a red dot, it would still come in under 7 pounds. 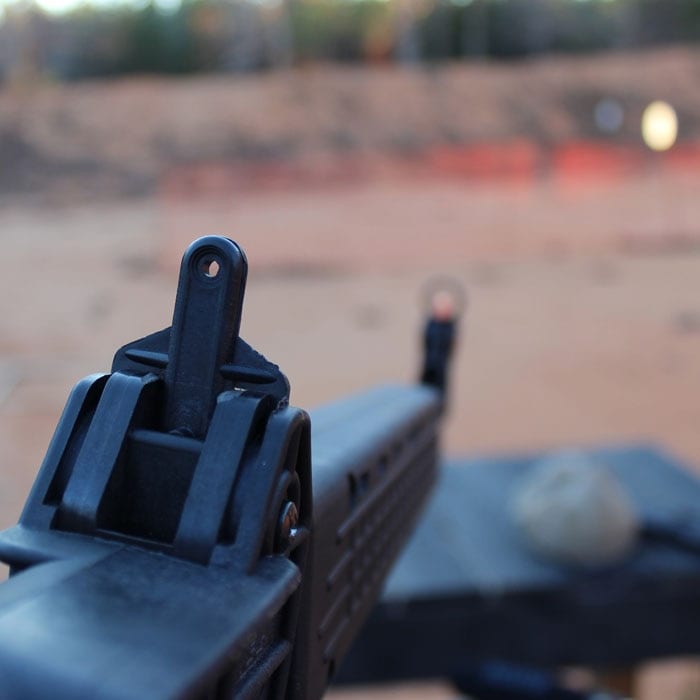 The peep sight folds with the barrel. (Photo by David Higginbotham)

The red dot would help.  The sights on the Sub 2000 are interesting.  They’re very visible.  The rear peep sight folds up with the rifle and unfolds when the gun is opened up.  The sight system is designed for fast, accurate enough shooting.  This is not a target gun.  It is fast and a little bit loose.

And that’s exactly how it should be.  If I were clearing a building with any kind of open distances, this would be my choice.  For the confined spaces of a house, I think I still prefer a shotgun, but this platform has clear appeal.  The short length makes the Sub 2000 incredibly maneuverable.  The increased capacity available in larger magazines has logical appeal.  The stability offered by the length and the stock make the Sub 2000 shoot like a rifle.

We ran the gun out to 100 yards with predictable results.  In the video above, where we’re shooting in the rain, we were knocking down bowling pins at 100 yards with little difficulty.  It took a few shots to get dialed in at that distance, but the longer barrel delivered much more consistent results than a pistol.

When extended, the whole rifle is only 29.5 inches. (Photo by David Higginbotham)

At close range, shooting steel, the Sub 2000 flies.  It is so easy that we kept trying faster and faster splits.  The recoil will pull you off target, but it is so easy to correct.  With a red dot, the advantage would almost be unfair.

I’m sold on this thing.  I can’t believe it took me this long to see the light.  I’m not alone.  I’ve never met anyone who has shot the Sub 2000 that had anything negative to say about it.  Maybe that’s misleading.  There are some things I’d want to change, but not at its current price point.  Retail on these rifles comes in around $400.  That has its own appeal.

I’ll have one soon enough, and it isn’t going to get babied, I assure you.