Since the Bureau of Alcohol, Tobacco, Firearms and Explosives gave the okay for shouldering a pistol brace, shooters have been buying AR and AK pistols in droves. Which is strange because rifle-caliber handguns are substantially less accurate, more difficult to aim and have egregious muzzle blasts compared to their full-sized counterparts. But, if these weapons are truly inferior in every way except size, why are people buying them?

More than two reasons for a rifle-caliber pistol

The practical reason deals with the compact nature of an AK or AR pistol. These snub-nosed, flame-throwing lead-slingers can easily navigate through a shooter’s house to rescue loved ones even in the smallest of mobile homes.

The much less practical reason is precisely because they’re so pointless! That sounds insane when taken out of context, but many shooters enjoy the loud, explosive experience of firing 7.62x39mm or 5.56mm ammo through an ultra-short barrel. Truthfully, shooting an AKM with an 8-inch barrel feels like holding on to a pocket Fourth of July fireworks display. It is awesome in the most literal sense. 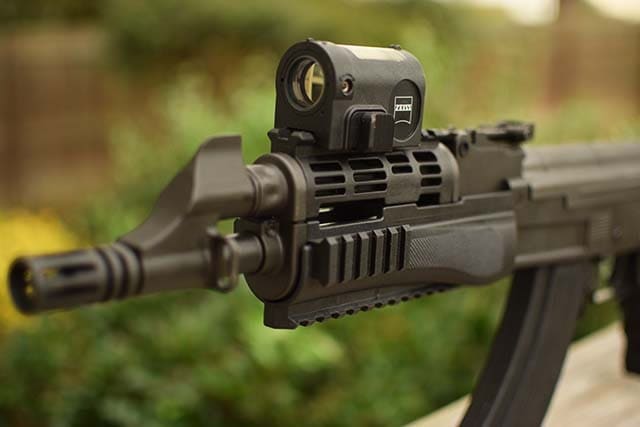 Rifle-caliber pistols have a much shorter sight radius than their full-sized brethren. A red-dot sight helps alleviate this. (Photo: Jim Grant)

However, these aren’t the only reasons a shooter would consider a rifle-caliber, brace-equipped pistol.

Another valid point includes the magazine interchangeability between rifle and pistol. Say for instance a shooter owns an older WASR AKM rifle chambered in 7.62x39mm and wants to get a compact bugout weapon for their spouse. They could buy a traditional pistol to shove into a bugout bag and it would be cheaper, but what about overall cost?

If a shooter factors in the price of ammo, two additional magazines and a holster, the difference starts to level out. Add to it the fact that handguns, for many, are difficult to fire accurately, are less effective against targets and hold less ammo. Soon it becomes apparent why militaries prefer short carbines to both SMGs and handguns.

Also, most modern handgun magazines are fairly expensive, ranging anywhere from $29 to $49. If a shooter chooses a rifle-caliber pistol based on either an AKM or AR-15 design, magazines are plentiful and relatively inexpensive (often as little as $12), and tend to hold double the rounds. Lastly, mags can be used interchangeably between a rifles and pistols of the same make.

These extraordinarily powerful handguns aren’t without their drawbacks though. Most are excessively heavy, especially if based on the AK platform, but that argument is fairly easily negated with a single point sling.

In another light, when stashed in a bugout bag, an AK pistol will make long hikes feel even longer. The rifle rounds these weapons use were designed to work best in longer barrels, and consequently when a round is fired from a shorter barrel, it doesn’t burn all of its powder. That means the remaining powder often ignites outside the barrel, resulting in a tremendous muzzle blast. While entertaining, it could temporarily blind a shooter and cause hearing damage. 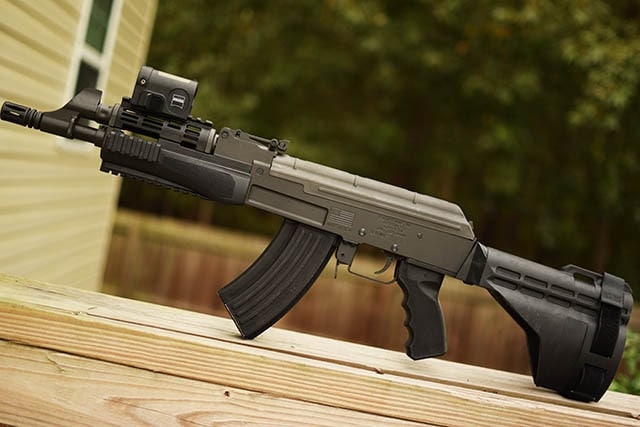 Another downside of using a full-powered cartridge in a shorter barrel is increased recoil. While not uncontrollable, recoil on a AK or AR pistol is generally more substantial than that of a 9mm or .45 ACP handgun when fired like a pistol. Utilizing a stabilizer brace lowers the felt recoil to just above a normal-sized AR or AK, by increasing the points of contact between shooter and weapon. But that leads into another possible issue.

The legality of altering pistols: Opening a can of worms?

When I first reviewed the SB-47 AK pistol stabilizing brace back in 2013, the ATF hadn’t yet ruled on the legality of shouldering a pistol equipped with said brace. At first, the general consensus among gun writers was that it probably wasn’t legal, but the ATF ruled otherwise, saying shouldering a pistol brace is okay. The agency based its ruling on the item’s physical design characteristics rather than how someone could possibly use it.

While its reasoning is 100 percent spot on, the ATF has been known to change a ruling based on sometimes inconsequential details. Does this mean it’s simply a matter of time before the ATF reverses its findings? No. It just means it’s possible that a new gun or feature may come along and then the item would by default fit the legal definition of a regulated item.

Something else to keep in mind with these weapons is that even though they look and feel like a rifle, they legally aren’t. Modifying a rifle-caliber pistol can bring one into dangerous waters. For example, attaching a foregrip or a de facto buttstock would constitute building a short-barreled rifle, which requires registration with the ATF and cutting through a helluva lot of red tape. 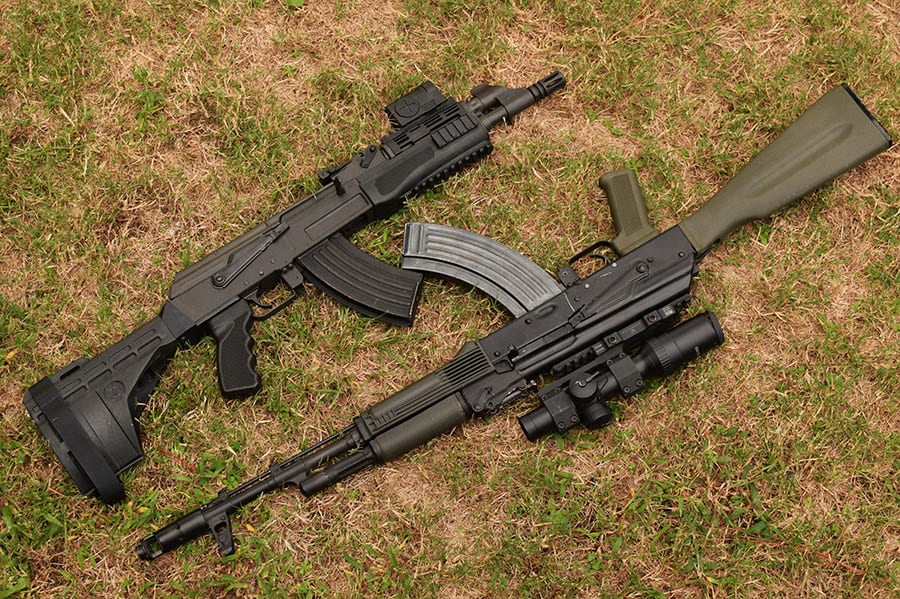 A pair of aces. These two weapons share magazines and ammunition, greatly simplifying the logistics involved in keeping them fed. (Photo: Jim Grant)

Are rifle-caliber pistols the ultimate backup?

Other than those few minor hiccups, rifle caliber pistols are awesome little survival or backup guns when paired with both a stabilizing brace and rifle of the same make and caliber. The simplified logistics of interchangeable magazines and ammunition coupled with the compact firepower of an AK that fits in a tennis racket bag makes for a seriously powerful weapon — just be sure to wear ear muffs if you value your hearing.