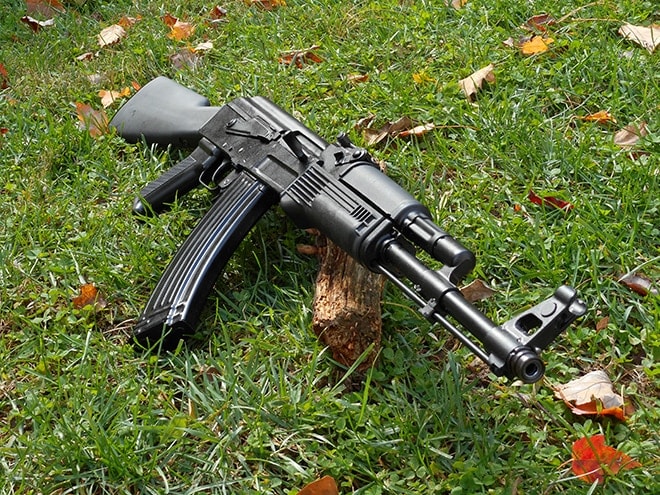 “It just isn’t for me”. I had to tell myself this over and over again whenever I saw a shiny new AK pattern rifle in the gun store. In the past, I’d owned several AK rifles of various sizes and configurations in both 7.62 and 5.45 calibers. These rifles just couldn’t convince me to keep them, and over the years I let them go; traded or sold for something else. 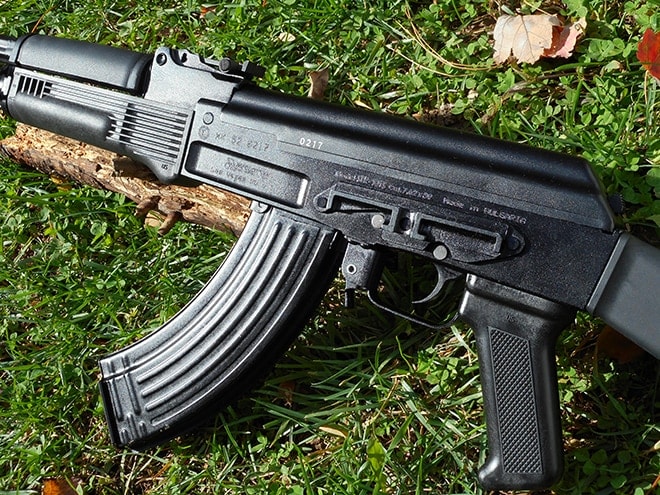 I reasoned that the basic AK pattern rifle was simply not for me. Just nothing about them connected. Whether it was the stock that was too short, the rudimentary sights, cheap-feeling stamped receiver, or the decidedly un-ergonomic controls, it seemed the AK couldn’t gain my favor in any form. Even all the hype of the AK’s reliability and hitting power didn’t help the AK connect with me the same way my Yugo war veteran SKS could. I told myself that my Colt AR-15 would be everything I need in a modern rifle. Whether that need was fun at the range or defending the homestead, I doubted I’d ever buy an AK again.

Then my local store had an Arsenal SLR-101S on it’s used rack.

And now that milled Arsenal rifle was sitting on my local store’s used rifle rack. 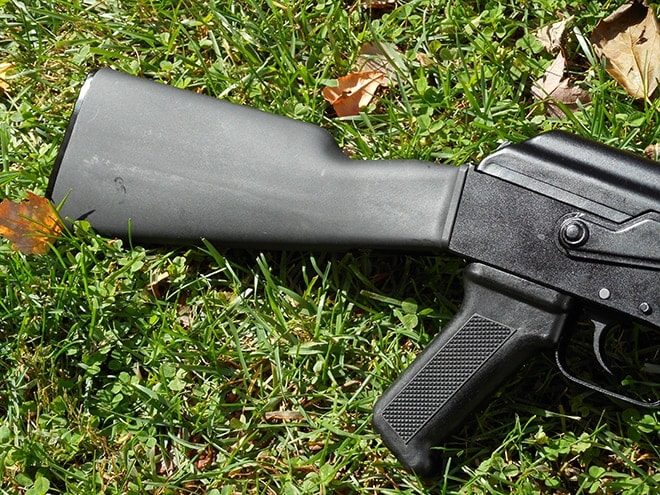 Despite these lofty claims, I still shied away from the Arsenal SLR-101S rifle. It was heavy; the milled receiver added plenty of extra weight. The price tag on the rifle was also $800. I couldn’t fathom paying $800 for a rifle that was designed along the lines of “better is the enemy of good enough”. AK’s were supposed to be inexpensive rifles of the proletariat, not expensive pieces of bourgeois machinery.

Yet the rifle remained in the back of my mind for the better part of the week. I heard so much about these rifles, and the few people that I knew who owned them, loved them. I decided to take the plunge on this one, reasoning that if Arsenal’s famed quality couldn’t convince me to keep an AK rifle, nothing would. Alas when I arrived at the store, I was told it was already being held for someone else. But then a small miracle happened.  As I was filling out the paperwork for another rifle (I like to buy guns), I mentioned the SLR-101S and a little bit of my history with AKs and the employee behind the counter told me to hold on. He returned seconds later holding the rifle telling me to go on and buy it. I did, and took that as a sign that this would be the AK that I would keep. 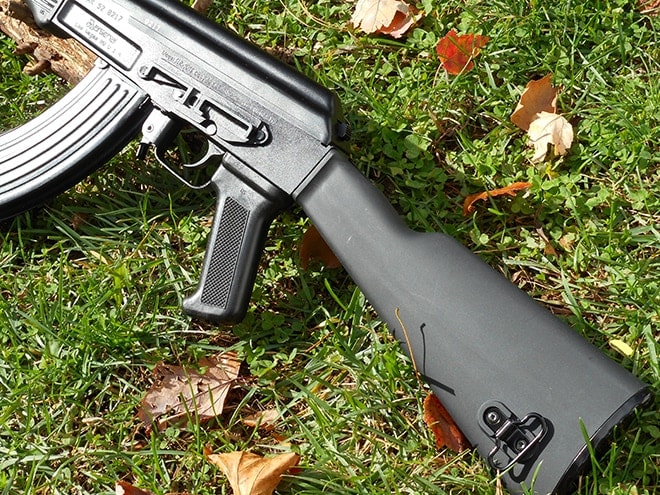 Doing some research the Arsenal SLR-101S rifle will tell you that it is essentially the same rifle as the currently offered SAM-7 rifle. The only difference is that the SLR-101S comes with a standard AK-47 muzzle nut, and the SAM-7 comes with a unique muzzle brake. For all intents and purposes however, they are the same rifle with the same Bulgarian made receiver and 14x1mm threaded muzzle. These rifles use only the minimal amount of 922r compliant parts, with the only the furniture and two parts in the trigger group counting as US made.

The SLR-101S is finished in Arsenal’s enamel coating, both inside and out. Despite its nice looks, the manual warns against using harsh solvents as it might strip the coating. I discovered this when some of the finish started showing up on cleaning patches soaked with Hoppe’s Copper Solvent. Should the enamel be stripped, there is a layer of parkerization underneath. 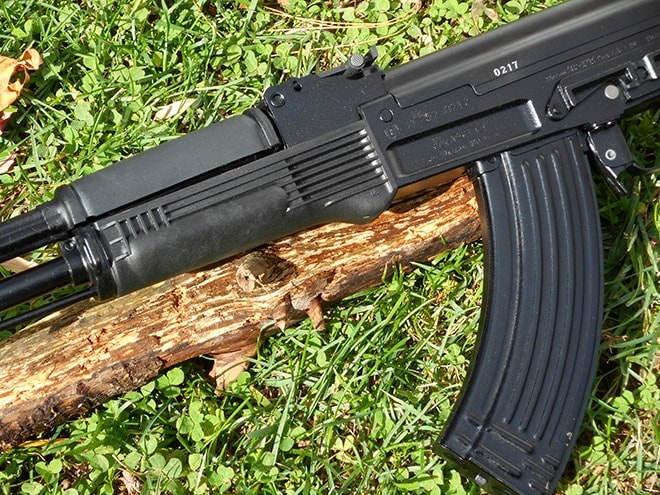 Thanks to the fact that these rifles are built new from the ground up and that all the parts travel and are built together means a superb action. The bolt carrier feels as if it is traveling on slicked up glass, and trigger is a nice two-stage piece with a light and crisp break. That is not a typing error: the SLR-101S has a crisp AK trigger.

The rifle also features a hammer-forged, chrome lined barrel like all good AK rifles. This doesn’t matter as much to me as it may to others, as I haven’t seen corrosive 7.62x39mm ammunition in years. However it does make the barrel easier to clean and more resistant to wear and corrosion. 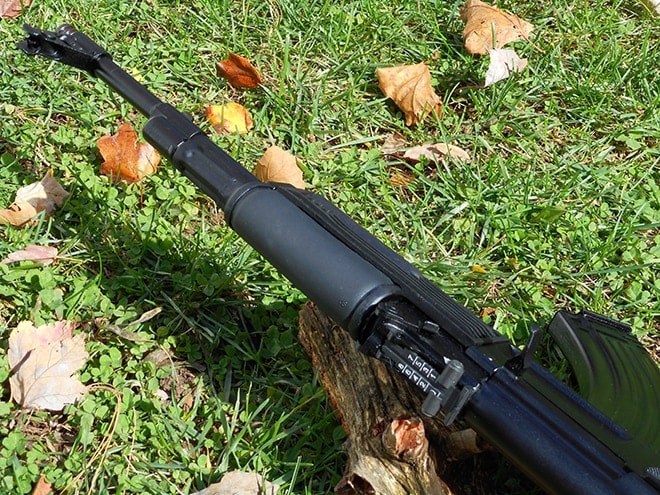 The only downsides to the rifle are essentially the limits placed on the family by it’s original design. Namely the safety which is loud enough to alert half of the battlefield, and the Warsaw Pact length furniture. While the magazine release isn’t perfect, it gets easier with practice. Take note that if you wish to replace the furniture, ensure that you buy milled receiver specific parts and that the buttstock is cut for a two-tang receiver.

The limitations of the iron sights can be remedied with a variety of aperture sights available on the market. However the SLR-101S comes standard with an AK-pattern side scope mount should you feel the need to scope the rifle. Although the standard AK iron sights aren’t the best, they do make target acquisition easy and quick. 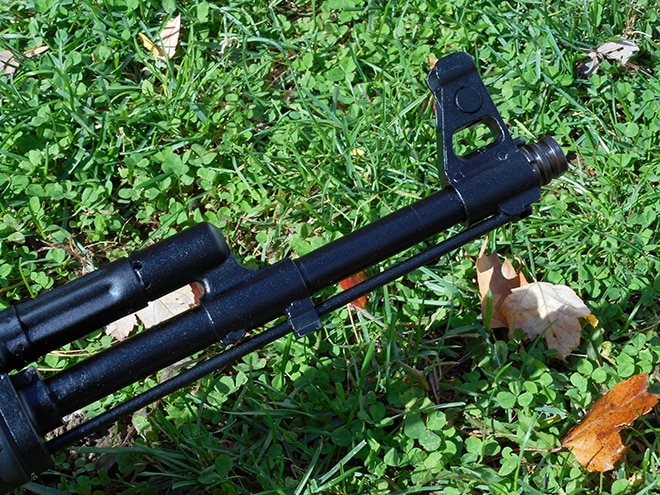 SLR 101S iron sights could be better but get the job done. (Photo: Francis Borek)

On the range the nice trigger and high quality barrel bring better accuracy than what you might expect from a standard AK rifle. Still this isn’t a tuned Remington 700.  Using a variety of steel cased ammunition, the best five shot groups of the day were from Wolf Military Classic, coming in at just under one and three-quarters of an inch. I’m certain that if it weren’t for the iron sights, I could bring the groups down to one and one-quarter of an inch.

However the AK wasn’t really made for precise long range shooting. The rifle was made to be easy to build, maintain, and to learn to operate. Soviet soldiers were conscripts who weren’t expected to fire past 300 meters, as the Red Army had learned from World War Two. If you want something that can reach past 300-400 meters, you should probably be looking for a rifle in a larger caliber. Even the Soviets realized this and kept the Mosin 91/30 sniper variants in service until the introduction of the SVD rifle. 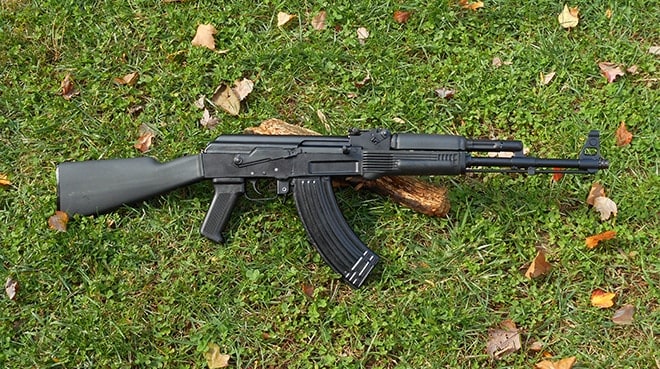 The SLR-101S is the AK I’ll finally keep, and has brought me down off of the fence. It’s high quality construction, finish, and reliability will ensure that it remains in my collection sitting next to famous rifle like the 98k Mauser and the Krag-Jorgenson. The SLR-101S blends both the old world of forged steel represented by the Mauser and Krag, and the modern style of polymer furniture and intermediate cartridges like the AR-15. The current production SAM-7 rifle can be had for around $1200-$1300. If you’re lucky you can find the SLR-101S for around $400 less than that.

If you’re going to only own one AK rifle, make sure it’s the best.  Many people will never give their SLR-101S up, and I am now one of those people.