Blame it on the Germans

Before the M1 Carbine was added to the U.S. Army’s inventory during World War II, soldiers in the rear serving in a more supportive role were often only equipped with a 1911A1 pistol to fight off the Germans and their Blitzkreig tactics. But as great as the iconic handgun was, it just didn’t have the range of an M1. Now, the M1, like the 1911, is one of the most celebrated military arms in U.S. history. It is a lightweight, light recoil, semi-automatic rifle that fires a cartridge of intermediate power.

What was to become the M1 Carbine was developed by Winchester in a hurry — about 13 days! They took the basic design of their M2 rifle and scaled it down for the .30 Carbine round.  Since the Army liked the design so much, in just a few short months it was refined and accepted.

Recently, Auto Ordnance began reproducing the iconic gun, calling it the AO130. While quality in some aspects could be improved, quibbles aside, it’s a fairly accurate reproduction of the early WWII rifle. 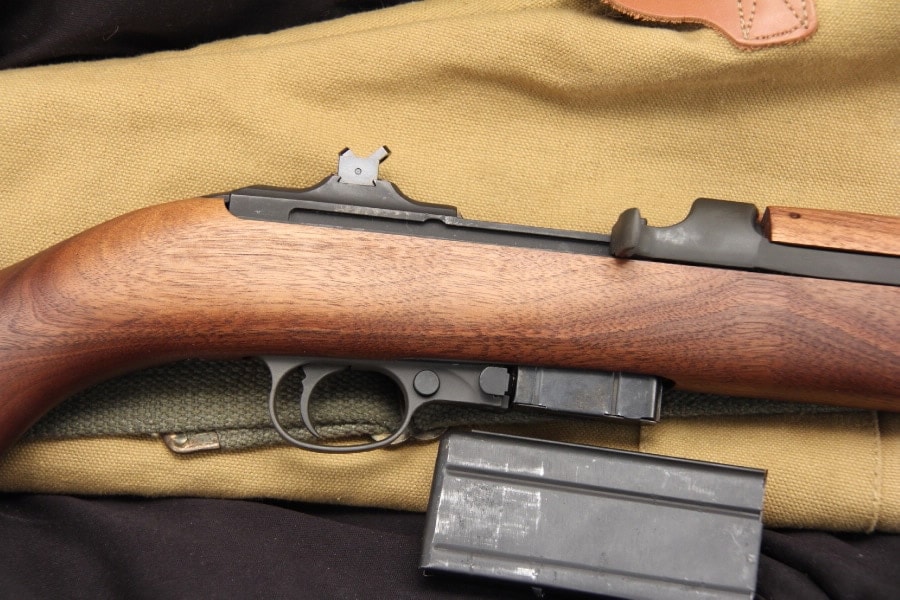 Folks at Auto-Ordnance used an original carbine that was made by Saginaw for the basis of their reproduction. Like the original, the AO130 has an 18-inch barrel and uses a short stroke gas system, it has the original style rear peep sight instead of the adjustable one, and it also lacks a bayonet lug.  It wasn’t until late 1944 that bayonet lugs were placed on the carbine.  Very few of them saw service during WWII but most of them were retrofitted with the lug after the war.  It is pretty rare to find an original without the lug today.

The AO carbine looks the part of a WWII production gun.  The Parkerizing is well done, the walnut stock is cut and finished correctly, and it ships with a 15-round detachable magazine like the originals (10 rounders are also available). 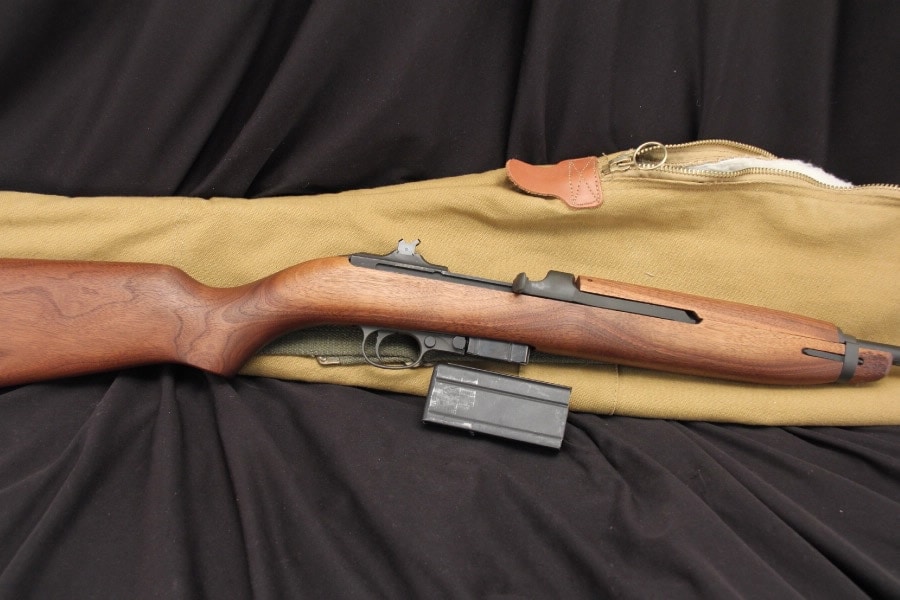 So how does the Auto Ordnance M1 Carbine stack up to an original?  Well, it certainly looks and feels the part.  The weight is correct at around 5.4 pounds.  The fit and finish is in line with originals I have used, which is to say it is a military arm and not a fancy target rifle. On that note, how does it compare when it come to the part that matters: shooting?

Over the course of a few months I ran multiple boxes of ammo through the Auto Ordnance carbine. I used Remington FMJ and SP ammo and the Steel Match from Hornady. The accuracy of the three different types was all about the same. The best group was at 50 yards with Hornady ammo and it was just over 3 inches.  Not bad, but far from great. Both types of the Remington ammo used shot about a half inch bigger on average.

And functional performance was a bit spotty. I had a number of functionality issues with the Auto Ordnance carbine.  The factory magazine is out of spec, and actually fell out of the well while firing. It would also not load the Hornady Steel match rounds.  They are about a 1/100th of an inch longer than the Remington ammo, but still within the SAAMI specs. 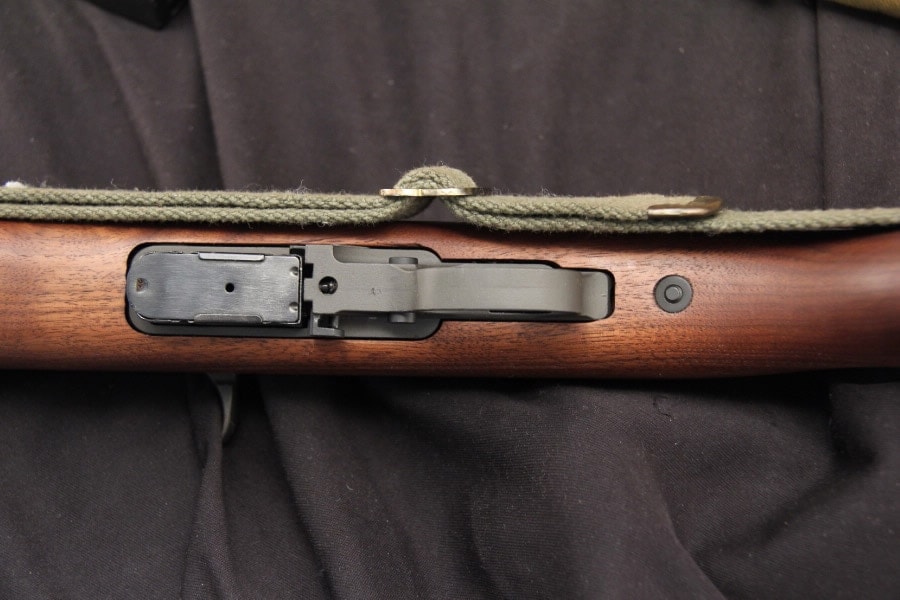 To test this theory, I was able to borrow a number of original WWII issue magazines and those did not fall out.  The Hornady rounds all loaded into the original mags without trouble as well. An out of spec mag won’t work in a gun that is made to spec.

I also had a number of failures to feed, extract and double feeds. The first time I took it to the range I only had the factory magazine. I gave up after 15 rounds and took the carbine home for a full disassembly. 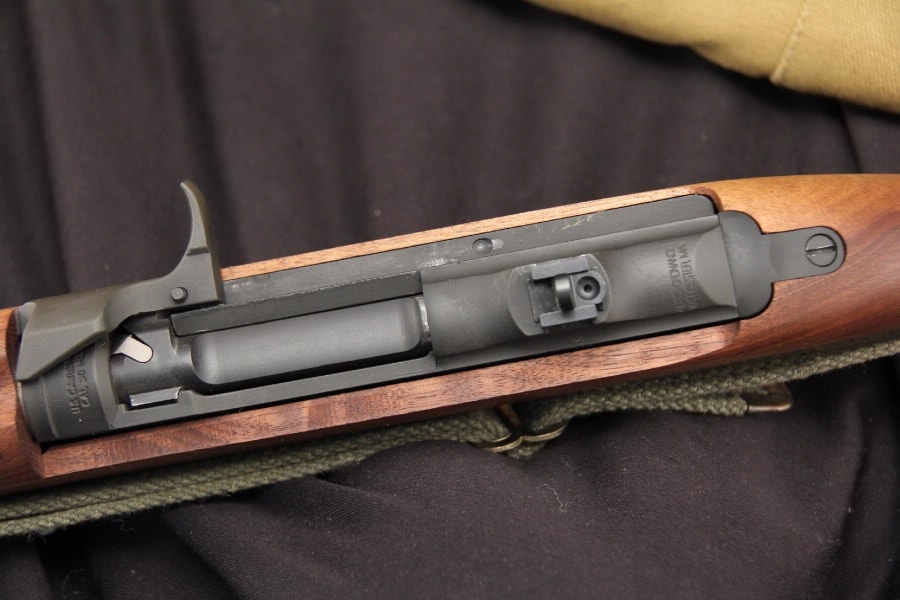 The second trip, the one in the video, I had the original G.I. issue magazines.  The carbine functioned a lot better with them.  Still had some failures to feed and extract.  These happened with both the steel and brass cases. But the original mags did not fall out!  The factory one still did.

I took it out one more time for a “fun” range day with some friends.  I didn’t mess with the factory magazine.  The carbine fared a little better this trip. We only had a couple of malfunctions that were easily cleared.

While the AO130 looks the part of a WWII issued rifle, if I was storming a beachhead or jumping out of an airplane over Holland I wouldn’t want the AO in my hands.  A well-maintained or restored original should be a lot more reliable for not a whole lot more money.

The MSRP is $816, so street price should be around $600.  For around the MSRP price you can find a good original “shooter”.  It will be a mixed bag of parts and will probably have the later and post war sight and bayonet lug, but it will be an original.  With that said, a new one from AO would be perfect for the WWII re-enactor.  It is outfitted to look like one that would have been seen during the war in both theaters. Another big plus is that it doesn’t look 65+ years old.