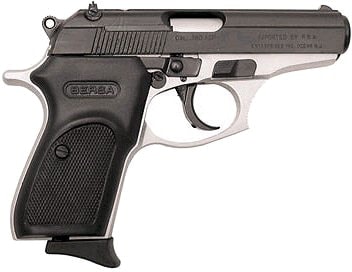 Whenever anyone asks the question, “I’m looking for an inexpensive, reliable handgun for concealed carry,” one of the answers will invariably be “Check out the Bersa .380s.”  And it’s a very good answer.

These guns set aside finish for rugged simplicity and are dandy little pistols.

Bersa’s pistols are popular on both American continents, owing in part to their Argentine origins, but also due to a long track record of being priced below what they’re worth, and bringing a consistent and reliable level of operation not common to handguns costing $300 or less—in our experience one ran 50,000 rounds before breaking, and even then, it still sorta worked.

Their Thunder 380 pistols are their most prominent, since .380 ACP is often the most powerful handgun cartridge allowed to civilians in many South American countries, and in the States, well, they’re just a bargain. 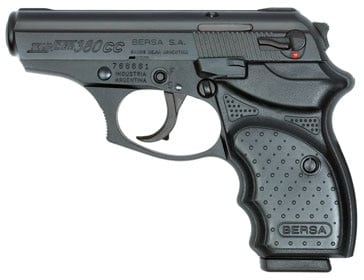 There are several models of .380s made by Bersa, but they all offer roughly the same feature set, starting with a chunky alloy frame and steel barrel and slide that brings the basic model’s weight up to 20 ounces.  If it weighed any closer to a pound, the gun would be no fun to shoot; .380 doesn’t feel under-powered in most pocket pistols…

They are blowback-operated and have 3.5-inch barrels, which is a bonus when you want all the muzzle velocity you can get.  They come with 7-round magazines with pinkie rests, although 9-round mags are available, and they come in matte black, two-tone, and satin nickel finishes, save for the Thunder 380 Plus, which only comes in matte black or nickel.  The Thunder Plus is a .380 powerhouse, too, with a full double-stack 15-round magazine. 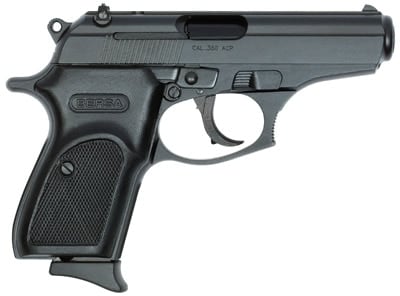 There’s one other Thunder 380, the Concealed Carry.  The CC has a slightly shorter 3.2-inch barrel, a tweaked finger-grooved frame, and a capacity of 8+1.  The Thunder 380 CC eschews the adjustable 3-dot sights for fixed, dovetailed sights.

One of the things that’s great about these Bersa pistols is that there’s a strong aftermarket for them.  Pretty much every major and most minor holster companies makes leather for these pistols, plus you can find nicer grips if you dig online a little.  And Meprolight makes night sights for them, and both LaserLyte and Crimson Trace manufacture laser sights for these .380s, too.

Looking around today, you can get a Thunder 380 for well under $300, which leaves any bargain hunter left with plenty to spare for magazines, ammo, and a carry rig.

The plain manual of arms, easy maintenance, and simplicity of these pistols make them great for beginner shooters, too; 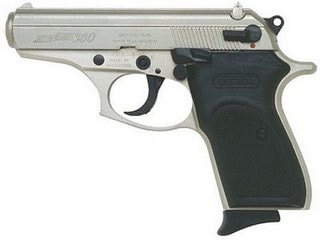 if you’re looking for a decent first pistol to go with your shiny new conceal-carry permit, you can safely know that your money won’t be going to waste here, and even if you change your mind down the road, well, you’re only out a couple hundred bucks.

Besides, someone will take it off your hands.  These guns have a lot of friends.

Sure, they don’t have great finishes.  But the function’s what matters in this price range, and that they’ve got in spades.  Even the triggers on these guns are surprisingly nice.  So yeah, if you’re looking for an inexpensive, reliable handgun for concealed carry, yes, do check out Bersa’s .380s.  They’re a bargain.