Hi-Point pistols have their place, and though we would absolutely recommend someone looking to save money on a handgun to first consider a used police trade-in or surplussed military sidearm, we respect a company whose goal is to make firearms accessible to everyone.

Accessibility here being another word for affordable.  And Hi-Point continues with their philosophy of affordability with their carbines, but with one thing of note: Hi-Point carbines are surprisingly accurate, durable, and reliable firearms.

Because they’re carbines, they aren’t exceptionally heavy, the blow-back action doesn’t require grip strength to ensure reliable cycling, and their looks just aren’t as awkward.  We won’t call them elegant or attractive, but the price sure is.

You can get Hi-Point carbines from anywhere between just under $200 to a little over $250, depending on where you shop and how patient you are to get a deal.  That’s cheaper than the closest competitor, the Kel-Tec Sub 2000, by more than $50, and most would agree that the Hi-Points are slightly better built. 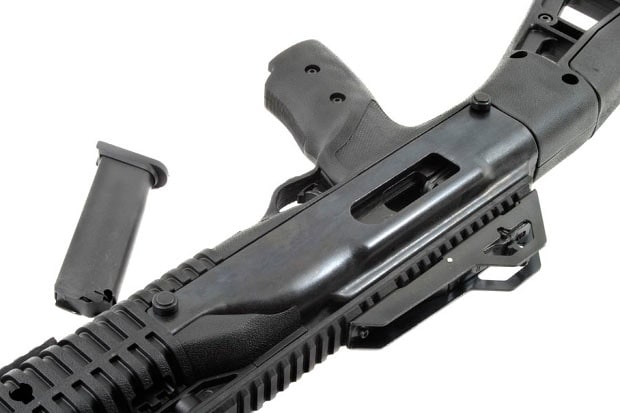 There are very few negative reports of Hi-Point carbines; and the few problems that people have had are more often than not magazine-related.  That’s probably the only real weakness of these firearms, the magazines.  Although it’s not due to their construction, but rather, their capacity.  Hi-Point carbine magazines only hold ten rounds.  Fifteen-round magazines are available, but they’re made by ProMag, and are hit-or-miss for quality.

So what good is a single-stack pistol carbine good for?  More than plinking, that’s for sure.  A carbine that’s lightweight and reliable and inexpensive to practice makes an easy suggestion for a home-defense gun or even more serious work; many police departments on tight budgets have adopted Hi-Point carbines as patrol rifles, chambered in the same calibers as their issued sidearms, and many more recommend them.

Originally, Hi-Point Carbines were introduced in 9mm Parabellum, but due to massive demand, they’re also available in .40 S&W and .45 ACP.  And of course, out of a 16″ barrel, those pistol bullets become a completely different animal.  Ballistics by the Inch has some great data pertaining to firing pistol ammo through long barrels, and in most cases, the extra length adds 200-300 FPS in muzzle velocity.

Hi-Point’s stocks have gotten an overhaul of late, with recoil-reducers and tactical rails for grips and accessories in addition to the rail for optics, although the iron sights included with the basic carbine package are easy to use and adjust.  They’re all-metal peep sights that, like the guns, can easily withstand rough handling.  Hi-Point also has their own little aftermarket for them, with stock-mounted magazine carriers and lights and lasers and all that, also fairly inexpensive.  A mag holder and two extra mags costs only $40.  But if you don’t like them, ATI makes aftermarket stocks that look a whole lot like Beretta carbine stocks for not much money at all.

If you’re looking for a truck gun, a gun for novice or inexperienced shooters, a gun that’s as cheap to shoot as a pistol but easier to use and hit things with than any handgun, or are just on a very limited budget, you owe it to yourself to look at Hi-Points carbines.  At just two bills with a lifetime, no-questions-asked warranty, it’s practically impossible to get more for less. 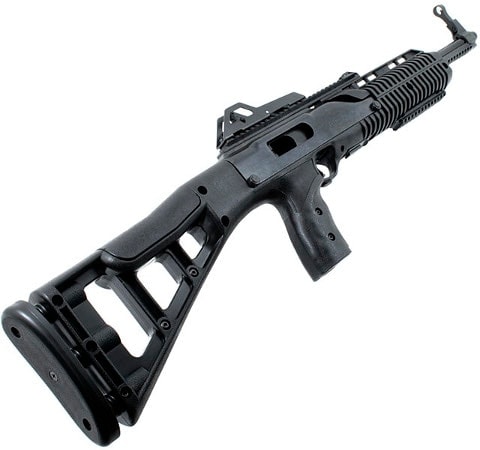