The CZ P07 Duty is a great, accurate, and inexpensive service pistol.  Of course, it should be mentioned that on the whole CZ brings a lot to the table at very reasonable prices, but the P07 is a different kind of handgun for CZ and deserves some special attention.

The P07 Duty is a compact, lightweight polymer hammer-fired 9mm service pistol, with wide-body full double-stack sixteen-round magazines, (twelve in .40 S&W) and doesn’t share much of the family resemblance that CZs are so instantly recognizable for.  And the truth is that there isn’t much they have in common. 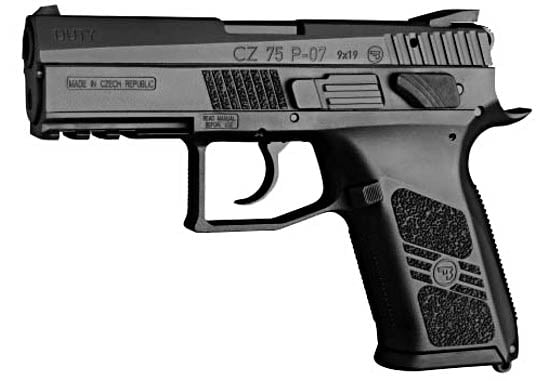 First off, CZ hasn’t been making polymer-framed pistols for too long, so that there alone is one major departure from CZ’s stock and trade.  But it’s well more than just the frame of the P07 that’s changed.  The lockup is different, the Duty uses a single barrel lug that slots into the ejection port on the slide, it doesn’t have the radiused lugs around the barrel.

Out of the box the newer Omega trigger is smoother than a factory CZ trigger; it has little to no break-in period.  The trigger geometry is significantly different, significantly simpler, and significantly SIG.  They have a lot in common, except that the P07’s Omega trigger isn’t a fixed DA/SA decocker; that’s its factory configuration, but you can swap the decocker for a safety if you prefer your guns cocked-and-locked.  CZ includes the safety selector, you don’t have to buy one separately.

The sights are also different, but if you don’t like the factory contrast sights CZ makes fiber-optic, target, and night sights, so you’re not limited there.  Holsters may be harder to come by but as a rule, if it’s made for an XD, the P07 will feel right at home. 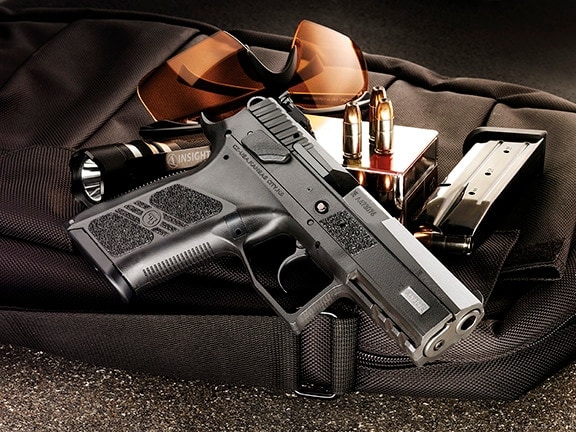 What the P07 has in common with its metal siblings is ergonomics.  The grip angle is magic, and the texture provides traction like you wouldn’t believe without simultaneously feeling like you’re grabbing a file.  The slide rides inside the frame, giving the gun a low bore axis and high grip that combine to make for a very soft shooter.  The gun also has texturing along the sides of the frame if you shoot thumbs forward; it’s also a handy tactile spot to put your trigger finger on while maintaining discipline.

Older CZ P07 Duties had some frame problems, but they’re gone now, and CZ is using a new mold and a polymer with a higher glass content.  (If you have an older P07, CZ is replacing the frames under warranty.)  They’re also available in olive drab green in addition to black, with flat dark earth coming soon.  There is also a model coming to the US with an extended, threaded barrel and adjustable suppressor sights that we got to fondle at length at SHOT Show last month.  (Threaded ½x28mm and compatible with silencers up to an inch in diameter; both are priced to be in line with existing P07s, woot.)

All said and done, the P07 is a serious duty pistol, with the match-quality accuracy and dependability expected from CZ.  But unlike other hammer-fired polymer pistols, you can find the P07 for well under $500, and sometimes under $400; it comes with a cleaning kit, a case, and two mags, and is a fantastic bargain.