When Ruger first announced the American series of rifles everyone took notice. They promised a sub-$400 bolt-action rifle for both hunting and target shooting with excellent features at a terrific price. But news of their impending backlog took the wind from their sails in a hurry. Now they’re back and shipping in quantity.

We didn’t forget about this neat, lightweight rifle we had the opportunity to fire at this year’s SHOT Show. And now that they’re in stores and in quantity, we’d like to remind everyone about this nice little rifle. 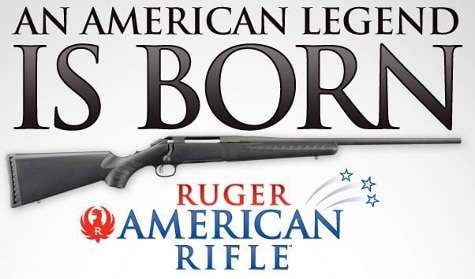 Little isn’t the best way to describe the American. All four models, chambered in .243 .270 and .308 Winchester and .30-06 Springfield come standard with 22-inch barrels. What is little is the weight. With its slender, tapered barrel and polymer stock, the American rifle weighs in at just 6.25 pounds (6.12 in .30-06). It’s a great weight for someone who expects to haul the rifle around. In all chamberings, the American feeds from four-round rotary magazines.

The barrel has no frills. Aside from the plain matte black finish, the barrel is unadorned with sights (scope mounts are included) and is not threaded for muzzle accessories. The stock, while utilitarian, does have two features worth mentioning, and that’s an integrated recoil-absorbing buttpad and stainless bedding struts that allow the barrel to float freely.

Also included is a user-adjustable trigger that can be set between three and five pounds that breaks very cleanly and predictably. The bolt uses three large lugs and has a 70 degree throw that’s optics-friendly. The bolt also has dual cocking cams that are incredibly easy to use for such an inexpensive rifle, and we had no issues cycling the American while shouldered. It also has a tang-mount safety that’s easy to reach.

Being so lightweight, it’s easy to shoulder and handle the rifle, even while standing for a while. When Ruger designed the American, they didn’t reinvent things. The reason the rifle costs so little while delivering so much is that Ruger re-thought the manufacturing process. Instead of using modern machining to facilitate older manufacturing methods, they redesigned the way the rifle should be made with the newer tools at hand.

By cutting certain features like iron sights and going with polymer for the stock and magazines, they’ve managed to put together an extremely simple and inexpensive rifle that has shown impressive out-of-the-box accuracy.

If you’re looking for a solid hunting rifle or inexpensive target rifle, you should check out the Ruger American. Often priced around $350 and sometimes as low as $300, this rifle will leave you with plenty of money left over for glass and ammo.