Finding a good handgun for $300 is rare, and usually, the smart move is to go used.  But there are good guns that can be had new in that price range, and the Ruger P95 is a real gem.  If anything, the price is so low people might make the mistake of overlooking it.

The P95 is a fairly routine design, on the outside.  It’s a double-stack polymer-framed wondernine, a double/single-action pistol with plain 3-dot sights.  The capacity’s right in the middle, at 15+1.  You can change those, many companies including Trijicon and Meprolight make night sights, and Mec-Gar makes stellar 17-round flush-fit magazines.  You can find holsters for them from almost every major manufacturer, too.

The P95 doesn’t stand out from its peers in any significant way other than the pricetag.  But in that sense, it’s competitive with guns that can cost double and not do the job any better.

Ruger pulled that off by going in a significantly different direction on the inside of the gun.  Unlike so many other designs, the P95’s slide doesn’t lock into the frame.  The slide locks to the barrel, and when it cycles, the barrel locks into the recoil spring guide.  The frame is essentially just there to give you something to hang on to.

There are rails in the frame that the slide runs along, but they’re not stress parts; like the lower receiver on an AR.  In the end, it means that the frame doesn’t need tabs inserted into it like other polymer pistols, nor any fitted sub-frames.  It takes less work to turn them out, which is what makes them so inexpensive to produce. 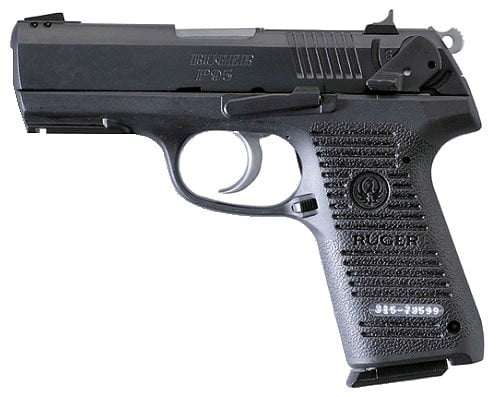 That also makes the P95 pretty lightweight, without sacrificing the thing that Ruger’s most famous for: reliability.  That, combined with the low cost, is what made the P95 the duty weapon of the US Army Tank-Automotive and Armaments Command, as well as a handful of law enforcement agencies around the country.

Like any good Ruger, you can do some pretty mean things to it without having to worry about its function.

From GunWeek: “In short, the test program went smoothly. The firing was enjoyable, and all who handled and fired the P95 gave the pistol good marks. As we neared 2,500 rounds we began to experience sluggish function from built-up lubricant and powder ash. I deployed the heavier full-power loads at this time and the increased slide velocity kept the P95 going until the 3,000-round mark. I find this exceptional.” 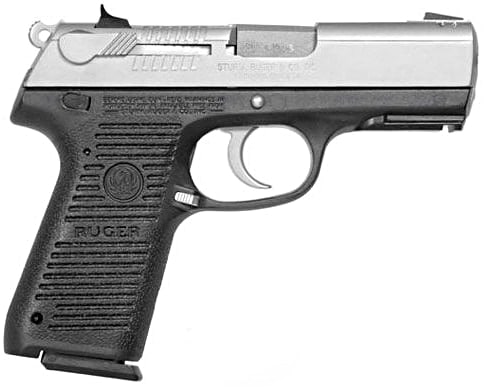 It’s controls are more-or-less ambidextrous, too, with a slide-mounted ambi safety/decocker and magazine release, the only thing that’s fixed to the left side of the gun is the slide stop; you can always slingshot it.  About the only complaint anyone’s had about them is a rough trigger.  Shooting it will solve that problem for you.  It’s a service pistol, after all.  But if you want to lighten the pull, that’s a quick fix, too.  Because it’s DA/SA, if you change the mainspring for something a little lighter, you’ll see a major improvement from the factory 9lb/5lb pull.

So if you’re looking for well-balanced all-purpose 9mm handgun, something that’s light without being uncomfortable to shoot, a knock-around pistol, or are just on a budget, do yourself a favor and seriously consider the Ruger P95.