A lot of people are distrustful of these innovative, but once-troubled handguns.  Now it’s safe to say that SIG has worked out the bugs and the P250 is an easy gun to recommend, for a handful of reasons.  It doesn’t hurt that you can pick one up for $350.

The reason SIG can sell them for so little is because of how amazingly simple they are.  (And they are selling like crazy, we asked SIG how the P250 was doing and the demand is great, it’s one of their movers, which concurs with what we’ve been hearing from dealers.)

The P250 is a double-action-only pistol with one of the most mechanically-straightforward actions of all handguns.  We’ve said it before and we’ll say it again, there are more complex revolvers.  It’s quite easy to appreciate when you pop the fire control unit out of the frame for a closer look. 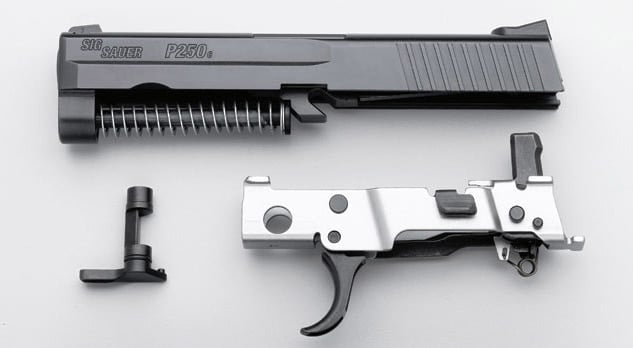 That’s the firearm, there in stainless.  Legally speaking, anyway.  There’s noting else inside the grip other than the magazine release (which is reversible to go along with the ambidextrous slide stop release).  There are three sizes of P250, full, compact, and subcompact, but only one size of FCU.  You can buy SIG X-Change kits to convert your P250 into any other P250, in any caliber, 9mm, .40 S&W, .357 SIG, .45 ACP, and as of this year, .380 ACP.

Quick aside on the .380.  A lot of people are scratching their heads on that one.  But we shot one at SHOT, and we get it.  It’s possibly the softest-shooting handgun in production.  It’s almost like shooting a CO2-powered airsoft pistol.  For anyone who is recoil-sensitive, you must try the P250 on for size. 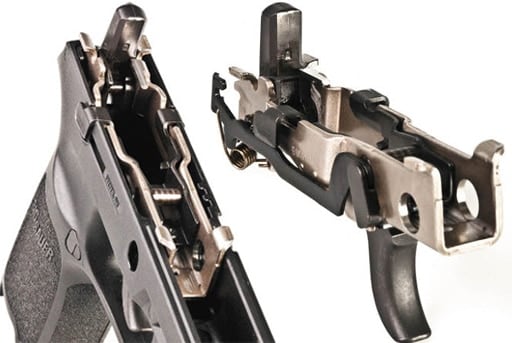 Also, it’s an export.  Many countries ban the use of so-called “military” calibers from civilians, limiting them to handguns chambered in .380 ACP or less; SIG will snap up a good chunk of the market with these inexpensive 15+1 P250s (12+1 for the subcompacts).  It’s also nice for countries that limit you to a certain number of firearms; you can have one gun that fills several roles.

Like all P250s, the .380 had a really great trigger.  It’s without a doubt the best revolver trigger ever made.  It feels like a custom-tuned Smith & Wesson with light springs and 100,000 rounds through it.

Yeah, some people don’t like that.  It’s long, and you have to let it go completely forward to reset.  But the action is so smooth it’s unlike any DA trigger you’ve ever pulled.  They’re average weight for polymer pistols, 25 ounces for the sub, 29 for the full size, and depending on your grip (small, medium, and large), between 1.1- and 1.4-inches wide.

Caleb of Gun Nuts Media competes with his P250; don’t believe ’em when they say it’s not a shooter

And at $350 for one with contrast sights, and a little over $400 with night sights, it’s great for someone who wants an inexpensive handgun, whether it’s to leave in the car or as a starter gun to learn with.  Oh, and in case you were curious, it is available in Diamond Plate now.