I’m just not cool enough for the TP-9. That has to be the explanation.

The Steyr TMP is a highly respected little machine pistol in 9mm Luger. I’ve never handled or shot one. They also had a civilian-legal version called the SPP which was semi-auto only, with a single grip and Picatinny rail. Which I also haven’t had a chance to try either.

But a few years back, the Swiss firm Brügger & Thomet AG (B & T) bought the design of the TMP/SPP from Steyr and started producing the guns, calling the civilian-legal version the TP-9 (Tactical Pistol – 9). D.S. Arms began importing the TP-9, and a buddy of mine got one. When we were doing the 9mm Luger tests for BallisticsByTheInch.com I had a chance to look over and shoot his new TP-9. 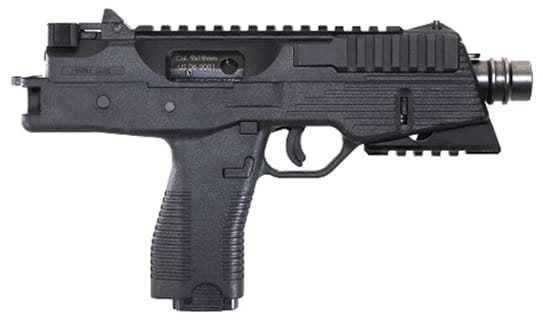 Well, I got to shoot it for a short period of time until we encountered a problem. If you look at the chart for the 9mm results, you’ll see that we only have numbers for about half of the different ammunition tested. The problem is the TP-9 locked up completely on us, with the bolt jammed open.

Now, the three of us who were shooting the gun are all experienced with a lot of different firearms. And one of us has a lot of experience with different full-auto and select-fire guns, including those similar in design to the TP-9. We couldn’t get the thing to work after a few minutes, and decided not to taken it apart there in the field – we had other guns to test that day.

So the TP-9 went home, eventually to a gunsmith and then back to D.S. Arms. I never did find out what the specific cause of the failure was, but in preparing to write this review I decided to check and see if others have had this or related problems with the TP-9. Turns out that a number of people have had similar issues with the B&T version. Seems that the advice from all the cool kids is to take the gun apart before shooting, thoroughly clean and heavily lube it, then manually cycle the action a few hundred times – and expect jams for a couple hundred rounds. After that, they’re supposed to run flawlessly.

I wish I was kidding.

Now, I don’t know about you, but if I’m going to drop well over a grand for a gun (current MSRP is $1,795), I kinda expect the thing to work reasonably well from the start. Yes, there’s always a bit of a break-in period for any new gun, with the occasional jams and whatnot. And even a well-made gun from a highly reputable manufacturer can have problems now and again. But when the standard disclaimer from someone doing a review of a gun is “before shooting it, you need to take it apart and thoroughly clean it, heavily lube it, and then cycle the action a lot”, there’s something wrong with the manufacturing process.

So, there ya go. If you’re willing to do that, or you want to get a TP-9 – one that has already been through this break-in process – here are some more thoughts about the gun.

Most of it is polymer, which isn’t a bad thing. The polymer guns I own, I like a lot – a couple of them from Steyr, as a matter of fact. The TP-9 felt a little ‘plastic’ to me, but overall the fit and finish of the gun seemed to be pretty good.

It came with one 15-round magazine, which fits sorta-flush into the bottom of the grip, and another 30-round magazine that extends well past the bottom, so it resembles a short-barrel Uzi. The Picatinny rails are suitable for all manner of lights, optics, and other tacticool stuff. The iron sights on the gun are basic, as is typical for this kind of weapon.

Again, I only got to run about a score of rounds through the gun before it locked up on us. But the recoil wasn’t bad (this is in part due to the rotating bolt mechanism used in the design) at all, shooting a mix of premium defensive ammo (both standard pressure and +P). Others report that the TP-9 seems to operate more consistently on a steady diet of +P ammunition, at least at first.

And I can’t really judge the degree of accuracy of the TP-9, since I only got to shoot it over our chronographs set up at 15 feet. But it worked fine. Most reviews or videos of the TP-9 I’ve seen indicates that accuracy is decent enough, and will serve the intended purpose of this gun as a self-defense/home-defense weapon.

And it does look cool. Tactical-cool. Movie-cool. If that is important to you then find one that has a proven track record, or be ready to put up with the problematic break-in period, and you’ll be set.