Battle of the mag-fed shotguns: Vepr vs Catamount Fury II Battle of the mag-fed titans: Vepr 12, top, and the Catamount Fury II. (Photo by Jim Grant)

Anyone who hasn’t been living under a rock in the last 15 years has heard of the Saiga 12 magazine-fed shotgun. Based on the AKM rifles design, the Saiga 12 is basically a scaled-up 12-gauge AK, which is just as awesome as it sounds. Some Saiga shotguns can be picky with ammunition when first purchased, but this was acceptable given their low price. Now that their retail price has more than doubled, more and more competitors have joined the fray. Two up and coming stars are the Vepr 12 and the Catamount Fury. For the sake of fairness, I’ll be comparing the Vepr to the Catamount Fury II, the higher end Fury that includes a magazine well and has a similar MSRP to the Vepr.

Both the Fury and the Vepr utilize the same method of operation as the Saiga 12, but differ in additional features and the ease of modification. Taking all these elements into consideration, Guns.com will reignite the tensions of the Sino-Soviet split, pitting Russia against China in a battle for the best Saiga 12 alternative. 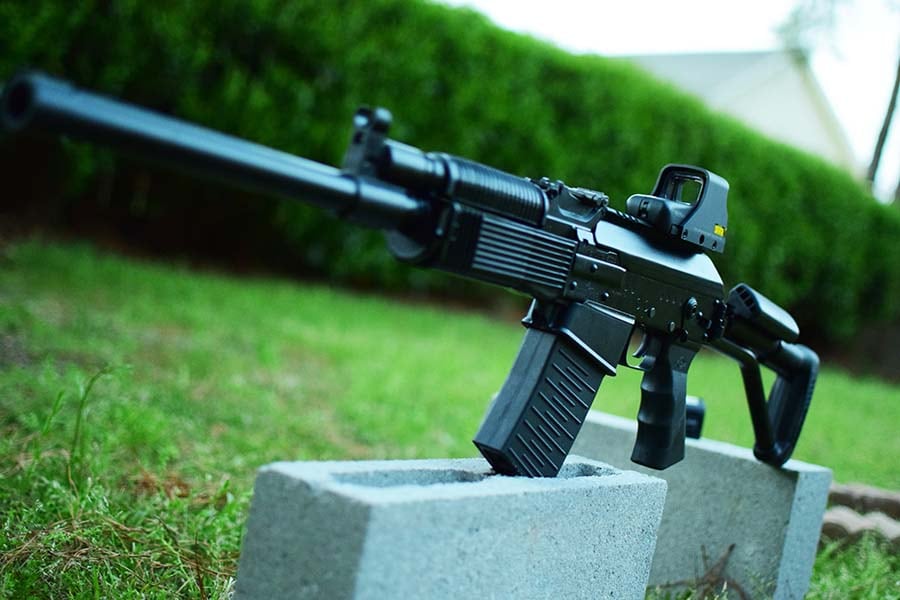 Both the Fury II and the Vepr 12 feature the distinctly oversized safety lever, betraying their AK lineage, but they differ in how the lever is manipulated. The Vepr’s safety has an extended trigger finger accessible lever and an ambidextrous safety on the left side of the rifle. The Fury II ships with a Dragunov style stock that looks cool, but impedes the shooter’s ability to comfortably reach the trigger.

The Vepr features a welded-open folding stock, to prevent 922r conflicts when importing, and an oversized AK pistol grip that is surprisingly comfortable. Both shotguns feature a bolt release near the trigger guard. The Vepr release is easier to reach, but the Fury II requires less force to operate. Both shotguns also feature cheek rests, but the Vepr is ambidextrous and the comb height for the Vepr is more appropriate for optics. 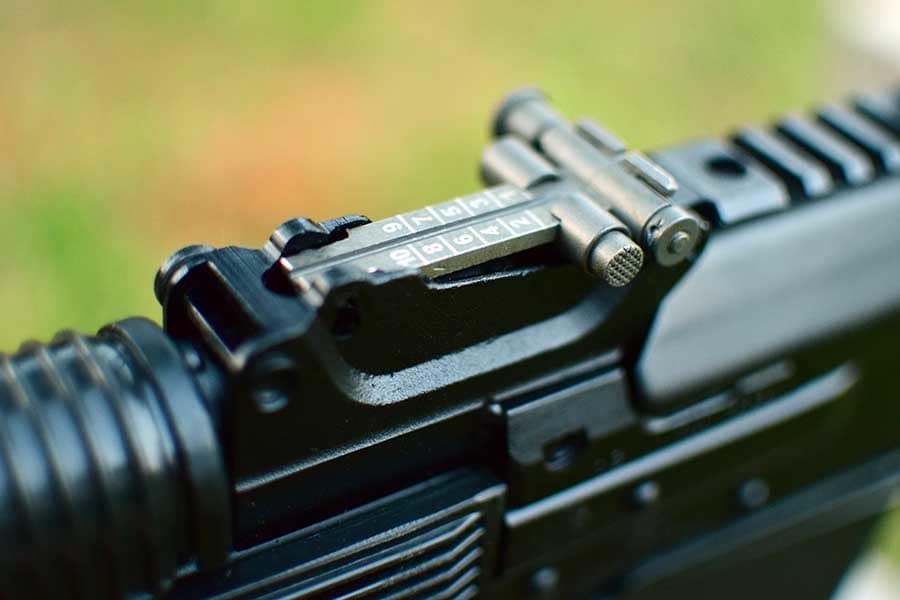 Adjustable iron sights on a shotgun, why not? (Photo by Jim Grant)

Shotgunners gravitate toward bead sights on their scatterguns, but AK-style shotties tend to employ rifle-style sights. The Vepr has a traditional AK-style notch and hooded post sights and the rear sight is adjustable for windage. The Fury II, on the other hand, has fixed, oversized post and notch sights. The Vepr’s sight radius is roughly 10 percent greater, which aids in precision aiming, but is an unnecessary feature unless you are utilizing slugs.

Both the Vepr and Fury II feature railed, hinged dust-covers for mounting optics, though neither is numbered. The Vepr has a slight advantage because the release button has an additional spring-loaded peg that prevents the cover from coming loose when firing extra powerful loads. In other words, the dust cover is extra secure. 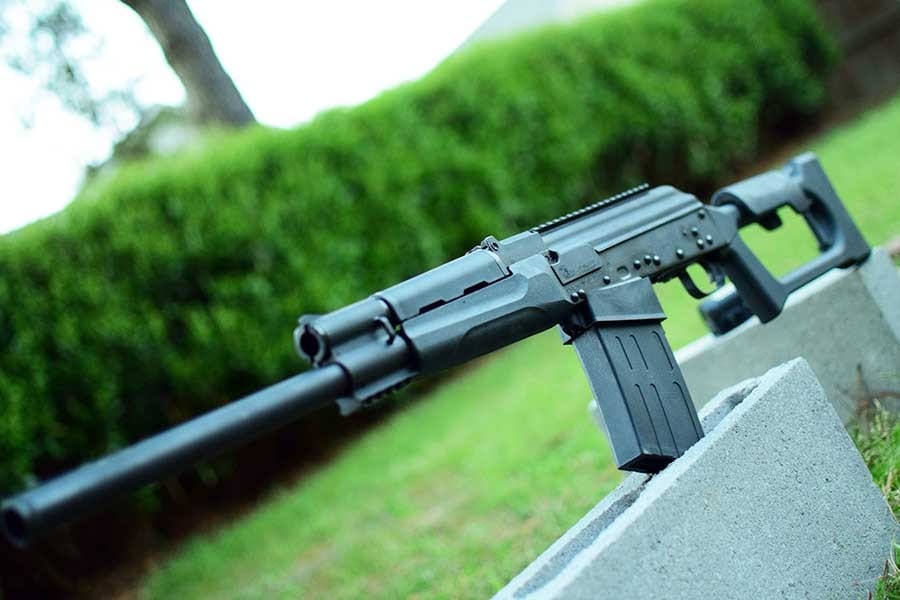 Both the Vepr and Catamount use identical operating systems. By default, the Vepr is set to wide-open and runs with everything except for the weakest shells. The Catamount’s gas system is adjustable, giving the shooter the ability to tailor the gun to the load used. This allows the shooter to minimize the recoil of the shotgun, a huge advantage when trying to run a shotgun quickly.

The Catamount Fury II is built in China and features a non-reinforced receiver, whereas the Russian-built Vepr 12 utilizes the same reinforced AK receiver that the Soviets built the RPK-74 (their LMG) on. 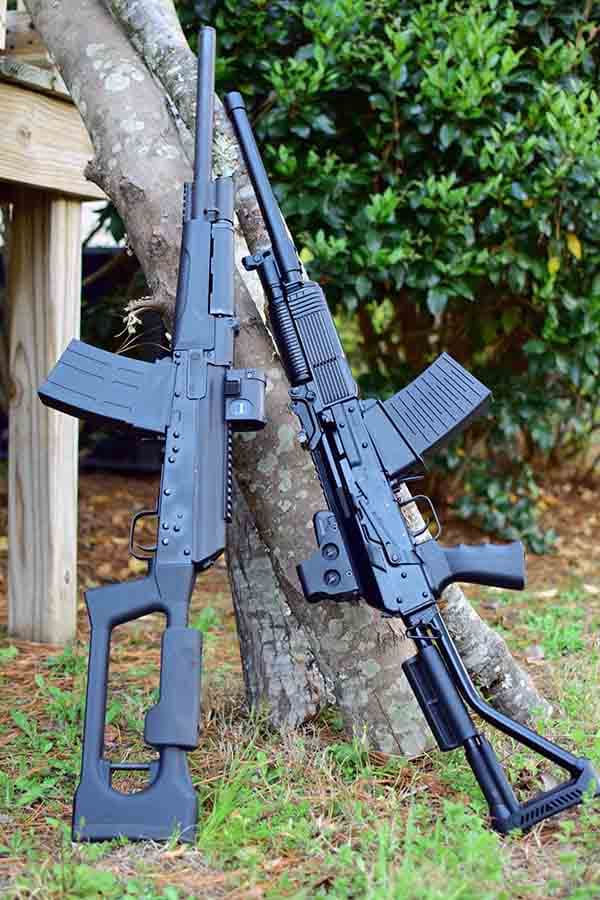 Both shotguns are built like tanks, Catamount Fury II, left, and the Vepr-12. (Photo by Jim Grant)

The Vepr’s stock is built from steel tubing with a synthetic recoil pad, while the Fury’s stock is synthetic. The extra weight of the Vepr’s more rigid stock also balances the shotgun better than the Fury II’s plastic furniture. Although the forward trunnion of the Fury II isn’t reinforced like the Vepr, the trigger area and grip plate are double reinforced.

The Vepr 12 utilizes RPK handguards and AK pistol grips and fire control systems. The Fury only uses AK FCS. While both shotguns utilize their own proprietary magazines, the Vepr can use modified Saiga mags and the Fury II can only use its own magazines. Keep in mind, new Vepr magazines are more than twice the price of new Fury II magazines, unless you modify existing Saiga 12 mags.

Overall the Vepr represents a better value. It comes pre-converted in pistol grip configuration, whereas the Fury II would require time and money to convert. Also, since the item is new, there are few places that would have the proper experience performing the conversion.

Even if you intend to leave the Fury as it comes, between the two rifles, I would recommend the Vepr 12 every single time, especially if you find them at similar price points. That said, when the Vepr’s price is closer to its thousand-dollar plus MSRP, the Catamount makes an excellent defensive shotgun.