When you read or hear the name Benelli, you automatically think of a European manufactured firearm.  Ordinarily that would be true, except for the Benelli American Series of semi-automatic shotguns.

These workhorse semi-autos are manufactured in the United States.  That bit of American made patriotism does add to their appeal but we must look beyond that and more at the shotguns themselves. Benelli offers the American Series in two different types of semi-automatic 12 gauges, the M2 and the Super Black Eagle II.

Both of these come with the built in and very reliable Inertia-Driven system.  They both also shared in the advantages of the Benelli Crio System which cryogenically treats the barrel and choke tubes to establish a more uniform molecular structure and denser composition of the metal for more reliability and uniformity in patterning. 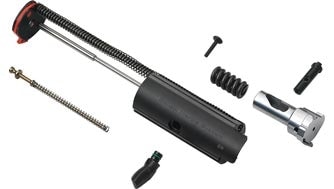 Although Benelli touts that these are their economical line of shotguns, they’re not cheap by any stretch of the imagination.  MSRP is $1,100 to $1,300. The more economical of the two, the M2, is a good field grade semi-auto. It is able to chamber light 2 ¾-inch loads as well as the heavier 3-inch magnum loads.  It is also available in black or camo.

The heartier and more expensive of the two series is the Super Black Eagle II, which is able to chamber all shotgun shell sizes from 2 ¾- to 3 ½-inch super magnum shells for hunting turkey and goose.  This shotgun has been often imitated and the jury is out whether or not the imitators are as good or possibly improving on the Benelli concept of the versatile shotgun.

After a day at the range, both models left me unimpressed.  I shoot shotguns a lot and stay in regular practice so when I was crushing clay targets with the SBE, I was not surprised.  My disappointment was that it shot just like any other gun I’ve held – a Mossberg 930, a CZ 712 – and it did just what it was supposed to do.  I don’t know if I was expecting the gun to speak to me and tell me to swing faster or open up my stance.  Maybe I was expecting to hear some angelic harps playing as I put my cheek to the stock.  I have nothing negative to say about it at all, other than the price.

However, the Benellis did do one thing that was beyond my expectation and that was its rate of fire.  It was a swift firing shotgun and it wasn’t anything that would antagonize my impatient nature.

Without a doubt, they seem to be very durable and are very comfortable to shoot.  They also both seem to be a shotgun that you can keep for a long time and for many successful seasons.  I just can’t justify spending well over $1,000 retail for this type of shotgun when there are other similar shotguns at as much as three-fourths the price.