The Benelli Nova: The third contender

When a gun owner is looking for advice on their first shotgun, they’re usually pointed towards the Mossberg 500 and Remington 870. Well-earned reputations for reliability combined with affordable prices make them natural starting points for budding shotgunners.

But for this review, I’ll discuss a third option anybody looking for a new shotgun should seriously consider: the Benelli Nova. 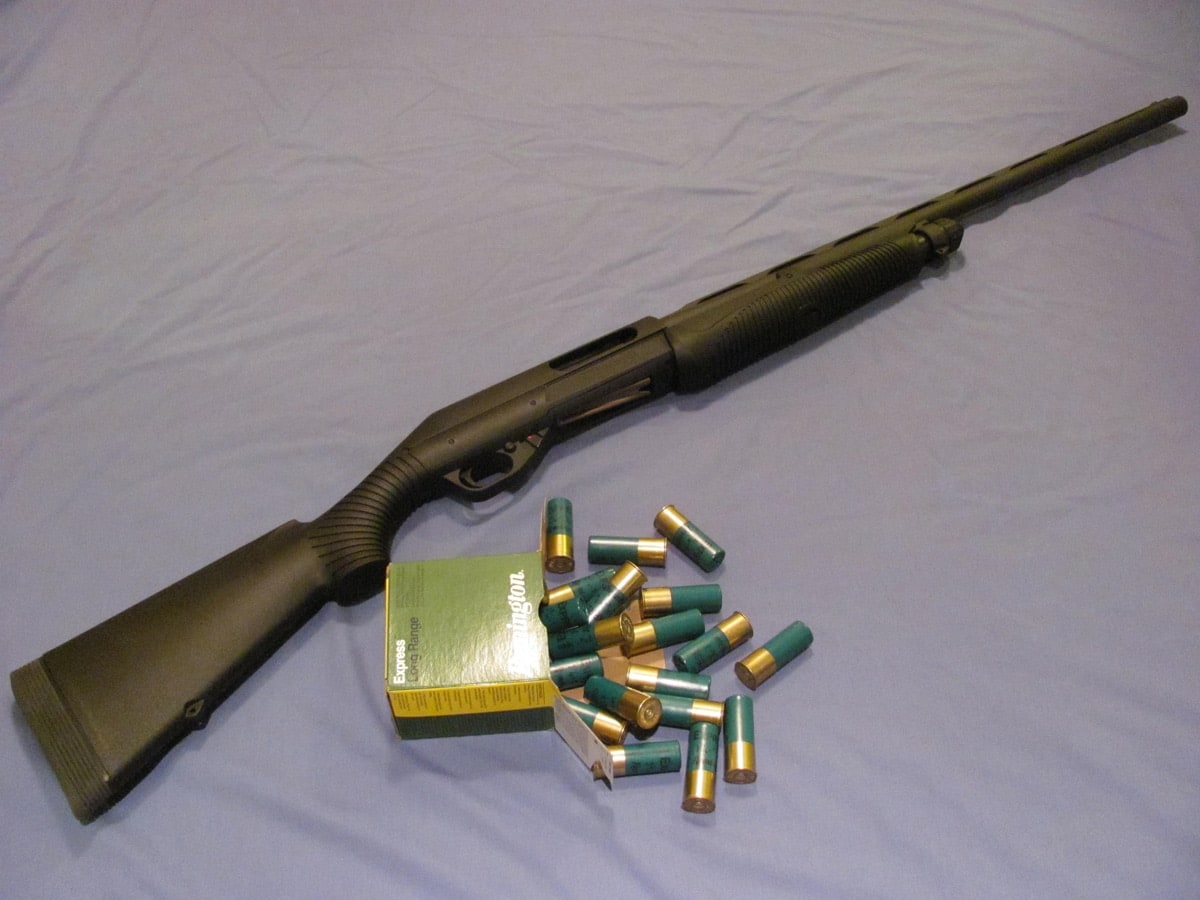 The Benelli Nova with an open box of “Oh my god I spilled the shells!” says the author. (Photo by Andy C)

The Benelli Nova: From back to front

Available in a few configurations, I’ll be reviewing the basic Nova. It’s the most direct comparison to the Mossberg 500 and Remington 870. Details on all models of the Nova can be found on Benelli’s website.

The Nova is a polymer-framed shotgun with a single-piece stock and receiver. A passable black recoil pad caps the hollow stock at the rear. A pistol grip leads into the action of the gun with a metal feed ramp and a left-sided ejection port. In the action, the bolt is moved by parallel bars attached to the forearm. The body of the Nova is a tough piece of plastic. Mine shows no outward marks of the abuse it has been subjected to. All considered, the design is rugged, easy to clean and super durable.

The forearm is another stout piece of polymer mounting two guide bars that find their way into the main stock. It’s aggressively ribbed, which the ribbing can end up grating your hand a bit, but it’s only really noticeable in cold weather and after shooting more than 100 rounds.

But there’s also a fault you can HEAR with the forearm: it’s a rattle-trap, and this is the biggest complaint associated with the platform. I’ve found no simple solution to this (some say tightening the nuts on either side of the forearm rectify the issue, which didn’t work for me, others have shimmed it with felt). For hunting or tactical applications, less noise is more. It’s the gun’s biggest flaw.

The button which controls the feed. (Photo by Andy C)

The bottom of the Nova’s forearm has a cool feature: a button that stops the feed of the magazine. When the action is released and you pump the forearm, if you depress it, you’ll block the next round in your tube and open the action, allowing you to put in some other round via the ejection port. This interesting feature could really help the shotgun’s versatility shine with practice.

The forearm slides over the four-shot tube magazine and the barrel goes over it and is held in place by the magazine cap. This cap doubles as a tool for pushing out the pins that hold the trigger group in place, making takedown for maintenance a snap.

The barrel is 28 inches long, fully vent-ribbed and threaded for screw-in chokes. You get full, modified and improved cylinder chokes along with cases and a choke tool. The Nova’s barrel is the largest steel component of the gun, with a parkerized finish. Mine has seen a plenty of use in various settings and the finish has held up. The sighting system consists of a silver bead at the middle of the vent rib with a red fiber-optic sight at the end. For something so innocuous, the little bead is surprisingly nice as it provides a better means of confirming a flat sight plane and it pops well against most backgrounds. 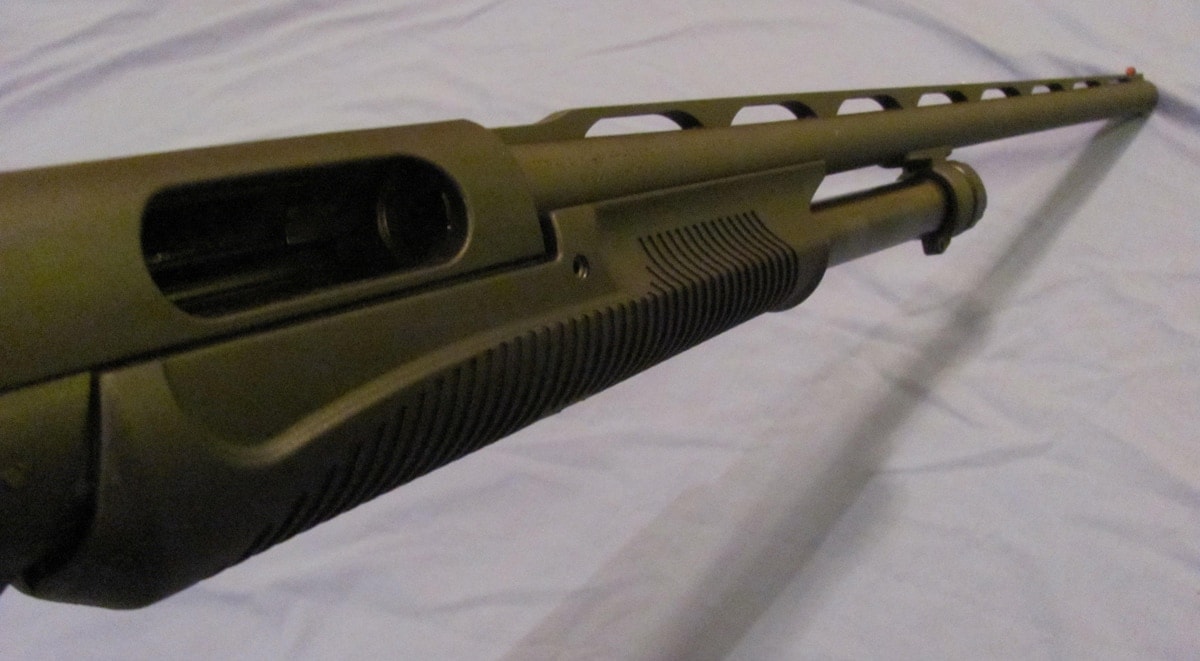 The chamber and all 28-inches of barrel and vent rib. (Photo by Andy C)

Worth noting is the Nova’s unconventional look. In the very traditional world of pump shotguns, this gun stands out. Some think it’s ugly and truthfully, I agree.

Next to a classic Ithaca 37 or even Remington 870 Wingmaster, the Nova looks fat and almost comically retro-futuristic. But the Nova isn’t a gun you buy to look at. I’m all for pretty firearms, but if you need a shotgun that can get knocked around without making your eyes water, this is a perfect candidate.

For the complete package, the gun sells for between $400 and $500 and is commonly available at just about any sporting goods store. My model has the black and parkerized finish but Realtree camo finishes are also available, if that’s your thing.

Top to bottom, that’s the Nova. So how does it shoot?

Reviews on gun performance tend to be subjective, and shotguns may be the worst of all in this sense because traditional “accuracy tests” have too many variables to be especially meaningful.

So I’ll just say my Nova is badass. I’ve never had a misfire or failure to feed, even when being operated at funny angles. When I pump the Nova, I get a new shell. When I pull the trigger, it goes bang. When I’m done, it can be put away filthy and work without issue later. After about 5,000 shells of all types, mechanical performance is perfect and the bore still cleans up to a mirror sheen. 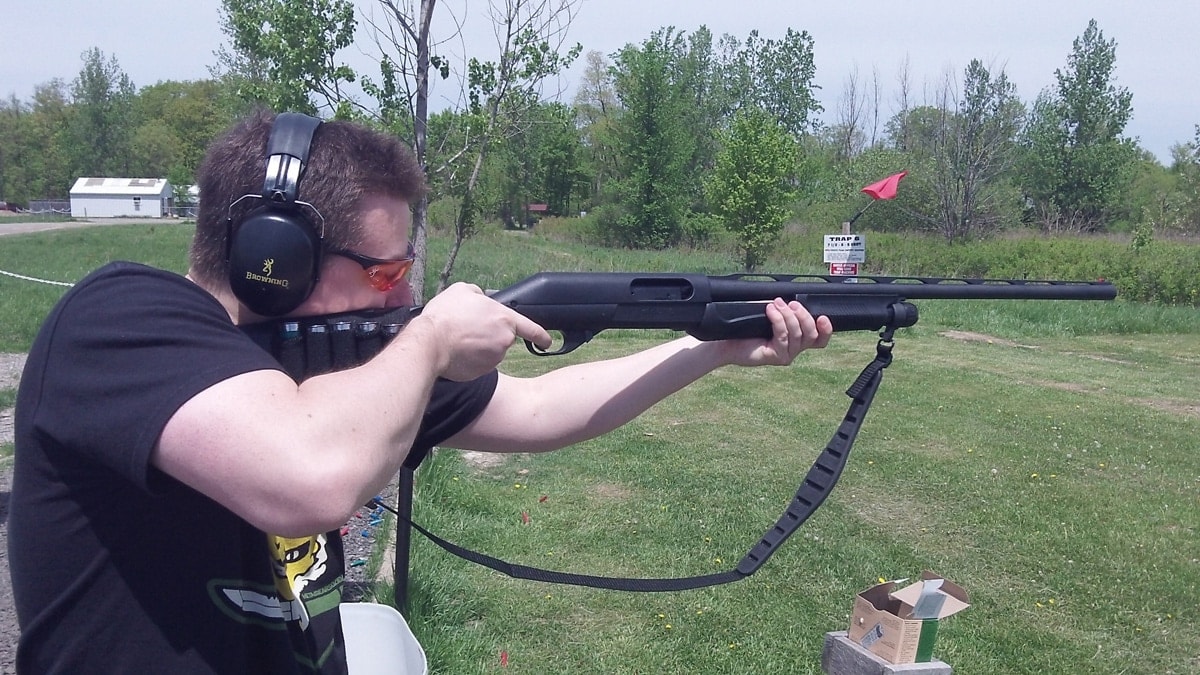 Your humble author accompanied by the Benelli Nova.

The biggest functional issue with the Nova is the trigger. It isn’t hard at about 5 1/2 pounds, but has take-up that ends with a distinct “click” before breaking. When in use, this is no big deal as a consistent trigger press should be happening anyway, but I’ve definitely felt nicer triggers on cheaper shotguns.

Cosmetically, after extensive use there are a few points on the barrel and the action where the finish shows wear with repeated contact and friction. But this is kind of like complaining that your car is getting dirty from driving on a dirt road. I’m not holding the laws of physics against the gun.

In a bubble, the Nova sounds great, but when it’s time to buy there’s tons of options on the rack. Let’s get back to the Nova for new shotgun owners, comparing it to the big dogs on the pump-action yard: the Mossberg 500 and Remington 870. These two guns offer quality, value, reliability and aftermarket support. Comparing these four categories, how does the Nova stack up? 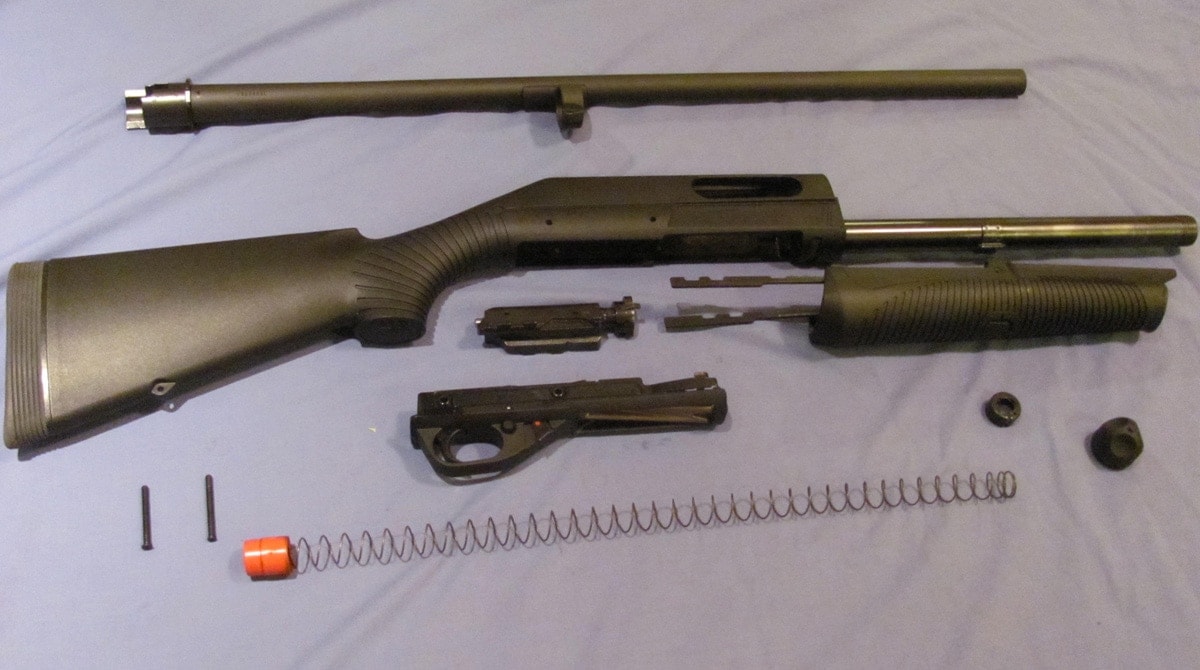 The Benelli Nova exposed for what it is: A great shotgun. (Photo by Andy C)

– Quality – The Nova is sturdy and functional. The synthetic material holds up well to use that can leave traditional wood-and-blued stocks marred. Even if the Nova takes a bump, scratches don’t show up much. The material has tolerated working in the summer heat and winter chill, without the concerns a metallic counterpart may have — particularly rusting following a winter romp. The Nova’s parkerized barrel is less resilient than blued or stainless finishes, though. It doesn’t impact the function of the gun but it’s worth noting that this is one of the few categories where the Nova falls behind its contemporaries.

– Value – At $500 out-of-the-box, the Nova is more expensive than the most economical Mossbergs or Remingtons, but you get what you pay for.

Will my Nova do something an 870 Express can’t? In the strictest sense, no. They both bust clays, kill birds and do shotgun stuff, but I find the Nova’s action is smoother, it feels sturdier, and I prefer the sights and the controls. Additionally, the Nova is the only shotgun I own where I can honestly say it has never had a functional failure. Even if the Nova costs more than some of its competitors, if you like what it offers, it is 100 percent worth the investment. You’re getting a great deal for the money.

– Reliability – I’ve already mentioned my Nova’s perfect success rate in functioning as intended. My Remington 870 and Mossbergs I’ve used, while reliable, can’t hold the same claim with similar round counts. I don’t think any of the three will let you down, but I subjectively give the Nova the nod here.

– Aftermarket Support – It would be ignorant of me to ignore this when discussing the Nova next to its contemporaries that dominate the modifications market. I’ve gushed about the Nova’s excellent quality for the money, but a lot of people buy shotguns with the intent to doll them up.

This is where the Nova lags. With long retail lives and a huge user base, Remingtons and Mossbergs had the time and market share to justify quality add-ons. A field model Remington 870 can be flipped into a tactical shotgun within a half hour and 200 bucks.

The Nova looks lonely by contrast. Fundamentals are available to build a home defense gun from the field model, but it seems Benelli expected the owner to buy a Tactical model and move on. Barrels are hard to come by and expensive (I was offered $350 by an importer). The Nova’s one-piece receiver and stock make customization difficult, and adding something to the frame like ghost rings is a complete do-it-yourself project.

I’ve got a Nova-tactical setup, but it wasn’t economical. Doing this cost double what the equivalent Mossberg 500 project would have cost. Seeing the Mossberg Flex makes this seem laughable.

If you want a malleable “project gun,” forget the Nova. 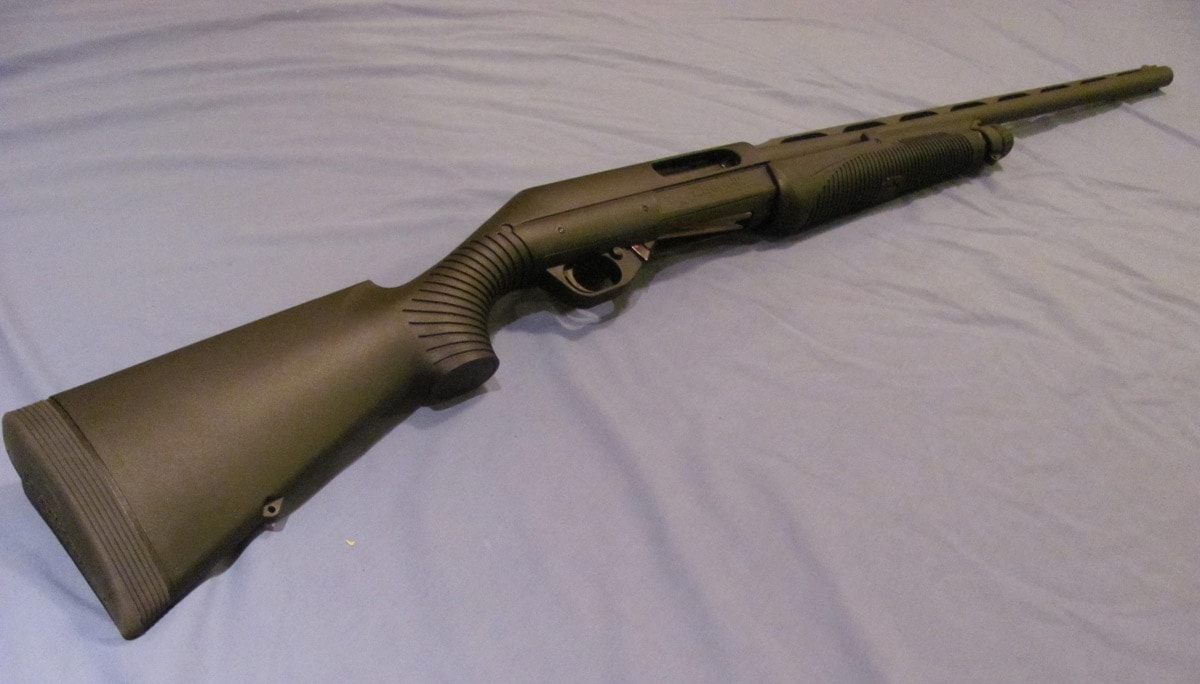 The Nova is a third path in entry-level shotguns. As a base for a dream build, look elsewhere. For the rest of us the Nova has a lot of great things to offer in a reasonably priced package. It’s a rugged, functional gun with nice features out-of-the-box. If that sounds good, I can’t recommend the Nova enough.