I say that right up front because to some people that price will seem absurd for a mass-produced .22 plinker. And they’d be right. If you’re one of those people, you might as well stop reading right now. 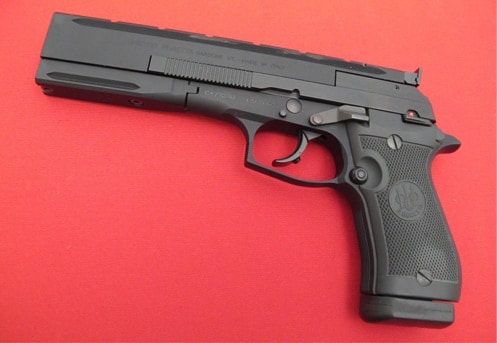 I recently had a chance to shoot a Model 87 Target. It was newer, had very few rounds put through it and was overall impressive.

The Model 87 Target is a full-sized gun that is about 9 inches in overall length and almost 6 inches overall height. It has a 6-inch barrel and weighs about 41 ounces. That last item alone should cue you in on the fact that this is not a plinker – not the kind of gun you want to take into the woods with you for just casual shooting. 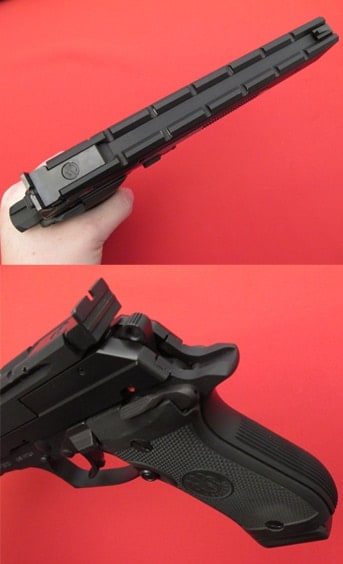 It comes with excellent, adjustable metal sights, but you actually have the option to trade out the front blade sight for a thinner one, which can aid in accuracy when just using the open sights. The rear sight is a simple notch, but fully adjustable for elevation and windage. And one other thing about the standard sights: the sight radius (the distance from the front to the rear sight) is huge, almost 7.5-inches, making it much easier to shoot the gun accurately.

The gun also comes with a Weaver-style rail all along the top of the barrel housing, which makes it perfect for using whatever kind of optic that appeals to you. But this presents a design limitation – the whole housing has to stay put when operating the gun. To allow this, the receiver and slide mechanism operates below the top of the housing, which may strike some shooters as odd at first.

The Model 87 Target we were shooting was fairly new, and hadn’t really been broken-in yet. Even so, the operation was smooth and reliable. So was the trigger, which was fairly light (about 3 pounds) and broke cleanly. While the trigger is adjustable (and we didn’t adjust the one we had), I found the factory setting to have a somewhat longer take-up and reset than I expected.

Overall it was a very nice shooting gun, the sort of gun you could shoot all day with only the effort you put into trying to perfect your technique being noticeable; the gun wouldn’t get in the way at all.

The fit and finish of the gun was excellent, and what you would expect from a higher-end Beretta product. That said, there are reports online that the finish of the barrel housing and the front frame extension and weight mar easier than expected.

The ergonomics of the gun are fine for me. The grip is fairly slim, and feels somewhat like a 1911. And the take-down and cleaning seems to be pretty straight-forward.

The ambidextrous safety, magazine release, et cetera are all where you expect them, and can be engaged with ease. Because of the overall design of the gun, the sights do tend to sit a little high relative to the barrel. In a more powerful caliber, this might present problems with recoil (muzzle flip), but with the .22 is not at all difficult. 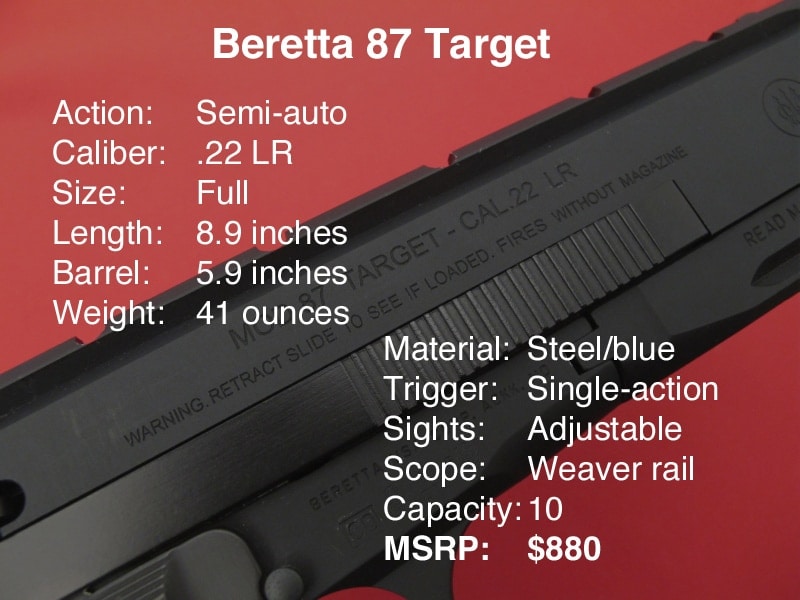 All in all, I think the Model 87 Target is an excellent gun and has been around long enough (about a decade now) to have any minor bugs worked out.

If you’re looking for a serious target gun, this would be an excellent choice at a reasonable price (you can find it online for less than $600 used). If you’re just looking for a solid plinker, this is probably not the best value for your money.