The Beretta 950 Jetfire is meant for deep cover. The Jetfire has always had a minor role, often seen in movies strapped to an ankle or hidden under a sleeve, but that’s where it really shines – it’s a concealed carry, back up gun. The .25-caliber handgun is reliable, has a high capacity and even pretty accurate for being so small.

Beretta has been around, making firearms, just about forever. Generally, they produce excellent guns, but I don’t think that the Beretta 950 Jetfire is one of them. Though I say that with a bit of animosity.

Now, I will admit that this is literally a case of “once bitten, twice shy” since one of the first times I tried shooting a Jetfire it ‘bit’ me in the web of my hand between the thumb and forefinger. OK, that’s my bias out in the open. Now, let’s talk about the gun. 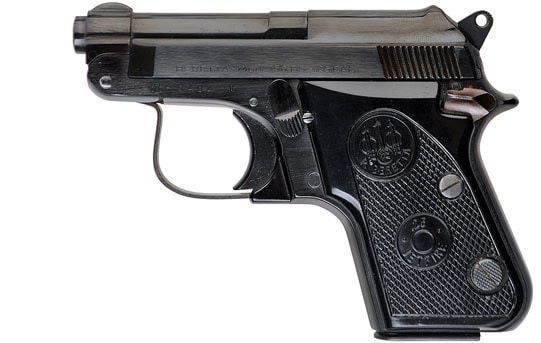 The Beretta 950 Jetfire is an older gun, originally introduced in the 1950s, then with modifications and minor updates kept in production until a few years ago. They can still be found in good used condition all over for well under $200, and there are a fair number of accessories available for the model (including factory magazines still sold on the Beretta website). Most of the ones available are in .25 ACP, though sometimes you will find a “Minx” model, which shoots .22 shorts.

The Jetfire is small – just about 4.5-inches long, about 3.3-inches tall. The barrel and slide assembly presents a very small profile above your hand when you shoot it, and the grip is small enough that some people have a hard time shooting it at all, let alone with any accuracy. I fall firmly into this category, as noted above.

The Jetfire is just too small for my meaty hands, much more so than the Beretta 21A Bobcat, which replaced it. It is solidly made, though still very light, thanks to an alloy frame. Total weight is less than 10 ounces. A lot of people like the Jetfire because it was so very small and light, and is a true pocket gun.

One thing a lot of people like about the Jetfire is the ‘tip-up’ barrel feature. This allows you to load the gun and check that it is loaded, without operating the slide – a feature some people with poor grip strength really like. This makes the gun user-friendly for the elderly and those with some kinds of disability. 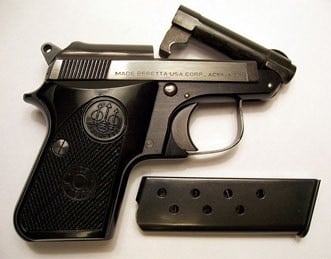 It also allows for clearing a misfire quickly under some circumstances. The tip-up barrel is released with a lever on the left side, and in the event of a misfire the barrel can be flipped up to expel a bad cartridge quickly and easily – so long as the cartridge isn’t jammed in the chamber.

If the cartridge is jammed, then it will be necessary to either pry it out from the back, or to ram a rod down the muzzle in order to dislodge the round. That’s because the design of the pistol means there is no extractor. Rather, the gun operates on a direct blow-back system, where a portion of the expanding gas from firing is used to push the spent case out of the chamber. When this works, it works well, but it can lead to jamming.

This is less of a problem for the centerfire .25 ACP cartridge over a rimfire cartridge like the .22 LR. But it can still be a concern.

Otherwise, the guns are well made with excellent fit and finish, which is something you would expect from Beretta, though nothing fancy.

For those who can actually shoot them, accuracy is fine with these guns, since the design keeps the barrel solidly mounted to the frame in usual operation. The barrel release, the mag release, and the safety all work well on all the different models I have shot. Sights are pretty simple and designed to minimize the risk of snagging.

The .25 ACP is not a particularly good round for self-defense purposes in my mind. But it is a lot better than nothing, particularly when you have nine of them (8+1) available in the Jetfire.

If you do get a Jetfire, and intend on having it for any self-defense duty, be sure you find out what ammo it likes and stay practiced with that. I would recommend only using ball ammunition, not hollow-points. Keep it clean, get a decent holster, and it should serve you well.