If you ever find yourself in a gun store or in a forum and you ask what is the perfect pocket pistol? you’ll get a variety of answers.

People will spout out exact brands and models, or start matching designs with use. But just about all the answers include something with a three-inch barrel, a rather comfortable short grip, and chambered for either .380 or 9mm—mostly 9mm.

And two frontrunners fitting that basic description are the Beretta Nano and the Ruger LC9. Actually, they do more than just fit the description. Right now they are the quintessential pocket pistols in terms of brand, design and price.

I’m a big fan of both guns and recently I had them in my possession to review, so I felt it was my duty as a gun writer to compare the two. 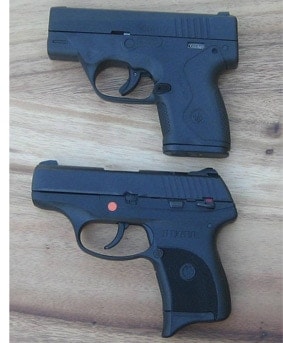 If you’re not familiar with either gun, allow me to explain. They were both released this year and had received rave reviews. The Ruger LC9 is part of Ruger’s Lightweight Compact line that stems from the LCP. And the Nano is a new concept of Beretta’s and was introduced late this year.

Both of these pistols are small but they aren’t tiny. The LC9 feels a bit smaller than the Nano, if only because it is streamlined. The Nano is more angular.

The LC9 has a polymer frame that’s light, but the slide to frame fit is a bit loose. It tends to rattle. Whereas the Beretta Nano is as solid as a tight 1911. Its polymer exterior has a stainless steel frame insert. The gun has more mass—and that mass seems to be machined to tighter tolerances.

While I love the feel of the Nano, I like the magazine extension on the LC9. It gives the Ruger that much more to hold onto. While it is also more to conceal, the pinky extension is just common sense, and if you don’t like it, it is removable.

The Nano’s most unique feature is its slide release because there is no external button. You operate the slide by pulling back and letting it fall. Though it takes some getting used to, it works quite well. It is rugged and dependable for quick reloads.

The LC9 has a more traditional design with a slide release button. Granted you can operate the LC9 similarly to the Nano, but it still has two options as to how to do it. Beretta has eliminated one of those steps, so it’s even more dummy proof.

The safety features of these guns are different as well. There is no exterior safety on the Nano—though it does have a trigger safety like on a Glock. The LC9 has a traditional manual safety. Both have internal safety mechanisms, but the Nano can fire with or without the magazine while the LC9 has to have a magazine seated.

Although both guns will go bang when you pull the trigger, the Nano has a simpler design.

How do they shoot?

Both guns are accurate. Their sights are practical. I had no trouble making shots with either. At close distances, I can get good groups. I can keep the shots in an eight-inch circle from as far out as 25 yards, but the power of the 9mm rounds in such a small gun makes both pistols jumpy.

The Nano handles the jumps with a bit more grace. I think part of the reason I like the way that the Nano handles is that it is built like a hammerhead. It pushes back while the LC9 seems to push up.

And I did just as well with the Nano, despite the lack of a pinky extension. Go figure. However, I’ve got to go with the Nano.

Clearly there are other choices in this niche market. If cost is no consideration, I might add the Kimber Solo into the mix. There are other companies, too, like Kel-Tec and Kahr, that bear mentioning.

For me the choice comes down to two factors. Features and cost. On the available features, I like the Nano. I want to gun to work without the magazine—just in case.  On the cost side, Ruger wins—at least for now.