Bersa Firestorm .380 Review: Not top-of-the-line, but hard to pass up

Bersa is an Argentine firearms company that isn’t hugely known in the U.S., which is a bit of a shame because generally the Bersa handguns I have handled were quite nice and very good bargains.

The Bersa Firestorm .380 ACP is no exception to this. 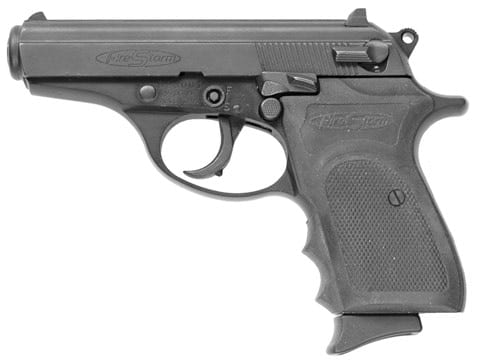 In this review I will also reference the Bersa Thunder as well as the Firestorm because the two are pretty much the same gun. The Firestorm model is actually assembled in the U.S. with Argentine parts, and, in the end, has only a couple of very minor differences.

Since the Firestorm is the version I have shot more recently while testing its ballistics for BallisticsByTheInch.com, it is the basis for this review, but I think most everything I have to say would be applicable to the Thunder version as well.

Where it got its good looks

The Firestorm is a direct blowback, medium-sized .380 built on the Walther PPK design. A design, I might add, that has proven itself to be dependable time and time again for more than 80 years.

Overall the Firestorm is a well-made little gun and manufactured with quality materials. The frame is an aluminum alloy, which contributes to the lighter weight (just 20 ounces), but also proves to be strong and durable. The slide and other components are made from high quality steel. For costing, at most, $300, these guns are durable. There have been reports of Bersas lasting 50,000 rounds before having problems.

The gun features a fixed barrel (mounted to the frame) that helps give it stability and accuracy. The beavertail on the back of the grip is a little longer than on the original PPK design, which helps keep large hands from getting ‘bitten’ by the operation of the slide/hammer (something I very much appreciate). And there is a finger extension on the magazine that also allows for better control—a design tweak introduced on the PPK about 40 years ago.

Fit and finish for the Firestorm is likewise good. It’s not the same quality that you’ll see on high-end firearms, but it isn’t bad at all.

The Firestorm has an exposed hammer and de-cocker, which is, again, similar to the PPK. The long double-action pull on the trigger for the first shot is followed by a crisp shorter single-action pull for subsequent shots.

I’ve found the triggers on all the Bersa guns to be decent or better—the Firestorm I would describe as “good”, but without the roughness you might find typical of lesser-priced firearms. 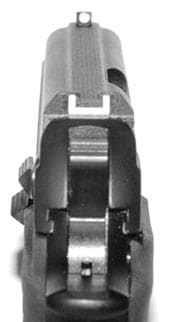 Differences between Firestorm and Thunder

The Firestorm has a front-dot sight and a rear notched sight, which is outlined in white. This is one of the minor differences between the Firestorm and the Thunder versions: the Thunder has a three-dot sight.

Another minor difference is that the Firestorm comes with a rubber wrap-around grip with finger indents, whereas the Thunder has traditional side panel grips with a grooved backstrap and smooth front.

A lot of people consider the Firestorm/Thunder to be a “pocket pistol.” I tend not to. With the finger grip extension and 20-ounce weight, I think they are a little too big for that use.

In this day and age with a variety of ‘micro .380s’, there are probably better choices for use as a pocket gun. But that is not to say that the Firestorm or Thunder is too large for concealed-carry duty. Hardly. It would disappear into a belt holster or into a shoulder rig (the way the PPK it was modeled on did for James Bond). And personally, I like the slightly larger size and weight to control recoil and increase accuracy. I consider this gun to be a very good choice for self-defense use. Yes, even though it is chambered for the .380 ACP, which is adequate with the correct ammunition.

Bottom line, if you get a chance, take a look at the Bersa guns, particularly the Firestorm or Thunder. They are well made, the company stands behind their product (for life for the original owner) and while the fit and finish may not be top-of-the-line, neither is the price. It is a very good value firearm.