Gun Review: the Bersa Thunder 380 CC will never go out of style!

In a world that seems increasingly dangerous and more worrisome with each passing day, many law-abiding firearms owners are choosing to conceal and carry a firearm for their protection and the protection of their families, homes and places of business.

While there are already plenty of options for concealed carry firearms on the current market, companies already experiencing an increase in sales due to the current political climate willing to create new firearm designs or tweak existing designs to better suit the specific wants and needs of the concealed carry market are finding themselves with hit products.

Companies from Ruger and Kimber to SIG Sauer, Smith & Wesson and Colt have released new concealed-carry firearms or compact versions of existing models intended to better serve the concealed carry market, or in many cases, both. 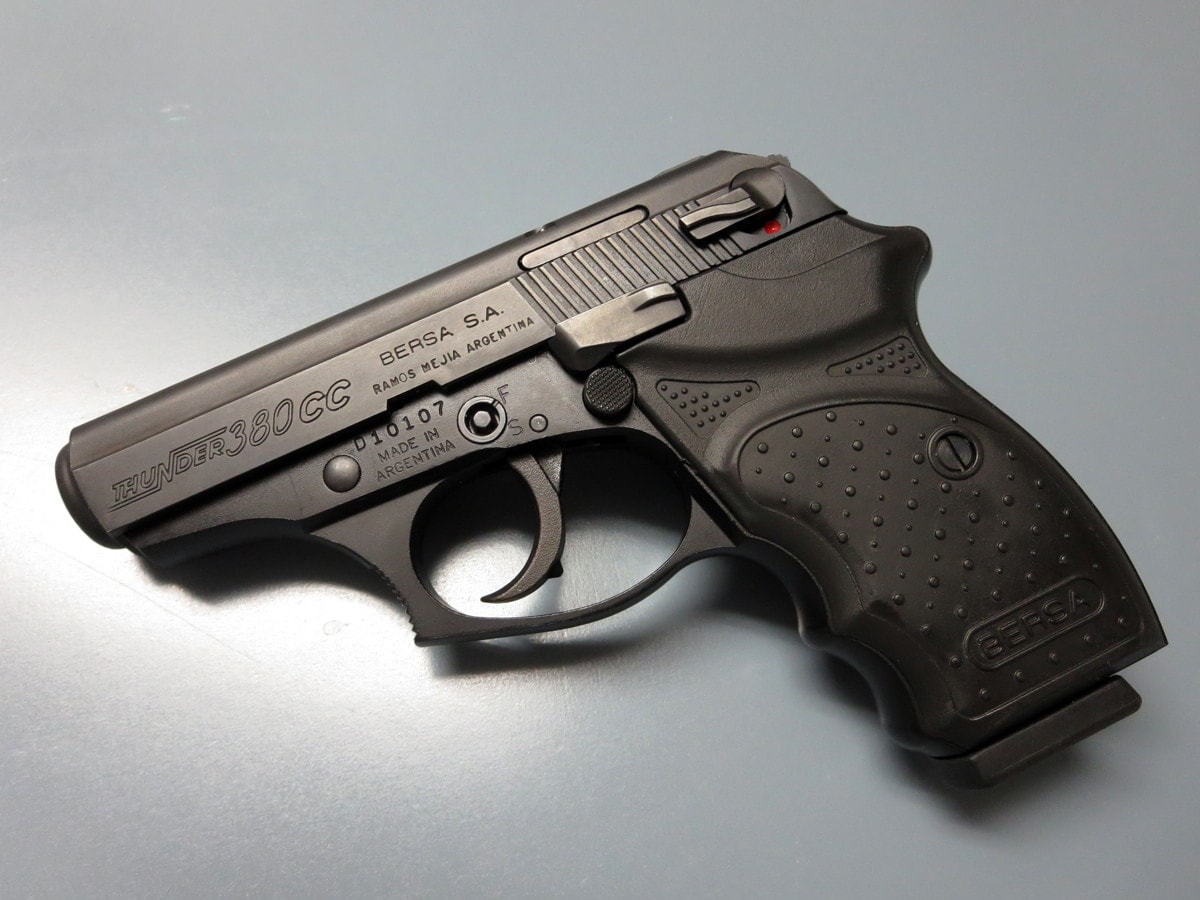 Small, light, accurate and reliable, the Bersa Thunder 380 CC is an excellent choice for concealed carry that may not receive the recognition or attention of models produced by larger companies, but which is certainly worth a look.

Manufactured in Argentina by Bersa and distributed in the United States by Eagle Imports, the Bersa Thunder 380, a Walther PPK-lookalike, has been a top seller for Bersa for several years. A firearms manufacturer in Argentina since 1958, Bersa has supplied the Argentine military with handguns. While not as well known as many of the larger firearms manufacturers willing to spend big money on marketing and advertising, Bersa’s firearms have sold steadily thanks to their affordable retail prices.

Already a success for many years for the company, Bersa’s Thunder 380 has recently spawned a little family of firearms sharing its name but altered by the company to more specifically target various segments of the market. These include the Thunder 380 Plus, with a double-stacked magazine, the Combat, with olive wrap-around grips and alterations to the slide, the Thunder 22 chambered in .22 LR and the 380 CC, specifically directed at the concealed carry market.

Available in black or a duo-tone silver with black, the Bersa Thunder 380 CC is constructed from alloy with a steel slide to ensure strength while reducing weight. While not as light as many handguns with polymer frames, the Thunder 380 CC isn’t exactly a brick at 1 pound, 4.1 ounces loaded and ready to fire.

Slimmed down for concealed carry, the Thunder 380 CC features a 3-inch barrel, non-adjustable, extremely low-profile sights unlikely to hang up on a pocket or holster, a slim slide release, an ergonomic grip frame with finger grooves and an almost bobbed hammer to reduce snags while drawing, unique within the Thunder line. 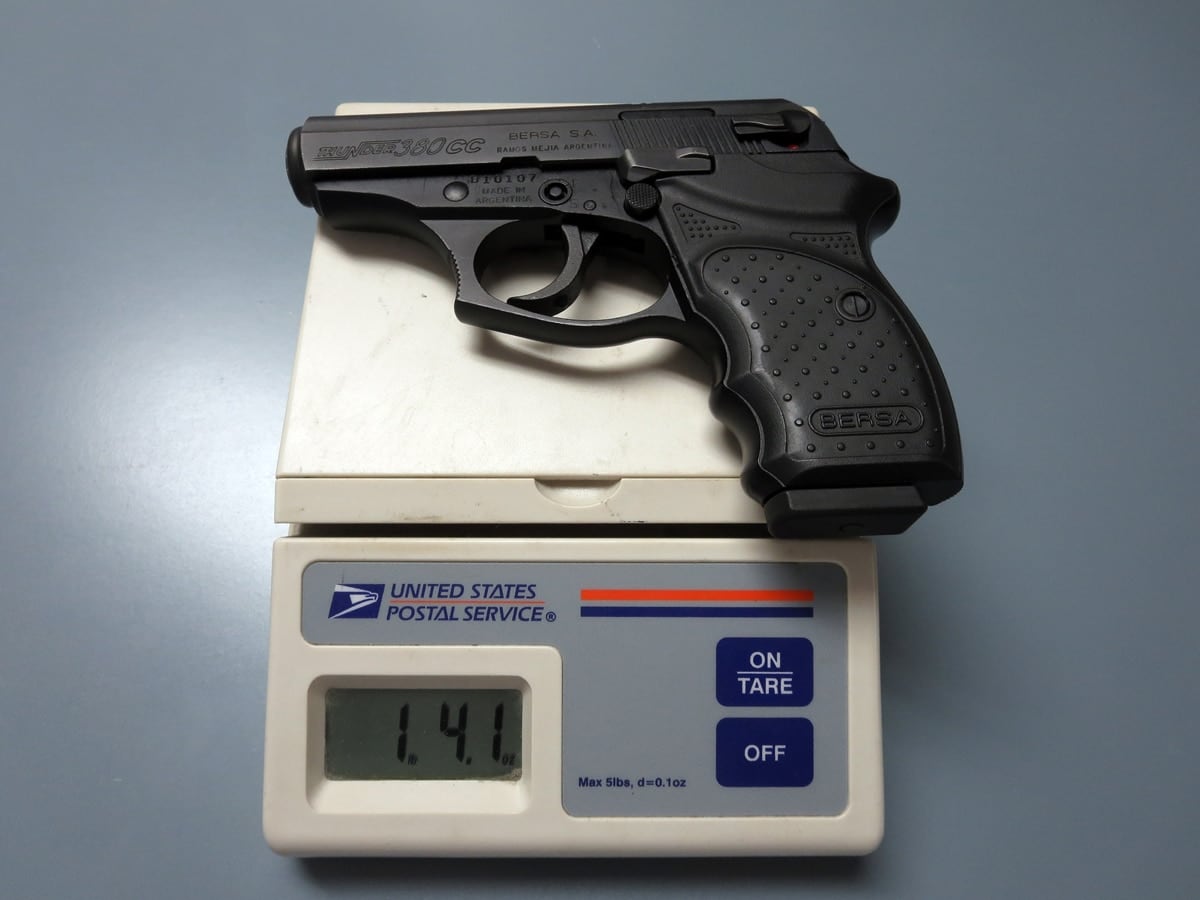 Unlike other models in the Thunder lineup, the magazine included with the 380 CC includes a flat floor plate and is not interchangeable with other, both lower and higher capacity magazines in the Thunder family. A loaded chamber indicator is standard, as is a de-cocking lever. Holding eight rounds of .380 ammo with another in the chamber, the Thunder 380 CC may not fire the most powerful cartridge known to man, but it brings more ammunition to the fight than small revolvers and is more controllable and comfortable than other small handguns firing larger cartridges.

A double/single action firearm, the Bersa Thunder 380 CC gets into the action with a long, but by no means gritty or stiff, double-action pull. Subsequent shots are easily made and easily kept where they need to go thanks to a short and relatively crisp single-action break.

Perhaps the greatest surprise when initially shooting the 380 CC was its accuracy. Obviously intended for close-range personal protection, the Thunder 380 CC does not offer the larger, more useful front and rear sights standard on other models within the Thunder lineup, opting instead for extremely low profile, more snag-resistant front and rear sights that might seem more at home on a revolver. While small, smooth and certainly low, they are picked up well by the eye, especially after some practice drawing and aiming the weapon, and enable shooters to keep the holes they punch in paper very close together, especially at 7 to 10 yards.

After some practice, groups fired at targets from 7 to 10 yards distance were easily kept to fist-size and smaller, with slower, more carefully aimed groups at closer ranges making ragged holes rather than a group. In-short, the Bersa Thunder 380 CC delivers impressive accuracy for a pistol ostensibly intended for close-range, emergency self-defense. 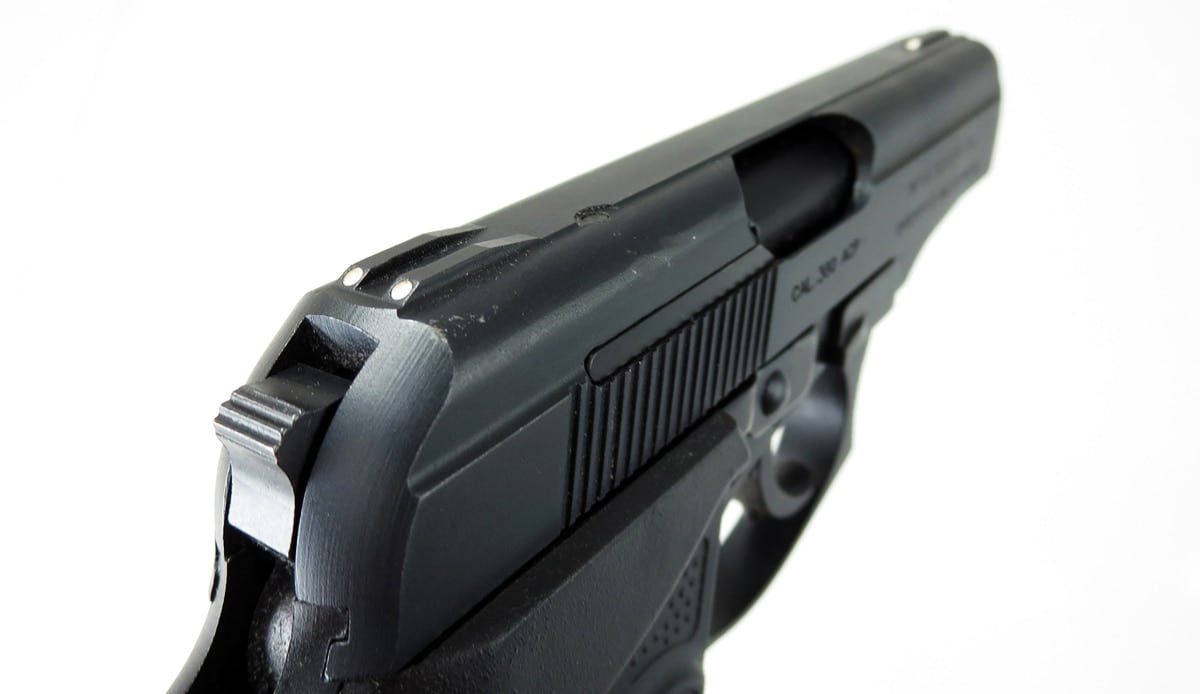 Ugh! Look at those sights. Hard to keep your eyes off them. (Photo by Joshua D. Silverman)

Recoil while shooting the Bersa Thunder 380 CC was practically non-existent thanks in no small part to the firearm’s all-metal construction and its .380 chambering. This is significant, as it makes regular practice, critical for a firearm to which the user will entrust his or her life, enjoyable rather than a chore resulting in sore hands.

Also impressive when shooting the 380 CC was its utter lack of malfunctions for a small, inexpensive pistol. While a break-in period and the usual hiccups, feeding and ejecting issues, and the search for a suitable ammunition brand were fully expected with the little Bersa, it digested every brand and type of .380 ammunition stuffed into its magazine. While certainly this experience may vary from owner to owner and ammunition brand and type to another, during testing of the 380 CC, not one single failure of any kind, from a stove-pipe to a hard primer or failure to feed, was recorded.

As for the “CC” part of the Bersa Thunder 380 CC, concealing and carrying the little Argentinian is simple. In the winter or in cooler climates, so long as the owner doesn’t simply walk around with it in his or her hands, it is unlikely anyone will ever know the Bersa is under a coat, jacket or sweatshirt.

Off the range, in the real world

Tested in the hot, humid summer months in Virginia, even carry in the pocket of a pair of mesh shorts is possible, though a little clunky and not exactly ideal. In a pocket of a pair of cargo shorts, however, no problems were encountered, other than where the phone and keys were supposed to go. Carried inside the waistband on the right hip, under nothing more than a baggy t-shirt, the Bersa Thunder 380 CC simply disappears when used with even the most inexpensive IWB holsters available from the local outdoor store. Those who take the time to do a little research and dig up a nicer, more feature-rich holster allowing for tucked-in IWB carry, even formal attire may be worn comfortably with the Bersa along for the ride. In a vehicle, the Thunder 380 CC tucks easily into practically any cubby or storage bin in any modern car, allowing accessible yet convenient concealed vehicle carry.

Simple to strip thanks to a disassembly lever on the right side of the pistol’s frame above the trigger guard, breaking the Bersa Thunder 380 CC down into its primary components for cleaning, lubrication and maintenance requires little more than a few moments. After ensuring the pistol is not loaded, locking the slide in the rearward position and pushing the lever downwards, then pulling the slide rearward before lifting it up and forward, off the fixed barrel and frame are all that is necessary to break the pistol down. After a thorough cleaning, a few drops of oil are all that is required to keep the Thunder 380 CC banging reliably. 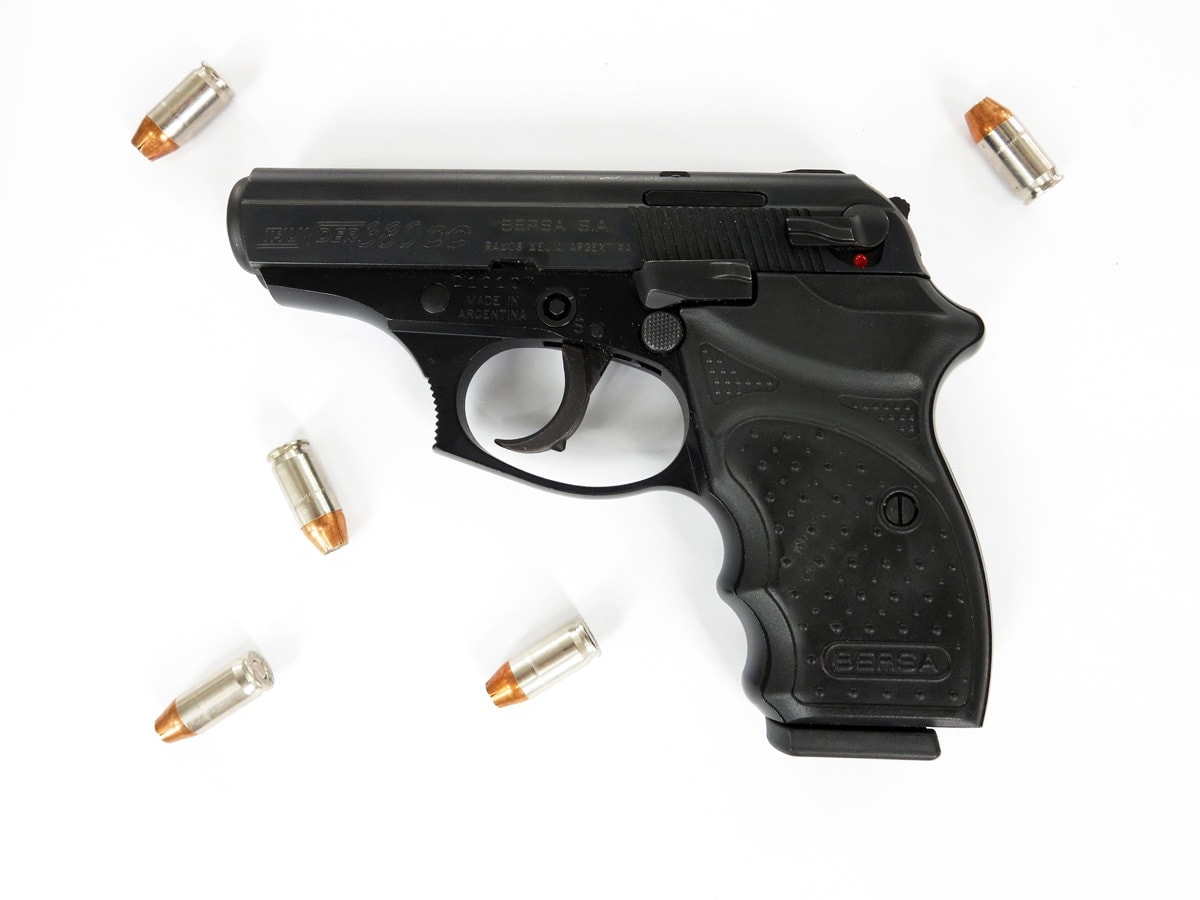 Small, light, accurate, reliable, affordable and easy to maintain, the Bersa Thunder 380 CC is an excellent concealed carry pistol in a rapidly growing world of impressive concealed carry firearms.  Though neither futuristic nor terribly high-tech in a time of 21st century designs, polymer construction and advertising hype, reliability, accuracy, ease of maintenance and affordability never go out of style.

At an average going rate of approximately $300, anyone on a budget but serious about concealing and carrying a firearm, or anyone who likes a good, reliable and affordable small pistol should add the Bersa Thunder 380 CC to their short list.