Bersa has always been high up on our list of affordable handguns that don’t fail to impress in action.  They may not prioritize finish but the fit and function of Bersa’s hanguns is always first.  Best known for their Walther-inspired .380 ACP concealed-carry pistols and their .22 Long Rifle counterparts, Bersa also makes a solid full-size centerfire handgun. 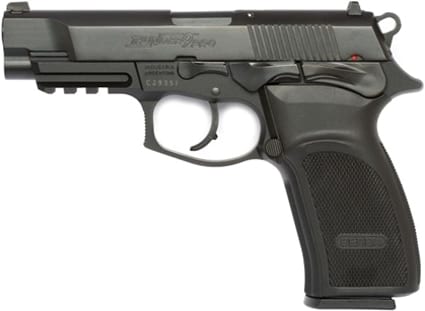 The Bersa Thunder Pro is their main full-size handgun.  A solid pistol that draws equally from Walther and Beretta designs, the Thunder Pro is a comfortable shooter with good ergonomics reminiscent of modern Browning Hi-Powers.  It also offers good capacity at 17+1 rounds in 9mm Parabellum and 13+1 in .40 S&W.

The Thunder Pro features a lightweight alloy frame that brings the unloaded weight down to just 30 ounces unloaded, even with its 4.25-inch barrel.  The Thunder Pro is 7.5 inches long by 5.5 inches tall and 1.45 inches wide.  The slightly above-average width is a result of a fully-ambidextrous safety and slide stop.  The magazine catch is also extended and reversible for southpaws. 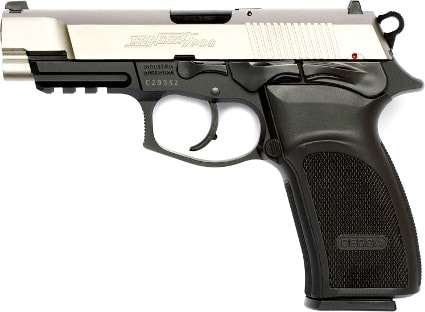 And you can run them fast.  Bersa Thunders are known to those who have shot them to have good triggers, light and snappy in single-action and the double action is very smooth and doesn’t stage.  There is a slight amount of takeup but less than you’d expect from most service pistols, let alone any handgun that costs this little.

Bersas are used in shooting competitions internationally including IPSC and are the standard duty pistol with most of Argentina’s military and armed forces.  They’re tough guns.  We’re not saying they don’t fail, but if they can go 50,000 rounds before they break, well that’s a general plus in our book.  If that’s not enough for you, you can watch this video where 1,500 rounds is fired in a single session, without a single failure.  When the gun gets too hot they give it the bucket treatment.

If you’re impressed with the Thunder Pro but are interested in something a little smaller, they also make the Thunder Ultra Compact Pro.  These duty pistols weigh in at just 23 ounces unloaded, have 3.25-inch barrels, are 6.5 inches long and 4.75 inches tall.  The 9mm Ultra Compact Pro has a 13+1-round capacity and the .40 10+1.  They also have a slightly-heavier 27-ounce .45 ACP compact with a 3.6-inch barrel and a capacity of 7+1. 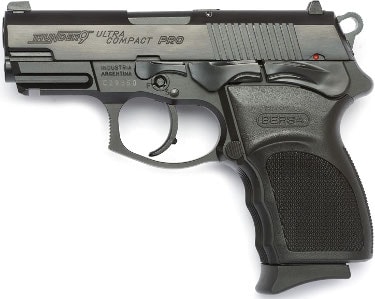 Bersa Thunder Pros cost a little more than their .380s and rimfires, but are still a great deal starting around $400.  The only shortcoming of these guns is a limited aftermarket.  But but holsters out there and for those of you who want a little tritium or fiber optic in your sights, Thunder Pros use standard SIG front and rear sights (#6 front, #8 rear or P226).

Once again Bersa proves to manufacture excellent low-cost firearms that don’t give up an inch in the function department.  And that is the hallmark of a great bargain.