Hearing impaired shooters seem to be a staple at every shooting club due to years of blasting away sans the appropriate protection.  With electronic muffs now priced for every budget and application, there is no excuse not to don the headwear that at once blocks the dangerous decibels and allows for normal conversation.

What, why, and how of electronic muffs

Simple disposable earplugs generally do not block enough sound, especially when shooting the big guns.  Regular passive muffs work, but they block out all sound and I find myself continually taking them off to be able to hear things like range commands, conversations and scores called out on the firing line.

Price differences in muffs generally dictate quality of components and advanced capabilities.  For instance, lower cost muffs may have only one or two microphones and a basic stop-type amplifier that simply shuts off upon high decibel sounds.  This type of shutoff causes split second time lapses before the amplifier resumes and low tones are again transmitted to the ear.  Cheaper muffs with fewer mics often make it difficult to ascertain the direction of the sounds as well.  Higher end models use more advanced technology that allows the continuous flow of low volume sounds while at once blocking dangerous noises.  They also contain multiple mics and speakers, making it easy to determine the direction and distance of the sound, which is crucial in hunting, tactical and competition applications. 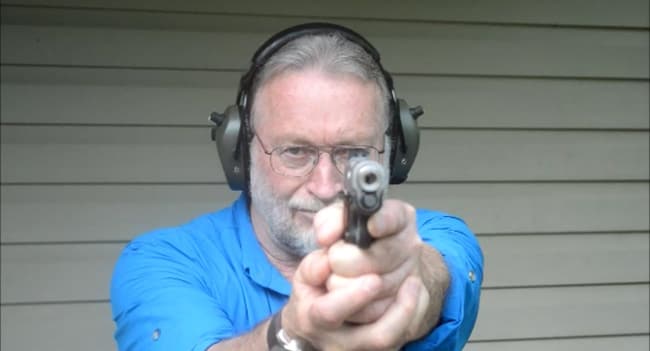 Remember when shooting indoors, it is often best to double up on hearing protection, with plugs under muffs, especially when shooting the big guns.  And if you are worried about dead batteries, most electronic muffs strive for a battery life of around 500 hours.

While the saying remains true that buyers get what they pay for, shooters have different needs when it comes to hearing protection.  Some of the higher end muffs provide features — like auto shutoff or auxiliary jacks — that may not justify cost for casual shooters. 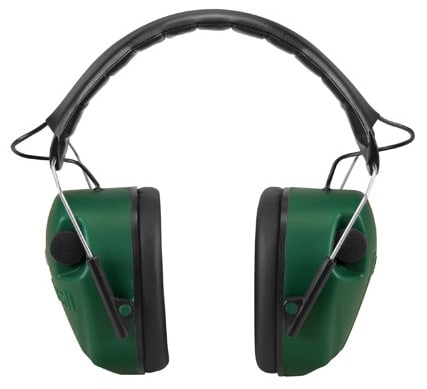 The Caldwell EMax brand is the electronic muff that I’ve seen the most shooters wearing around the range because they are just plain affordable and available.  They come in both standard and low profile, with NRR’s of 25 and 23 respectively.

Though there is a split second gap of shut off time following a shot and the sound quality is merely average, they work just fine for casual shooters.

Caldwell provides color choices of dark green, pink, or camo.  Though they retail around $35 to $40 depending on profile and color, EMax’s are available online for $25, but do not include with the necessary pair of AAA batteries.

The low profile Impact Sport muffs carry a decent NRR rating of 22.  In spite of a lower price point, these have multiple directionally placed microphones and an auxiliary jack for MP3 players and the like, in case you were wearing them on the lawnmower, for instance. They have a long runtime on two included AAA batteries. Soft, snap in ear cushions are easily cleaned or replaced as needed. 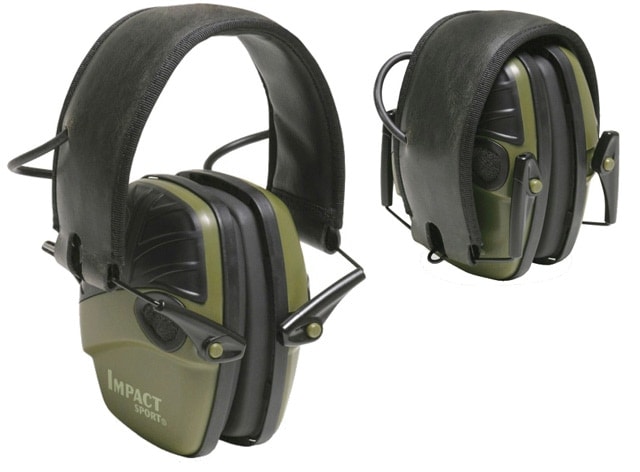 Though they are only available in olive drab, of all the muffs I’ve tried, this one cannot be beat at its price range.  In fact, I would rather have these Howard Leights than some higher dollar muffs not mentioned here.

They sell at online retailers like Bass Pro for $59.99.  Unlike the Impact Sport, the Impact Pro model is large profile and costs $20 to $30 more, but provides an NRR of 30 with all the same features of the aforementioned Sport version. 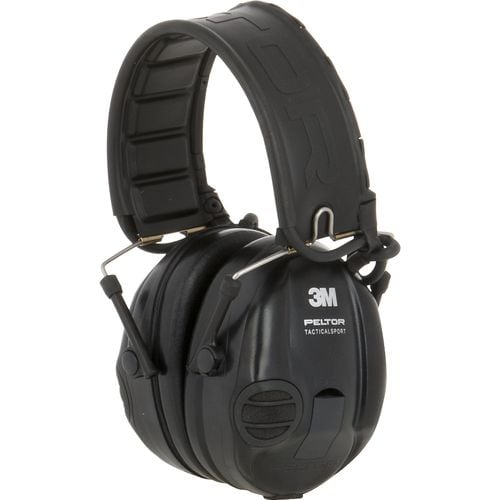 The Tactical Sport’s NRR of 20 is a little low, but they have higher end models as well. The audio jack allows connectivity with cell phones and MP3 players.  These Peltors, which are marketed under their military line, automatically shut off after 2 hours, which saves on the two AAA batteries. Their ambient sound clarity is very natural.

They can be had in either orange or black, and are quite comfortable, although the have a slightly larger profile than other brands.  Amazon.com carries Peltor Tactical Sports for just under $100.

The sound quality of Pro Ears Gold is superior to most other muffs and each ear cup can be adjusted separately.  They have a strong NRR of 28, come with a five-year warranty and are made in the USA. 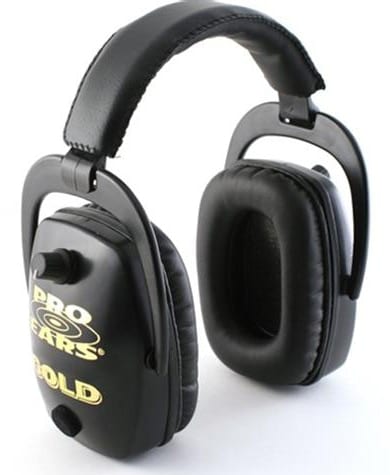 The Slim Gold line is narrow enough not to clunk around on guns and is comfortable for all-day wear.  Like many other Pro Ears models, these come with the 3.5mm mini jack, allowing connectivity with outside devices like iPods, scanners and radios.  If style is an object, these bad boys are available in camo, white, pink, black, or green. They use either “N” or 123 lithium batteries, and the auto shut off feature has definitely saved me some batteries.

While they retail for $339 on the Pro Ears website they can be found at multiple online retailers for fewer than three bills.  Pro Ears has a very extensive line of electronic muffs to fit all applications and is highly regarded in the shooting world.

Another option for those with an open budget and distaste for muffs is the Pro Ears Pro Fit custom inside-the-ear plugs.

Once hearing is lost, bid it adieu.  So if you have not already, get yourself some electronic muffs.  While I sure love a long day of banging away on the range, I still want to enjoy the sound of a whitetail crunching through the leaves behind my bow stand with my bare ears.  I’m willing to shell out a few dollars on electronic muffs today so that I don’t need some kind of hearing aids to enjoy that hunt tomorrow.