Bushnell has been putting scopes on top of hunting guns for more than 70 years, but recently the company went through a minor overhaul and discontinued many old standby models and replaced them with three new product lines. Ranking them in order of price and features, the new lines include the Prime, Nitro, and Forge optics.

With the new options, “we’ve focused on creating the best performance in terms of contrast and resolution. They will outperform the competition and are built on a promise to surpass our customers’ expectations,” said Jacob Edson, Bushnell communications manager.

Of the three options, the Nitro optic is Bushnell’s middle-of-the-road option. It features the widest range of optical configurations such as 30mm tubes, FFP and SFP options, ED Prime glass, and the same EXO coating found in other lines. There are 30 riflescope options with prices ranging from $299 to $649. 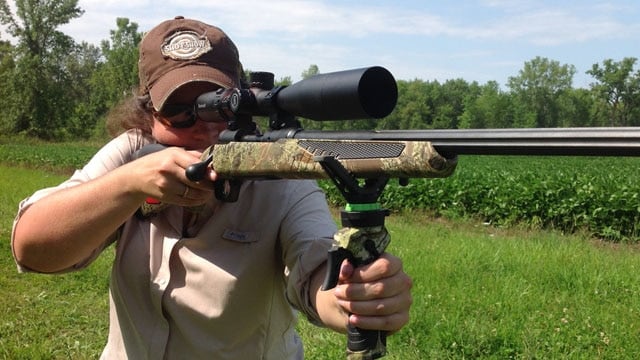 Branding on the Nitro is simple and understated, exactly what hunter’s desire in the field.  (Photo: Kristin Alberts/Guns.com) 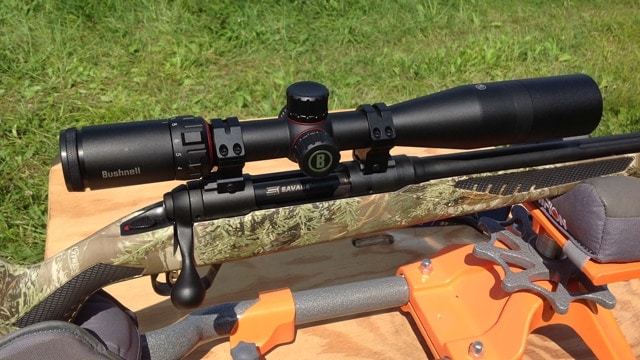 We mounted our Nitro in a set of Weaver Skeleton high rings to accommodate the 44mm bell.  Savage’s 110 Predator rifle came with a set of Weaver bases already installed. (Photo: Kristin Alberts/Guns.com)

The test Nitro was a 4-12×44 first focal plane scope with the company’s Deploy MIL reticle, which can best be described as a cross between a hunting BDC and a more tactical Christmas-tree-style center. It’s not a lightweight optic at 24.2 ounces, but it is a workhorse with 3.9-inches of eye relief.

The 30mm tube is quickly becoming the new standard for superior light transmission. By the company’s own measurements for lowlight or dim conditions, light transmission on the Nitro is 93 percent whereas the Prime comes in at 92 percent and Forge at 94 percent. Since we tested in the early morning, we learned the Nitro works well in low-light conditions, so spotting and shooting sneaky varmints like prairie dogs or coyotes should be a snap.

Although it isn’t visible, the EXO Barrier over the glass stands out as nice feature. The coating over the glass sheers off water for greater clarity in wet conditions. Edson explained the EXO Barrier bonds with the lens on a molecular level and fills microscopic pores in the glass. “It is, quite simply, the best protective lens coating technology Bushnell has ever developed,” he said, adding the protective layer will repel oil, dust and debris in addition to water. 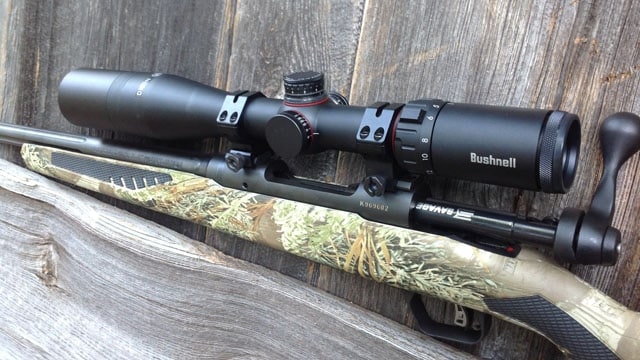 The Bushnell Nitro we tested here is an unassuming matte black finish, though the company is offering an attractive earth-toned bronze finish as well.  (Photo: Kristin Alberts/Guns.com)

We mounted the Nitro 4-12×44 on the Vista parent company’s brand Savage Model 110 Predator AccuFit rifle chambered in .223. On paper, that makes a formidable combination to hunt both prairie dogs and coyotes. After plenty of range time, it was indeed a ready and capable combination. We shot sub MOA at 100 yards, with the best three-shot group at only 0.49 inches and 200 yard targets holding right at MOA with premium ammo. The side parallax made adjusting the scope in the shooting position easier.

Suffice it to say we’re not ready to part with the Nitro and Savage combo – it just plain performs and shoots! With clarity, reticle and magnification options, side parallax adjustment, and focal plan choices to match most any shooter’s scenario, the Nitro scope is all we hoped it would be.