Book Review: 365 Guns You Must Shoot by T.J. Mullin 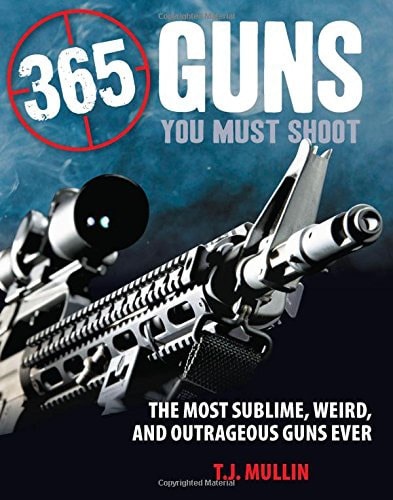 Indeed, the physical quality of 365 Guns is exceptional, with heavy, semi-gloss pages featuring a mix of quality original photography—including photos of the author himself shooting the guns—alongside historical photographs placing the weapons in context.  The book’s cover price of $22.99 can be therefore be justified by what you get in its 320 pages from Zenith Press before even opening.

Moving past its polished presentation, we find a book written by an author with knowledge of his subject.  The best part about the book, making it a legitimate must-read, must-shoot, is the fact that author T.J. Mullin has shot every single one of these guns over his long and esteemed career as a gun writer, historian, and military man—all alongside his profession as a lawyer.  The brief writeup on each gun is clean and concise, paying particular interest to accuracy, follow up shots, ease of reloading, and trigger pull.  Clearly, the author is a tactical man with extensive combat training who can speak intelligently about some very serious weapons.

I place the utmost importance upon knowing history, and find great value in what firearms can tell us about that history, both military and civilian.  While Mullin’s may be geared toward more military and tactical weapons, it really is a must-read for all gun lovers.  Though the majority of us civilians will never have the chance to shoot many of the weapons in 365 Guns—take the Bren Gun, Lewis light machine gun, or SMG, as examples—it is nonetheless interesting to recognize them and how they fit into the historical context of firearms.  All told, Mullin covers guns from over 30 countries, and they are neatly organized by country. 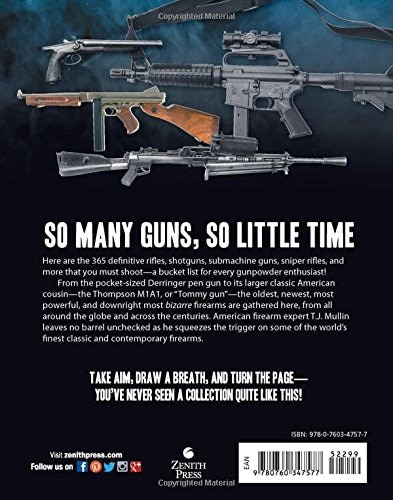 Machine guns aside, sure there are some oddities—take Ithaca’s Auto Burglar or the M3 Grease Gun.  I found however that the majority of the guns are not weird, outrageous or sublime as noted by the book’s subtitle.  Rather, they are the military and civilian weapons that have defined both wartime and civilian target and tactical shooters.  Though I went into this expecting to begin checking off a list of 365 guns I must shoot, what I found was roughly half guns I could shoot and another half that I’d likely never have the opportunity to fire due to rarity, configuration as full-auto, and so on.  That said, I still found 365 Guns a very worthwhile publication, though a different title and catchphrase could have better and more fairly defined its audience.

Because my area of interest lies more with sporting shotguns, hunting rifles and the like, I definitely found omissions in the book. That was, however, the author’s intent, as outlined in his Introduction: “I have mainly included weapons that are military, law enforcement, or self defense oriented, as that is my field of interest.”  No doubt, he’d find much more glaring omissions in my gun-a-day choices, and I credit him fully for knowing and honestly exploring the areas of his passions.

Whether or not you agree with these particular 365 guns in a must-shoot book, it’s always interesting to page through and see where you agree and digress, as well as learning something new.  While this book focuses on a certain tactical and military segment firearms and not an overall picture, if you know what you’re buying, you won’t be disappointed by author’s knowledge and publication quality.  And it begs the question, if you were listing a gun to shoot every day of the year, what would they be?