Book Review: Grossman’s ‘On Killing’ and ‘On Combat’

Two oft-quoted works in the military, law enforcement, and increasingly, civilian self-defense world are On Killing and On Combat, both by Lt. Col. David L. Grossman.  On Killing celebrated its 20th anniversary of publication in 2015, but the many lessons from this Pulitzer Prize-nominated work couldn’t be more current had it been published yesterday.  Indeed, it was updated in 2009 to include observations on 21st Century issues. On Combat, (3rd Ed. 2008) brought the lessons of its predecessor into the real worlds of people whose job it is to face deadly force encounters. Both are useful tools that may appeal to different tastes. 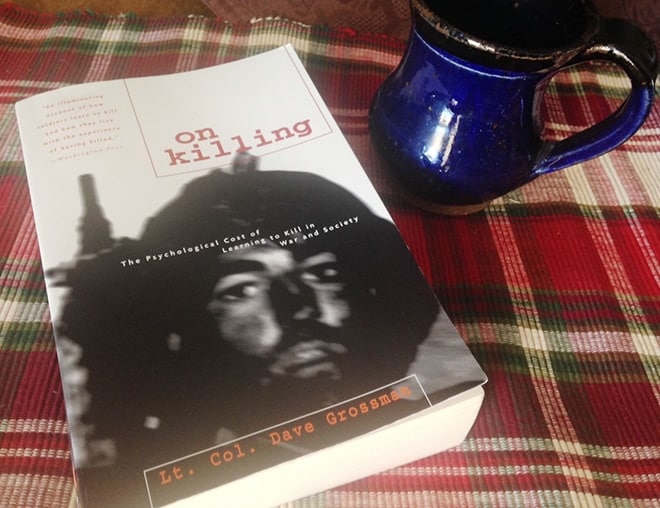 On Killing recounts the lessons of history, sometimes ancient history (think Alexander the Great). It displays in exquisite literary detail, a wealth of data on exactly how humans, mostly humans at war, have planned, executed, and responded to the act of killing on behalf of society.  It even addresses the lessons we learn from hunting game, and from the observation of predator animals, through multiple filters of survival, to cultural mores, and everything in between.

Though the data covered is long enough to pave a marathon route, it’s not dry. Grossman provides interesting, sometimes gut-wrenching, anecdotes to exemplify the numbers.  Beginning with Vietnam veterans, many of those anecdotes are first-person accounts from his own recorded interviews.  It is from reading this book that we find that Grossman isn’t the author, only the recorder, of the “sheepdog concept” for which he is often given primary credit.  That parable/philosophy (including interpretations of it, in varying degrees of quality) is now available in many other places, so I’ll not give it space here.

On Killing gets to the very core of some of the notions that people of every background and every political stripe have questioned, espoused, or denied.  Among those notions is the assumption that civilized people simply don’t, or can’t, kill.  It opens the chest cavity of the word “kill” and examines, with both brutality and tenderness, all the nauseating and/or thrilling associations folks have to it.  The subtitle of the book is the psychological cost of learning to kill in war and society, and Grossman, who is both former Army Ranger and psychologist, manages unlike any other non-fiction author to capture both the glory and pain of war so that the reader comes to understand the individual and cultural treatment of killing in a new way.  Grossman exquisitely navigates the material with compassion and an apolitical voice that is rare in any media today.

Thanks in no small part to veterans like the ones Grossman interviewed, my life has thus far been free of the direct experience of war.  It’s no exaggeration to say that On Killing changed my life with its insights to what killing has, and could, mean to me as a person interested in self-defense.  The extremely broad territory covered in this book offers opportunities for reflection on both societal and personal values.  My path has been made clearer thanks to this book.

By the way, I “read” this book on CD during a time when my job had me driving daily.  Grossman himself narrates, a great advantage as points are emphasized just as he intends. Of the two books, this one was a great start for me, having a background in developmental psychology and public health.  (Notwithstanding that On Combat was yet to be published at the time). 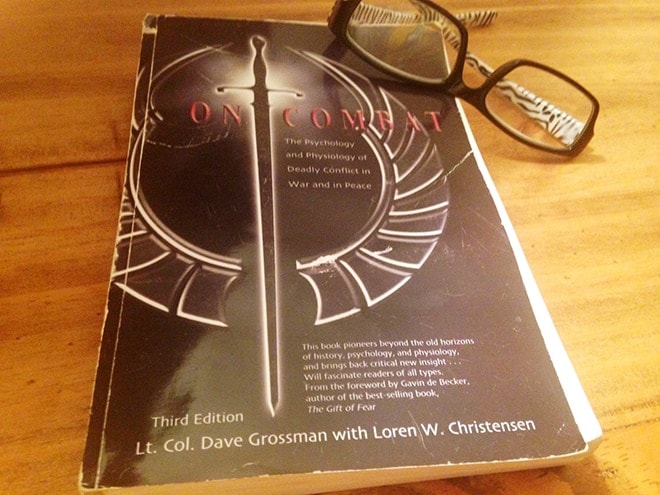 Author’s worn copy of On Combat, the “how” to On Killing’s “why.” (Photo: Eve Flanigan)

On Combat will appeal to folks who are more into action than backstory.  Each book does cover some of the same territory.  However, On Combat makes use of more current examples of crime and conflict, often involving law enforcement, one or a few officers at a time, and not troops by the thousands as are often referenced in the predecessor book.

On Combat offers a more personal look at “combat,” a broadly defined concept that applies not only to law enforcement, but to anyone who has made the mental decision, accompanied or not by other preparations, to not be a victim of violence, and/or to step into the gap between a violent criminal and an innocent party.  It provides information about the spectrum of expectable, sometimes unavoidable physical and psychological sequelae that unfold during and after a deadly-force encounter.  True to the first book’s form, memorable, real experiences are recounted to accompany every concept—making the book truly practical as its lessons are thus easy to remember.

Both of these books are good reading, even for the non-gun owner.  Obviously, I’ve given more space to On Killing because it was the first I picked up and the concepts therein literally changed my life.  By the time On Combat came home with me, there was nothing so new it was surprising.  But it did lend a lot of practical advice that I use today. On Killing showed me the “why,” and On Combat was the “how” of being a basically peaceful person, capable of and willing to use deadly force when necessary.

Anyone doing good work is going to develop enemies. Grossman is no exception.  Here are my two cents:  the science he relies on to draw conclusions isn’t based on the scientific method, but epidemiology and sociology.  The scientific method doesn’t readily lend itself to this kind of learning, but Grossman does include the couple of landmark human behavior experiments that are common knowledge to any student of human development.  He cites historical data sets that number mostly in the thousands, if not tens of thousands, and that is a very good indicator, scientifically speaking, that his observations are valid.  Through the use of veteran interviews, many questions of why the data appears the way it does are answered, perhaps not completely, but there is virtually no scientific conclusion that applies all the time to every human being—even the law of gravity has areas of exemption, though they’re a bit inconvenient to visit.

Having explored the arguments of one of Grossman’s most vocal critics, I find no new data to substantiate controversy, rather, there’s an apparent agenda to push a philosophical approach to the subject as it affects law enforcement that is, in some ways, different than Grossman’s.  One must wonder, if these critics’ approach is superior, where’s the documentation of them having put it into practice, measuring the results?  People who have good things to prove rarely have time to grouse. 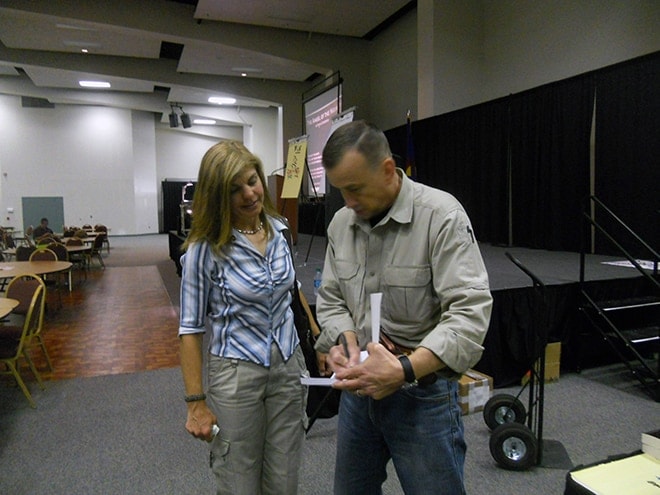 Like any true scholar with a social conscience, Grossman himself has grown beyond these milestone publications, expanding his interests and audience to encompass topics like mass murders in schools, the effects of exposure to violent media on children, and developing the “sheepdog” mindset and lifestyle in the civilian sector.  I find it no surprise that, at a time (2012 to be exact) when federal authorities’ advice to school personnel and children was to hide in the face of one intent on killing them, Grossman was sharing the story of Matthew LaPorte—the ROTC student who rushed the 2007 Virginia Tech killer—and decrying the fact that if even one other student had taken some kind of action, perhaps the tackle would’ve stopped the action and thus lowered the body count.

Two-thousand fifteen marked 20 years since the publication of On Killing. The ensuing, though slow and reluctant, embracing of at least some “sheepdog” behaviors by state and national authorities is perhaps underway.  At least some of our national and state leaders are coming to realize and teach, however sheepishly, that sometimes, good people must fight and perhaps kill in order that evil not prevail.

Reading these books helped me clarify where I stand on certain moral and veterans’ issues.  They showed me, without any nagging about what I should or shouldn’t do with the knowledge, what to expect and where my weaknesses lie with regards to readiness for self-defense or defense of a loved one.  For these lessons, I’m grateful.