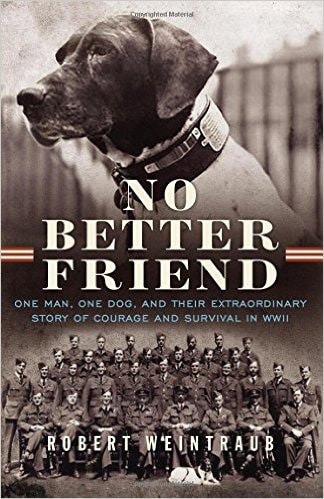 No Better Friend centers around the life of an English Pointer named Judy who is adopted into the British military during WWII, becoming both a mascot and friend to the troops aboard Brit gunboats.  After many early military adventures, Judy crosses paths with Flight Technician Frank William in a Pacific internment camp and their time together defines both of their lives. While Judy never developed a penchant as a hunting dog, her forte and legend grew in a far more historically important area.

Though the story of Judy—the only official canine POW of WWII—has been told before in both historical record and another book released less than a year before, Weintraub’s talent for historical storytelling embeds readers amidst the fears and smells of internment camps and her attention to detail and research into the experiences of POWs in southeast Asia gives special credence to her narrative.

The tagline for this book is “one man, one dog, and their extraordinary story of courage and survival in WWII,” and quite a story it is.  Without heading into spoiler territory, William and Judy the dog risk their lives for one another, lending hope in the darkest of times. Weintraub weaves together the stories of man and animal with a blend of history and morality that comments on the horrors of war, the strength of the human spirit and the animals with whom we form life changing relationships. How both man and canine survived years of war atrocities together is nothing short of amazing.

This is perhaps one of the most little-known but most heartwarming stories of WWII.  The book sells at Amazon in hardcover for $20.97, paperback for $16.99, and Kindle for $14.99 and includes a center section of period photography, putting faces—both human and canine—to those in the book.

Author Robert Weintraub is best known as a sports columnist and contributor to publications like the NY Times and Slate.  He has published two previous books, The House that Ruth Built and Victory Season: The End of WWII and the Birth of Baseball’s Golden Age.

We at Guns.com like to review books that might interest our readers. While this story is not necessarily tailored specifically for gun lovers and shooters, it is an interesting historical perspective of a small slice of war that we think most gun owners will appreciate.  It is also a must-read for dog lovers, war historians, and anybody in need of a genuinely heartwarming true story.