From picking up Glock: The Rise of America’s Gun, journalist Paul M. Barrett’s latest book-length work, you might not be sure what to expect. Academic treatise on America’s gun culture through the lens of the Glock pistol? Biography on Gaston Glock, the gun’s designer and manufacturer? Or an examination of gun laws and violence involving the Glock? 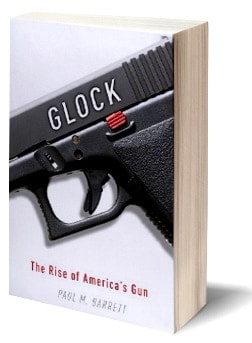 Turns out that Barrett weaves all of these and more together in an expansive and in-depth look at a pistol that has come to stand for gun in American culture. We Xerox something or reach for a Kleenex or, in this case, draw a Glock. As Barrett argues, “Glock is the Google of modern civilian handguns: the pioneer brand that defines its product category.” And he never stops successfully reinforcing that point.

Barrett intelligently opens the book, not on Gaston Glock as curtain rod manufacturer in Vienna, but with a vicious gun battle in Florida devoid of the titular firearm. Starting with the vividly retold scene draws you into the narrative and subject matter if not necessarily the book’s subject. This spark of action, what Barrett calls “The bloodiest day in FBI history,” sparks also a search on the part of the FBI for a better gun. For that, Barrett winds back the clock, beginning the process of weaving together America’s gun culture, Gaston Glock’s start and evolution as gun maker, and the way the two come to affect and feed each other.

He captures not only the evolution of the Glock company but the change in the man himself, Gaston Glock, from conservative, middle-aged manufacturer to jet-setting, paranoid, international multi-millionaire. From the start of Glock onto the firearm stage, he seems peculiarly American (though I’m doubting that Herr Glock would look too kindly on my analysis); he seems like sort of an old west individualistic, entrepreneurial capitalist. And he is that, in a way—intelligent, capable, and extremely hard-working. He doesn’t remain with that particular image, in the book’s narrative anyway, for very long just as the gun itself goes from unknown to ubiquitous. In just over twenty years, the Glock went from fresh Austrian import to sitting on the hips of well over half of America’s police officers.

Buried in this book is a lesson for anti-gun activists as well: you’re best efforts at minimizing gun ownership, largely, not only fail to work, but usually have the opposite effect. Those people stoking the flames against the Glock, and Barrett goes through a laundry list in the few decades of the gun’s existence, provided nothing more than free advertising and assistance in sparking a buying frenzy. The Brady Bill is a perfect example that the book covers, which did little more than allow for easy manipulation by gun companies to sell thousands of guns right up until the deadline and then re-sell previously manufactured guns grandfathered in.

Just because Barrett establishes the ineffectual nature of the legislation is not to say that he overtly takes sides in the matter. For the most part, he carefully walks a cool journalistic line throughout the book, pointing out issues on both sides of the debate and oftentimes following a course rooted in facts and studies. For instance, he is quick to dispel and revisit the idea of the Glock as the street-criminal’s gun. Rather, the Glock is the law enforcement’s gun if anything. Though, Barrett also establishes a pattern of handguns with high capacity magazines, which Glock played a crucial role in developing, used in mass-killings such as the Virginia Tech or more recent Tucson shootings. Both killers used a Glock.

The book spends plenty of time on America’s gun culture, establishing that connection between the plastic pistol and its popularity. As Barrett illustrates with an analogy involving cars, “Wheels and firepower—representing adventurousness and machismo—are seen by many shapers of popular culture as essential American characteristics.” Quite simply, the Glock succeeded here simply because it was America: a place that loves its guns. At times Barrett seems to drift from his focus of the Glock as it rises to become America’s gun, such as when he moves deeper into the intricacies of the Glock company. But it’s precisely this choice that helps round out the book and keep it from being either too academic or one-sided.

The roundness of Barrett’s analysis, as well as its depth, allow Glock: The Rise of America’s Gun to appeal to a wider audience. And appeal it should. The story has it all: corporate intrigue, an assassination attempt, international corruption, amorous quibbles, and, of course, lots and lots of guns.