Book Review: 'The Illustrated Encyclopedia of Weaponry' by Chuck Wills 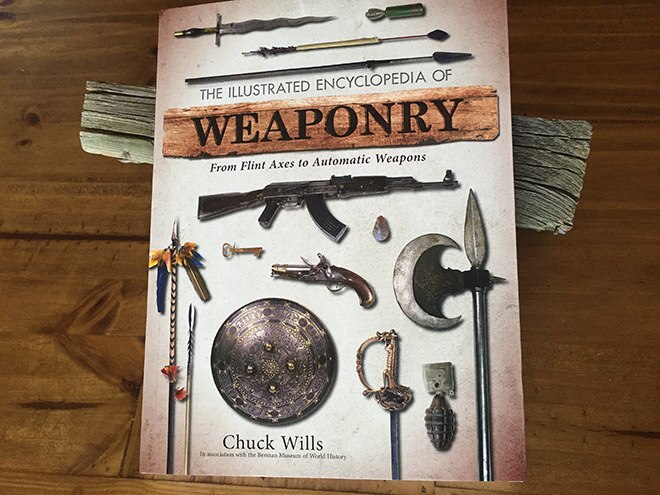 The Illustrated Encyclopedia of Weaponry: from flint axes to automatic weapons by Chuck is on sale now for $19.99. (Photo: Eve Flanigan)

A new book by Chuck Wills, in association with Berman Museum of World History in Anniston, Alabama, is The Illustrated Encyclopedia of Weaponry: from flint axes to automatic weapons. It was provided to Guns.com staff for reference and review by the author’s publicist. 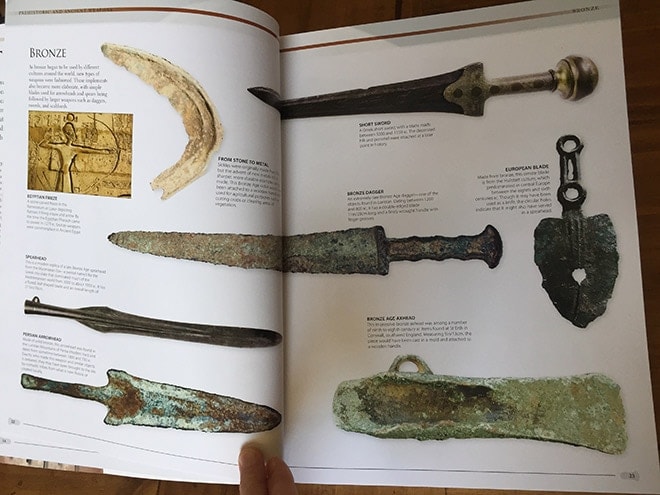 In 320 pages, the reader is taken from the origins of man in the Stone Age, all the way to modern times. The journey is enhanced by striking, richly detailed photographs on nearly every page.

History is broken into five major segments, with subsections covering specific regions of the world. A simple review cannot replace the experience of perusing the pages, vicariously witnessing the struggles of humankind to obtain and protect food, land, souls, and security. This review will share some highlights in an attempt to communicate the flavor and visual stimulation the book provides.

One point of interest is the transition from crude tools made of stone with wooden handles. The discovery of copper in China and the eastern Mediterranean region, around 3,500-3,000 BC, and the advent of the Bronze Age in Europe circa 760 BC, drove the first wave of weapon innovation. The addition of metallic sockets, sometimes pinned, to the inherently weak stone/wood juncture made weapons stronger and more durable. Metals also marked the beginning of weapons as status symbols. Ornate engraving marked the weapons of high-ranking leaders. 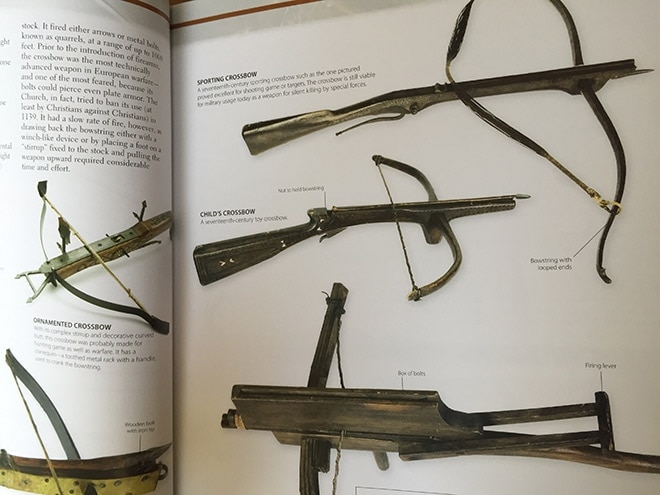 A few pages are devoted to the many interpretations of the Medieval mace. Swinging one over one’s head in order to smite the enemy was a tactic used by knights in full armor with otherwise limited mobility. It was also the tool of the “fighting clergy,” whose canons prohibited bloodshed.  The mace handily killed without external indicators — the historical version of a bar of soap in a sock, a favorite of prison inmates. The mace quickly passed from a weapon of warfare to a ceremonial symbol. One is currently poised, for example, on the desk of the official presiding over British Parliament. From footage I’ve seen of Parliamentary brawls, it’s a wonder the mace hasn’t been put to more than ceremonial use. 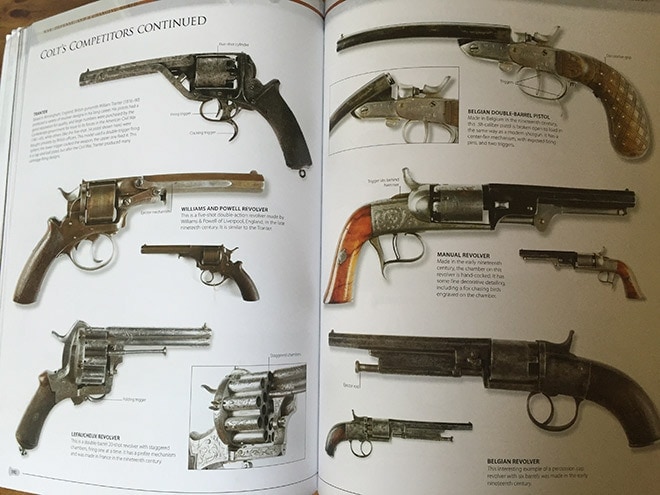 No discussion of Medieval weapons would be complete without covering armor. A few pages of incredible photos show real and symbolic armor from around the globe, including the hat that clearly inspired Mel Blanc in his creation of Marvin the Martian. An extensive section on bladed weapons gives particular attention to Asia and Asia Minor, from which an untold array of deadly, often beautiful, blades of every length emerged.

The Early Modern Warfare section, covering 1150-1850 AD, covers the rise of firearms as a primary battle weapon. Significant to gun fans is the Hundred Years War between France and England, 1337-1453 AD. The Battle of Castillon in 1453 marked the first time firearms were used effectively in battle. The defending French used a rampart gun for wall defense fired via remote control—i.e. a long piece of string. Also during that war, crossbows lost out to the dated but much quicker to reload long bows. It was during this era that serious naval warfare emerged as well. 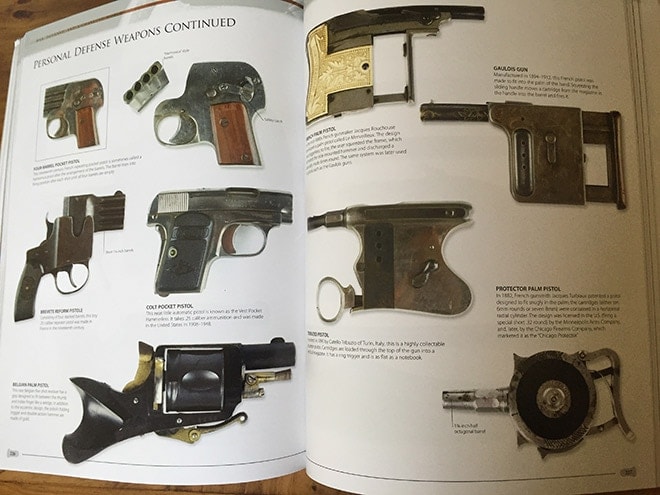 A look at old personal defense guns is a reminder, there’s really not that much new under the sun. (Photo: Eve Flanigan)

The final section is on Modern Warfare beginning with World War I. Some interesting segments here include weapons of deception and espionage, e.g. cane and umbrella guns, not typically considered in a summary of the tools of war. This section contains a picture and quote from Mikhail Kalashnikov, whose legendary creation entered production in 1947: “I wanted to invent an engine that could run for ever [sic]. I would have developed a new train, had I stayed in the railway. It would have looked like the AK47, though.” 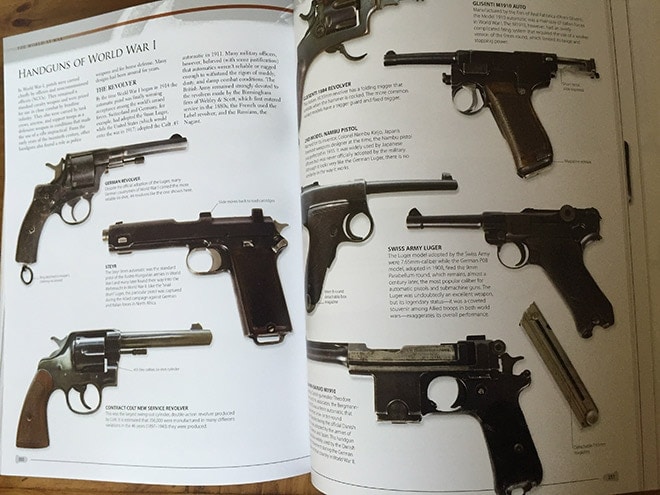 There’s very little missing from the Encyclopedia. However, as I read, I was wishing for discussion of a few other aspects, one being improvised weapons. The historical documents of corrections services would have filled that gap. There is also no reference to blades or guns as instruments of sport or recreation.  The book views them solely as historical and artistic artifacts.

I did find amusement in the colored-grip “ladies gun” in the personal defense section.  Seems like gun makers have been trying to please women for nearly 100 years. 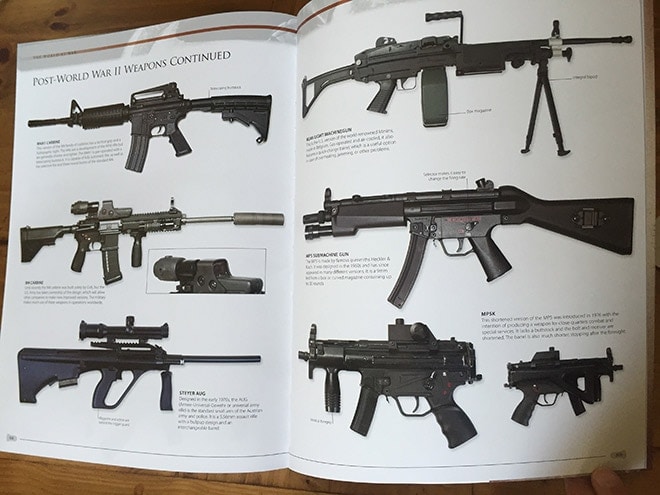 A collection of rifles that will be familiar to fans of the gun. (Photo: Eve Flanigan)

The Illustrated Encyclopedia of Weaponry is suitable for every audience. Though focused almost entirely on war-related aspects of weapons, the brutality of war is only mentioned in a sterile manner. There’s no discussion of wound characteristics, no focus on death tolls.  The few photos of humans are mostly posed, with little to no indication of violence. The authors avoid use of the annoying, politically correct “BCE” in date references, something I really appreciate.

This is a coffee-table book, but as it’s currently only available in paperback, the binding doesn’t do justice to the quality of the collection inside. One advantage of the format is a place-holder flap on the inside of each cover. At $19.99, it’s an easy choice for personal enjoyment or as a reference for a child preparing an elementary-level history report.