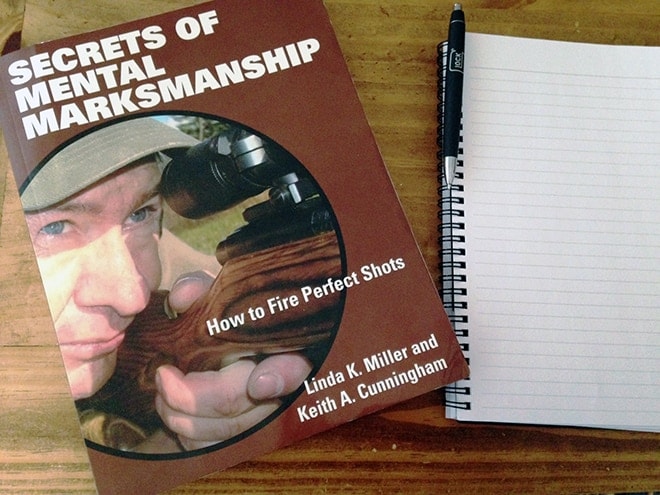 Virtually every sport has at least one performance psychology manual.  Firearm use is, of course, sometimes a sport—three gun and all the various competitions known by acronyms, i.e. SASS, IDPA, IPSC and so on. These sports demand accuracy, speed, and usually some degree of athletic prowess. Secrets of Mental Marksmanship: How to Fire Perfect Shots (Paladin Press, 2010) reminds the reader that performance demands are made of other shooters as well—whether it’s the infantryman on a mission with a rifle and sidearm, the police officer on patrol, or hunter in search of a trophy or dinner.

Authors Linda K. Miller and Keith A. Cunningham define mental marksmanship as the process of improving the probability of having a consistent mental performance, under pressure, and on demand. They take on the weighty task of teaching readers how to use subconscious and conscious processes, as well as self-image, to improve shooting, whether that shooting is recreational, competitive, or operational in nature.

This book can be read two ways: slowly, as a manual for refining one’s habits in order to perform better, or skimmed, either to pick up tidbits of wisdom from the motivational quotes peppering the sidebars, or to take in a few of the 128 brief, real-life tales… one military, one law enforcement, one hunting, and one competition story per concept. 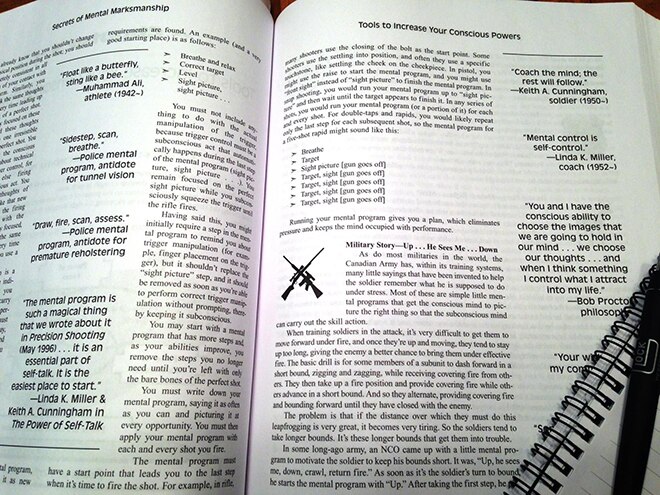 Secrets of Mental Marksmanship takes the mystery out of getting into the “The Zone.” (Photo: Eve Flanigan)

The authors surely intended that the book be read the first way. They break down performance into its essential mental components, challenging the reader to examine and change the way they talk about their shooting, not only socially but even self-talk which, unless a person has developed a positive psychology outside of their shooting life, is probably a stream of non-stop criticism, which is damaging to performance. They give techniques for conditioning the conscious and subconscious aspects of the mind. The stories at the end of every section show how the principles served people in real situations.

It’s not only mental processes that are covered. The benefits of methodical planning and organization, like a sniper’s log or a competitive shooter’s daily dry-fire drills, are explained in detail with numerous examples. Throughout the book, the reader is encouraged to identify helpful and not-so-helpful patterns of communication in the team and/or coach/student culture, and to do what is possible to mold one’s social environment to enhance performance-building communication patterns.

Secrets of Mental Marksmanship takes the mystery out of getting into “The Zone,” that seemingly undefeatable way of being for which high-performance athletes are held in awe. It’s a state available to anyone willing to put in the work of reprogramming ingrained, unhelpful ways of thinking and behaving…something that spills over, conveniently or not, into life outside of shooting.  It’s an innovative effort by these authors, themselves expert shooters, to bring psychology to the shooting world.  It’s a shame Secrets of Mental Marksmanship hasn’t been more popular since its 2010 release. I confess I’d have paid no attention to it had it not been personally handed to me by author, psychologist and former Army Ranger Lt. Col. David Grossman, with the glowing recommendation: “as a shooter, this is the best book you can read.”

As in any other diverse field, gun owners tend to enter silos of identity as, say, collectors, hunters, tacticians, and so forth. It’s a topic eloquently addressed in a video by Colion Noir. It’s also likely why this book isn’t a huge hit.  Sports psychology can get personal, and the task of self-improvement is made less comfortable standing in a big room with folks you don’t completely identify with.  In this regard, the book is way before its time.  It’d probably be more palatable if the same information were presented in a series of smaller books tailored to each sub-group.  An updated edition of the policing aspect of this book, in this reviewer’s opinion, would include new anecdotes reflecting the spectrum of considerations faced by officers in an age where ingrained political correctness and domestic terrorism can arise in a single incident. Perhaps another brand new edition would focus on civilian/concealed carry examples from workplace, home, and community settings.

Secrets of Mental Marksmanship: How to Fire Perfect Shots contains timeless lessons.  It might hold the key that turns the lock between your current and desired performance as a shooter.  Check it out from the publisher or other booksellers.