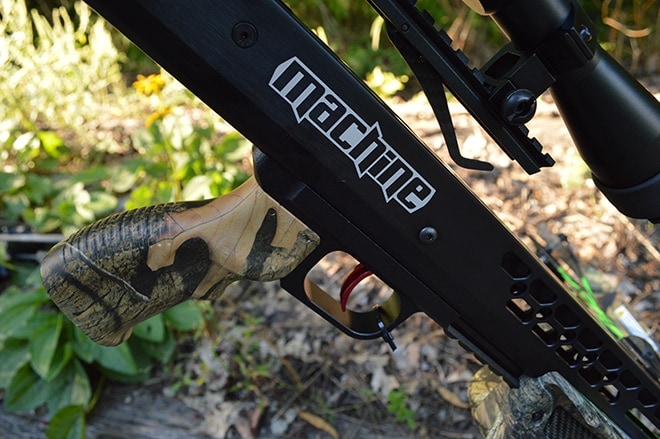 Killer Instinct in and of itself is a new company that has quickly positioned itself on the cutting edge of innovation in the crossbow market.  But Killer Instinct is no stranger to the hunting market; in fact, they are an offshoot of HAWK Hunting, well known in the world of treestands and like accessories. 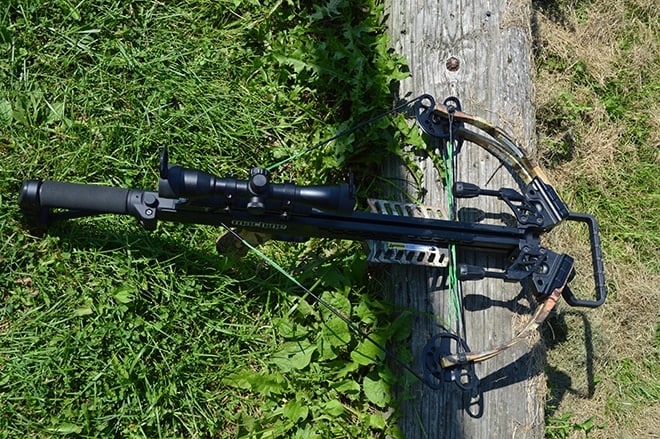 With headquarters in Frankenmuth, Michigan, the partner company’s mission is “pushing the boundaries of design and engineering to the next level,” and that’s exactly what Killer Instinct does with their products.  The Machine comes with a limited lifetime warranty for the original buyer, and all Killer Instinct bows go through rigorous testing with one bow from each batch being pulled and cycled at least 5,000 shots.

In addition to the new-for-2015 Machine, Killer Instinct also makes two other models: the 350 and the 365, each referring to speed and priced at $449 and $549 respectively.  All three models are sold primarily through specialty archery dealers, though the Machine is scheduled to be available at Cabelas. 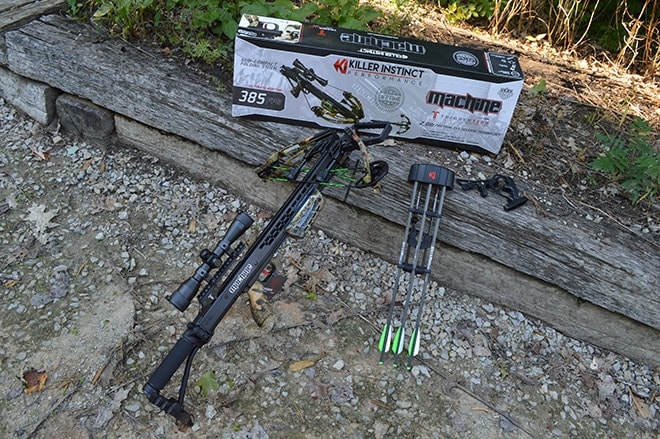 Inside the cardboard sleeved box, buyers will find what Killer Instinct labels “the first ever sub-compact crossbow.”  The Machine is built with an all-machined Flip-Tech stock that functions with the push of button, putting total bow length just over 25 inches. There’s also the highly anticipated Trigger Tech zero-creep, two-pound frictionless pull mechanism.

With a power stroke of 14.5 inches and draw weight of 185 pounds, the Machine is rated to fire crossbolts at 385 fps, making it one of the faster bows on the market. The unfolded length is 34” and width measures 14.5” and 18.5” cocked and uncocked, respectively.  The Machine comes dressed in Mossy Oak Infinity camo and weighs in at seven pounds. 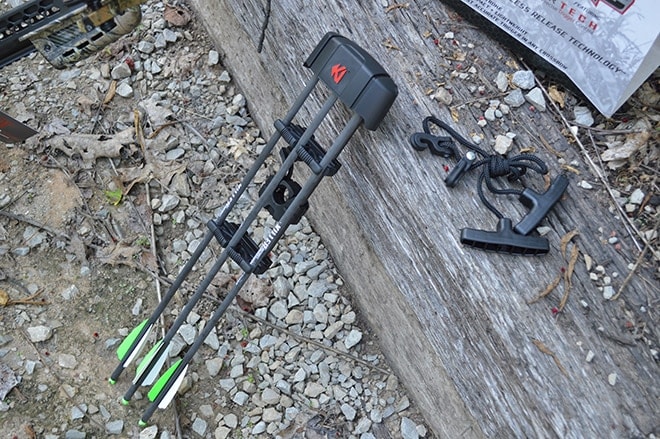 Included quiver by the G5 company, one of the biggest names in the archery accessory industry. (Photo: Kristin Alberts)

In addition to the 4×32 red/green illuminated optic, the package also includes a 3-bolt quiver by the quality archery company G5, three Killer-Tech 20” carbon crossbolts with Bohning vanes, 100-grain field points, a rope cocker, rail lube, and all the necessary wrenches.  The package retails for $849, with local prices around $799. 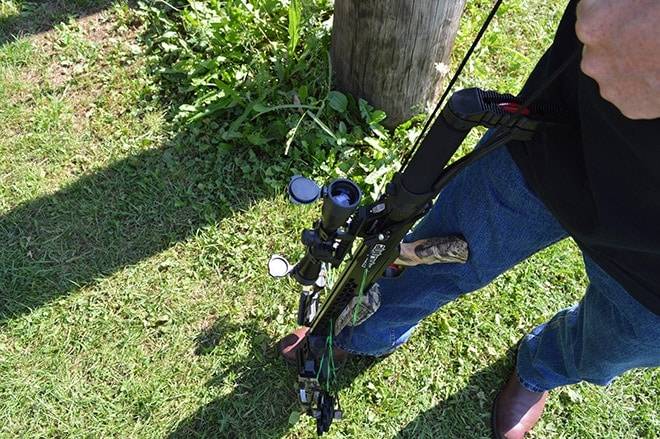 Rope-cocking the Machine requires some strength but the payoff is worth it. (Photo: Kristin Alberts)

The Machine’s tang-mounted, sear-blocking safety is both quieter and more easily accessible than what we’ve found on the majority of competitor bows.  The safety automatically engages upon cocking, helping prevent accidental dry fire; in addition, Killer Instinct’s “Sure Safe” system ensures the bow cannot fire without a bolt in place.   Front and rear picatinny rails make adding accessories a snap.  The forward grip with its integral finger guard not only fits the natural contours of the hand, but can be adjusted along the full-length tactical front rail to fit any user. 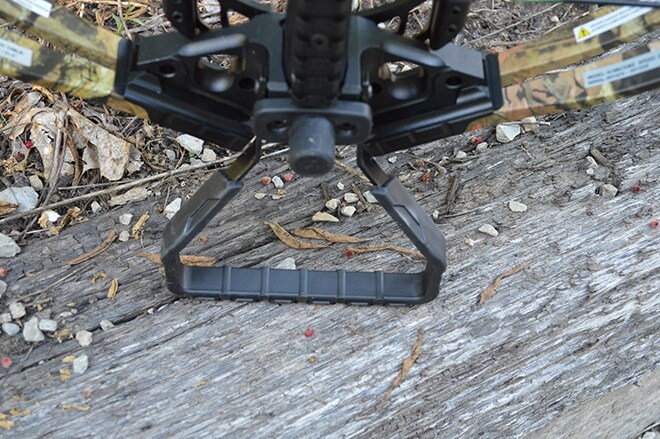 The Machine is simply a well-built workhorse of a crossbow.  While many makers are cutting both cost and weight with polymer components, Killer Instinct is machining with metal, including the extruded aluminum flight rail.  They send the more desirable carbon fiber arrows and a quality optic of their own manufacture.  The Machine also comes standard with a Deadening String Suppressor Kit which reduces noise and vibration and is fully tunable. 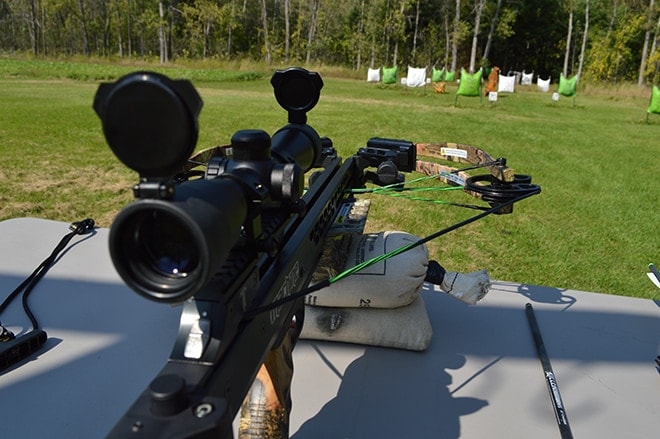 While we’d all prefer a completely made-in-the-USA product, the Machine is assembled in the US with parts made in Taiwan.  The company, however, is built of pure-Midwest hunting-minded people in Michigan.  They are engaged with both their products and the hunting industry and are easy to reach by phone, email, or chat.  My local archery shop has trouble keeping the Machine in stock due simply to the quality-build of the brand, as large-scale name recognition is yet (soon) to come. 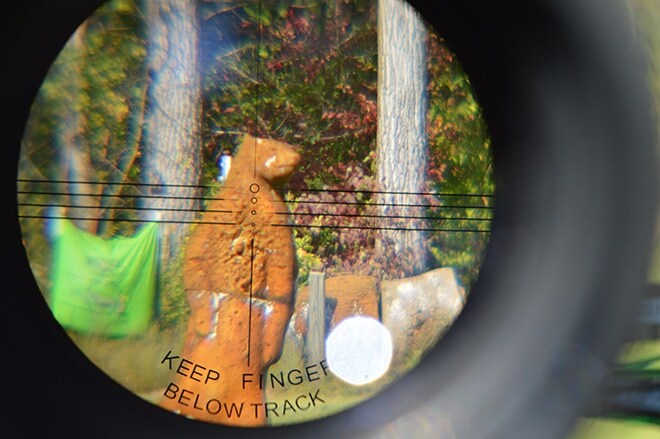 At 185-pound draw and 14.5 inch power stroke, the pull is stout even with the rope cocker, but certainly not unmanageable.  I’m a 5’7” woman and I rope-cocked the bow at least a dozen times during the first range session.  Each of our shooters handled it fine, with my biggest difficulty being the final inch of pull at mid-upper-torso height.  The large and aggressive foot stirrup gives an exceptionally solid mount, but because of its length, it adds an additional 3.5 inches between the bow and the ground.  While the pull may deter some users, don’t let that keep you away from the Machine.  While there’s not currently a crank or draw-assist device on the market for the Machine—there are for KI’s other two models—the company assures us that such device is soon forthcoming. 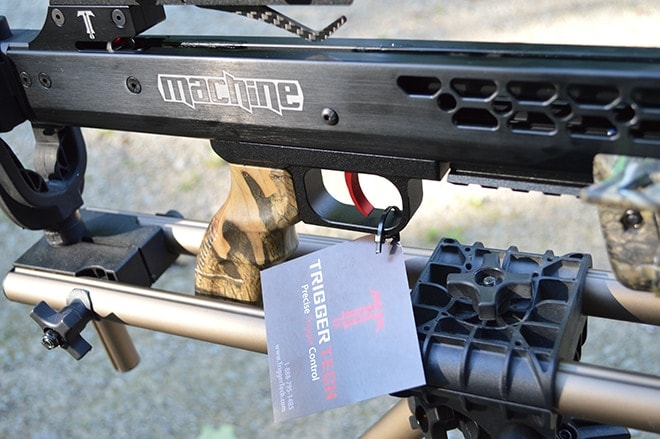 The pièce de résistance on the Machine is certainly the Trigger Tech two-pound frictionless trigger.  In the current crossbow world where horrendous triggers are commonplace, Killer Instinct’s is hands-down the best and that includes trigger time with the best in the business including Scorpyd, Carbon Express, Ten Point, and the like.  We tested the trigger on a Lyman trigger pull gauge and it was dead on at two, crisp, and sweet.  A quality trigger like that makes even an average shooter more accurate. 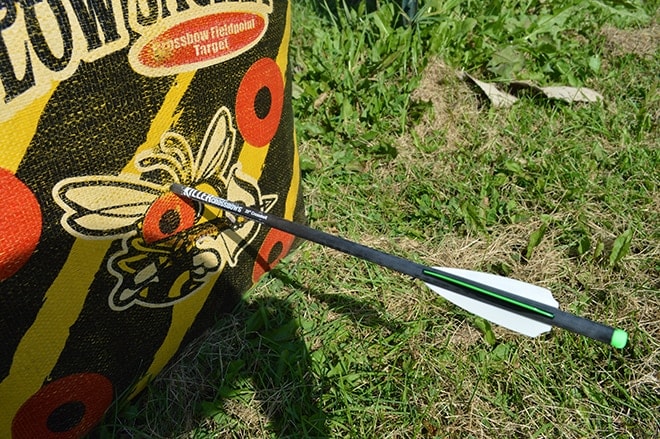 Shot groupings with the included crossbolts exceeded expectation, with some of the most uniform examples of penetration at any given distances.  The optic reticles are very user friendly, and when sighted in a half-inch high at 20 yards, the secondary compensating centerpoints put us quickly on target at 29, 36, and 48. 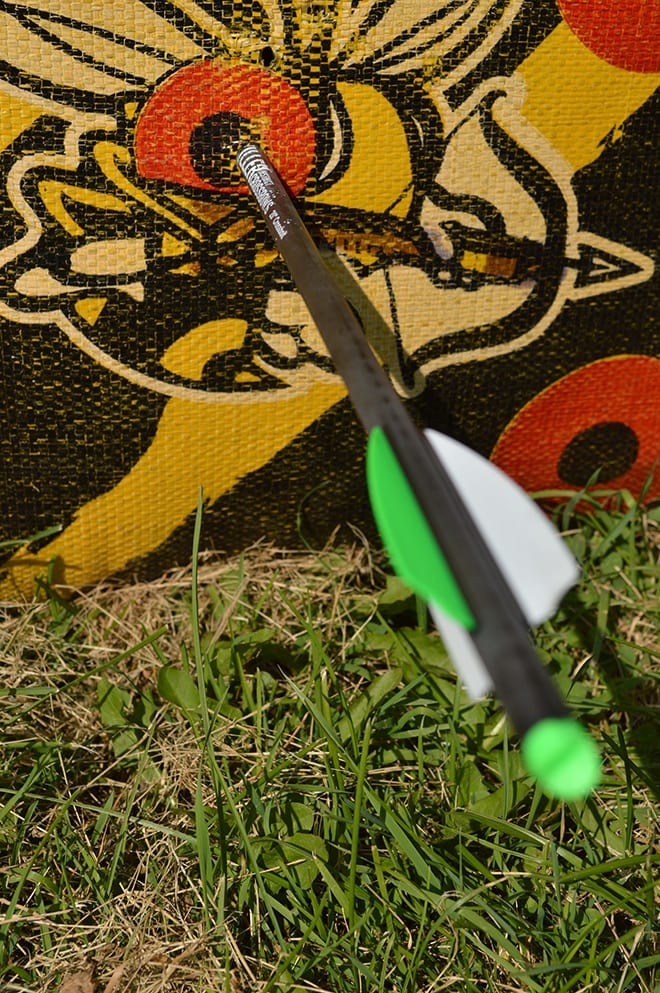 Though we don’t advise hunting at ridiculous distances, we did shoot the Machine out to 75 yards with considerable accuracy.  We even lost one of the bolts to a “robinhood” at 40 yards, whereupon one arrow splits the previous one—the truest testament to accuracy.

The only disappointment with the bow—quite a stretch to find one—is that the Machine cannot be cocked or fired with the stock in the folded position.  It would seemingly be simpler to cock when folded, due to the additional leverage.  The side-fold—which locks up tight, albeit loudly—certainly makes it more convenient for casing, carrying, and maneuvering in a tight quarters. 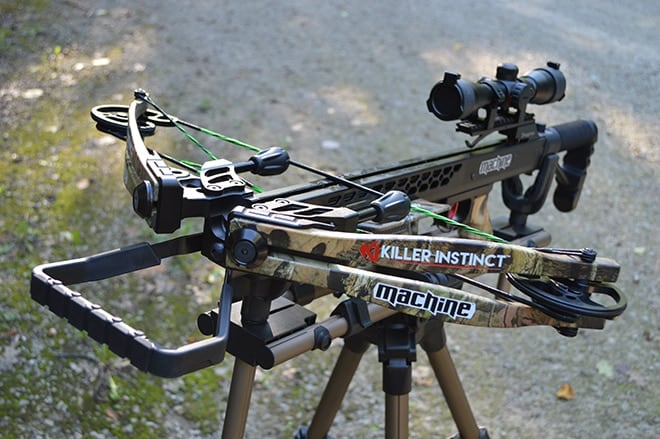 Gun hunters take notice—the Killer Instinct Machine caters to your desires.  Now is the time to familiarize yourself with a wonderful new company and take advantage of upstart pricing for product quality and features that far exceed price tags.  Killer Instinct is quietly flying off the shelves at local archery shops.  If they keep building equipment of this quality, there’s no doubt they are here to stay.