As I’ve said before I tend to prefer my 1911s as John Moses Browning intended: in .45ACP. Unless a gun is properly re-engineered for a different cartridge, it just feels “off” to me. The Springfield EMP was the first such re-scaled pistol I liked, with everything shrunk to about 85 percent of the size of the original M1911 in order to accommodate either a 9mm or .40 S&W cartridge.

The Browning 1911-22 Compact is another such gun. It honestly surprised me to discover that this is so. But I’m getting ahead of myself. 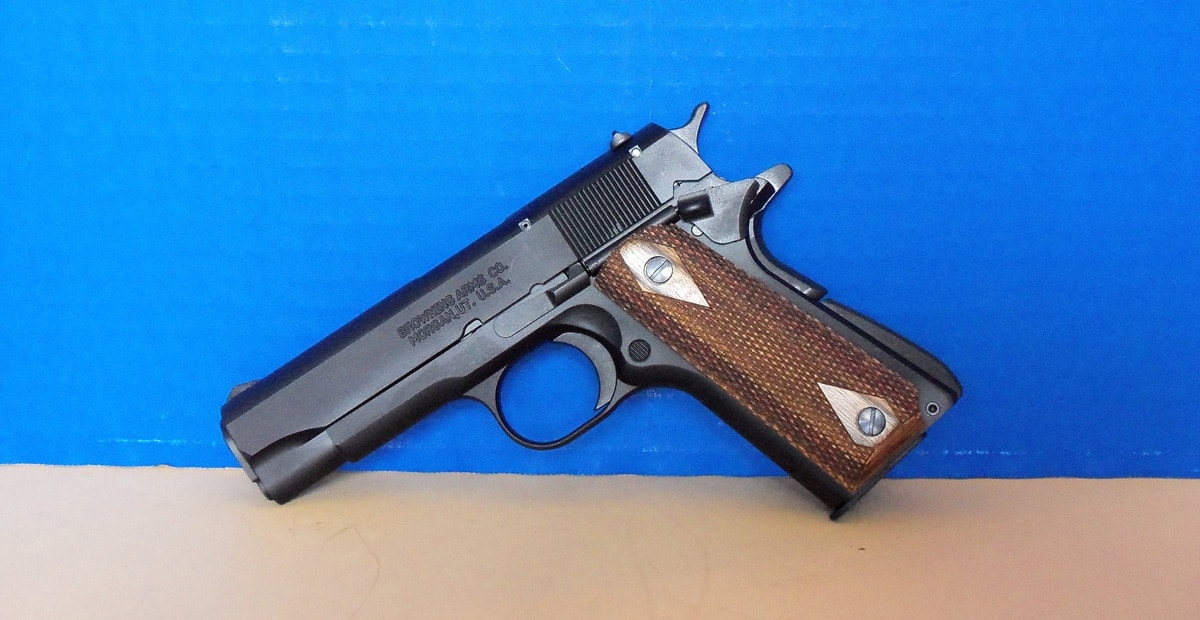 Browning took the smart but more controversial path in designing their gun around the scale of the .22 LR. The gun is indeed at 85 percent scale of the standard M1911, with everything (except the trigger guard) being shrunk down. The frame and slide are also made of aluminum alloy, so the weight of the gun, which is just under a pound, is also scaled down to be more suitable for the smaller cartridge.

What this means is that while the gun is smaller, it actually feels very much like a Commander-sized 1911 when you shoot it in terms of operation and even recoil. Gone is that odd sensation you get when shooting a standard 1911 which has a .22 conversion kit, where there is little or no recoil and things seem to operate slightly slower than normal.

This is patterned after the original 1911. That means very basic fixed sights. A small beavertail. Grip and thumb safeties where you expect them. Mag release where it belongs. Clean, straight, GI-style lines and proportions.

And these elements aren’t just cosmetic. The Browning 1911-22 breaks down just like a standard 1911 does, and the components are all where you would expect them, and function like they should, even though the action is direct blowback.

In terms of quality — well, it’s what you would expect from a major name manufacturer. Fit and finish were fine, everything was tight and well made inside and out. The matte-blued finish was better than I’ve seen on many aluminum alloy guns. 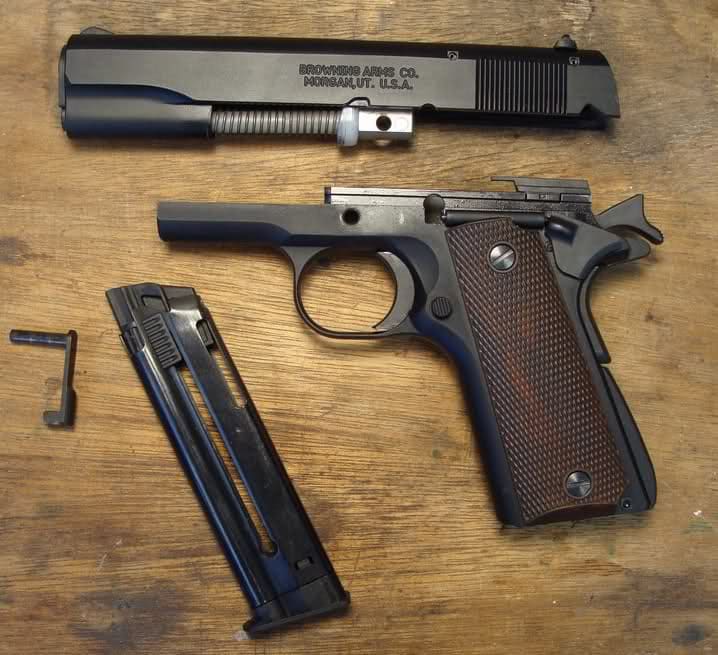 The Browning 1911 Compact breaks down just like any other 1911, meaning it’s difficult. (Photo credit: Kahr Talk)

The first thing to note is that the magazine has an interesting little change from being just a scaled-down 1911 mag: to accommodate the rim of the .22 LR cartridge, the sides of the magazine are partially open, and there’s a pair of finger grips that allow you to pull down the follower. This makes loading easier, and the .22 cartridges do a slight stagger back and forth, with the rim extending out to the side. This very neatly gets around the ‘rim-lock’ problem that some semi-auto designs run into. The magazine holds 10 rounds. 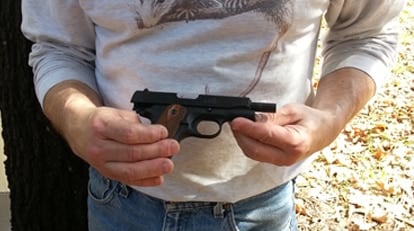 Inserting a loaded magazine into the pistol allows you to rack the slide and chamber a round, just like any 1911. There is a magazine safety (the gun won’t fire without a magazine in it), and the slide locks back after the final round in the magazine is fired.

I noted that shooting the little Browning 1911-22 is very much like shooting any full-sized 1911, which surprised me because I’ve shot plenty of 1911s with a .22 conversion kit, so I can tell the difference. In addition, this is a fine way to practice with a 1911 using inexpensive ammo, but, again, .22 is a lot different from a .45, you may have noticed. That’s because even with a lighter recoil spring and matched barrel/light-weight slide assembly, the recoil is different due to the size and weight of the rest of the 1911 frame. The Browning, on the other hand, has the same balance and replicates the shooting experience of shooting a .45ACP. It’s a little thing, but one which each one of my friends who have tried it noticed right off the bat.

Another thing — this gun (which was brand new, hadn’t been fired) had no problems with any of the ammo I fed it. Even with Thunderbolts, which is one of the .22 LR brands that seems to be most problematic in pistols in my experience. We didn’t have a single misfeed or failure to fire, out of four different shooters and a couple hundred rounds of ammo. And that’s shooting a combination of slow and rapid fire.

One thing to be aware of: because the gun is so small, guys with big hands need to pay attention to how they hold it. Oh, I didn’t have any problems at all, and the gun felt very solid in my hand. But with the small beavertail, it is easy to get bit by the hammer if you allow too much of the web of your hand to ride too high.

Particularly with the small, simple sights, none of us were trying for accuracy at range. So I won’t pretend to claim that I can say how accurate the gun is. But all of us were able to pop 6-inch metal targets out to 25 yards.

This gun surprised me — pleasantly. The MSRP is $600, and they’re currently selling for not much less than that. That makes it a pricey little .22 and is outside of what I would usually be willing to pay. But if you have deeper pockets, or really like the 1911 platform, I’d say that this gun is worth the coin. At the very least, if you get a chance to try one, you should.